Like Viktor said; ‘text book stuff’ – bridge up to the break where you have a teammate, recover a little once you are there, attack your companions when it becomes clear the attack will succumb, then ride the last 20 kilometres in solitary splendour. It sounds easy. Belgian Philippe Gilbert (FdJ) certainly made it look that way as he took a thoroughly deserved win in Het Volk on Saturday. 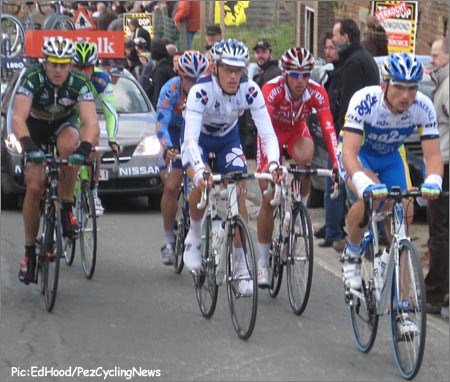 The break charges over the Berendries climb…

– followed soon after by the Quckstep led bunch.

Among those chasing him were world time trial champion, Fabian Cancellara (CSC), Norwegian hardman Thor Hushovd (CA) and Tour of Flanders specialist Leif Hoste (Silence-Lotto), but they could barely dent the minute they had conceded to the slim, big geared Walloone, hammering his white Lapierre back to Gent and his second win in this historic race.

Here’s a quick study in contrasts: note the fans around the QS bus, versus…. 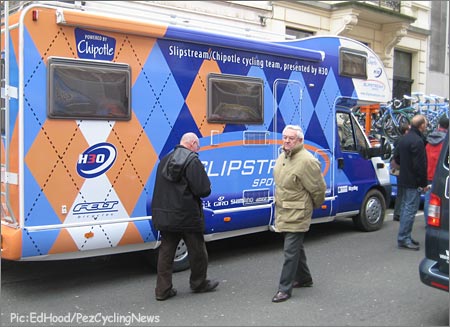 Speaking of Silence-Lotto and their blood rivals, the QuickStep clan, it was a disastrous day for both squads; at least Silence made a little noise (sorry) by having Hoste up there. Kuurne should see the chastened QuickSteps back to their best, let’s hope so (and boy did they answer in fine fashion). 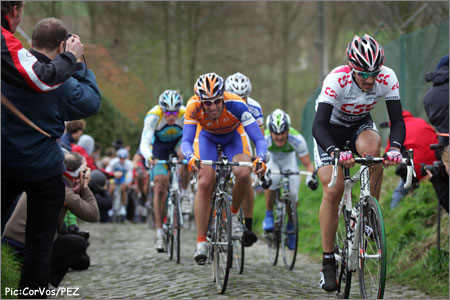 In our bar, the Nieuw Keiser, there was approval rather than joy at the win, Gilbert’s native tongue is French, not Flemish. It was better than last year in Chris Peer’s bar at Kruishoutem though, a lot of folks walked out when Pozzato won. 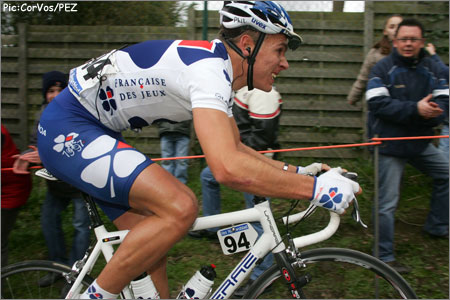 Het Volk is the first big race of the year, the first chance to see most of the big teams in the one place with their new strips and new toys. It’s also a good chance to see smaller but interesting teams who are in the race on wild cards. Viktor had dragged us up to the signing on and team parking areas, outside the six day track in Gent. 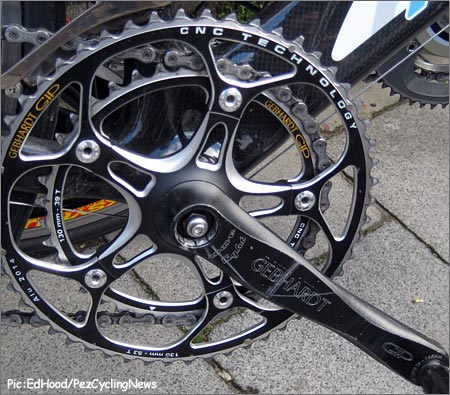 It was almost two hours before the start and the first team we saw was a long ways from home, CSK Whirpool, all the way from the Czech Republic. Their carbon Authors didn’t attract many onlookers, unlike the QuickStep Specializeds, which are gazed upon like holy relics by the crowds of pilgrims around the bus. 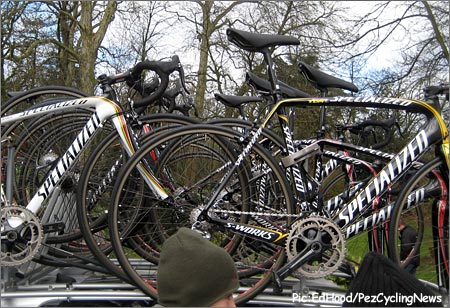 The savage power that Tom Boonen puts down can be gauged by comparing the down tube on his machine to that on teammate Bettini’s; The Tornado’s gas pipeline job makes The Cricket’s look positively skinny.

The winter always sees changes of colour, Milram’s Colnagos go from blue to white; the CSC Cervelos morph from red to white. 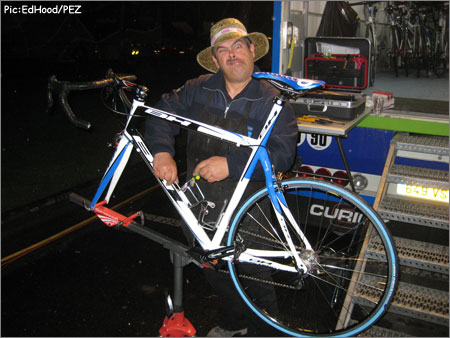 Sometimes it’s a complete change of allegiance; after a long spell with French sports supermarket Decathlon supplying the hardware, AG2R have crossed the Pyrenees to Spain and BH – formerly bike supplier to Liberty Seguros (oops!)

Another French squad, Agritubel have done the unpatriotic thing and dumped French bike manufacturers MBK for Italian brand Kuotas – and mighty cool they look too. Needless to say, both are carbon, aluminium is rapidly going the way of steel, aren’t those marketing men clever? 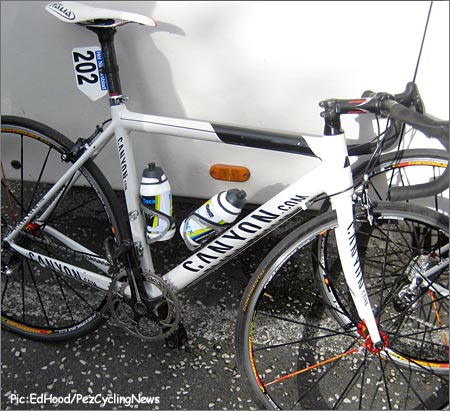 If you know what you are looking at, some of the bikes can tell you a story, take Collstrop’s tired Canyons – a black sticky plastic panel disguises last years Unibet graphics. 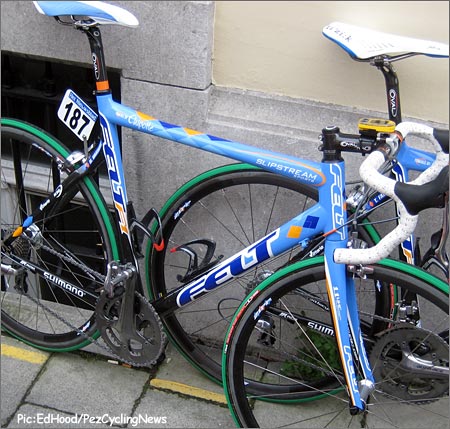 And then – there’s Slipstream and their Argyle; it’s on socks, the bus, the bikes, everywhere, love it or hate it, if the name of the game is to set tongues wagging, then the job is done!

The Belgian journos were out in force, CA was the target as we stood at the bus inspecting the Look 595’s, Thor Hushovd was saying; “I have good form and hope to be up there” – he got that right, third spot on the podium was no bad ride.

Roll-out and Bettini was stone last as the pistol fired, time to nurse our hangovers in the car. 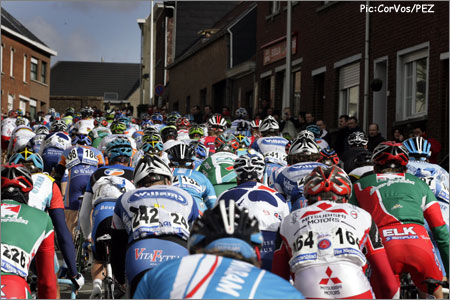 The Berendries climb at 100 kilometres and the burgers are selling well, it’s cold in the wind but sunny as we find our spot on the climb. There are six away including an Argyle guy – Mike Friedman who made it a better day (with 12th) for Slipstream than the one that Quickstep had (best finisher Weylandt 16th). The bunch looked relaxed, six minutes behind, Boonen on the front with two henchmen – it looked under control, but it didn’t work-out that way two-and-a-half hours later. Despite the ‘easy’ vibe in the peloton, the faces of the stragglers were saying that it was anything but ‘easy.’ 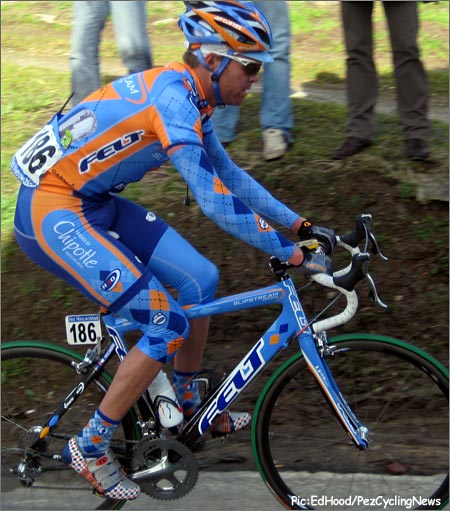 Last man on the road was a Slipstream man – Will Frishkorn, but this could have been part of Jonathan Vaughters plan to colour the world Argyle?

The Eikenberg, 50 kilometres later and there are 50 K to go, there are still five up the road, David Boucher (Landbou) has slipped off the pace but there are still three minutes back to a strung-out bunch, from which Gilbert has launched himself with panache and savagery. There’s panic behind, Boonen is near the front but isn’t having fun, Steegmans is way back; pain is the order of the day as desperate men fight for survival.

We’d never get to the finish in time, so we headed for the Wieler Cafй and its high definition TV. “Ho ho ho ho ho !” chortles the Belgian commentator as Gilbert jumps clear of the group at the start of his solitary charge for glory. 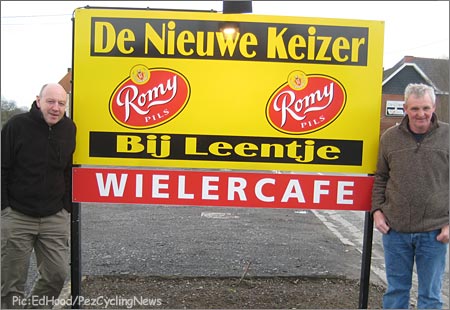 After the finish, they had the curator of the Flanders Cycling Museum on the show, a serious, studious-looking man; there was no inane banter, more a of a philosophical debate with much hand movement and nodding of heads – everyone in the cafй went reverentially quiet for the duration of this discussion, which was probably along the lines of comparing QuickStep’s bad day to the start of the decline of the Roman Empire. 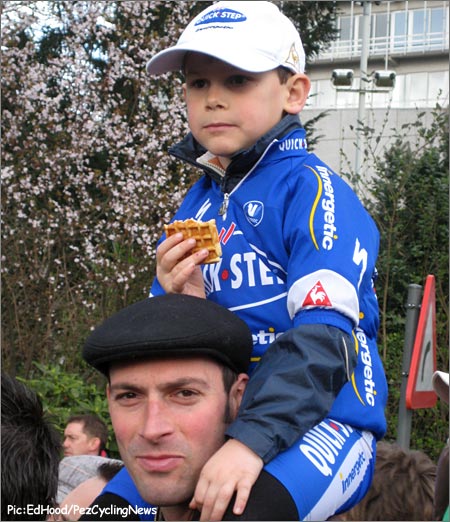 You know you’re in QuickStep country when…

We were pencilled-in to meet former Gent-Wevelgem winner, Nico Mattan after the race, he was commentating for Belgian radio. I rang him; “I have been talking for three hours, I am very thirsty and must go to a bar at once!”