Again it was quiet satisfaction in the bar rather than the ecstasy that a Boonen or Devolder win would have generated. But QuickStep pulled the fat out of the fire as Steven De Jongh easily took his Specialized around young compatriot Sebastien Langeveld of Rabobank on the line to take the winner’s stuffed donkey for the second time.

The laminated flooring boys must have received a really serious tongue lashing from QuickStep big boss and 1978 Kuurne winner, Patrick Lefevre – they put seven men in the break of the day. It looked like the finish was being set-up for a Tommeke win; whilst Tossato, Van De Walle and eventual winner de Jongh worked like galley slaves, Boonen sat comfortably out of the wind. 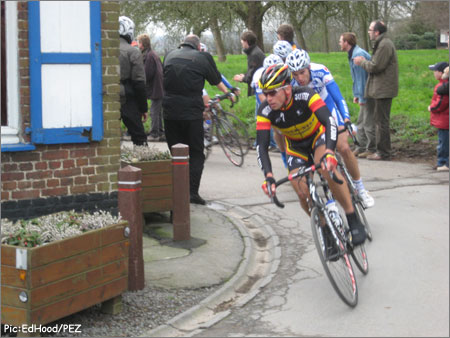 In the finalпїЅ it was Devolder who covered most of the counter attacks but when Langeveld attacked with a couple of kilometres to go, it was de Jongh who planted himself on the Colnago’s rear wheel. At this stage, the QuickSteps worked a “double bluff swerve,” confident that de Jongh had the finishing speed, they let the move go and it was down to the three Liquigas riders to chase. At the line, de Jongh was lengths clear of Langeveld with surprising Aussie Matt Goss of CSC taking the last podium place. So, QuickStep took the cake, but perhaps without the icing.

Nico Mattan reckoned that QuickStep were worried about eventual fifth-placed Slovenian Borut Bozic of Collstrop who’s very quick at the finish, as Nico said; “in pro cycling it’s the team winning that matters and today it was the best team who won.”

It was 13 degrees at the start in Kuurne, windy and bright but cloudy – a perfect day for bike racing. 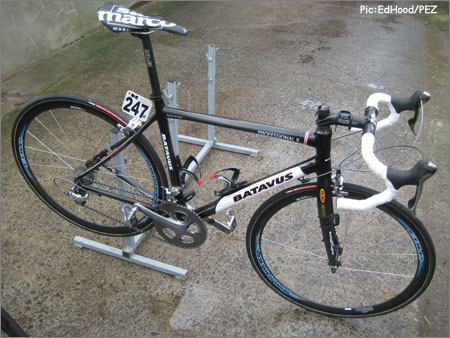 Viktor excelled himself and we were out bike-spotting two-and-a-half hours before the start. The juniors were arriving for the supporting race and the PA was already pumping out novelty Euro-pop at 09.45; making for an unusual Sunday morning alarm call for the good citizens of Kuurne.

It was 09.50 when we Pezzed our first bike – a Batavus Professional X from the P3 Transfer-Fondas squad; a no nonsense road bike.

Next to get scrutinised were the Silence-Lotto Ridley Heliums with their integrated seat posts and boldly-graphiced San Marco saddles. 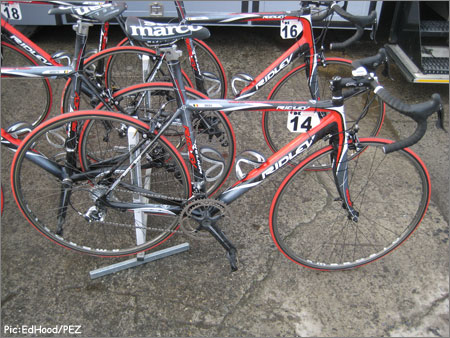 By 10.30 the full-blooded pro race PA was cranked and Abba were telling us about the “Dancing Queen.” 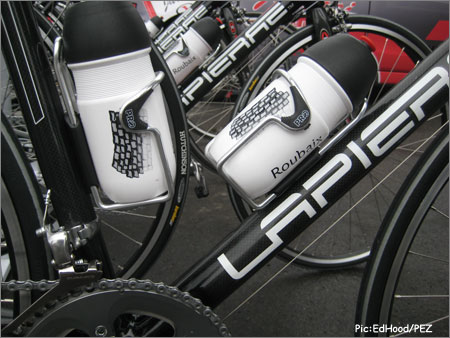 Kuurne is always a race that gives the lesser squads the opportunity to mix-it with the big boys, this edition was no exception and among the continental squads was Roubaix-Lille MпїЅtropole. We liked their black Lapierres, but the carbon Selle Italia SMP cutaway carbon saddles looked pretty severe… 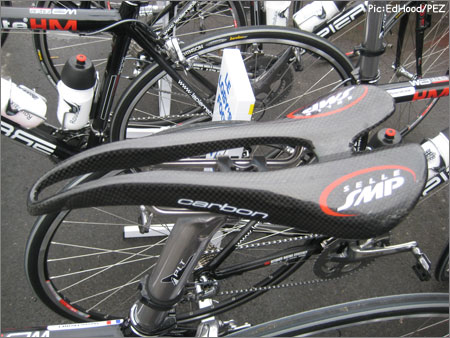 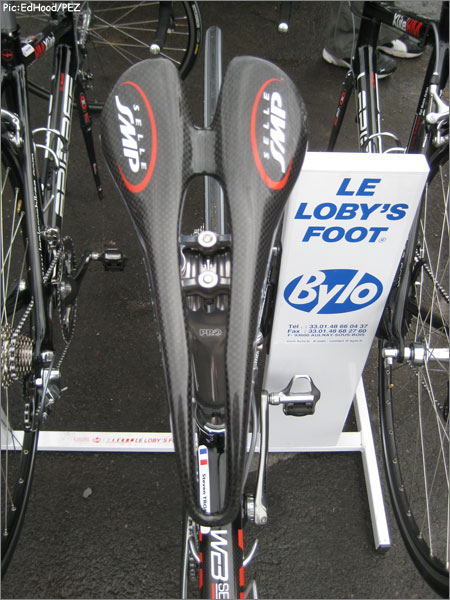 Jartazi aren’t a big squad either but have changed this year from Motta to Basso frames, maybe a wee bit over-decalled, but hard to miss. SRAM are the groupsets of choice but this is a pro continental squad, every euro counts, so it’s ‘Force’ and not ‘Red’ that graces the white and red Bassos. One man spending the autumn of his career with Jartazi is 2003 Belgian champion Gert Omloop, still looking sharp but an old warhorse among his fresh faced young team mates. 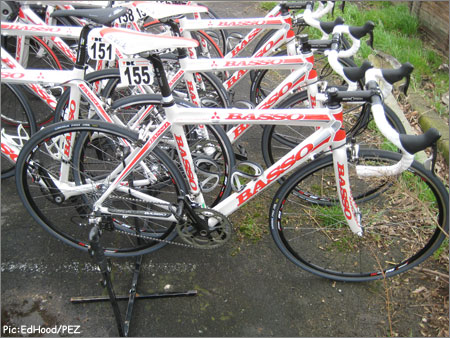 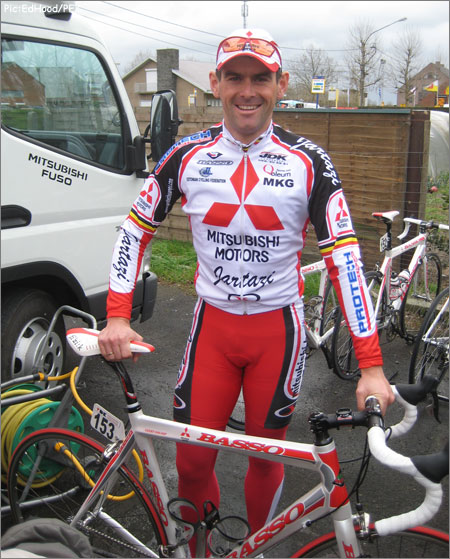 Slipstream rolled-in and we noticed that even their Zipp wheels have Argyle on them! 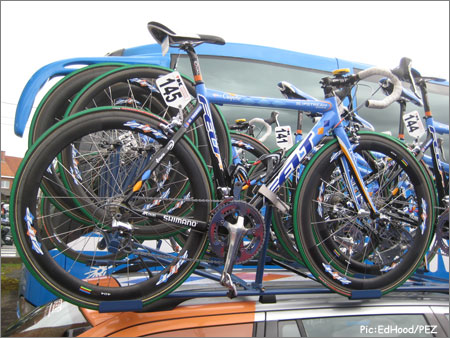 Philippe Gilbert was day-off over at Francaise des Jeux – he deserves it after yesterday – but those Lapierres still look sharp. 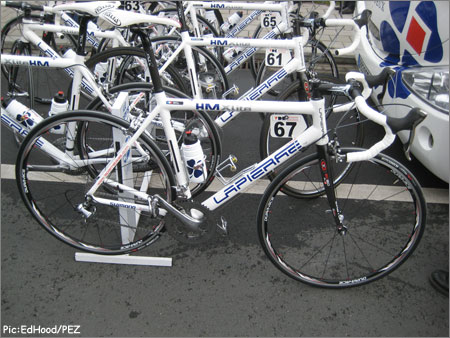 The BH which took Ukrainian Yuriy Krivtsov of AG2R to fourth at Het Volk was all shiny again and ready for another day at the office. 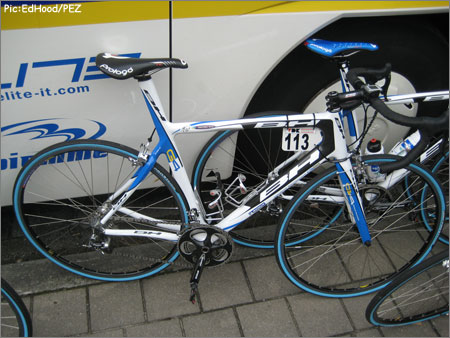 The third placed bike – Thor Hushovd’s Look 595 – had been “washed and brushed-up” too. Despite the prevalence of exotic factory-built wheels on the market, in a race like this, with it’s cobbles and bergs, CA run 100% traditional sprint wheels, albeit on anonymous rims. 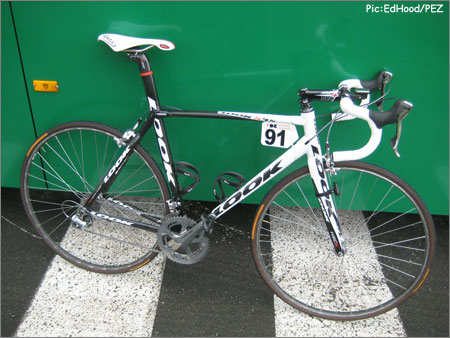 Over at Astana it’s Trek providing the frames and SRAM the groupsets, this is Pro Tour though and it’s the ‘Red’ equipment on the Madones. Mechanic, Alan Buttler was in a good mood – he’s going home to England tomorrow after seven weeks straight on the road or in the Service Course. 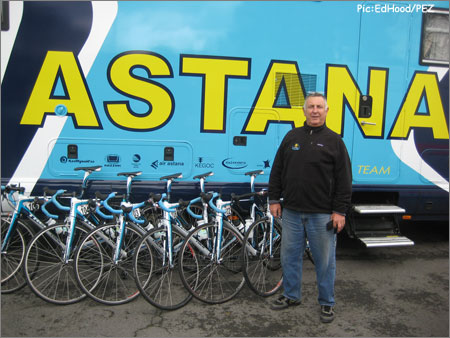 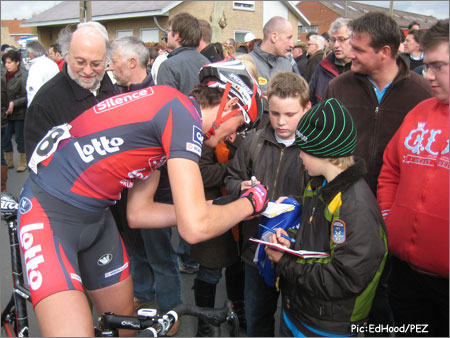 With the roll-out fast approaching, we discovered one of the nuggets that prospecting like this sometimes produces – what looks like the production model Shimano electronic gears. 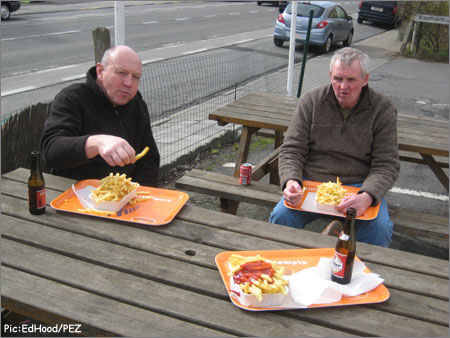 On the stroke of noon and with the “oom-pah” band giving it full dementia, the 2008 Kuurne-Brussels-Kuurne was off and running. 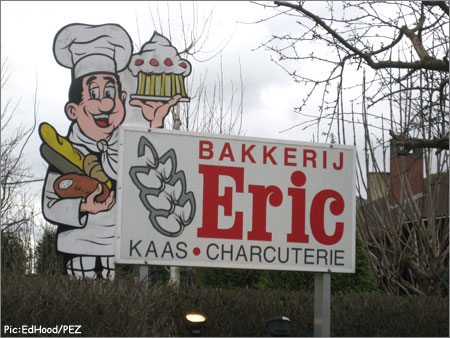 It was time to head for the hills, but not before frites, washed down with a Jupiler, then a look at the junior race at Kaster. The lead car PA was pumping-out “Black is black” and the locals approved of my backing singing. Junior race, pro race, there’s not too much difference here – police cars, motorbikes, photographers, sponsors names everywhere and guys driving team cars like maniacs. 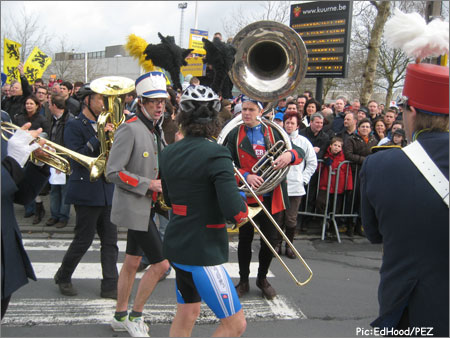 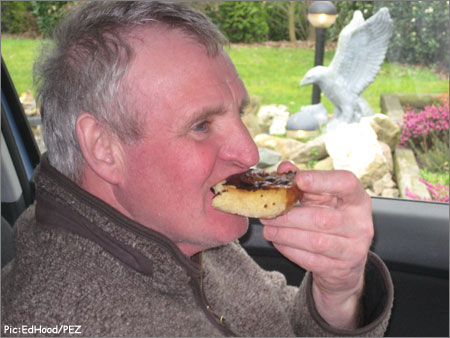 Rice cake was what we needed for desert and we duly nailed three wedges of it at Kluisbergen. 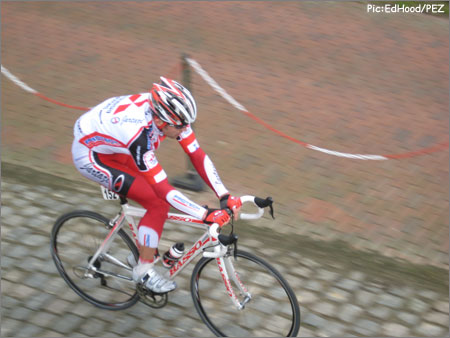 The top of the Kwaremont was busy; fans, police, team helpers with spare wheels and bottles. The summit is less than a kilometre from the top of the Cote de Trieu (that’s the ‘Phil’s Hill’ of David Duffield commentaries), so it’s a good spot, provided there’s not a break off the front – then the race traffic makes it hard to walk from the Kwaremont over to the Cote in time. 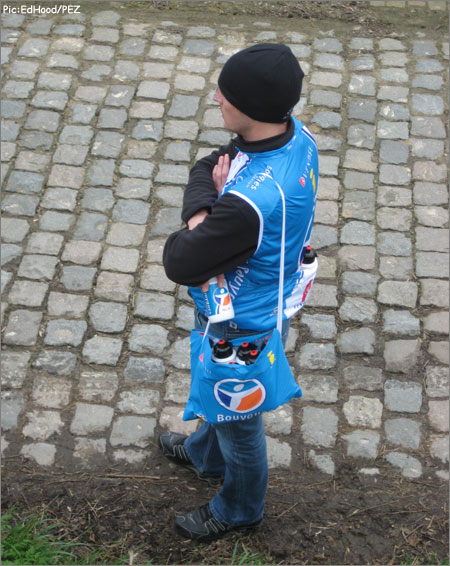 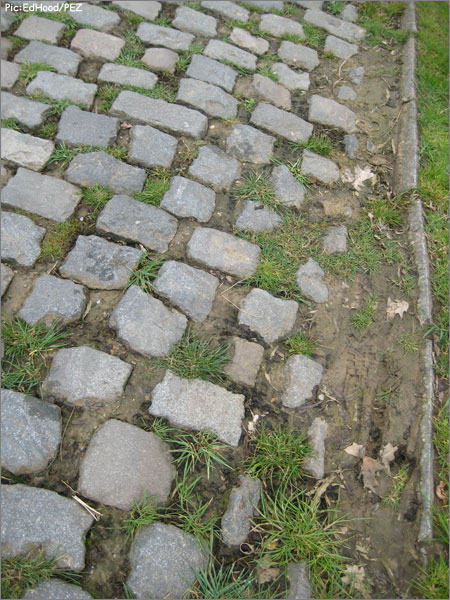 There was no such problem this year as Stijn Devolder, resplendent in the red, yellow and black of the Belgian elite champion’s jersey, thrashed over the summit of the Kwaremont just clear of a strung-out, grunting bunch. Behind him Quickstep massed in support. By the top of the Cote the race was finished for all but the two dozen or so who made Devolder’s selection. 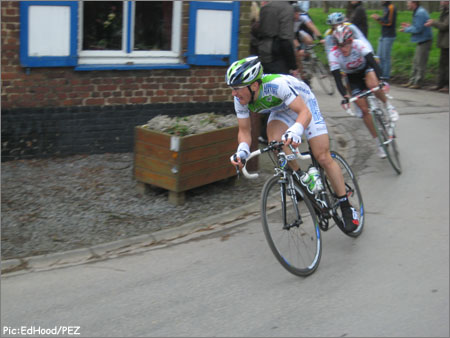 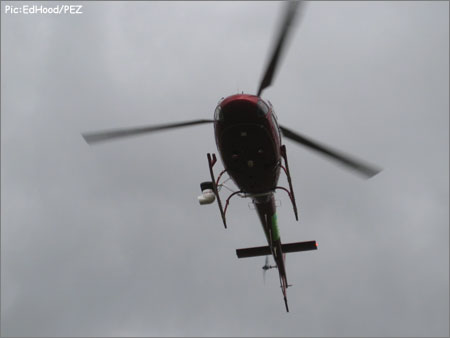 To make the finish would have been impossible, so it was ‘head for the bar’ time. The smoking ban for pubs, which has been implemented in the UK and France, hasn’t reached Belgium yet and we’re considering developing a ten-a-day habit just to get us acclimatised. The smoke nips your eyes and catches your throat but at least you don’t have the wood burning stove to contend with, like you used to at Peter Van Petegem’s fan club bar.

As the endless re-runs of the finish began, we headed off; there was still a 7.30 pm interview, with ex-British Champion, Hamish Haynes to conduct – at the other end of Belgium, but that’s another story.