So often the bridesmaid, Stijn Devolder consummated his marriage to the big-time with a stunning 25km solo ride to victory in the Tour of Flanders. And if you’re going to win the only race that counts, as far as the Flandrians are concerned, you might as well be dressed for the occasion in the Belgian champion’s jersey.

The ecstatic and disbelieving QuickStep rider had enough left … just … to sit up, acclaim the grandstands on either side of the finish line and enjoy his greatest win, before riding into the embrace of his boss, Patrick Lefevre. 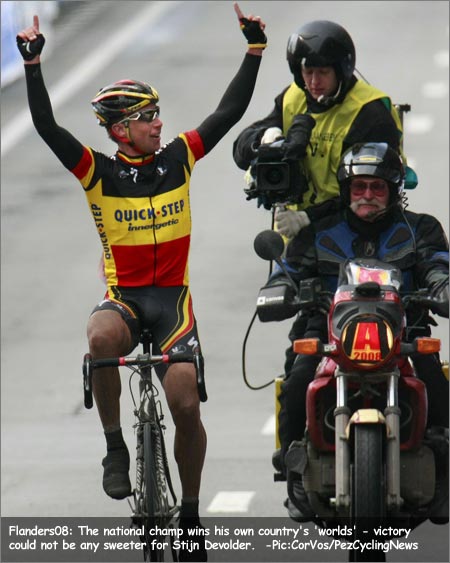 Inside the closing 5 kilometres, Juan Antonio Flecha came closest to catching him but ran out of gas and was outsprinted on the line by Nick Nuyens, putting Belgium one-and-two on the podium.

Whether you want to call it a tactical masterstroke, an epic ride or a healthy slice of ‘good fortune pie’, QuickStep rescued what looked like a lost cause today. Under pressure, and lacking numbers at the front, Devolder accelerated away, seemingly to ease things for Boonen, with 25kms to go, and nobody got within touching distance.

The weather even included sunshine as the pack raced through the early kms in Torhout.

The boys in blue-and-white, and dirty grey thanks to the miserable weather, were looking outgunned and outthought as Liquigas, Cofidis and CSC had more firepower up front.

But the mission was a success – after a fairly pedestrian spring by their standards, QuickStep have the Ronde in the bag, and Boonen looking back to his best for Paris-Roubaix next week. 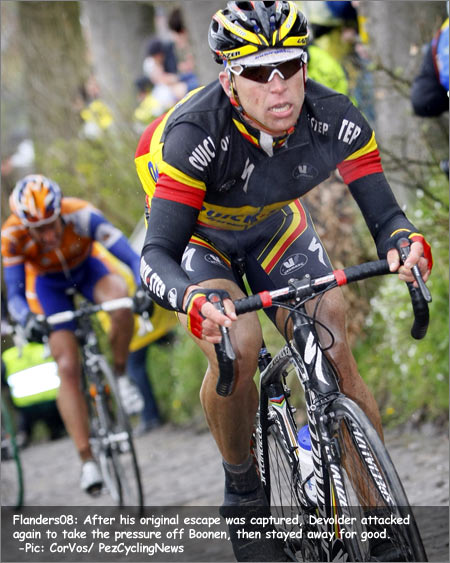 Devolder tattoed his name onto the mud-spattered skin of Flemish cycling folklore on the Eikenmolen. Just as the main field grabbed the tail of his initial breakaway group, off he went, stamping and wrestling his way over the top.

15kms earlier, the Belgian champion was flying free with some very big names: George Hincapie, defending champ Ballan, Karsten Kroon and up-and-comer Seb Langeveld. Onto the Valkenberg, Devolder was piling it on with Cofidis charging behind. Lief Hoste had been chasing for 17kms to get back to main group and looked gassed.

Into Brakel with 32kms to go, the famous five had 25 seconds as they dragged onto the Tenbosse. Kroon gave it full gas, with Devolder sitting in. Behind, it’s still Cofidis doing the chasing.

Devolder peels off his gilet and hurls it to the roadside – a nice souvenir for someone, and it’s clear this is personal.

Hitting the Eikenmolen – at the very bottom, the chase group closes in, and Devolder immediately goes away. He goes over the top clear, and Boonen and Pozatto just coast off the top, looking at each other.

Approaching the Muur van Geraardsbergen, Devolder’s needle is swinging into the red. Is he actually working for Boonen, or on a solo glory ride? His earpiece is very obviously dangling in mid-air, so he isn’t listening to any instructions from the team car. This is the Flandrian equivalent of death or glory on the cobbled climbs. 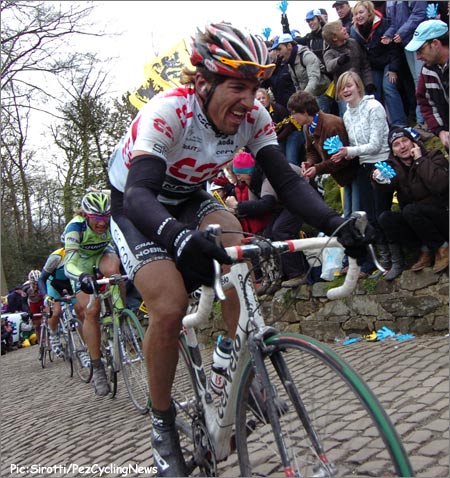 Cancellara was present at the front, but without his speed from San Remo.

On the Muur, Devolder is grinding upwards, as Flecha launches a major chase. The fans are going a very Flemish kind of crazy as one of their own is solo and heading for the win …. maybe. 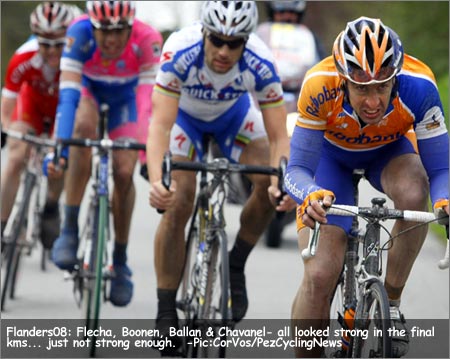 Devolder is almost pedalling in slo-mo, it hurts so much, but he gets over the top of the Kappelmuur alone. Flecha, Boonen, Ballan, Nuyens and Terpstra are closing.

Onto the Bosberg, the 17th and final climb, Cancellara has teleported into the lead group. Devolder has 16 seconds, Boonen is looking calm, but the group is swelling. Langeveld charges clear to set things up for Flecha.

Off the Bosberg, Devolder has a tailwind and the red, yellow and black kit of the Belgian champion – a sure-fire seller in your local cycling clothing store next week – is hammering clear. Langeveld is marooned half-way between Devolder and the chasers. It’s now 30 seconds back to the Boonen group. To quote Manchester United soccer manager, Sir Alex Ferguson, so close to the finish this truly is ‘squeaky bum time’!

7kms left and Devolder is still alone. The chasers are together at 19 seconds and it’s looking good.

6kms to go: Flecha jumps on the right of the road. His buddy, Langeveld, is on the left with the peloton in his wake ….. and he stops pedalling. The chasm opens and Flecha is off. Nicely done, and suddenly Devolder’s lead looks about as healthy as a turkey before Thanksgiving.

It’s mayhem as riders attack and counter like desperate prizefighters. Devolder has hands draped over the bars under 4kms to go. Flecha is bursting blood vessels to get on terms.

Nick Nuyens is closing on Flecha, and gets him. Even working together, they’re cooked and the gap hovers at 15 seconds. Devolder is guaranteeing the win, and that he’ll never have to go asking for a contract in the future. This won’t be his last big win.

We learned a few other things today – maybe March took a bit much out of Cancellara, but we’re not writing him off for the flatter ‘hell’of Roubaix next week. Tommy Boonen looked good all the way today, leading over several climbs, so he’s rocking into shape nicely.

The wildcard teams also justified their invites – Mitsubishi-Jartazi, Skil Shimano and Topsport Vlaanderen all sent men to the front in the first successful escape, namely Tombak, Veelers and Renders, along with Vincent Jerome of Bouyges Telecom. The lead never stretched out too far – with dodgy weather conditions a possibility, the big teams just aren’t going to take any chances in a race as big as the Ronde. 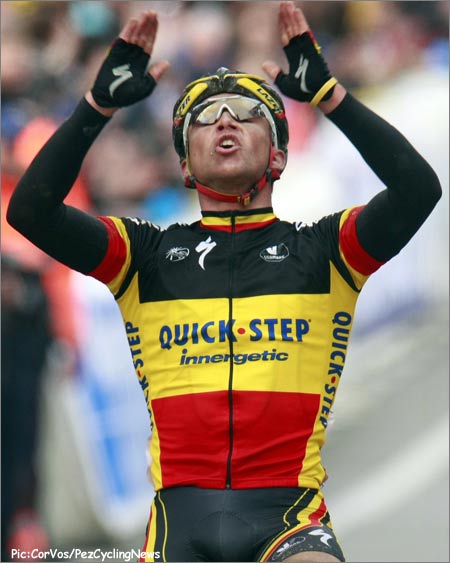 In fact, kudos to Tombak who had a stormer today, and should be back in the ProTour next season if he keeps this up. A shout to Allan Davis too, who was still on the front on the Kappelmuur, just weeks after returning to the European scene.

There’s only one man who counts tonight though – proficiat, Stijn. You deserve to celebrate.

• Stay tuned for PEZ’s full race-chase coverage, as we ride shotgun with Silence-Lotto’s Bert Roesems.
• Be sure to catch next week’s Paris-Roubaix on Cycling.TV

Flanders’08: T Minus One Day