Now that you’ve seen the awful jungle gym the riders will be confronted with, let’s take a look closer at who’s flying, who’s not, who has a chance, who doesn’t, and that special somebody who has been quiet for most of the first 90 days of racing this season…

It seems appropriate that the Tour of Flanders falls between Milano-Sanremo and Paris-Roubaix. If you took the final climbs of the Poggio and Cipressa from the Italian race, mix in the cobblestones of the French race, then the resulting challenge would be something akin to the 93 year old Belgian event. Let’s take a look at the players who will animate the most important day of racing on the Belgian calendar and arguably the best day of racing all season.

Yesterday, PEZ took a look at the formidable course that stands between them and eternal glory as one of Flanders’ finest. As the fateful day approaches, let’s peer closer at the possible contenders come Sunday in Flanders’ fields.

You Gotta Start With Two
No matter what anyone else has done this year (yes, I’m looking at you Gilbert and Chavanel), two names MUST come up before all others when it comes to big, bad cobbled dominance: Fabian Cancellara and Tom Boonen. The two have had very differing years thus far this year, but still, when it comes time for the roll out on Sunday, these two names will tower over all others, even last year’s winner, Alessandro Ballan. 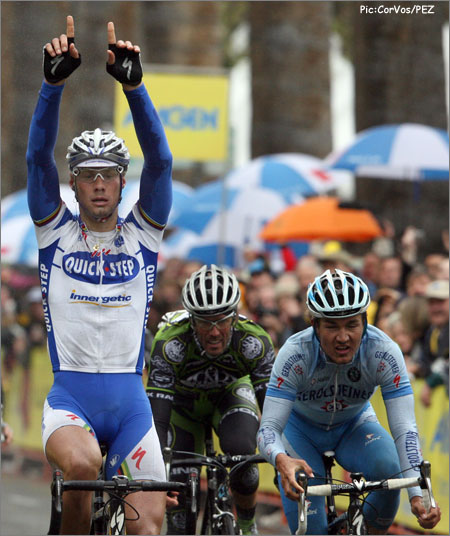 Tom Boonen’s form is one of the more peculiar mysteries of the year. He started out, as per the norm, raging in Qatar with multiple stage wins. He took a win in California, and henceforth his results have eased off perceptibly, not completely mind you, but definitely a quiet churning rather than a hellish gale. Looking favorably at Tornado Tom, he is minding his preparation precisely with eyes only on the coming week – all else is merely training with Flanders and Roubaix in mind. 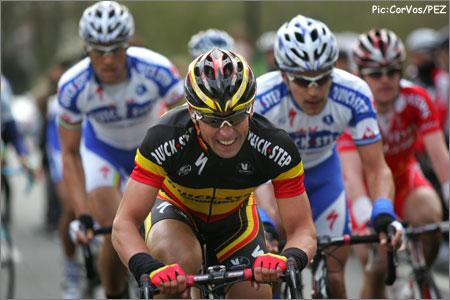 Grand Tour contender Stijn Devolder will also be a man to watch on Sunday.

Looking a little more critically, one could surely say that Boonen just doesn’t seem to have it this year. He has done nothing of any real consequence. Who cares about a few stages in Qatar, a win in California, and a few top tens in Belgium? Hell, he didn’t even win the E3 and that has been his personal playground for the past four years. What did he get, 8th? Come on. I personally don’t think that’s true. It really seems like Boonen is trying to take a very measured lead-up to his top races with some small testing efforts thrown in to make sure everything is ok – remember Boonen’s big effort in the Brabantse Pijl last Sunday? 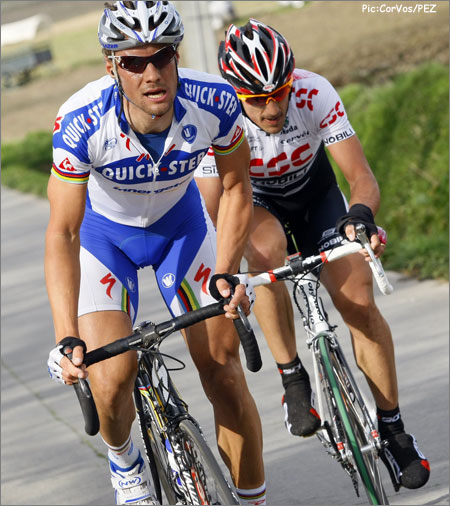 Boonen’s slowish March has probably been welcome to the rest of his team though as they have all had carte blanche to go for their own success. This was seen often via strong rides from Weylandt, De Jongh, Devolder, and Steegmans. 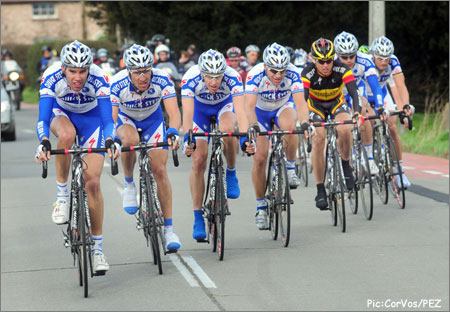 Part of Boonen’s possibilities on Sunday will surely hinge on how incredibly strong his QuickStep team is. If the team hits a full on boil this weekend, QuickStep could manhandle the race and put multiple riders into a strong selection. The opening Belgian weekend still stands as a warning sign though: will we get the QuickStep that completely missed the finale at Het Volk? or the QuickStep team that blew Kuurne-Brussels-Kuurne to smithereens? 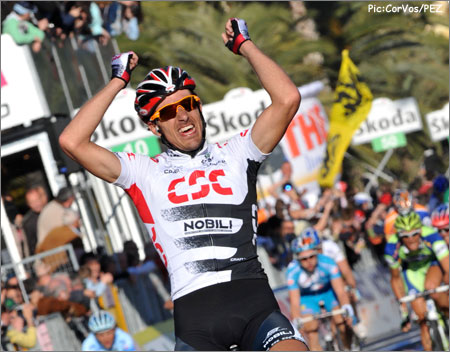 Fabian Cancellara on the other hand, is NOT a mystery. Cancellara has had a career defining season already and it’s only April 3rd. Cancellara started early with a win in California, then again at Eroica, again at Tirreno-Adriatico, and finally the biggest of them all: Milano-Sanremo. Cancellara has truly become a superstar capable of winning in nearly every situation. Those early wins have all been great, but you have to know that everything has been raced with this coming week firmly planted in the mind of the World Time Trial champ. 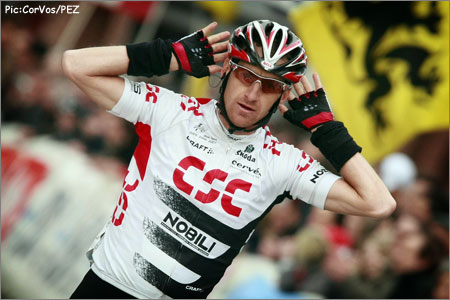 QuickStep isn’t the only superteam in the race. CSC has quite the wattage factory in town for the festivities. Kurt-Asle Arvesen took a splendid win at the E3 this weekend, Karsten Kroon took a toughie in Castilla y Leon, and then there’s the rest of the red, white, and black marauders from Denmark… 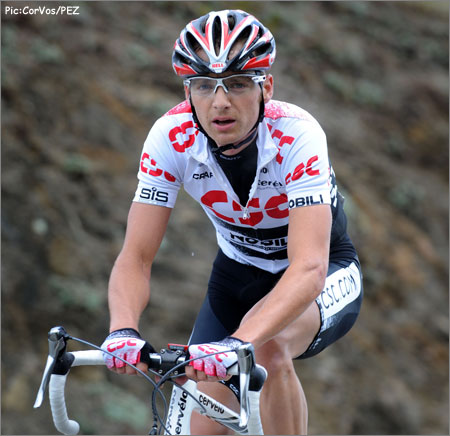 Contrary to what some may think, I believe that Cancellara has everything and then some to take the win in Flanders this weekend.

Just imagine, a win first in Sanremo, then Flanders, then Roubaix? Is it possible?

The Defending Champ
The next two favorites, like Tom Boonen, have had fairly quiet Springs, one moreso than the other. Alessandro Ballan, last year’s champ, has kept his form to a low boil it seems, but came out for a fantastic effort at Eroica a little while back. He might have had a better go of it last weekend if it weren’t for an untimely flat. He wasn’t nearly as good at De Panne this weekend as he was last year, but perhaps he’s following in the footsteps of one Tom Boonen. You can expect a full force Ballan this weekend though. 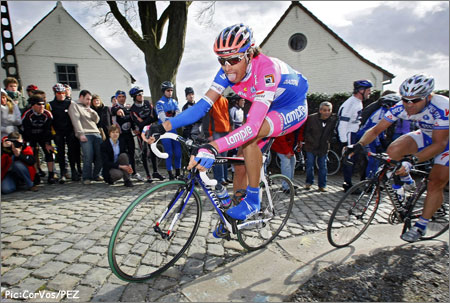 2nd Place: Three Times In Four Years
Oh, hi Leif Hoste, haven’t heard ANYTHING from you this year except for much arm waving in groups and the front of the field. Leif Hoste is a very irritable bike racer it seems, and this year he has nary a result. Absolutely nada. I can’t even make a comment on him. Can anybody? I can’t rule him out, three times runner-up in four years…nuff said. 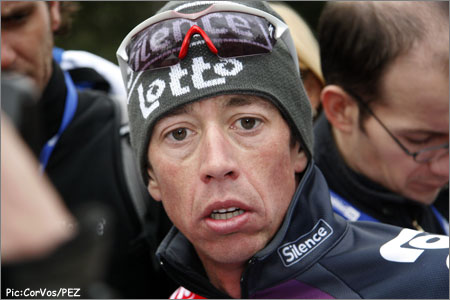 A win this weekend could surely induce necessary jollification to Hoste’s haggard face.

The Two French Speakers On Amazing Form
A Belgian and a Frenchman, Gilbert and Chavanel, two relative newcomers to Flanders, and suddenly two favorites – both have downplayed their chances this weekend, but they’re just so FAST right now. 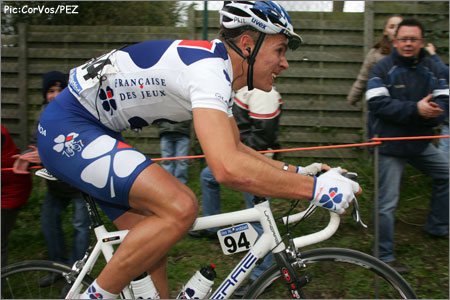 Of all of the riders on my awfully subjective list that have a rightful claim to favorite status: Philippe Gilbert and Sylvain Chavanel have duly EARNED their spots, not on prior exploits, but results this year, results in the last WEEK.

Philippe Gilbert absolutely HAS to be seen as a podium finisher and huge favorite. Gilbert crashed on Sunday with 40k to go, chased back on to the field, went through the field, chased Chavanel solo, caught up to a small chase group, went through them, and very nearly caught him to finish 2nd. Gilbert is a threat everywhere. He might not be a huge powerhouse like Booncellara, but methinks he will be just fine on the bergs. He’s a fairly quick finisher, but he’s best solo, and he ain’t scared to be solo. You gotta love how this guy races his bike. 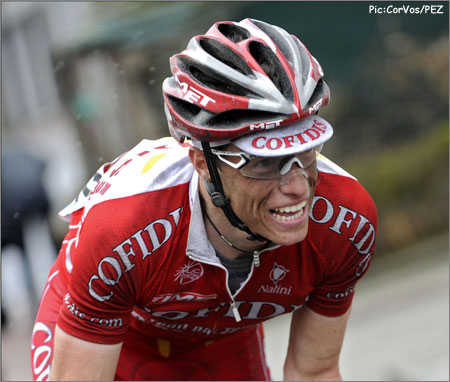 Sylvain Chavanel is a little bit more of a question mark in my opinion. It’s obvious that he’s flying after four big wins already this season, of which two were Belgian semi-classics, but this has all been a surprise. It’s not surprising to see Gilbert romping about Flanders, he has always been destined for that, but Chavanel…Chavanel seems to be transforming, or just coming into himself as a rider. Just like Gilbert, he ain’t scared of a solo escapade, and he’s more than strong enough to pull it off. I think we’ll hear a lot from Chavanel this weekend. Let’s not forget his teammate Nick Nuyens either. Nuyens has been a bit quiet so far, but ALWAYS there. He has set Chavanel up nicely on a few occasions as well. It’s not hard to imagine the tables turning and Chavanel setting up something big for Nuyens.

The Italian Contingent
Um, Pippo Pozzato anyone? Filippo Pozzato, fashion victim that he is, will win at Flanders someday. The only question is when. He’s not in career defining form, he’s just damn good like he always is. That’s the thing with Pippo: I don’t think we’ve seen him anywhere close to his best. He’s amazing how, but he’ll make that last step to utterly ridiculous sometime in the next few years I imagine. Maybe when he gets rid of the corn rows. 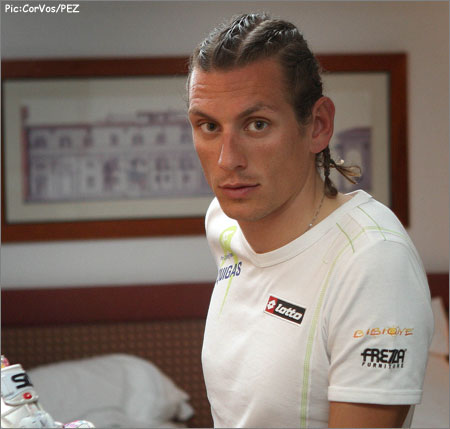 Last year’s second Italian on the podium, Manuel Quinziato, seems to have found his form at just the right time. He rode a great first stage at De Panne and perhaps he can make some kind of impressive repeat of his great ride in 2007. He’s a quiet threat that’s for sure. 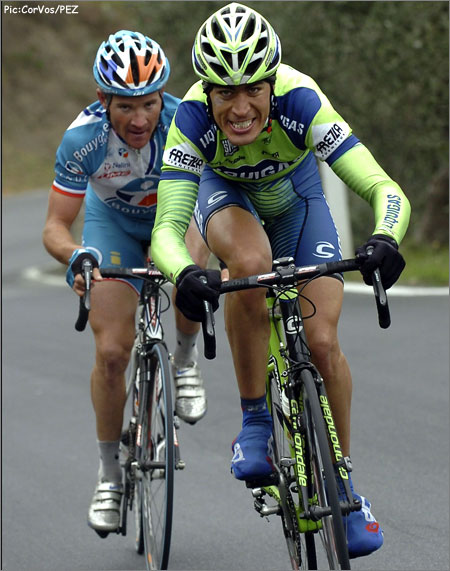 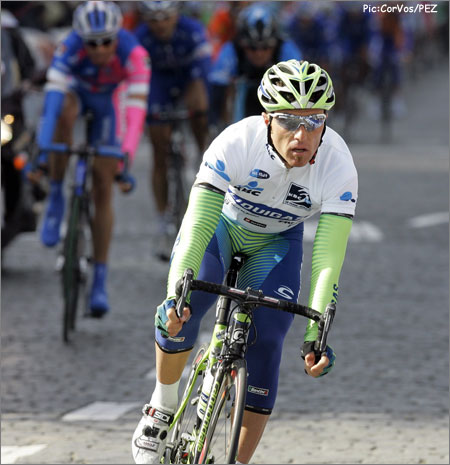 The Spanish Armada Of One
Why, it’s Juan Antonio Flecha of course. He’s solid, he’s always there, and he’s bound to break through at some point with a big win. He has the pained, hardened expression that is a must on the cobbles…and he’s going well at the moment. 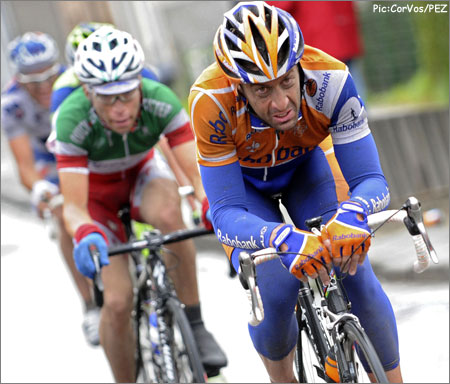 One Last Thought
First off, I love Nico Eeckhout. He won’t win, but he looks to be on good form. Watch for him to have a good day. How couldn’t you pull for a man named RAMBO? He’s my super dark horse. 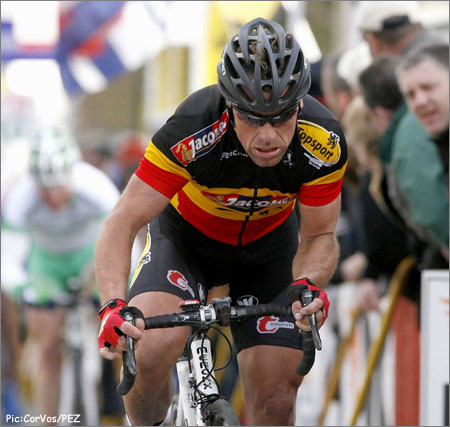 Looking for a potential podium picture that already happened? The podium from Milano-Sanremo looks pretty conceivable with Cancellara on top with Pippo and Gilbert rounding out the other two steps. 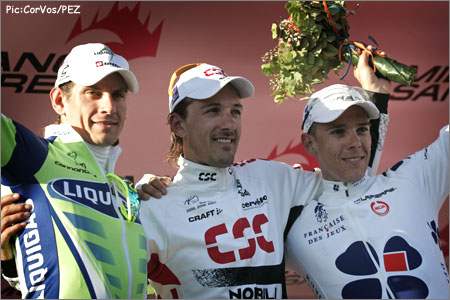 When it comes down to it though, I think that Boonen has the goods. I’m going with Tommeke. How creative. Actually, no, scratch that, I’m going with Gilbert, though I’m nervous that the motivated locomotive of Fabian Cancellara will just be too much for everybody.

Check Out The Guys Who REALLY Know
I can make bold claims all I want, but I don’t have a business that relies on forming fairly accurate odds to my customers to BET on: Unibet.com does that, and if there’s anything that’s well worth checking out at least for the informational gathering aspect, this is it. You can bet the bookies over there know a helluva lot more than I do over here.

Flanders’08: The Way Of The Cross