Flanders’08: The Way Of The Cross

Former Flanders winner Andrea Tafi described de Ronde as “Only those who are in top condition can say that the Ronde is not hard. For everyone else, it’s the Way of the Cross.” Indeed, the Tour of Flanders has rightly established itself as arguably the toughest of the Classics – offering everything up to the hopeful winner: wind, cobbles, length, tough roads, oh, and 17 bergs.

By Matt Conn and Jered Gruber

Brugge To Meerbeke, Simple As That
It’s only 50 miles by car from Brugge to Meerbeke, but the riders manage to do almost 160, heading first to the North Sea and Oostende before turning back into the heart of Flanders for more climbs than anyone cares to count. 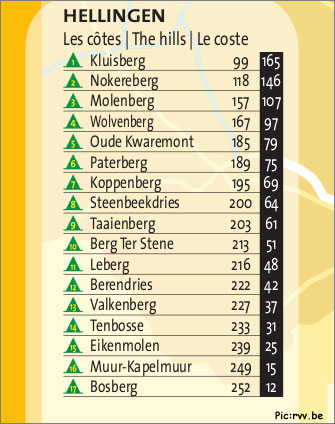 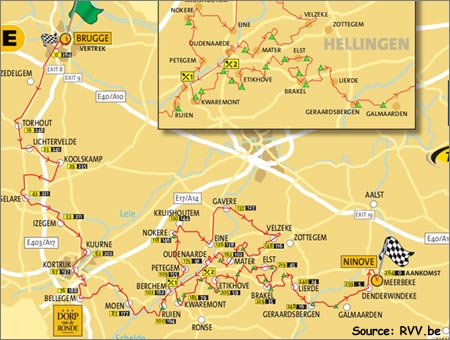 This year avoids the slog to the coast, and instead takes a more direct route from Brugge into the heart of Flanders for a twisty course finding just about every hill imaginable.

The first hill, the Kluisberg, isn’t until well into the race (over 100 miles into the race!), far enough in that the riders had a decent enough warm-up, got pummeled by gale-force winds along the flat roads of the north, and right on time for the peloton to start kicking into full-swing to bring back the habitual early break. 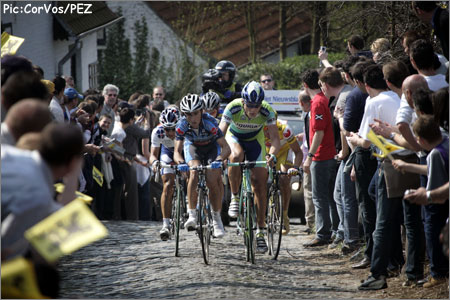 After a break of unspecified size is allowed a long leash, it’ll be brought back into the fold around oh 230-250km into the race, and from there it’ll be time to light the powder.

The Kluisberg comes at KM 165, from there, the seventeen climbs follow in rapid succession, 14 in the final 100 km, not to mention the numerous little cobbled FLAT sections that seem to continually pop up as well.

Matt Conn has an interesting tidbit on one of the non-uphill cobbled sections… The ancient Roman road in Velzeke, near Zottegem (made up of the Paddestraat and Lippenhovestraat, totalling some 3.9km of stones) was re-laid before last year’s race. Such was the state of the road that the hump that had formed in the middle of the ancient way had a habit of smashing the transmissions of team cars as well as the more fragile wheels of the bicycles racing across it.

The Molenberg often comes as the first climb of the day, but will be #3 in 2008.

Know Your Bergs
As well known as the riders who take the victories in the race, are the brutally steep and cobbled climbs they have to conquer to get there – 18 in the 2007 edition. These are what define the Tour of Flanders and always provide the stage for the winning attacks. The Oude Kwaremont (2.2km, 1.6km of cobbles, average of 4%, Max of 11.6%), which has been a feature of the race since 1974, is where the real race begins.

It is one of the longer, tougher climbs due to the narrow run in to the bottom, poor cobbled surface and steep 11% section in the middle. As it is only the 5th climb, it’s usually all together here, but it’s around this time where the cream starts to rise and the muscle flexing begins. If you come over the top a bit adrift, there’s still the chance to get back on, but it’s only a matter of time before the proverbial ticket is punched.

4km later comes the Paterberg and 6km following THAT there’s the return of her most awfulness, the Koppenberg. The Koppenberg, coming in at 195k and Berg #7 this year, took a year off in 2007, but is back to make at least a portion of the best riders on the planet…walk. 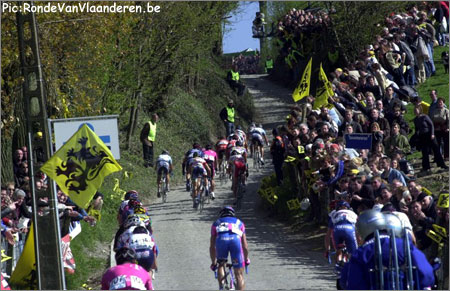 The Koppenberg was a welcome return to De Ronde a few years ago, then a disappointing loss, and now a feared return. She does a damn fine job of shaking that rotten fruit from the tree.

You know things aren’t going too well when you end up doing this, because keep in mind, the leaders are well over the climb and probably hauling ass at over 50k/hr. 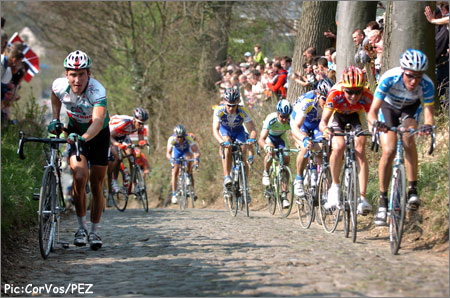 A Closer Look At The Koppenberg

This year, the infamous Koppenberg is once again back at De Ronde. Dropped from the race in 1987 when Danish rider Jesper Skibby was run down by the car of a course official, desperately trying to get away from the advancing peloton, the climb, which was more often than not conquered on foot, was deemed an unnecessary part of a “modern” bike race. 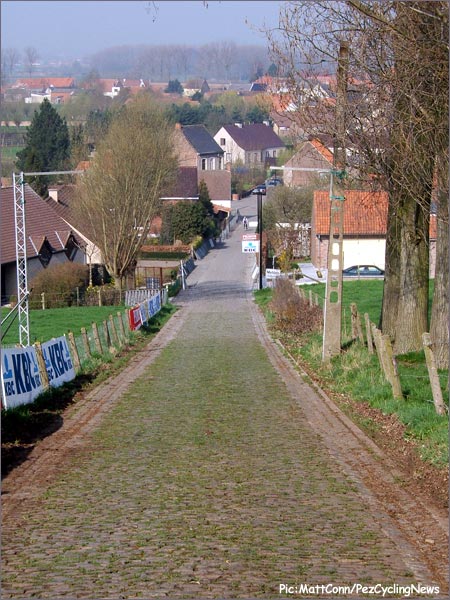 After major works and a completely new cobbled surface laid, the hill returned for the 2002 edition, but after a five year run, it didn’t make the cut in 2007. With little or no use for 50 weeks a year, the road surface developed a layer of moss that made the cobbles virtually unrideable in all but the most perfect conditions: Not something that can be banked on in April in Belgium. Apparently the problem has been solved and the Koppenberg returns.

We might once again get that special treat of seeing only the first few riders, including a flying Tornado Tom ride their bikes up it, whilst the rest of the world’s best trod forlornly upward.

Back To The Bergs
A new addition to the race in 2007 was the the climb of the Eikenmolen in Sint-Maria-Lierde. A 600m asphalt climb with a maximum gradient of 12.5%, the riders will hit this hill after nearly 240km and as well as tired legs, there will be more than a few riders looking to take advantage of a place to attack before the…Muur.

Let’s Get Serious Now
As if the rest of the race has been easy, there is definitely a point where the race erupts, and often, that comes on the penultimate climb of the day, the Muur.

Perhaps the most famous of these climbs is to be found above the town of Geraadsbergen, in the Flemish Ardennes. The Muur (or wall) van Geraadsbergen (475m long, 475m of cobbles, 9.3% average gradient, 19.8% max gradient) is the 17th of the 18 climbs contested in the race and also one of the most important. While the Muur itself is “only” 475m long, there is a long cobbled drag up through the town centre that is not even classified as part of the climb, so when the riders hit the hill-proper it isn’t from a flat run in and they already have 243km in the legs. 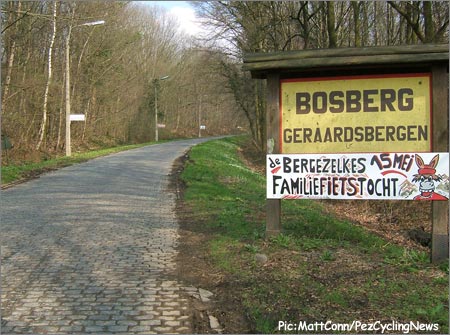 Regrouping after the Muur is never easy. With large groups rarely present to chase and the fast descent down from the chapel followed by the downhill run across to the foot of the Bosberg, (980m, 400m cobbles, average gradient 5.8%, max 11%) anyone not in the front group on the Muur, can forget winning the Tour of Flanders.

Throughout the 1980’s and 1990’s some cobbled sections of the route were in almost as bad a state as the worst sections of Paris Roubaix. In 2003/04 the whole of the top section of the Muur was dug up and the cobbles re-laid, giving a smoother run up to the chapel, but taking away only a small part of the challenge of riding the killer climb. 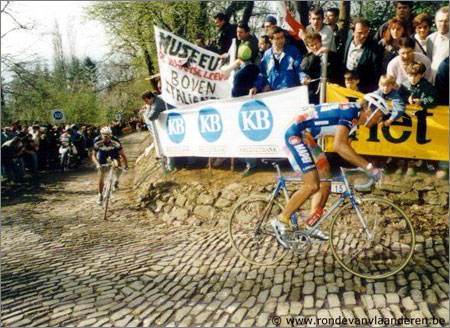 The legendary Muur has been the site of most of the winning moves in Flanders lore.

After the Muur, there’s only the Bosberg remaining, and after 150 miles of hellish racing, it’s plenty enough to break femurs. 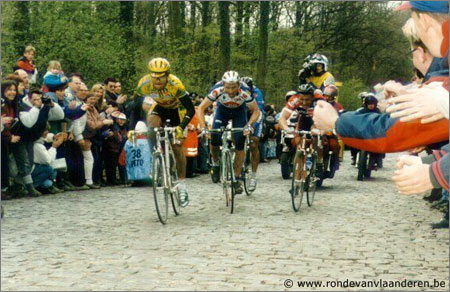 The Bosberg is the final hill coming with only 12k remaining, a final springboard, or one final lump to further soften the legs?

It’s only 12 fast kilometers to the line from the Bosberg, and by this point, the break is gone, there’s a futile chase from behind and we begin to debate who will win out of the small number of remainders…last year it was two.

PEZ has got you covered for everything Flanders this week – look for the CONTENDERS tomorrow to come out after De Panne finishes up in Koksijde.