Surprising all the big guns, and demonstrating that his form from two stage wins in the Tour of the Basque Country was still in his legs, High Road’s 29 year-old Kim Kirchen of Luxemburg took victory in a wet Fleche Wallonne on Wednesday afternoon atop the savage Mur de Huy.

Living up to his ‘always the bridesmaid’ tag in second place was Silence-Lotto’s Australian Tour contender, Cadel Evans who looked to have it won until Kirchen found the extra speed on the drenched tarmac that it takes to make the record books. Pre-race favourite, Italy’s Amstel winner Damiano Cunego was third; one thing is for sure, he couldn’t blame his Lampre team – Paolo Tiralongo in particular worked like a dog to get ‘The Little Prince’ into a winning position. 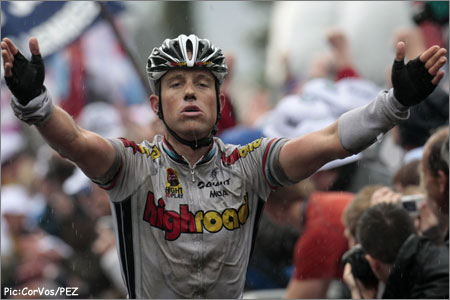 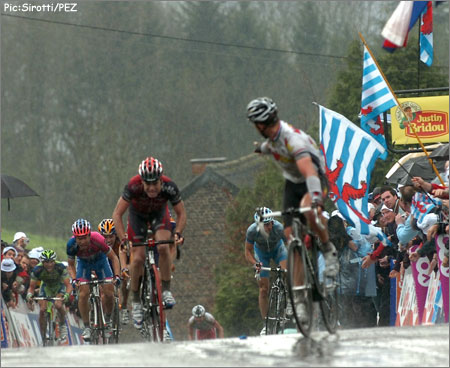 And the moment of the day? Kirchen’s look back at this pursuers…taunting? or maybe just grateful recognition of a huge win and who he beat? I’m not judging.

Rabobank’s dynamic duo of young orange stars Robert Gesink and Thomas Dekker took fourth and fifth respectively. Completing the top six was PEZ tip, Davide Rebellin (Italy & Gerolsteiner) who had looked comfortable coming in to the last two hundred metres but had no answer to the younger men who swarmed past him at the top – maybe he’s finally feeling his 36 years? 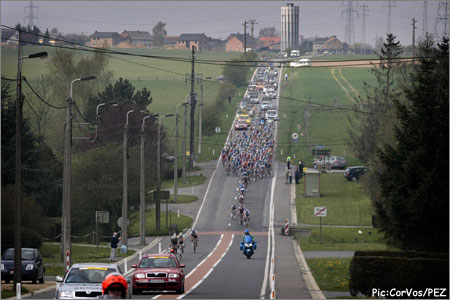 The break of the day went at around half distance of the 199.5 kilometres, a big group of some 20 riders – too many to be truly effective and by the time rains came at around 60 K to go, the gap was down to one minute and riders began sliding off. Most noticeably Het Volk winner, Philippe Gilbert (Belgium and F des J) who sat-up on the Cote de Thon climb with 52 K to go. 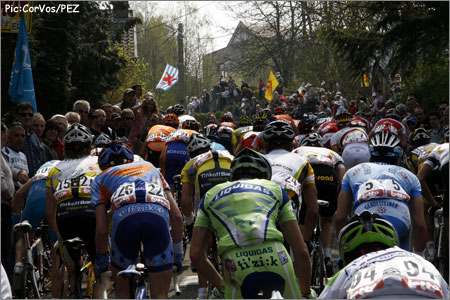 This was also the spot where two of the three CSC’s in the break – Andy Schleck (another of those talented Luxemburg riders; the place only has a population of 465,000) and Dane Nicki Sorensen plus lively Lotto Belgian, Jurgen Van Den Broeck decided that things needed streamlined and thrashed off into the murk. 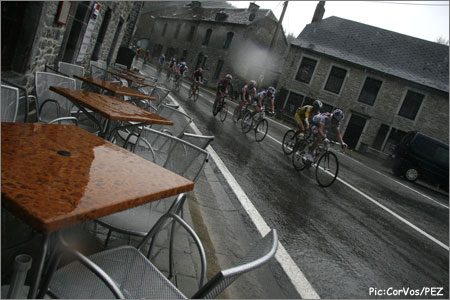 These three provided the core of a group of riders – comprising survivors of the break and those who had the strength to bridge up from the bunch – which ebbed and flowed until the race reached it’s truly decisive phase.

This came at 20 kilometres to go and at last gave a clear pattern to the race as Milram’s Andrei Grivko gave a demonstration of why he was 2006 Ukraine time trial champion; steadily grinding big geared time into the break and the bunch. The break was doomed though; the rain and heavy roads breaking hearts and legs, whilst Grivko left a trail of spume behind him like a runaway killer whale. 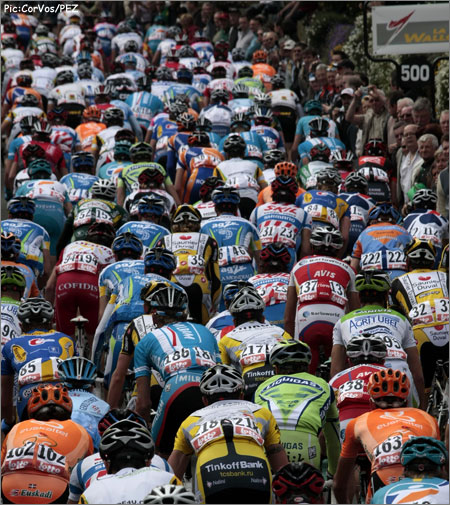 At 15 kilometres the much depleted bunch absorbed the break and there was just Grivko to hunt down. On the Cote D’Ahin it wasn’t so much that Grivko cracked, more that a bunch riding for the ‘capo’ in the finale of a classic takes a lot of holding off; there were 12 K to go when the Ukrainian succumbed.

It was CSC again to the fore here as they fired tall, stylish Swede Gustav Larsson up the road; that big tattoo on his calf must be real – if it wasn’t, that deluge would have washed it off. Bridging up to the big man was a man in grey, it wasn’t an LPR jersey, it was Fabian Wegmann’s (Gerolsteiner) usually gleaming white German champion’s outfit – there’s still a lot of coal dust on the roads in these parts. 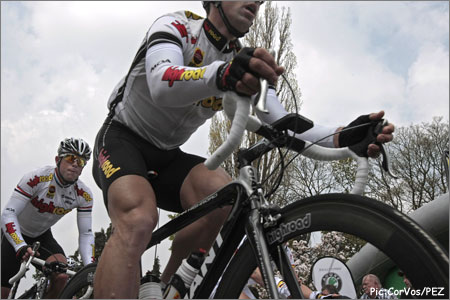 Making it three up front was Alexander Efimkin (Russia & QuickStep), whose brother Vladimir (AG2R) had been an agitator in the big break, earlier in the day. The three worked well together, the time gaps were building nicely; 12 seconds at nine to go, 18 at eight, 19 at seven and it was just possible that there would be no mass grind up the Mur – despite the efforts of the little figure of Tiralongo, who was most definitely justifying his salary from Lampre.

At six to go disaster struck for CSC as Larsson came down hard coming into the tight left hander that brings the riders off the hills, down onto the valley road which drops to Huy – and the Mur. Efimkin had to resort to BMX tactics – left foot on the tar – as he wrestled with his Specialized, to avoid Larsson. 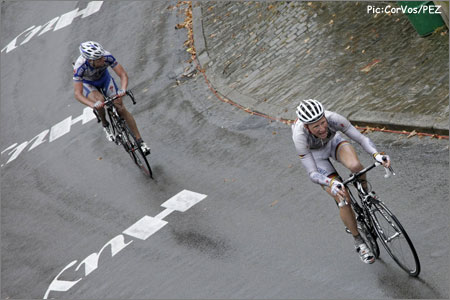 Nobody had to tell Wegmann that this was his chance and he was off, head down, big gear engaged; cold, dirty water sprayed over his head as he headed for that last evil kilometre. At the red kite the bunch eased and just for a moment, it looked like it may be Efimkin’s day as he looked like he was going to get up to and past Wegmann. 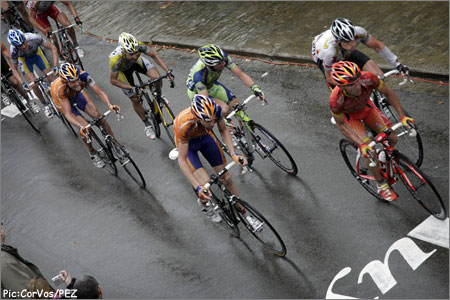 But there aren’t many fairy tales in classic finales and the stampede, led by Evans saw the two escapees dreams washed away in the rainwater which flowed down the Mur. 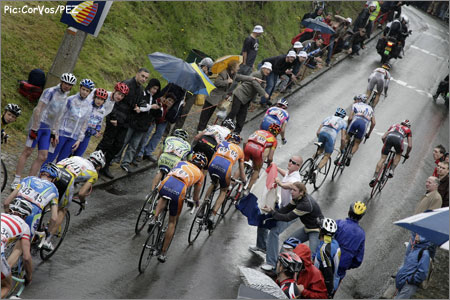 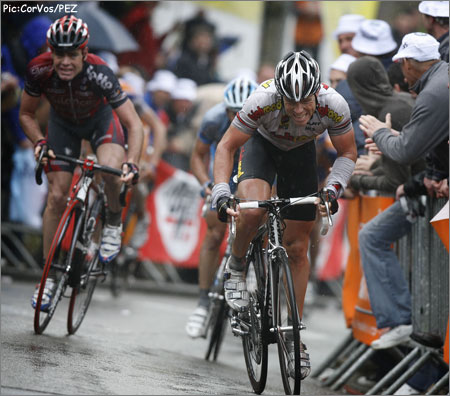 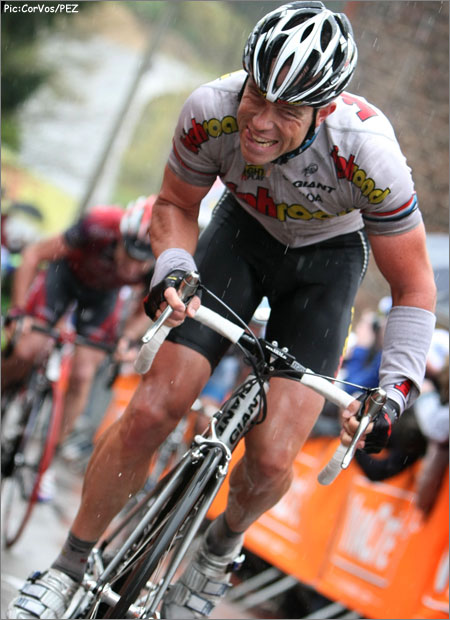 Maybe Evans will be regretting that long, long lead-out? 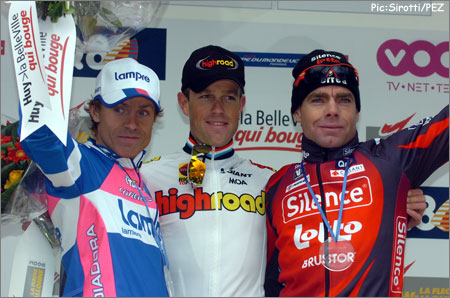 Rapha’s Guide to the Great Road Climbs of the Pyrenees