Once again, the mid-week little brother race goes beyond all expectations. With the Tour of Flanders and Paris-Roubaix getting all the attention, Gent-Wevelgem comes over all child prodigy with an absolute belter of a race!

The orange-clad rocket, Oscar Freire, gave a sprinting masterclass to take the win, casually switching across the road with 250 metres to go, and shutting out all his sprint rivals. The supersmart Spaniard left Aurelien Clerc and Wouter Weylandt to wilt in the breeze as he cruised along the barriers for a big win. 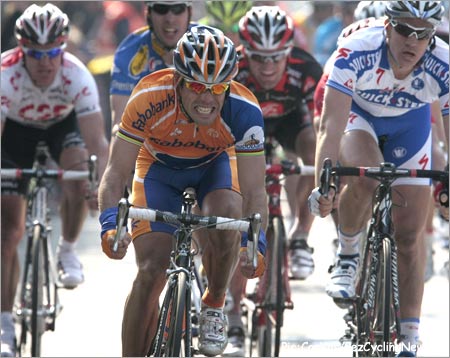 Oscar Freire was up to his old tricks – namely riding really fast when it’s least expected,

Rabobank sent a message out that they’ll be there when it counts on Sunday with another strong showing. They controlled things when they had to work, and pulled back a couple of dangerous big-name moves to put Oscarito into a winning position.

After the crap storm of weather that was hurled at the Tour of Flanders peloton last Sunday, it was a much nicer trip this afternoon. Dry and sunny, but still arm-warmer weather for many.

Ermanno Capelli from Saunier Duval had plenty of air time as ‘Kop van de wedstrijd’, opening out a ten-minute lead, and spending the best part of 70kms alone up front. He was the lucky guy who got given his head after a couple of abortive expeditions into the wild early on from the likes of High Road’s Servais Knaven.

Also active was Artur Gajek of Milram – one of only two riders from that team riding today after the Milkmen’s fairly catastrophic performance at the Hel van het Megelland last Saturday brought on a hissing and screaming ‘dressing down’ from the DS.

Things got twitchy as the race approached the Kemmelberg for the first time, with last year’s calamities etched on the subconscious and scratched on the skin. With some dodgy cornering, a couple of minor tumbles and the line starting to stretch out, the peloton was onto the climb.

57kms to go, and Pozzato and Breschel open the gap off the front as they stamp up the climb. We’re really interested in the descent though – everyone survived as the peloton made like the Eagles. They took it real easy, with a two-abreast trundle down the new road layout. 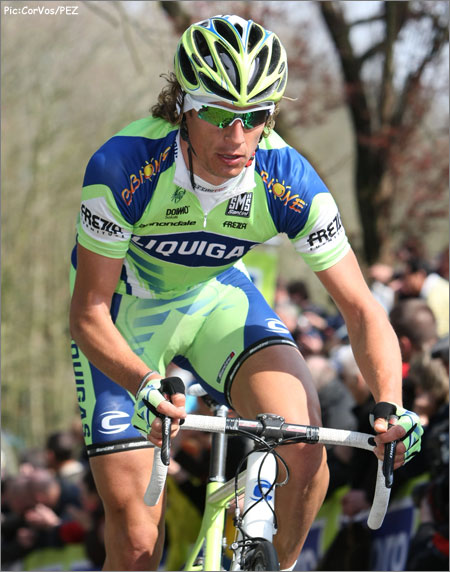 Filippo Pozzato looked good once again today…but there was nothing doing for his aggressiveness this time around.

Pippo and Breschel stretched away on the descent, and Phillipe Gilbert went solo to haul himself up to them. It took him a while with Pozzato drilling it – you gotta remember that these two really don’t see eye-to-eye. The Italian always seems to take any opportunity to make life tough for his Walloon contemporary.

With Liquigas, Francaise des Jeux and CSC off the front, it was up to the other teams to get their act together. Credit Agricole and High Road came up to lift the pace. The face of the race changed with 38kms to go and Breschel picked up an unwelcome puncture, and waited for the peloton.

36kms to go – Capelli is struggling up the Kemmelberg for the third time, being chased by ….. the arch rivals Pozzato and Gilbert, side by side. Behind, Flecha launches a trademark missile up the climb, but it came to nothing. 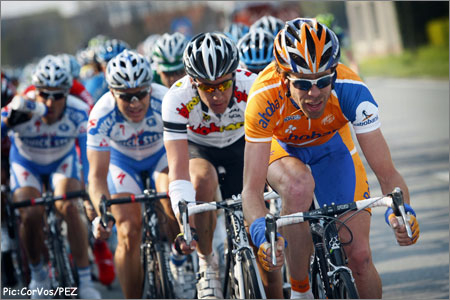 Rabobank, High Road, and QuickStep were hell bent on a bunch sprint, and they got it.

Pippo and Phillipe finally nail Capelli with 27kms to go, but two minutes later it’s all bunched up and the sprinters are starting to flex the muscles.

The next guys to make anything significant happen are Kurt-Asle Arvesen and Martin Elmiger. They go clear and are caught by Stuey O’Grady, Mnauel Quinziato and Frederic Guesdon with 10kms left. With two CSC guys there the cards are in their favour. 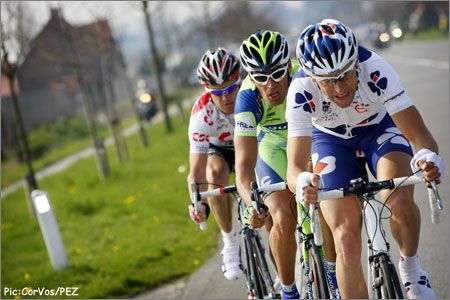 Guesdon, O’Grady, and Quinziato held out for awhile, but they were reeled in with 2k to go.

But it never looked like they would hang clear. The lead hovered around the seven second mark, and although you could see all the effort going in, HighRoad and Rabobank were drilling it along on the front of the bunch.

5kms to go, and there was just 5 seconds between the escapees and the lined-out bunch as they rocketed into Menen.

O’Grady jumped past Arvesen with 3kms to go, followed by Quinziato. HighRoad definitively nailed things down for the sprint with just 2kms left and they turned to Cavendish. He was nowhere to be seen though as Friere showed the other sprinters how it’s done. 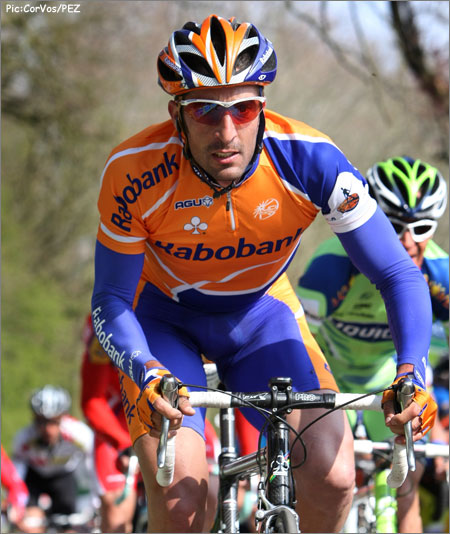 Super stuff from Freire, and Rabobank look nicely tuned for Juan Antonio Flecha at Roubaix on Sunday. Super stuff, too, from PEZ favourite Bert Roesems, back on the front of the peloton and driving things for Silence-Lotto. 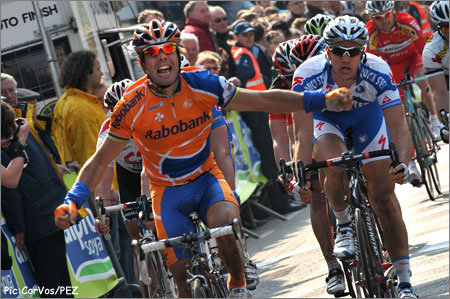 Keep it PEZ for all the fall-out from Gent-Wevelgem and the build-up to the big one on Sunday. Don’t touch that dial!