With Etoile de Besseges, the Ruta del Sol and other races pushing at the door of the new season, Het Volk comes along and boots it open. The big-time Euro races are back, baby! It was wild and windy for the first semi-classic of the season – and we mean the racing action as much as the weather!

The winner’s bouquet is grasped firmly in the hand of now two-time champion Philippe Gilbert after a breathtakingly impressive ride. Attacking solo in pursuit of the breakaway group, catching them for four minutes in a solo chase, then jumping away alone again with 21 kms left. His reception on the podium showed just how popular Gilbert is, and how much the fans appreciated his ride. 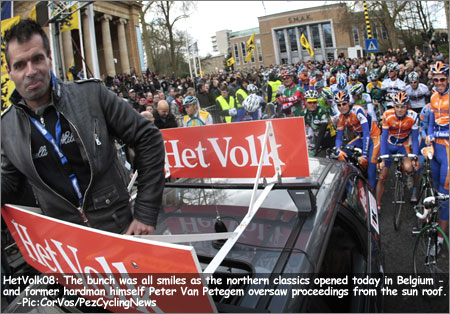 Behind a group of names failed to organise themselves, all of which played into Gilbert’s hands as he battered away.
Defending champ Pippo Pozzato was absent, building his condition in Spain, but Liquigas made sure they got plenty time on the front with Aleksandr Kuschynski in the break of the day. Along with him were Minard (Cofidis), Krivtsov (Ag2r), Gerard (Francaise des Jeux), Boucher (Landbouwkrediet) and Michael ‘Meatball’ Friedman from Slipstream.

With their lead slashed thanks to QuickStep especially on the run-in to the Taaienberg with just over 50 clicks to go, the break had little chance of staying clear. Bizarrely, though, Tom Boonen and company simply melted away after Wilfred Cretskens tumbled over and bumped Paolo Bettini off – no QuickStep riders finished in the top 20 or within 4 minutes of Gilbert!

Approaching the Eikenberg, 50kms to go, Gilbert took off alone in pursuit of the leaders. It looked like a mad-cap manoeuvre but he started eating into the lead. Big-time regrets for Nick Nuyens who was on his wheel when Gilbert jumped, but the Cofidis man just couldn’t hold his flying rival’s wheel.

Behind there was a lot of organising to do, before Fabian Cancellara, 2005 winner Nick Nuyens, Leif Hoste, Thor Hushovd, Allan Johansen, Jan Kuyckx and Nicolas Jalabert got clear after him.

Gilbert slashed into the lead and picked up Krivtsov first, before Arnaud Gerard dropped back to offer assistance. In short order, he was up to and through the leaders.

The impressive Belgian motored away – under 20kms to go, Gilbert was 40 seconds clear, with the fractured remains of the lead group being picked up by Cancellara and co.

Gilbert took his great form from his Challenge Majorca win to this race, and even though his shoulders were rocking with every pedal stroke, he was going further away.

CSC had two men in the chase group, but although Cancellara looked strong, Johansen was really gritting his teeth, and not too many others seemed too keen to help them – 15kms left and the gap was out beyond a minute. 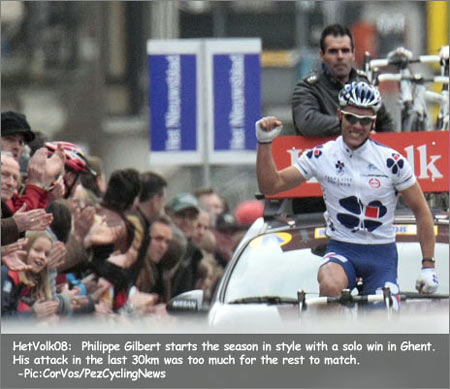 Gilbert was jumping from the drops to the tops of the bars, the middle of the bars, and then down again to try and alleviate the pain of his great effort. Marc Madiot steered the team car up alongside to offer encouragement, and to block the wind a little?

It all helped, and Gilbert completed the final U-turn and drag up to the finish line with plenty of time to enjoy a second Het Volk win.

By the time the chasers were struggling over the line, Gilbert was topless and getting a nice freshening rub from a very attractive female soigneur – the perks of the job!

A blistering performance from a young man who could, conceivably, win any of the spring Classics and is getting stronger with every season. Keep it dialed to Pez for all the follow-up features! 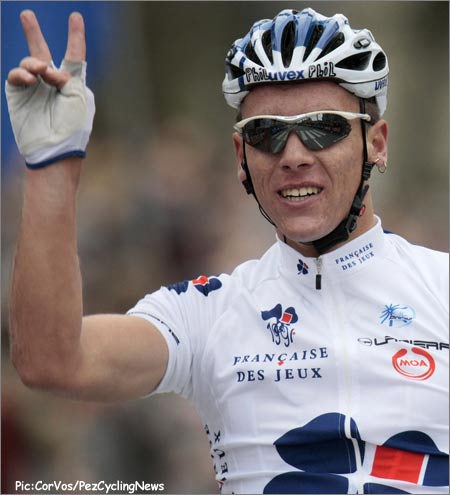 Gilbert is cucumber cool as he crosses the line…