If you want to win races, it pays to be smart and the new champion of Kuurne-Brussel-Kuurne used all his years of experience to outsmart a young gun. QuickStep took control of part two of this semi-classic weekender and took out the win but Tom Boonen wasn’t first across the line!

The flowers and face time on TV go to Steven De Jongh who was in exactly the right place at the right time 3kms from the line. He got a free tow all the way to the finish before jumping past young Dutch talent Sebastien Langeveld to take a smart and easy two-up sprint. 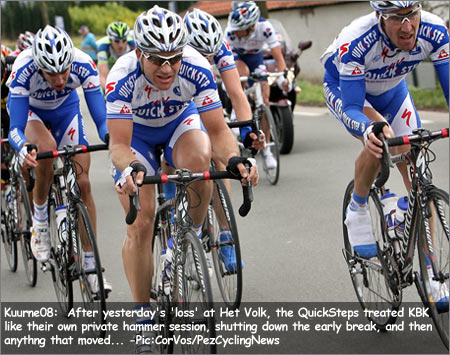 The 34-year old took out a second KBK win in fine style meaning that QuickStep can go away reasonably happy. They pulled off a respectable salvage job after yesterday’s meltdown at Het Volk. None as happy though as De Jongh’s family who will have to find space for the bizarre ‘donkey head’ trophy he got handed on the podium!

KBK isn’t quite the hellish ‘hellingen’ fest that Het Volk is, but with another windy day, a few showers coming in and out and the traditional gravel, mud and oil that coats the rural roads of Flanders in full effect it was a hard day at the coal face for the peloton.

Nine men got clear including Manuel Quinziato of Liquigas and CSC’s Matt Goss, Jeremy Hunt (Credit Agricole) and Slipstream’s Steven Cozza. Behind them, things got interesting with 80kms to go.

Somebody must have stuck a rocket up the collective QuickStep backside as it was the white and blue crew who shaped the race – a blistering team time trial-style acceleration split the main field, and once things had settled down they had a magnificent seven in the front, all of them hammering for Tom Boonen.

What had been a gap of over 90 seconds to the lead nine was sliced away in mere moments as Boonen’s boys drilled towards the Oude Kwaremont.

Liquigas later lent a hand to further shatter what remained of the field. A pile-driving acceleration left echelons all over the road which caught out yesterday’s podium getter Thor Hushovd. It was a now a question of whether anyone would be smart enough to form an alliance to defeat QuickStep.

Nicolas Jalabert was following his good ride at Het Volk yesterday until a spectacular face-plant with 16kms left – he managed to claw his way up to the leaders again, but he will be SORE tomorrow. 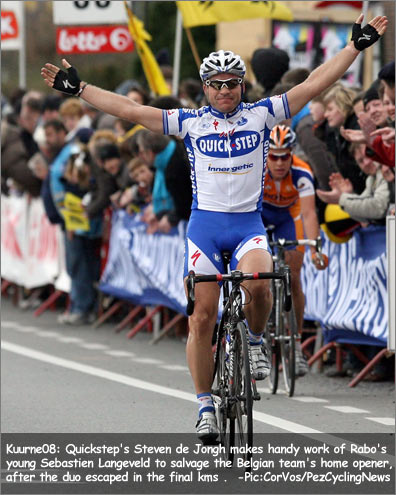 12kms to go and the attacks started coming – Juan Antonio Flecha launched the first move shelling only Van de Walle of QuickStep. Two clicks later, Karsten Kroon went with Borut Bozic but when Devolder and Steegmans jumped across for QuickStep, there was no chance of the Dutchman getting away.

Constant attacks up the gutters and at every roundabout – seven kms to go and the lead group of twenty was elasticated into one long, loooong line. Six kilometres to go and Hoste sped down the left as QuickStep tried to regroup – once again it was Devolder shutting things down.

Gert Steegmans jumped past Devolder and found himself in a real drag race before getting up to the Silence-Lotto man. Four kms left, and it all came together again.

Two kms left – Langeveld of Rabobank is away, with De Jongh sitting on his wheel. Boonen is looking worried in the group as Hoste tries again to get across and blows up spectacularly. With no organisation behind, De Jongh sits like a contented cat toying with a mouse before sticking it to Langeveld with 100 metres left.

Matt Goss pulls off his best career performance to date by nailing third ahead of Boonen. The young Aussie said: “It was a good race, it’s been a pretty good day, I suppose. It was a pretty long day …. I still had good legs at the finish. I’m not sure (I could have won a sprint for the win), it could have been different altogether if there hadn’t been two guys already away.”

Great ride by De Jongh and QuickStep, but even with such strength in numbers, riders were willing to attack them. Liquigas also had four men up front today, so it all bodes well for a cracking Classics season. 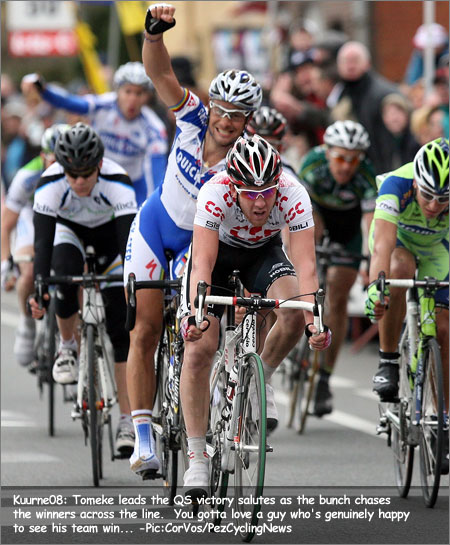 Lots more crashes today, unfortunately: Silence-Lotto’s Bart Dockx forced out with a broken pelvis. He came down in the same spill which landed Aussie champ Adam Hansen (among others) in hospital. Paolo Bettini had another miserable day, wrecking after only 9kms and heading home.

Keep it Pez for your finest continental coverage!