It started not too long ago with Milano-Sanremo, then rapidly moved on to the Cobbled Classics of Franco/Belgium, and then only a week squeaked by before we headed to the Dutch hills. And finally, at long last, the Spring Classics will come to their rightful conclusion with La Doyenne on Sunday. PEZ takes a look at the classic course and the contenders.

The Spring’s final Classic is also the oldest of them all. La Doyenne was run for the first time WAY back in 1892 – further proof that Belgium has been cycling mad for longer than anyone cares to remember. The race is essentially an out and back affair, leaving the suburbs of Liege and heading south to the World War II epicenter of the Battle of the Bulge: Bastogne. The out part of the loop is not too terrible difficult, a few climbs pop up, but nothing like the evilness that will come in the latter half of the race. 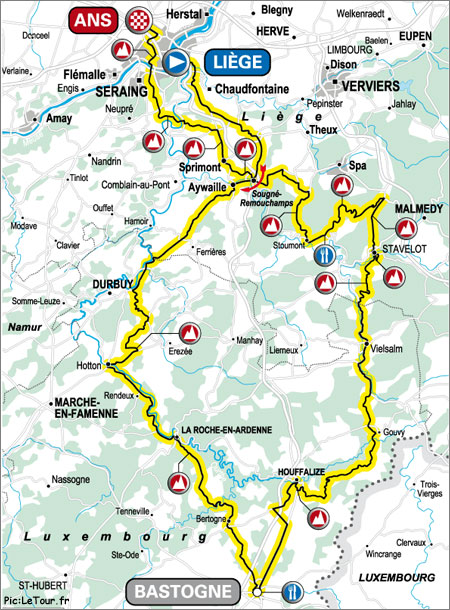 Fairly simple – out and back. This map looks nothing like Amstel or Flanders.

The outward bound journey to Bastogne is normally a long warm-up for all except for the early break. The easy ride ends on the return flight to Liege though…and by the end of the easy riding, I mean there are a lot of climbs. The last 80k sees 9 out of the day’s 12 climbs.

Stretching The Legs
An early break will gallop away sometime in the first hour, either painlessly in the first couple of minutes, or after some kind of struggle to make sure the breakaway artists have to work hard and earn their spot at the whipping post for what will most likely be at least 100 miles out front. Like nearly all of the Classics, the festivities are reserved for the final segment of the race – 9 significant climbs in the final 80 km of the race. 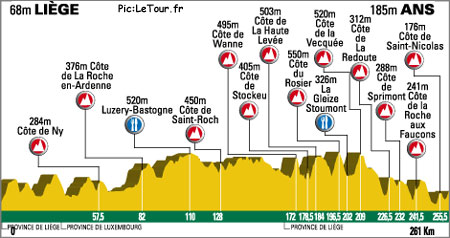 Getting The Party Started
The climb that usually initiates the business part of the race comes after 173 km – the Cote de Wanne. From there they follow in rapid succession, with such luminous ball-breakers as: the Stockeu, Haute-Levee, Rosier, Stoumont, Vecquee, La Redoute, Sprimont, Sart-Tilman, Seraing, St. Nicholas, and the final uphill drag in Ans. 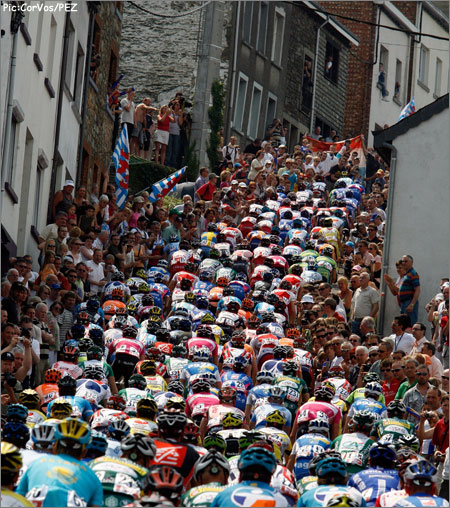 The Cote de St. Roch comes early on, and is the shortest of the race, but it’s also the most photogenic. 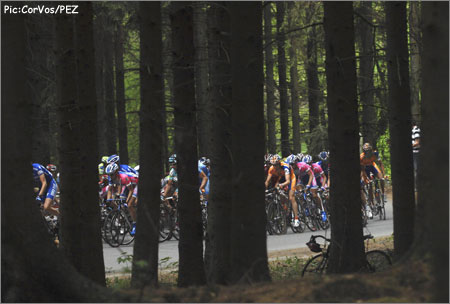 The Belgian Ardennes is some of the most beautiful countryside in all of Europe. 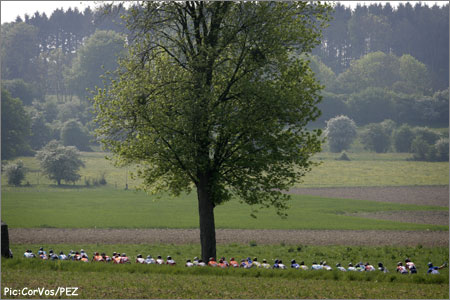 Climbers Come To The Fore
The undulating countryside of the Ardennes presents the final evolution of the climbs of the Spring Classics – they went from the short, race-deciding capi of Milano-Sanremo, to the short, super steep, cobbled climbs of Flanders, to the slightly longer, steep climbs of Amstel Gold. Fleche Wallonne provided a preview of the Liege climbs, but Liege culminates the progression with longer climbs topping out at around 4 km, but the toughies are still short and steep: La Redoute is only 2k, but it’s ridiculous – with one section topping out around a bajillion percent. 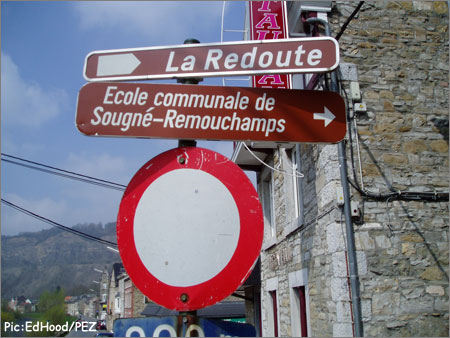 The sign that makes everyone gulp, take a deep breath, and check to see how big their cojones are. 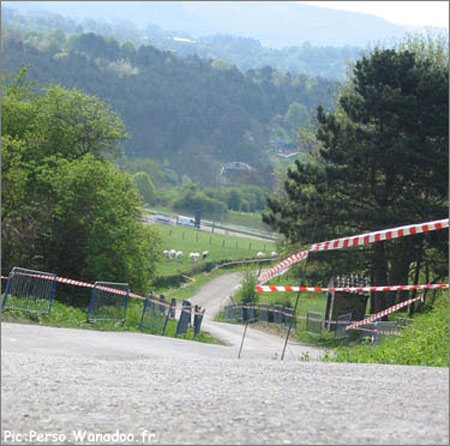 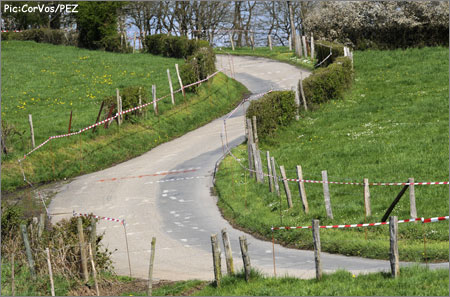 La Redoute is one of the most feared climbs in bike racing. 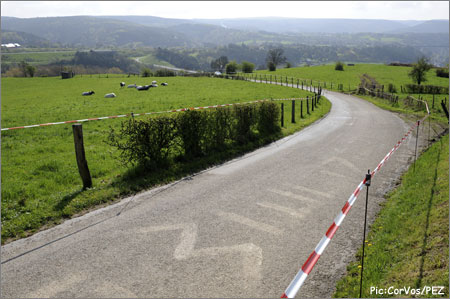 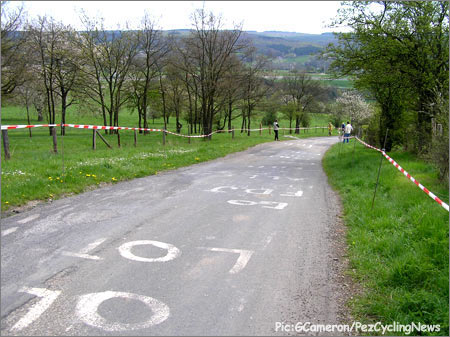 Survival Of The Fittest
The very hard parcours of Liege-Bastogne-Liege causes a slow, agonizing whittling-down process, where eventually only the strong remain (yeah, ouch, cliche alert), and only the real bad ass can make the race-winning move. Most of the time it’s a small group that does the deed – the past couple years have seen decent groups approach the final climb.

Last year, Danilo Di Luca wrested himself from the grasp of the group in the waning kilometers and managed to hold off Alejandro Valverde and Frank Schleck. We won’t be seeing any of Danilo Di Luca in 2008 though – the Killer’s doping suspicion was more than enough to keep his LPR team from getting an invite. 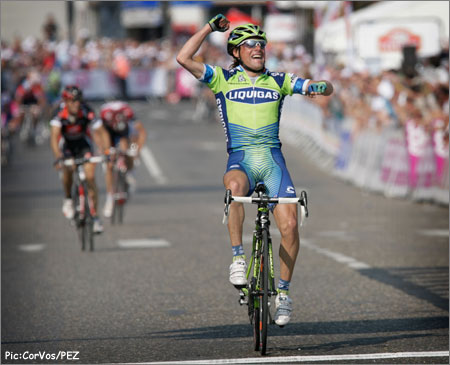 In 2006, the victory went to sprinter/climber extraordinaire, Alejandro Valverde. Valverde was the best in the small group finish and took his first Monument. 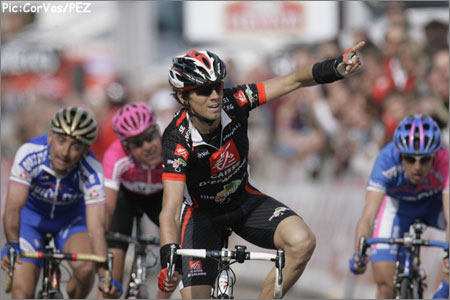 In 2005, two of the most aggressive racers in bike racing (well, one of them isn’t racing anymore, and I’ll let you guess), Jens Voigt and Alexandre Vinokourov pulled off the rare breakaway feat and held off a hard racing field to duel for the win amongst themselves. 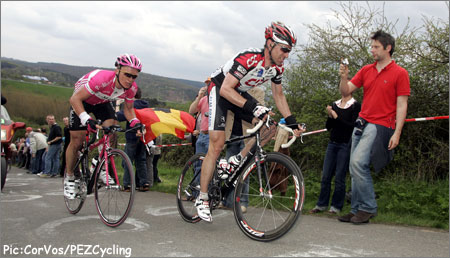 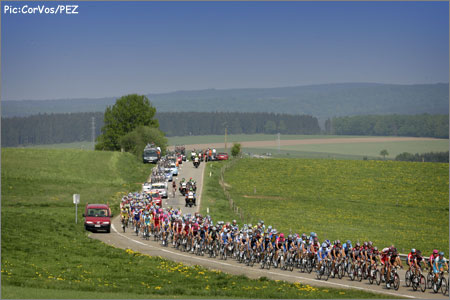 As Barry Hoban remarked – LBL is a wearing down process, the field, seen here is still large – it won’t look like this when they finish in Ans.

Make Your Move Late?
The old timers rue the changes at LBL. It used to be that the decisive moves were made around the Stockeu or the Wanne, but the deciding point has moved ever-further back. For awhile, La Redoute was decisive, but now, even that fearsome cote doesn’t do the job. For the deciding moment, we push ever further back to the final two climbs, the St. Nicolas and the Cote D’Ans. We still hold out hope for carnage and melee. If the race is driven hard and aggressively, hopefully the selection will come earlier and carnage will reign supreme. If it comes earlier, the climb of La Redoute would be a lovely place to make the difference. At least, that’s the storybook scenario.

The fields continually get stronger though, and the elite group of climbers gets bigger and more able. 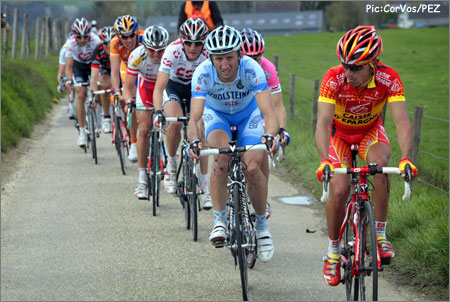 Do not be surprised when you see a group that looks much like this dominating the finale of LBL…plus Cadel Evans.

And Finally: The Contenders
This one’s pretty simple folks – look at your animators from Amstel Gold and Fleche Wallonne. Yeah, there might be a couple of surprises, but that’s highly doubtful – the cream has already risen to the top: now they will duel amongst themselves. 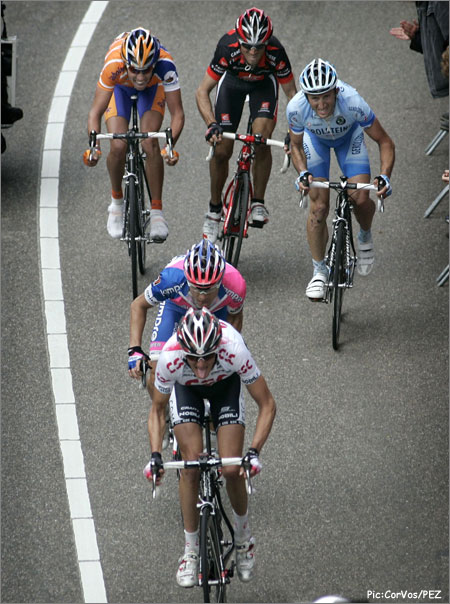 It would not be at all surprising for the finale at LBL to shape up like the one at Amstel.

First off? Damiano Cunego. Cunego has a 1st and a 2nd already this week and he’s showing no signs of letting up: 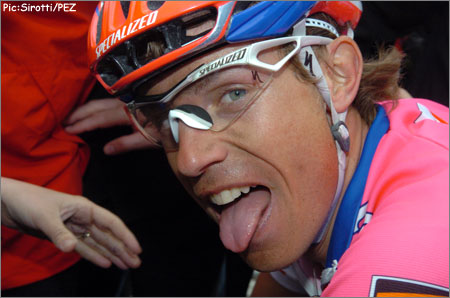 With the finale of Amstel still in mind (I don’t mean to sligt Fleche, but La Fleche doesn’t have that crucial final 50k, which we all know is just that: crucial) we can look next to one, Frank Schleck. 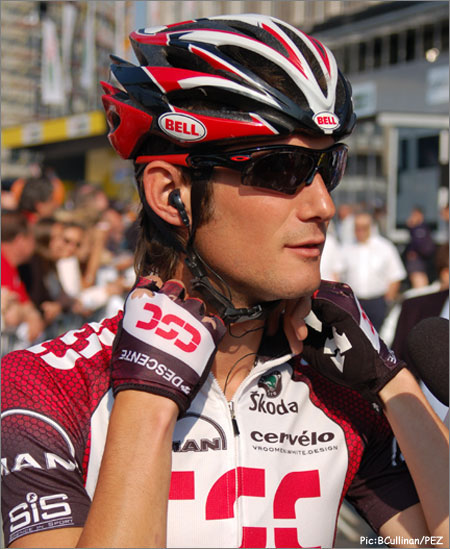 Next up, the perennial favorite, Davide Rebellin. Rebellin has come up a bit short so far, but a ‘bit short’ still means all top 5s for Gerolsteiner’s top guy. Tin Tin has just as good of a chance as anybody here come Sunday. 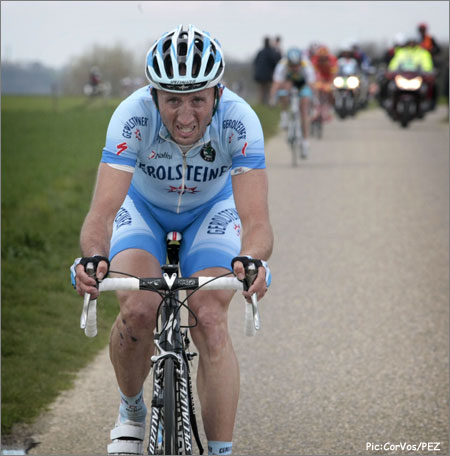 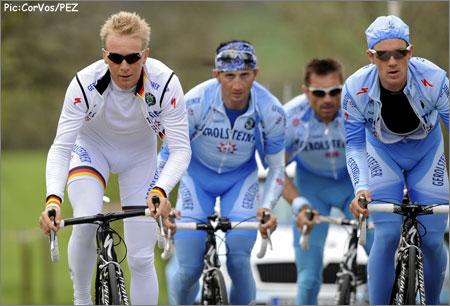 Rebellin won’t be hurt having the likes of Fabian Wegmann at his side – the German champ is going strong and he’s always aggressive.

The talent pool at the top of the LBL favorites list is so thick, former winner, big time sprinter, mountain goat, and any other superlative you can muster: Alejandro Valverde, is again, a big possibility.

Coming back after a very untimely rib injury at Pais Vasco, two time winner Paolo Bettini, is hoping to salvage something from the Ardennes Week. We have absolutely no clue how he is, but if he’s anywhere near 100%, he’s a winner waiting to happen. It seems almost insulting to say he’s my sentimental pick. 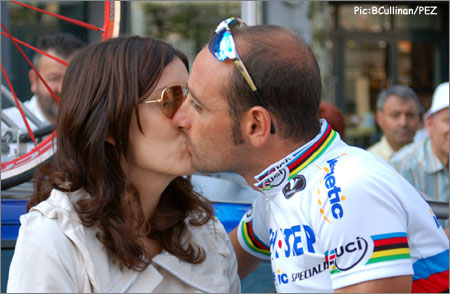 And of course, there’s Kim Kirchen who just got done reeling in the biggest win of his career on Wednesday. 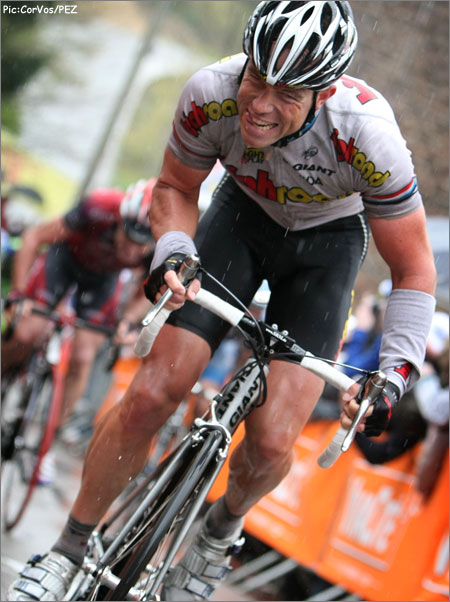 My Pick?
I’m going to go with Cadel Evans for some reason. He finished an excellent 2nd at the race I semi-dismissed just a few lines ago: Fleche Wallonne. I think that out of all the races that would NOT favor Cadel though, it would be Fleche Wallonne. LBL plays out on a much, shall we call it, GRANDer scale, and I think that the ever bettering Evans might just find himself in with a big time shot at a Monument come Sunday. 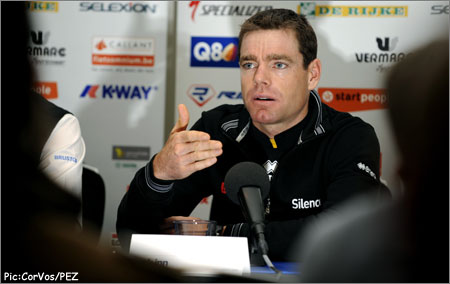 As Always…
Don’t take my word for it, Unibet pays people to come up with odds that are competitive and fair, so I’m guessing they know a wee bit more on the topic than I claim to: 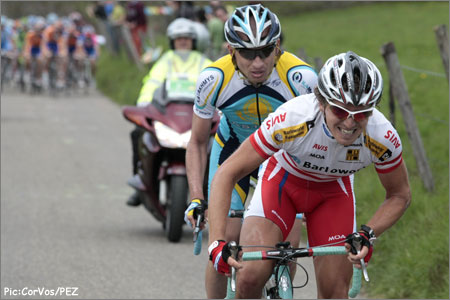 I like Christian Pfannberger as well – he won’t win, but expect to see him Top 10…maybe even getting a crack at a Top 5.

In Summary…
Grab yer wheelbarrow and as much beer as it can hold! 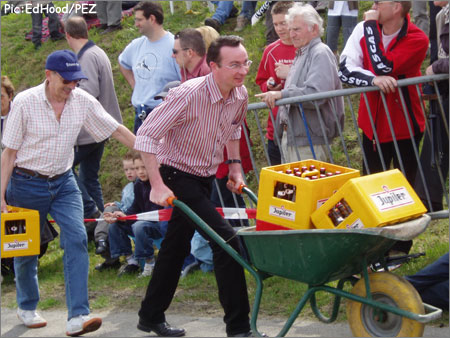