One more big day of racing, one more Monument, and then the 2008 road season will be in the books. By many accounts, one of the most beautiful Classics, the Giro di Lombardia is as hard as it is gorgeous. It constantly produces quality winners and thrilling finales. Let’s take a closer look at the course and the riders to watch this Saturday.

Now that we have the details of the arduous circuit of Lago di Como taken care of, we can get to the business of picking a winner for Saturday. 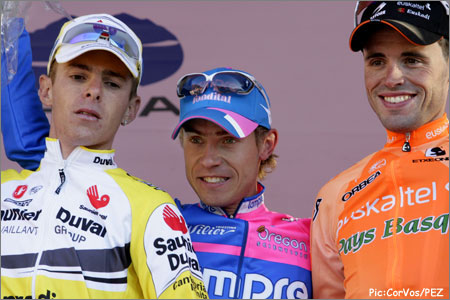 Cunego beat out the disgraced Ricco in the two-up sprint for the win, with Sammy Sanchez taking the small group sprint for 3rd.

Look No Further Than Last Year
Damiano Cunego and Riccardo Ricco attacked simultaneously on the Civiglio and never looked back. The two earned the right to decide the race between themselves, and Cunego dutifully stepped up to show that he’s one of the quickest climber sprinters around. 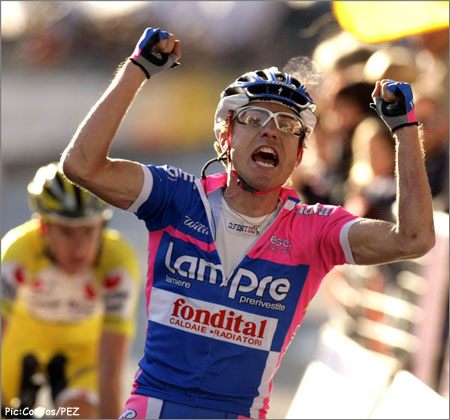 Of course, Cunego had the 2004 Lombardia title to his credit, so that’s two already for the Kid, and after his great Worlds ride methinks this is a race absolutely made in heaven for Cunego.

It seems logical to look at Lombardia and think LBL. Both have a lot of climbing, both favor climbers (duh), and those little punchy types always seem to prevail. I’d say that Lombardia favors even moreso the climber than LBL. Liege does not have any 10k climbs – Lombardia does, namely the Ghisallo. It takes a legitimate climber to get over the Ghisallo when the hammer comes crashing down. We’ve seen it the past few years as the once mighty field is whittled down to a very select group, and then the Civiglio shatters that select group and gives us the winning move. 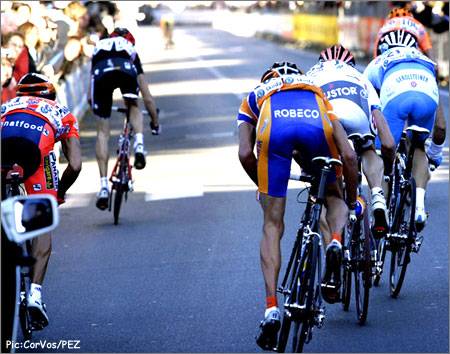 We’ll probably see a small group sprint that looks something like this on Saturday.

There’s no reason to think that won’t be the case this year, and without Ricco, it seems pretty logical that Cunego will win. Ok, I’m not that simplistic. 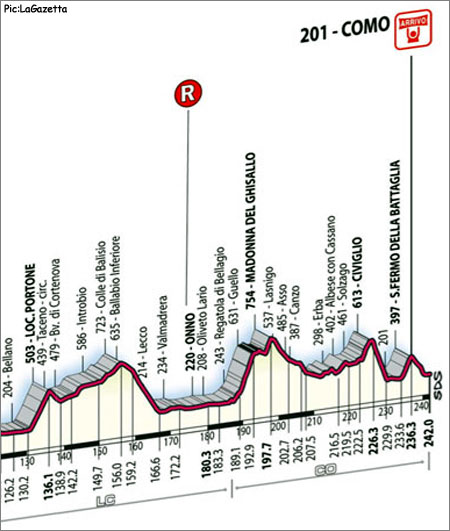 The profile for the part of the race that counts…

He’s Long Overdue
I think the Kid (who isn’t really much of a kid anymore) is definitely the prohibitive favorite (as it should be when you’re the defending champ and in good form), but there is quite an interesting list of possibilities right behind him. 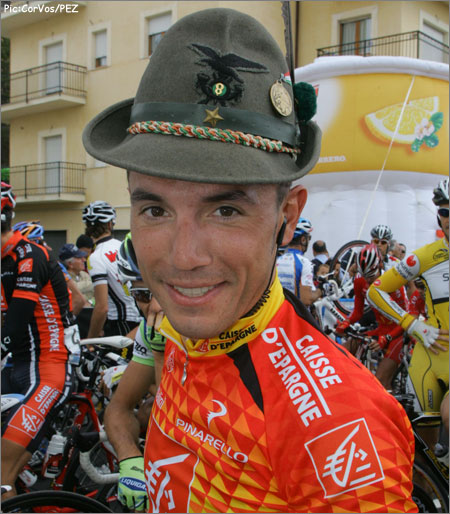 My not so dark horse pick for Saturday is Caisse D’Epargne’s Joaquim Rodriguez. Rodriguez has been a stud all year – he has shown over and over that he can climb with pretty much anybody (remember the Angliru?), and he has the finishing kick to make it happen on the line. I think he’s long, long overdue for a big win. Why not Saturday?

Oh, But Then There’s Sammy
Sammy Sanchez finished a lovely 3rd last year, and even moreso than Cunego or Rodriguez, this finale might suit him like a custom-fitted Pinarello from the man himself…except Sammy rides an Orbea, whatever. Anyhow, Sanchez can get over damn near any climb you throw at him when he’s going well, he can sprint with the other little sprinters (that means you Cunego), but what he can do better than pretty much any rider on earth? Descend. 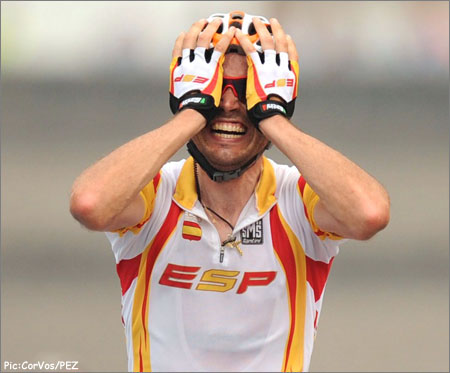 Yes, indeed, Sammy Sanchez is the demon descender we all love to rave about. He can do something that most of us can’t even fathom. Sure, you can try to ride 400+ watts for a minute or so and get a feeling for what it’s like to be THAT fast, but can you honestly take a turn like THE Sammy Sanchez? I can’t. I can’t speak for you though. Well, for Senor Sanchez, there’s a nice descent, a really technical descent off the penultimate climb of the Civiglio – it’s frightening to most, but Sammy probably dreams about it.

Wouldn’t Lombardia be a nice addition to that Olympic road race win? 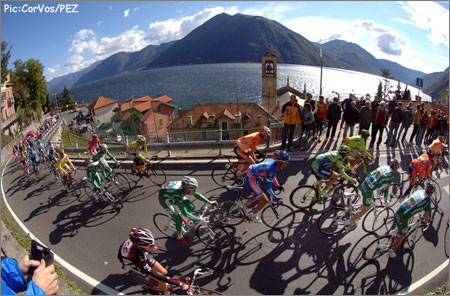 The CSC Boys
CSC has an excellent quiver to draw arrows from this weekend. Andy Schleck, Alexander Kolobnev, and Karsten Kroon will head up the super-team, and if one of them doesn’t at least make the podium, it will be a major surprise. 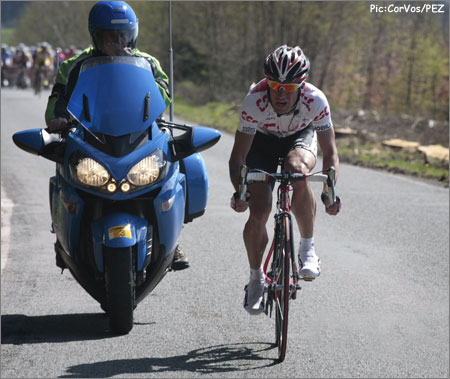 Kolobnev, like Rodriguez, is overdue for a big win. L’Eroica was a great win last year and a number of huge race podiums are swell – but he’s going to win a big’n soon, and it could well be Saturday. He seems to be a unique rider in that he can kill the hard man type courses (think Eroica, Northern Classics), but get over pretty much any hill in the hilly races (think Worlds and Olympics) – he’s getting better and better…and he can sprint just fine. 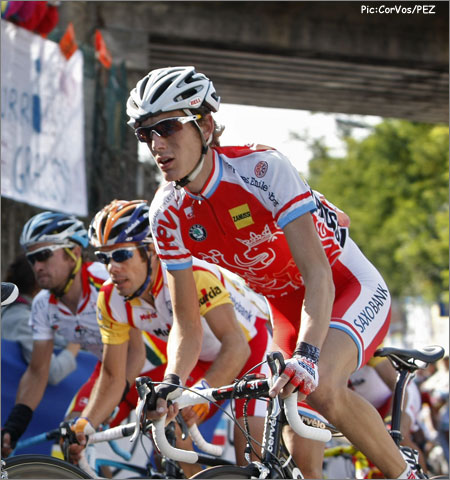 Andy Schleck can climb with Tour winners and will probably be a Tour winner someday, but he can’t sprint to save his life, so his odds are only good if he’s solo or if he’s leading out a teammate, someone like Kolobnev. If he climbs like he did in the Tour, who is to say he can’t ride away all by his lonesome. 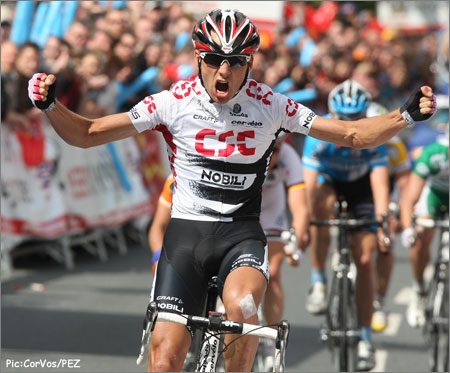 I also like Karsten Kroon on a course like this. He’s normally an Ardennes kind of guy, but he should have a good shot at being in the mix Saturday afternoon, especially when you factor him into the CSC game plan. He made a great move late in the race last year – it didn’t come to anything, but a move like that could lead to victory if the cards fall right…and he has the engine to help the cards land better.

Evans? Nah.
I don’t know anything about Cadel Evans right now. I know that he can win the Tour, almost did, but who knows what his form is like right now. I think he’ll make the elite selection, but he also has that Andy Schleck problem – he can’t sprint, and he’ll likely be duelling against a powerful CSC team, which will make sure that he does not roll away by himself. 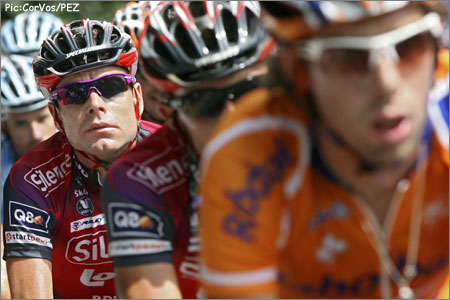 It would take some sparkling form and some errors from some of the other top riders to see Cadel to the win. I don’t mean that disrespectfully to him either. He’s awesome, but he’ll likely be the only Silence rider in the front group, and there’ll more than likely be a better sprinter in the selection. Game over.

HORNER!
I’m not usually too partial to any rider, but I have to admit, I’m a big fan of Chris Horner. He’s a bad, bad man, and he’s had some unfortunate luck this year, and he seems to be doing just fine right now – which means, he’s a good pick for Saturday…maybe not to win, but definitely to play a vital role in the race. 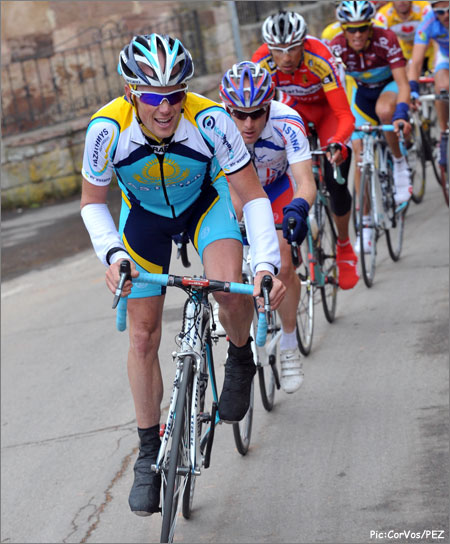 He should have every opportunity to ride for himself. This type of course suits him very well – and he has shown it in the past with a top 10 with no previous European racing during that season (what was that, 04 or something?). 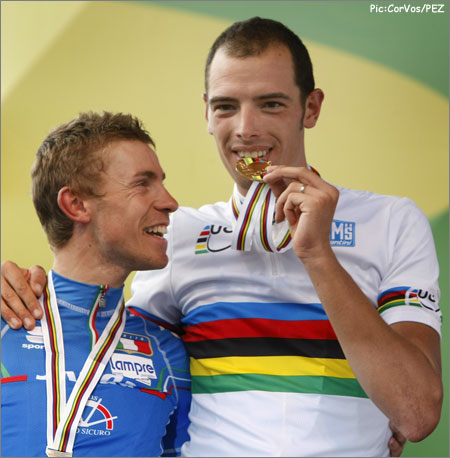 A Little Too Much?
Pippo Pozzato and Alessandro Ballan are going great (obviously in the case of Ballan, and clearly in the case of Pozzato – he has been all over the podium of late) – but this finale might be a wee bit too much for the two strongmen. It’s possible on a great day that they can pull off a magical ride, but my bets are against them. 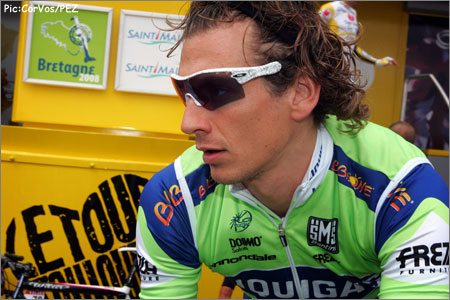 Ballan has already stated that he hopes to help out the Piccolo Principe as much as possible. Maybe that will make Cunego feel a little bit better about missing out on the World Championship win.

And Finally…
Gerolsteiner will not be in attendance due to Kohl’s positive for CERA at the Tour. Normally, this is kind of a whatever type thing, end of the season, nobody really wants to do it…but they’ve got that one guy, what’s his name, oh yes, Davide Rebellin. 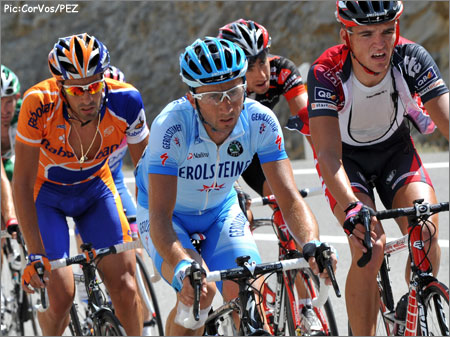 If Rebellin were able to race, I’d put him in that top class of favorites with Cunego, Rodriguez, and Sanchez…but alas, he’ll be watching the race on TV if he watches it at all. For a rider like Rebellin and his advancing years – every missed opportunity is a step closer to retirement. That must be infinitely frustrating. I bet Rebellin won’t be sending Kohl any Christmas cards anytime soon. Thanks, Bernie!

Make sure to keep it PEZ for all your Lombardia needs!

This writer is headed to Como to check out the race this weekend. For more, head to JeredGruber.com. Or if you want to yell at me, I check my Email every once in a while: [email protected]
Like PEZ? Why not subscribe to our weekly newsletter to receive updates and reminders on what's cool in road cycling?