It’s one thing to read race reports about what, who, where, and in which edition of La Primavera, but to speak with a racer, who holds the race close to his heart, a racer who came within fortune’s nod of victory is another thing entirely. PEZ talked with Max Sciandri about Milano-Sanremo.

**See Milan-San Remo live on CYCLING.TV this Saturday at 1:50 GMT

This story first ran in 2006, but we’d be remiss if we didn’t give another look.

“Will we talk about ’93 when you were 3rd to Fondriest or ’96 when you were 4th to Colombo in the Primavera?” I ask Anglo-Italian Max Sciandri, who rode for US squadra Motorola in both races. ‘It will have to be ’93 when I was 3rd I can’t talk about ’96 it still hurts.’

So I open by asking about the long run across the plains of northern Italy to the Turchino Pass where many say that the race really starts at around half-distance of the near 300 kilometres. ‘There are several key points and the Turchino is one of them, Claudio Chiappucci [Italy & Carrera, with Tour and Giro podium finishes and stage wins] took-off on the descent in the rain in 1991 and stayed away to win after he dropped Sorensen on the Poggio. But even before the Turchino a break can go, in 1990 when Bugno won, the race split after 40 kilometres and it was over for half the field. 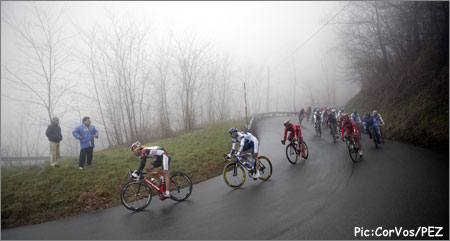 The Turchino traditionally signifies the halfway point, and the time to start racing.

When You Hit The Capi
“Usually though it’s when you get down to the coast and hit the three “capi” [small climbs – but brutal at a stage when most classics would be finishing] Mele, Cervo and Berta that you can tell how your legs are for the Cipressa [penultimate climb before the legendary Poggio]. Once you are over the Cipressa every second is a dangerous moment, the approach to the Poggio is flat-out, a sprint to be in the top 15 or 20. A lot of riders want to be at the front on the Poggio but they don’t have the legs, so you have to be alert because these guys will let gaps open. 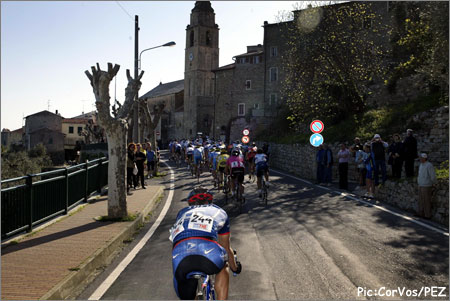 It’s probably not too hard to get dropped most of the way through a 300k race – imagine if you’re racing at warp speed.

That was how it was with Maurizio Fondriest [Italy & Lampre, now a respected frame builder, World Champion in 1988 and a winner in the Fleche and at Zurich] I couldn’t get with him, I was on the wrong wheel and Fondriest was “super” that day.

“The descent is tricky and there is one really bad corner but your concentration is so high that you are not as aware of the danger as you might be. The finish back then was closer to the bottom of the Poggio – I liked it better that way – and Luca Gelfi [Italy & Eldor, a very strong super-domestique with Giro stage wins to his credit] sneaked away to take second.

“I got third in the sprint; I have a photo at home which shows me two metres from the line with the brakes on, one of the race cars stopped right after the line and I actually crashed along with ten other guys. Cipo [Mario Cipolinni, Italy & GB MG the 2002 world champ and Primavera winner the same year] actually threw his bike though the rear window of the car.’

PEZ: So what about ’96, why does it still hurt?
To set the scene – Sciandri bridged-up to a group of three riders: Alexander Gontchenkov [Russia & Roslotto], Michele Coppolillo [Italy & MG-Technogym] and the son of one of Eddy Merckx’s domestiques – Gabriele Colombo [Italy & Gewiss] just before the Poggio, closing a 15 second gap on his own, pictures from the race show Sciandri flying, intensely focussed behind ‘zebra-pattern’ Oakleys. 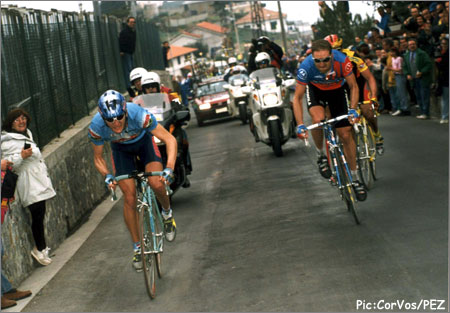 There it is: Colombo makes the decisive move, leaving Sciandri to wonder what if.

Despite his reluctance to discuss the race he did give me insights; ‘On the Poggio I could have attacked and left them I felt really strong, but in my head I was so sure of winning the sprint I didn’t go, I was too sure – winning it was done.’

Colombo several times attacked on the climb but was brought back by Sciandri and Gontchenkov; the four hit the decent together. Coppolillo’s tactics were strange though, refusing to work, allowing gaps to open and riding in a very negative fashion.

At the bottom of the Poggio and into the last 1500 metres Colombo rode off the front, Gontchenkov looked at Sciandri, Coppolillo just shrugged and then it was too late – Colombo was gone. A heart-broken Sciandri didn’t even sprint and finished fourth.

I put it to Sciandri that Colombo never really won much before or since; ‘That’s true but he was a classy rider, he liked to party though – the good life you know?’ It’s a mark of the man that he doesn’t have a wrong word for the rider who won ‘his’ Primavera.

When Max Sciandri said to me of Milan San-Remo; ‘I love that race,’ the words were coming from deeper inside him than his vocal cords.