PEZ’s own Alessandro Federico was our man on the streets of Varese for Sunday’s incredible World Championships Road Race. There was a race to report on, but Ale had gobs of time to take in every bit of what Varese had to offer on a very special Sunday in September for the home team.

Varese is still sleeping when I arrive in the press room. It will be a hard, fantastic day. There’s a lot to do and it’s better to start early. Before setting off to watch the race, I need to check the web connection, read the latest news, and prepare all the folders for the pictures I’ll download later. At the end of the afternoon there will be more than 500 and everything must be edited. I cross my fingers and I move to the box area were the team cars start to roll in with the champions inside. 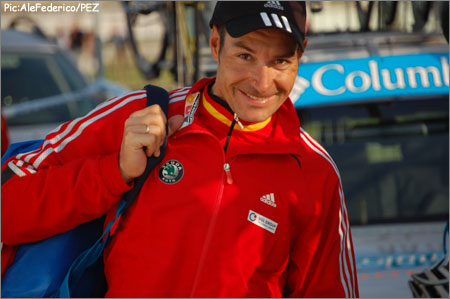 How can it be a bad day when Erik Zabel smiles to you in the early morning? It will be his last race, as it will be for Bettini too. This means that another generation has gone. This means I’m older and older. I’m the same age as Bettini, and this touches me a bit. 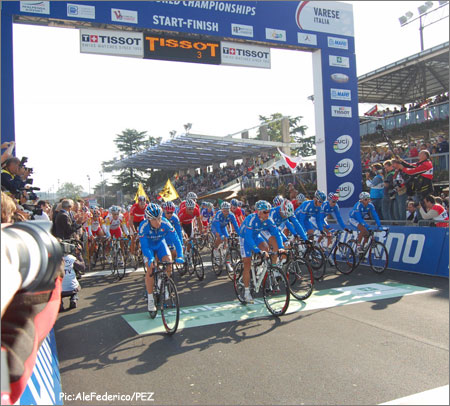 The starting of a World Championship is very interesting. The Team of the last winner gets the whole front row. Then a gun shoots and everything goes crazy. I don’t know how many people were in Varese today, but there were a lot for sure. It’s almost impossible to walk around the circuit. Sometimes the long queue doesn’t flow anymore and someone inevitably panics. The Montello climb is close by, but it is not accessible. Too many people. 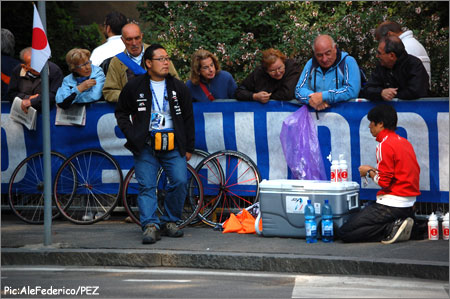 I decide to spend some time near the Japanese box in the feed zone, which is arranged beside the road. Maybe they had no one to tend… After the first lap I decide to walk around a bit, and cross the circuit while avoiding the “hot” part of it. I then have the opportunity to visit the Varese which I don’t know. And, why not? This is a small city in the North, not far from the Swiss border. It is called the “Garden City.” 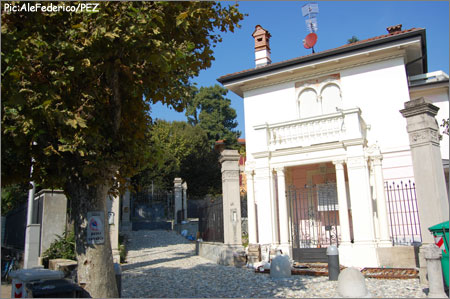 I always thought it was a sort of propaganda for the tourists but when you start to see it for yourself you understand that this city is not designed as a normal one with the downtown, suburbs, and some gardens in between. You always walk in a garden or beside gardens. Most of them are private but a few big ones are public. 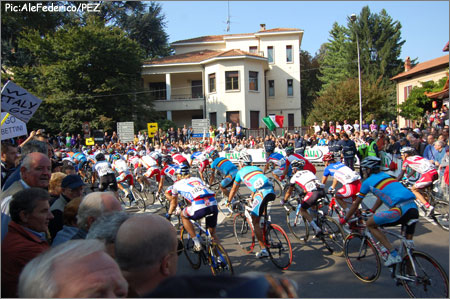 The time flows, the laps too. Everywhere I stop there are hundreds of people from everywhere. Most of the fans seem to be Belgian, Swiss, and Dutch. There are also some German and someone from Luxembourg too, but very few Spanish. Then there are the eastern-supporters: Slovenian, Russian and Ukrainan. Most of them lives here as many immigrated to Italy from the east. They speak Italian and they take advantage of the opportunity to take out their flags and to talk their languages. We, Italians, did the same thing 30 years ago when we emigrated to Northern Europe. 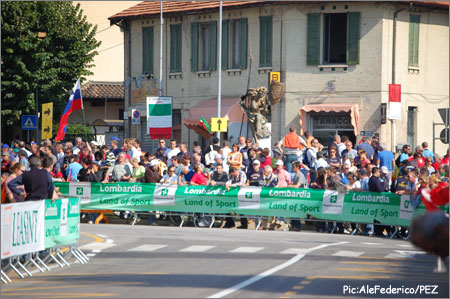 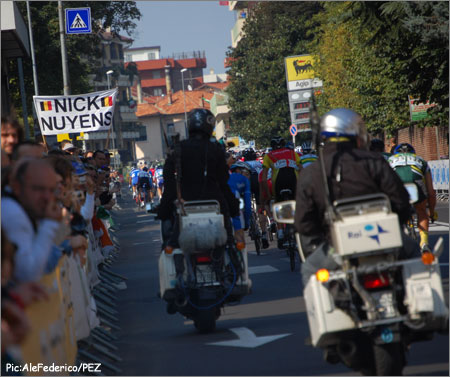 It’s time to eat and there’s just so much to choose from. The World’s are also a business and many merchants have prepared “panini” and “piadine” and much more. I’m more attracted by the cheese, sheep cheese, and I find a good location to eat it while watching the race on TV. 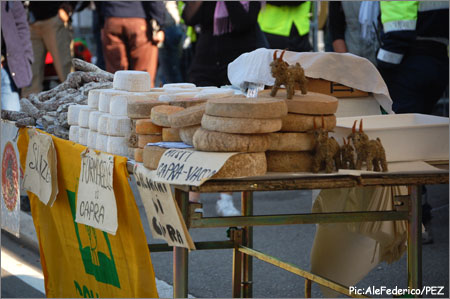 Varese has two different faces today: close to the circuit it is a mess. People are screaming, dancing, listening to music, chatting, talking, singing. Just off the circuit and Varese is a ghost town. The desperate citizens have probably left (no car for them for a week!) and the roads are lonely and beautifully empty. It should be always like that (but then, who would work?)! 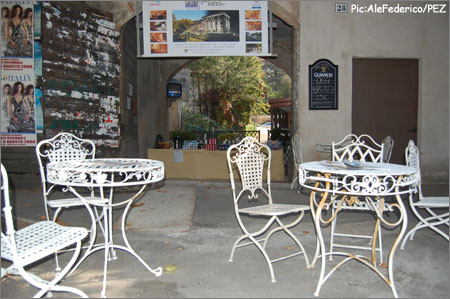 There are many ways to pass the time between laps. After a few laps the people understand that the riders take more or less half an hour. What you do with that half hour is up to you. You can run up and down trying to see two passages in a lap: this is possible because in a few points the circuit touches in two directions. I did it for three laps, but that wore me out. There are someone that read the newspaper for the fourth time over, and then there are the organized ones who pull out a deck of cards and pass the time peacefully. 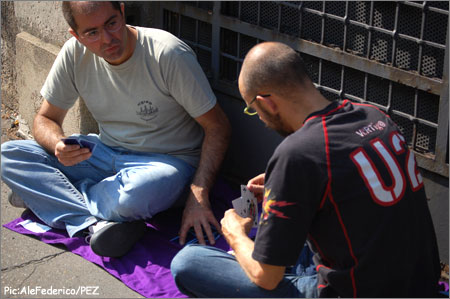 Others comment on the previous passage trying to make a possible prediction for the next one. Most are very angry about the progression of the race when they understand that Spain will not work to close down the break. So, when Italy starts to do so they are very worried that, at the end, it will be a present to the Spain and to all the sprinters, Boonen included, who ride so well in the first positions. 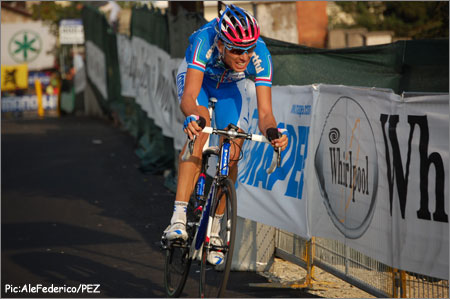 Lap by lap, the race nears its climax and I walk back to the stadium. The race’s announcement bounces from one side of the stadium to the other side of town and I listen to all the updates as they approach one final time. The Italian Team continues to attack and in a few kilometres the bunch is left to twenty riders. I start think that the circuit is not so easy for a sprinter. 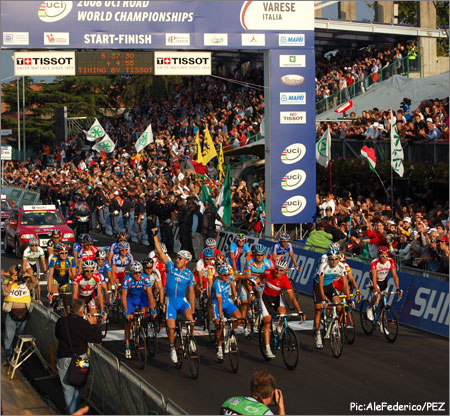 When Ballan attacks, I’m inside the Stadium and I shiver feeling cold, listening to the great cry the people emit from the stands. It’s a long, loud, deep cry. Ballan arrives and the cry stops. Fantastic. I’m already in the boxes area when the riders try to return to their cars. 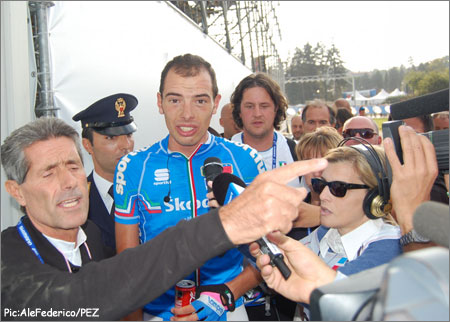 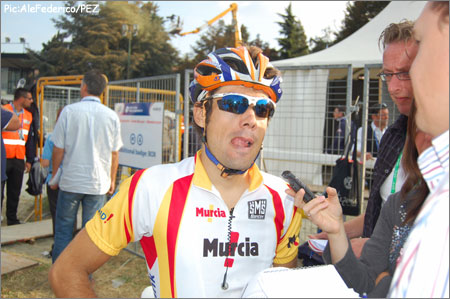 They’re exhausted, but Freire stops for an interview. He wants to speak; he wants everybody to know that Valverde made a big mistake when he didn’t follow the Italians. It’s really the end and everybody slowly moves to their cars, that will very slowly take them at home. Some tired, some happy, some disappointed, all thinking to the next World Championships. 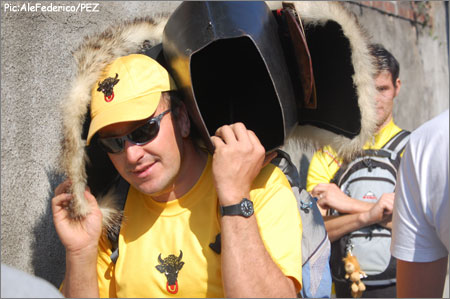