With a combined age of 76 years, Argentina – the oldest team on the track – handed out a golden lesson in Madison racing to the other 15 teams in action on the Olympic velodrome on Tuesday. 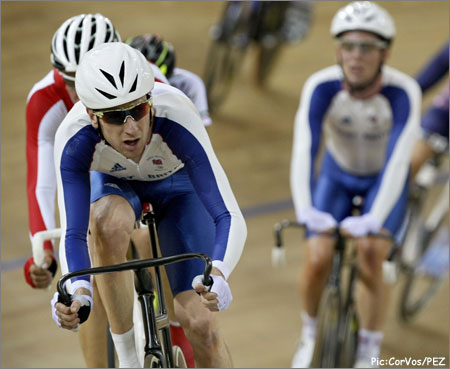 A ‘great’ job of marking the Britons by all squads present negated the powerful duo of Wiggins and Cav.

These three teams were the only three on the ‘zero’ lap with race favourites and current world champions Bradley Wiggins and Mark Cavendish (GB) simply not in the race; apart from one move at 30 laps to go, when they joined the Danes in a do-or-die lap gain bid, only for Wiggins to swing up the track. 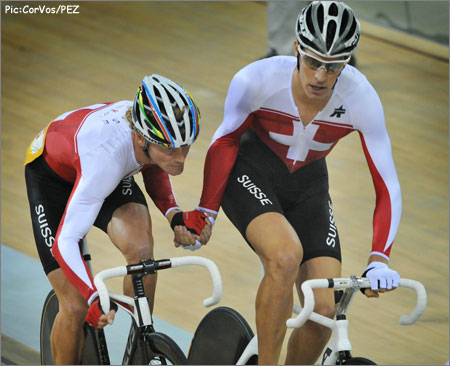 PEZ favorites, the Swiss Duo of Risi and Marvulli, the best Six Day pairing on the planet…just couldn’t do it in Beijing.

Six day kings, Bruno Risi and Franco Marvulli of Switzerland meanwhile, have been working towards this day for three years – all in vain; apart from a few flurries, they were invisible.

When super-fast Alex Rasmussen rocketed to the five points on offer for the first sprint after 20 laps, it looked like it might be a day for the young Danes; he and partner, Michael Morkov had been part of the rapid team pursuit squad which took silver – sixth spot at one lap with 14 points was how they would end the day.

The early lap gain taken by Argentina, then Russia and finally – with around 80 to go – the wily Llaneras, proved decisive to the outcome. 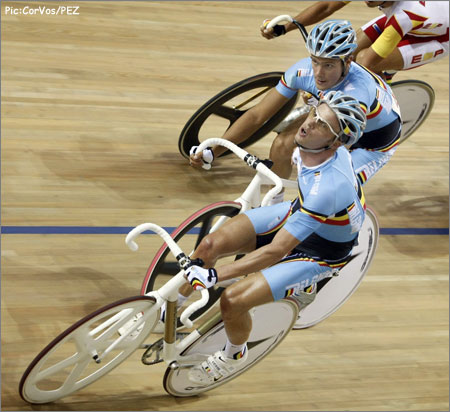 Keisse and Ketele rode very well – amassing a huge sum of 17 points, but could not get that crucial lap…

Not even steady points gathering – 17, the highest of the day – and a huge late, lap gain effort by talented Belgian six day men Kenny de Ketele and Iljo Keisse could unseat the Gaucho duo; the Flemings were fourth.

Fifth on 15 points was the big German pair of Olaf Pollack and Roger Kluge. 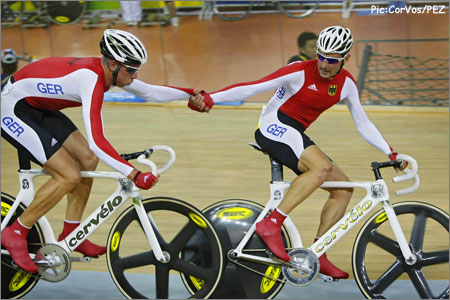 Kluge and Pollack rode well for Germany, but couldn’t find a spot on the podium.

The surprisingly aggressive Canadian duo of Zach Bell and Martin Gilbert had also taken an early lap, but in common with the Italian pairing of Angelo Ciccone and Fabio Masotti – who took the first lap gain of the day – the effort required to steal the 250 precious metres of hardwood meant that when the string moved up a gear, they couldn’t respond.

The crucial move came as early as the third of the ten 20 lap points sprints – the Argentineans had the gap, but rather than close on the peloton, they laid-off making the junction in order to get the points. 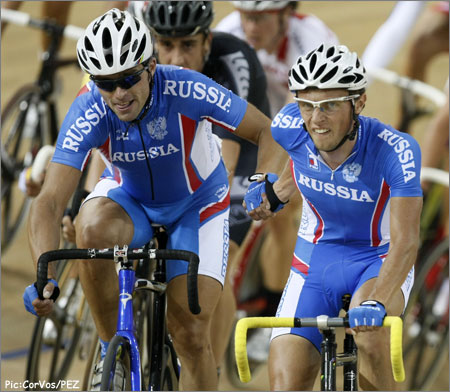 The duo of Markov and Ignatiev came ever so close to Gold, but came a few points short.

Had they joined the tail of the bunch, then the five points would have transferred to the head of the peloton, by holding back they made sure of maximum points; easy to write, but requiring class and confidence to execute – not many pairings could hold off the best ‘chase’ riders in the world, winding up for a sprint.

The Argentineans then spent 140 laps absorbing everything the field could throw at them; but the truth is that the only man who looked like challenging them was another ‘oldie but goodie’ – 39 year-old Juan Llaneras. 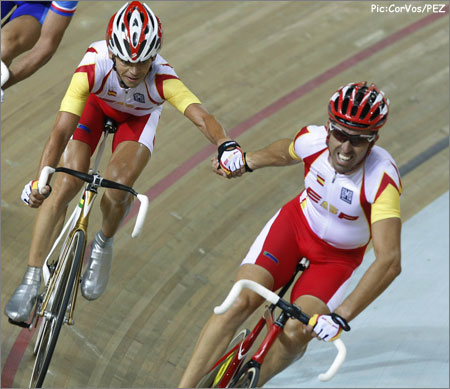 Llaneras and Tauler, just like the Russians, couldn’t quite get the Argentinians – but they did get the better of the Russians in the final sprint for Silver.

Llaneras and Tauler left it until the very last sprint to leap frog the Russians, who until that point were occupying the silver medal position, grabbing two points to take the more precious metal by one point, but still one point short of the top step of the podium.

With his flat back and beautiful pedaling action, Llaneras was the smoothest man on the track, exuding class, whilst his big ‘chrono man’ team mate Tauler didn’t look at all like he was enjoying the race; more upright on his machine and battling it rather than being part of it, as Llaneras appears to be.

This is Llaneras’ last Madison, the weekend’s points championship was his last at that discipline, not a bad way to retire – with Olympic gold and silver. 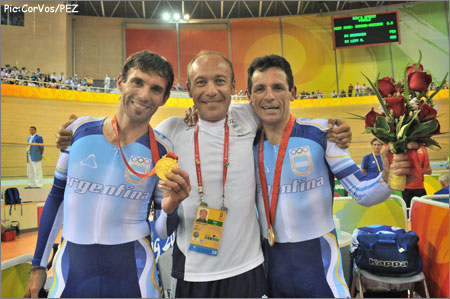 Nobody, and I repeat, nobody, saw that coming from the Argentinians. Brilliant ride from the veterans.

The race was one for the aficionados rather than excitement seekers, a fast pace and heavy marking of Wiggins and Cavendish made it a negative rather than a positive race; sparks that looked like they might provide fire never fully ignited, but that’s not how they’ll see it in Buenos Aires, no doubt. 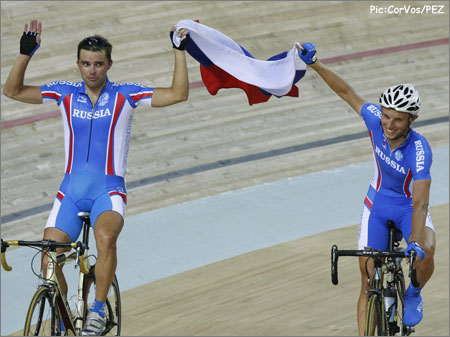 Ignatiev and Markov were not too disappointed with Bronze!