Race Report: Peugeot pro Billy Bilsland always says that a pro race is all about the last hour – ‘but you have to get there’ – however, on a windy, humid Saturday in China under the shadow of the Great Wall, it was all about the last lap, with Spain’s domination of European sport continuing unabated as Samuel Sanchez proved smartest and quickest of the six men who contested a truly epic finale.

The oldest man in the field, 37 year-old Davide Rebellin of Italy made it close to a fairytale ending to the race, grabbing silver from the force of nature that is Fabian Cancellara of Switzerland, with fast finishing Alexandr Kolobnev of Russia taking fourth after going too early; Luxembourg’s Andy Schleck banged his bars as he crossed the line in fifth, whilst there were no such histrionics from ‘back from the dead’ Australian Michael Rogers who took sixth. 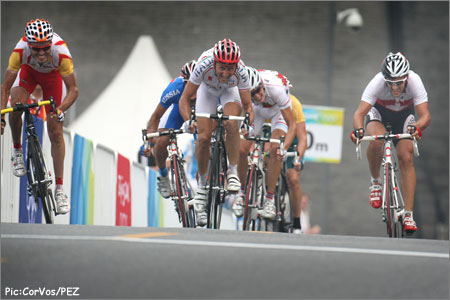 Sammy Sanchez was not to be beaten – getting the better of evergreen Rebellin and super steamrolling locomotive, Fabian Cancellara.

The bulk of the 80 kilometre trek along the wide open concrete acres of a super highway – the purpose of which was to get the riders from the Capital to the circuit – was treated as a promenade by all but two riders; Horacio Gallardo of Bolivia and Patricio Almonacid of Chile who enjoyed not 15 minutes, but two and three hours respectively of fame, before reality kicked-in – but both will probably have streets named after them by now. 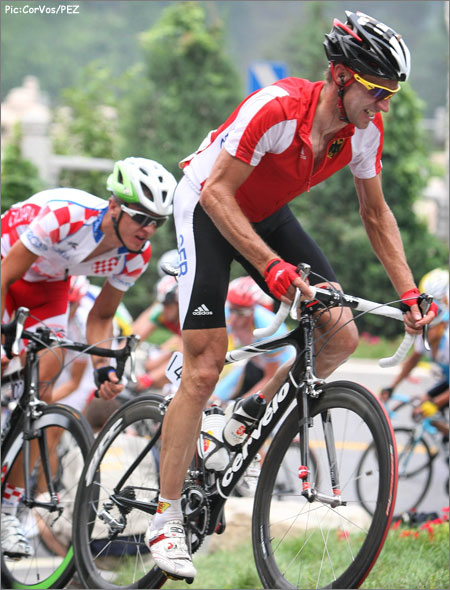 Jens Voigt made some hard early moves, but wasn’t a factor in the end – DNF.

There were a couple of fierce, but brief flurries on ‘the long march’ to the circuit and one of these resulted in 26 riders going clear, including notables such as Jens Voigt (Germany), Carlos Sastre (Spain) and Marzio Bruseghin (Italy).

The 26 rode well together, gathering up the two early escapees whilst the bunch rode steadily, and I had to reach for the energy drink to keep awake as the procession wound it’s way around a tough circuit which had everything – lush mountain greenery; a fast surface; the old China in the shape of the magnificent Great Wall; the new China in the shape of motorway toll booths and even a ‘car wash’ type affair for the riders to cool off below.

Everything except spectators that is – apart from bussed-in flag wavers near the Great Wall and a few knots of European fans near the finish, the circuit was sterile. 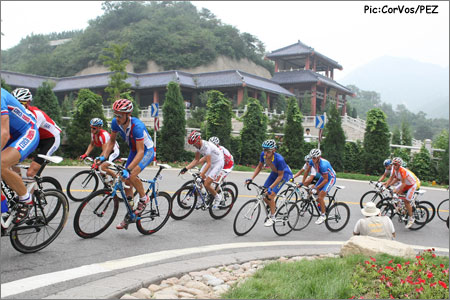 There was a lot of uphillin’ to be done today in Beijing.

Musettes, bottles and food, which on the continent wouldn’t have a chance to hit the tar, lay around the circuit in profusion.

With Germany, Spain and Italy all represented in the break, the onus was on the other strong teams to chase, and it was down to the USA and Russia to forget about old differences and get to work as the Italians and Spanish, in particular had a chat and tried to spot a fan.

With five laps to go and the wind lashing the bushes, Podgorny (Ukraine) and Kuschynski (Belarus) took off from the big lead group, and with three to go their erstwhile chums in the break were absorbed. 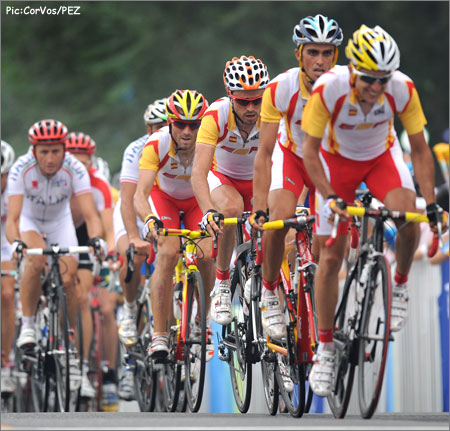 Spain’s All-Star team was impressive today – and the win was their just compensation.

Despite Van Summeren (Belgium), Lokvist (Sweden) and Uran (Colombia) joining the two East Europeans briefly, the Spaniards had taken the camouflage nets off the big guns.

Sastre, Contador, Sanchez and Valverde, line astern and the race was on for real – what had been a big bunch suddenly got a lot smaller. 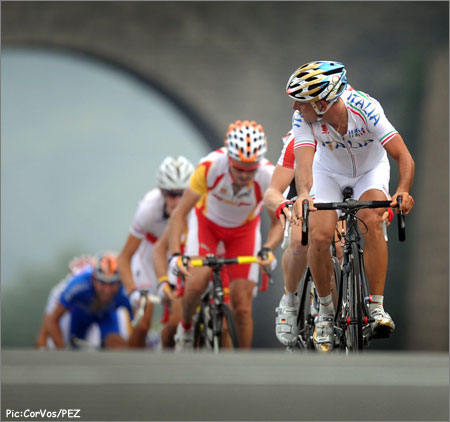 Defending Champion Paolo Bettini was strong, but it was Rebellin who made the winning selection for the Italians.

A succession of famous names began to appear, Vandevelde, Leipheimer, Pellizotti, Andy Schleck, Rebellin, Bettini – but the man to get the gap was Christian Pfannberger (Austria) who had a great early 2008 for Barloworld but a mid-season blighted by crashes.

Long hair streaming in the breeze, low, flat and aero, the chain well to the right, he looked good. 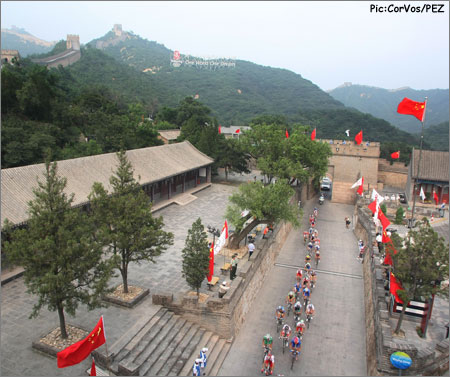 Meanwhile, back in the bunch, ‘Bruz’ (Marzio Bruseghin) was really earning that free ticket to China, as he worked like one of the donkeys that he and his fans are obsessed with.

The Austrian came back just after he heard the bell and as the immaculate tarmac began to rise. 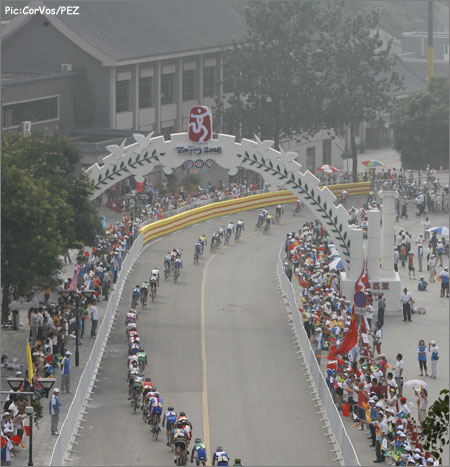 It was young Schleck who inspired the vital move of the 2008 Olympic road race, those red claws on the Luxembourg Lion which covered the back of his jersey, were sharp and there could be no question about his courage.

But on his wheel was a smaller and wilier beast – the old fox that is Davide Rebellin.

Kolobnev came too, not a man to take to a sprint – one look at his calves tells you that. 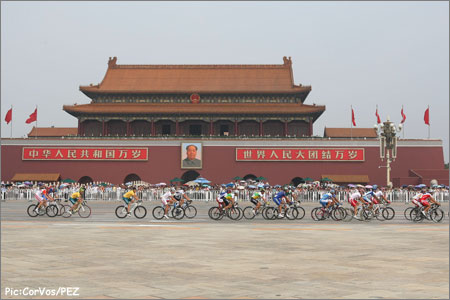 The last member of the quintet which was bound for glory was that most complete of riders – he can climb with all but the very best; he’s one of the best descenders in the world; he can roll the big ones on the flat and he’s quick at the death if it’s been a tough day, Sanchez.

Schleck piled more pain on and only Rebellin and Sanchez could respond; off the climb it looked like neat, three men for three medals.

Kolobnev swerved and gasped behind, trying desperately to suck some oxygen from the hot, heavy air. 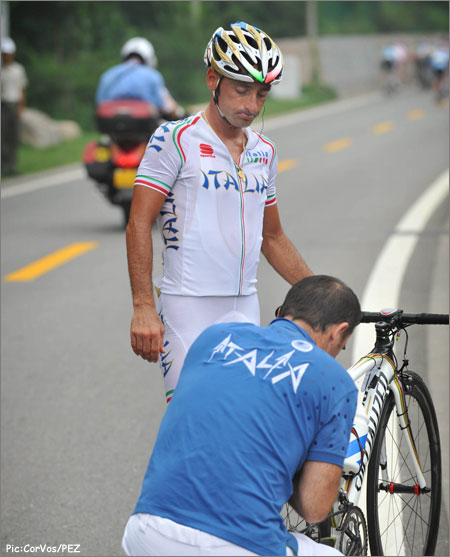 Paolo Bettini’s finale was derailed by some unfortunate luck.

But Rogers and Kolobnev weren’t beaten, they joined forces and chased and chased; as up front, Schleck pointed back with his thumb as if to say; “we don’t want that damn Russian up here!”

Unlike many others machines, with their taped up logos (only one down tube decal each side is allowed in the Olympics) Schleck’s pristine white Cervelo with it’s regulation decals and Olympic rings was inspiring it’s owner to ever greater efforts; Rebellin and Sanchez weren’t about to point out his mistake to him as he tried to keep the Aussie and Spaniard at bay.

Despite the fresh faced CSC man’s efforts, the two chasers were coming back – and then suddenly, there was a sixth rider. 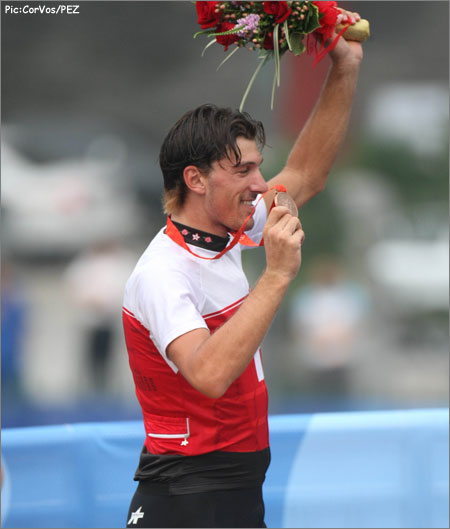 Fabian Cancellara has to be one of the most entertaining racers in the game right now – where did he come from in the finale? Incredible.

From nowhere came the railway engine that is Fabian Cancellara, he caught the two, hardly paused to draw breath, accelerated again and at the kilometre sign they six were together.

Into the tough, uphill finish straight it was cagey; would Cancellara go for one of his famous ‘long ones?’ 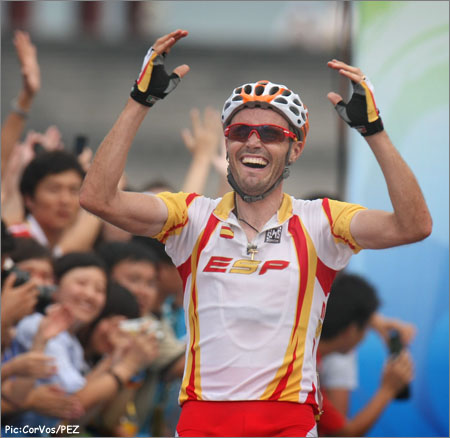 But even a monster has his limits and it was Kolobnev going first, Rebellin wanted it and Cancellara is just so damn strong. 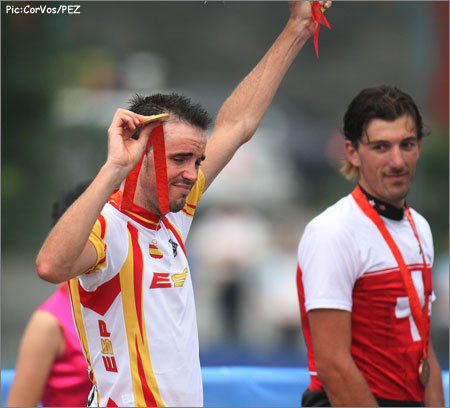 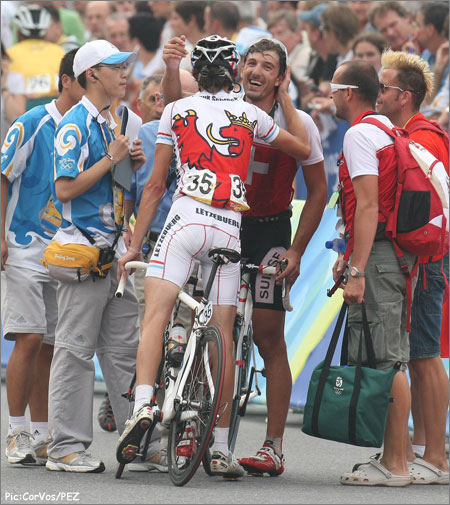 The CSC boys were happy post-race – Cancellara and A Schleck share a joyous embrace.

But it was the willowy Sanchez who had all the answers for Spain – The Giro, le Tour and now, The Olympic road race.

The Worlds and Vuelta? That’ll be Valverde and Contador, then!