Skinsuit open to the rib cage; one arm, then two held high as he crossed the line; salt and saliva crusted around his mouth; it was a relieved as well as jubilant Fabian Cancellara of Switzerland who did what we all expected in Wednesday’s 47 kilometre Olympic individual time trial – and after a thrilling race, lifted Beijing gold to go with his road race bronze.

Meanwhile, the man who was the big surprise of the day – Sweden’s Gustav Larsson – raised his eyebrows and shrugged as he watched his long haired, Swiss CSC team mate blast across the line; “what else could I have done?” he seemed to be saying. 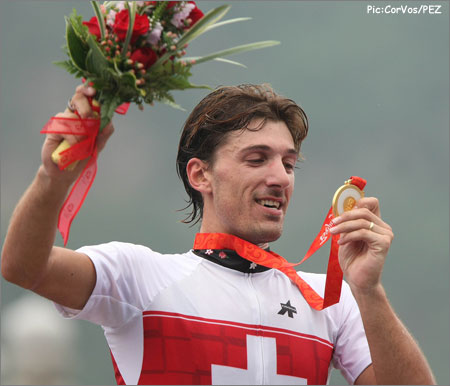 Levi Leipheimer took bronze for the USA, showing no joy, just frustration, as he forced his Trek across the line, edging early leader Contador into fourth.

Proving the; “watching time trials is like watching paint dry” brigade wrong, was 2007 Tour and 2008 Giro winner, fourth placed Alberto Contador – the wiry Spaniard was an incredible 29 seconds up on the winner after just 10.8 kilometres, having caught 2007 Stuttgart chrono medallist, Stef Clement of the Netherlands for 90 seconds.

Cadel Evans found the time trial form which deserted him in the final time test of the Tour, to take fifth, just 13 seconds from bronze.

The 39 competitors went off in three waves of 13 – to avoid confusion and bunching on the two laps of the 23.5 kilometre road race circuit – and it took Olympic road race champion, Samuel Sanchez, off first from the final wave before early leader, Svein Tuft of Canada could be prized out of the leader’s chair in the holding pen, where the current medal placed riders waited patiently.

A final seventh in this company was good reward for the Canadian strong man. 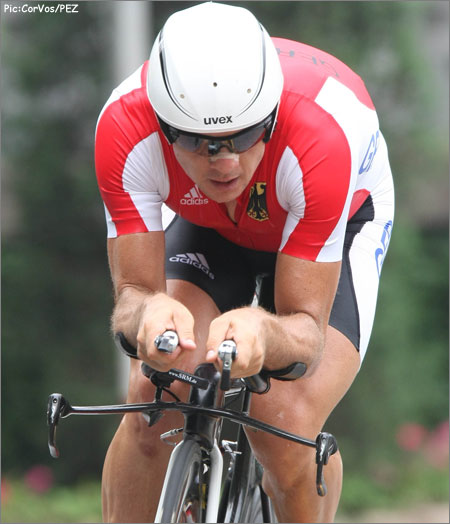 Bert Grabsch was a bit overmatched by his opponent today: a super tough, mountainous time trial.

No one from the second wave, including notable chrono men David Zabriskie (USA) and an over geared Bert Grabsch (Germany) could dislodge the top three – Tuft, Holland’s Paris-Nice hero Robert Gesink and Britain’s Steve Cummings.

Zabriskie had looked a model of aerodynamic style and high cadence efficiency, but that didn’t impress the electronic timing. 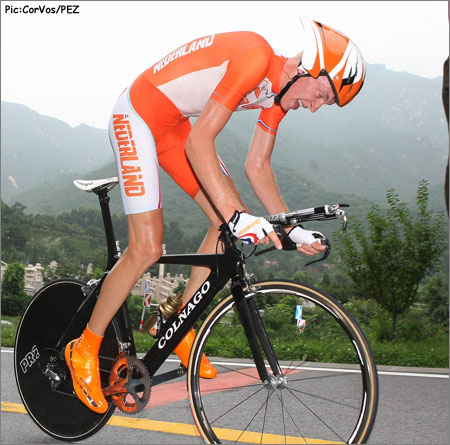 Robert Gesink was once again strong today – his quiet, efficient rise to the top continues.

Cummings time for lap one was only bested by the top five and hints at better things to come against the watch for the former team pursuit champion of the world.

With wave two providing no excitement, it was all down to the ‘capo’ in wave three: 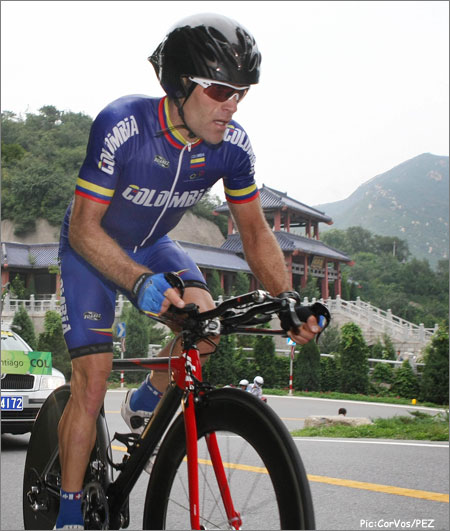 Former TT World Champ Botero had another good go of it today, but couldn’t quite pull off the magic of the road race.

Sanchez, looking skinny and fit, crowned Olympic champion on Saturday and with an easily overlooked Vuelta TT win to his credit in 2007- a final sixth place would endorse his credentials as a man who can do it all.

Santiago Botero ‘back from the dead,’ thanks to his new boss Michael Ball’s Rock and Republic squad and with big results in his native Columbia, not to mention a fine seventh in Saturday’s road race – but today he was forced, sluggish and outside the top ten. 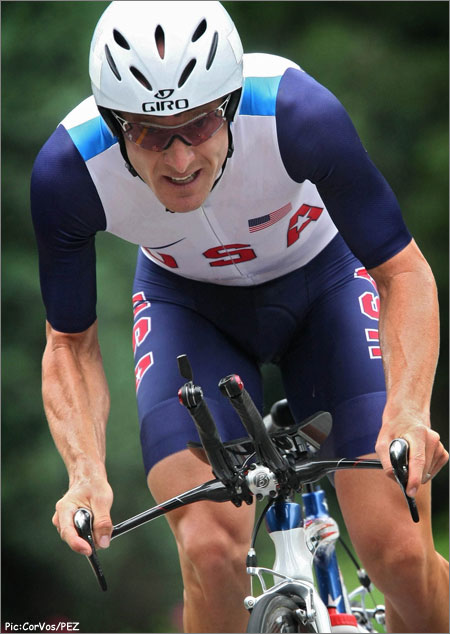 Levi was super today – Bronze Medal at the Olympics: you can hang your hat on that.

Marzio Bruseghin, winner of tough hilly time trials in the last two Giros – his home Tour – where he finished on the podium this year.

But perhaps he used up too much of that mule-like strength working for his squadra in Saturday’s road race; he wasn’t at the races today, on a course, which if it was located in Italy in May, would have suited him down to the ground. 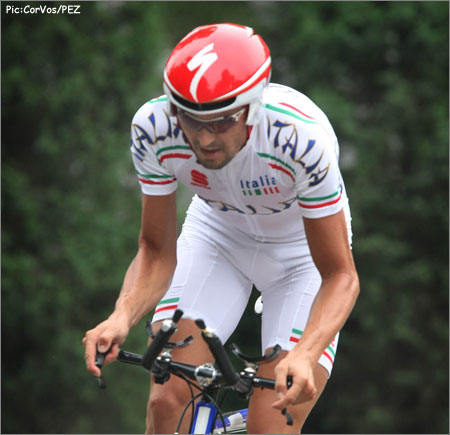 Big Bruss just wasn’t the same time triallist as he was two months ago at the Giro.

Three times world time trial champion, Michael Rogers of Australia was given hope by a strong sixth place finish in Saturday’s road race – but he slipped back two places from there today.

Big Vlad Karpets of Russia was looking hairier than ever, but so was his time trial form. 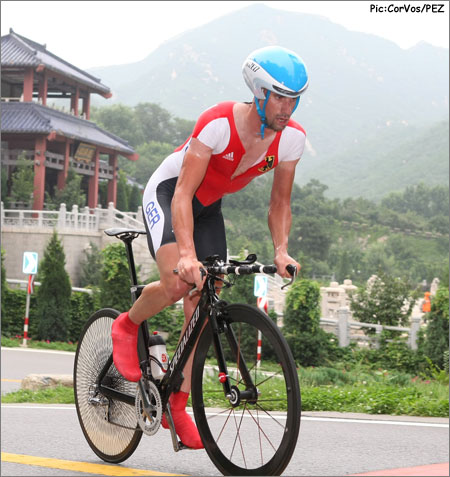 The same can be said for Germany’s Stefan Schumacher. After winning BOTH Tour de France TTs, Schumi was but a shade of his July self.

The race was between the top four, Evans was his usual consistent self, always there, but never seeing the top of the leader board, whilst the Cancellara, Larsson and Contador all topped the board, with a determined Leipheimer stirring the mix.

Contador’s rocket launched time at the first check wasn’t the only surprise at the 10.8 K mark; Larsson was also up on the Swiss double world champion. 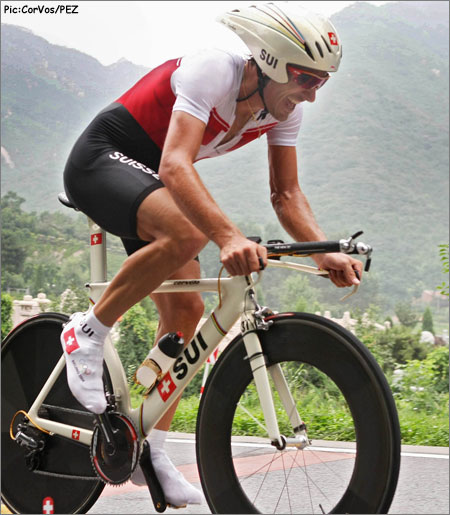 At 23.5 K it was the Swiss at the head of affairs and whilst Trek had gone down the ‘Technicolor’ route for Levi and ‘Bert’s’ low profiles, Fabian’s white Cervelo carried a bold ‘SUI’ logo and a Swiss flag device on the down tube with a small ‘Cervelo’ on the top tube – classy and understated. 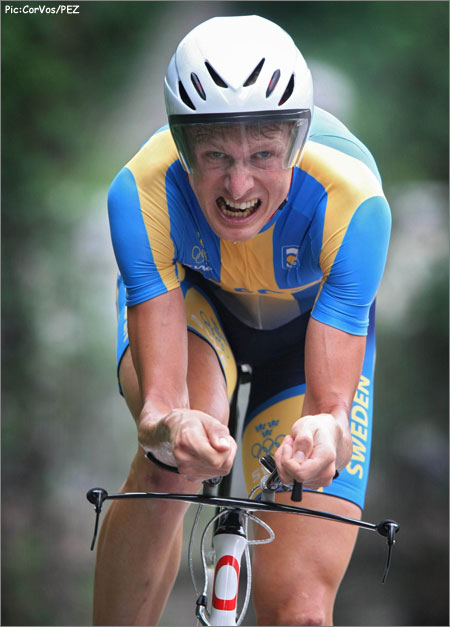 At 34.6 kilometres, atop the mountain for the second time, Larsson was the man topping the leader board – mounted on one of those neat white Cervelos with the Olympic rings he looked to be labouring up the climb.

But the low revs meant a huge gear, much higher than the spinning Cancellara and he was six seconds to the good; with Contador now third, but on the slide.

Off the mountain and Leipheimer was burying his face in his forearms and peeking over the top of his tri-bars as he tried to urge every particle of speed from that Trek. 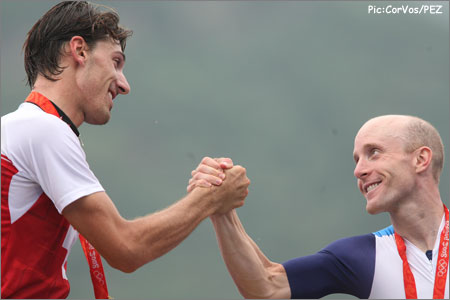 Contador meanwhile, had Clement – who he had caught some 25 kilometres before – for company again and the Orangeman would stay there until the finish.

Cancellara was at his finest on the descent, in the tuck, powering a mega gear at huge speed, teeth bared and slicing round tight bends with the grace of a swooping hawk.

If there were any doubts about the fact he was going to win, then the up-change as he hit the uphill drag to the line dispelled them. 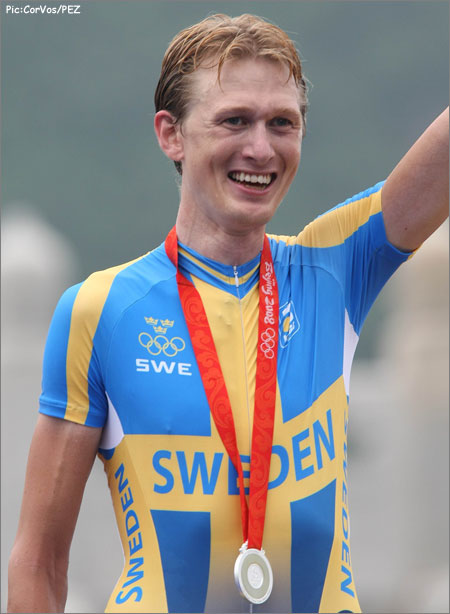 For Larsson, the dream was over, but seeing the big Swiss slumped against the barriers, exhausted, with water being poured over him told an eloquent tale of how hard the handsome specialist had tried over that last half lap – but that’s what it takes to be an Olympic champion.