Paris-Nice’08: In The Books

Luis Leon Sanchez (Caisse D’Epargne) took a well deserved, opportunistic win in Sunday’s final stage of Paris-Nice; the ‘Race to the Sun’ finally lived up to billing as the depleted peloton sprinted along a sun-drenched Nice seafront in vain pursuit of the tall Spaniard.

As our ‘Italian in the heart of the peloton,’ Dario Cioni (Silence-Lotto) predicted earlier in the week, despite young Rabobank Dutchman Gesink’s precocious talent, it would have been wrong to rule out a rider of ‘Tin Tin’ Rebellin’s guile and experience – it was 1992 when he grabbed ninth at the Tour of Lombardy in his first pro season. 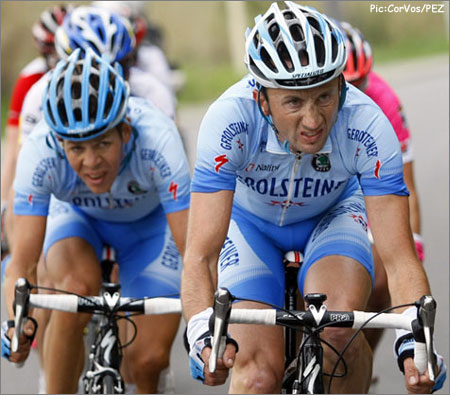 So it proved, if the Italian – who seems to have been in the autumn of his career for years now – couldn’t match the lanky Rabobank talent going up the cols, then he certainly could going down them.

An unsettled and isolated Gesink could only look on as Rebellin plunged away from him on the tricky descent of the Tanneron on Saturday. 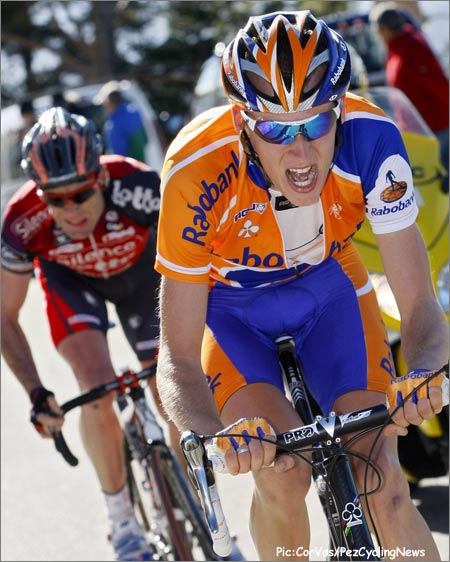 Also as predicted by Dario, his Silence-Lotto team mate, Yaroslav Popovych was in place to benefit from the chess game, at the Nice finish line the Ukrainian took third podium spot behind Rebellin and Rinaldo Nocentini (Italy & Ag2R).

But Gesink has plenty more podiums ahead of him if his rate of progress continues to follow its present curve; and don’t forget that a certain ‘Bert’ Contador snatched the win from Rebellin’s grasp at the eleventh hour last year.

So, what does Paris – Nice tell us about who’s in the frame for immortality in the streets of San Remo next Saturday?

Firstly, if a rider has chosen to ride Paris – Nice, then statistically they have chosen a less definite path to walk to victory; no one this decade has ridden Paris – Nice in anticipation of their Primavera win.

The ‘Race of the Two Seas’ is traditionally faster and ‘twitchier’ than Paris – Nice, with its big climbs and bad weather.

Additionally, the timing of the Italian race is better, finishing on the Tuesday rather than the Sunday when the French race concludes. 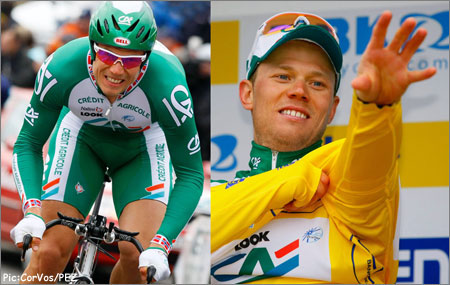 But odds are there to be overcome and one need look no further than the prologue winner for the first man who should be among the heads as the field tumble down the fairground ride of the Poggio.

Thor Hushovd (CA) showed that whilst aero positions, training on your TT bike and mentally rehearsing the course ten times are all crucial for success against the watch, there’s no substitute for sheer wattage.

But we knew that Hushovd could ride a brilliant prologue; we saw that in Strasbourg at the 2006 Tour.

What’s far more relevant this year is the way the big Norwegian has been climbing on the road to the Mediterranean.

The Poggio will hold much less fear for him and it will be a surprise if he isn’t in the mix in San Remo.

The first two road stages were won by a burly, strong Belgian from QuickStep – no, not Big Tom, but Big Gert. 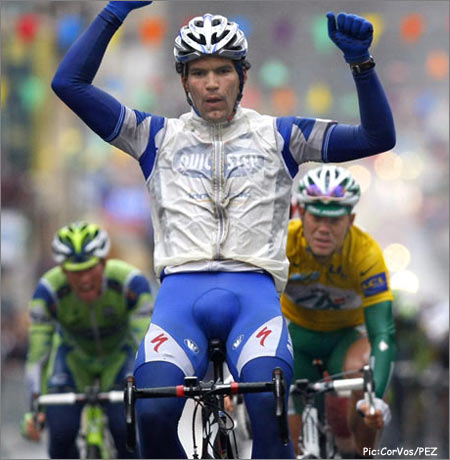 Again, drawing on Signor Cioni’s wisdom, the stage finish where Steegmans grabbed his second win, was no drag strip – a sprinter’s success depends as much as what is going on inside his head as how his muscles are performing – the big Belgian may be the QuickStep choice for Saturday, particularly given that Boonen hit the deck in Tirreno and may not be at the level it takes to out-drag Ale and Oscar.

The third stage was won by Kjell Carlstrom (Liquigas) – there are no ‘easy’ wins in pro racing anymore, but the Finn won’t be among the heaving shoulders on Saturday.

But the winner of stage four is one of the few riders who might just be able to give the pure sprinters the slip, a la Pozzato in 2006 – for ‘Pippo’ of course it’s still possible and there’s nothing that Italy likes more than an ‘azzuro’ with big hair winning – but we’re talking here about another Silence-Lotto man, Aussie Cadel Evans, with two big wins this year already and perhaps a late realisation of what he’s actually capable of. 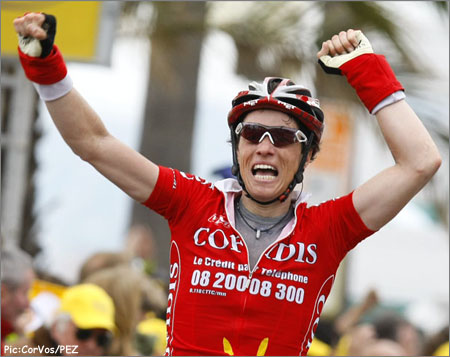 It’s hard to escape the baying pack which swarms off the foot of the Poggio, especially now that the finish is one kilometre further away, but one more man who might be able to do it has already won big in ‘07 at Het Volk and the GP Samyn – Philippe Gilbert (F des J).

The last time that a ‘real’ Belgian won was Fons De Wolf in 1981 – yes we know that the record books state that Andrei Tchmil won for Belgium in 1999, but I don’t know many ‘Belgians’ who have Russian as their mother tongue!

Gilbert seemed to be ‘cruising’ in Paris-Nice, perhaps not wanting to show his hand – he knows that he can’t win in the finish straight melee, so it will have happen on the Poggio – or before.

He tried it last year with ‘The Cobra,’ Saunier’s Riccardo Ricco but couldn’t match the precocious Italian’s work rate.

If Gilbert can again find the form he had riding in to Ghent to win Het Volk, then he has to be a favourite.

We’ll talk about Ricco in a day or two after Tirreno – where he’s displaying his wares – has finished.

Spain’s Barredo was another QuickStep stage winner in Paris-Nice, but on Saturday he’ll be shackled to a wooden bench with a big oar in his hands, rowing the QuickStep galleon whilst Tom and Gert hide in the rigging.

Sylvain Chavanel (Cofidis) showed great strength of character in coming back from losing the yellow jersey to take a stage, but somehow he doesn’t shout; ‘I can win in San Remo!’ at me. 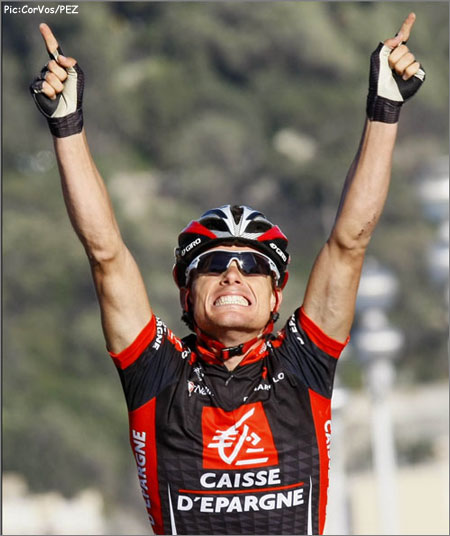 Last stage winner Sanchez is big and strong, but like Barry Hoban always says; ‘a lot of guys can race 200 kilometres, but when you go past that, then you sort the men from the boys.’

The Primavera goes nearly 100 kilometres over that mark, Sanchez is good but again he’s not shouting.

And finally, ‘Tin Tin,’ – there was a day, but it’s not next Saturday!

We’ll divulge who we think will win, when we ‘wrap’ Tirreno, this week, keep Pezzing – clues?