ParisTours’08: A Sprint Or A Break?

A straight line of almost three kilometres with not an obstacle in sight: the Avenue de Grammont in Tours can lay claim to one of the most prestigious finishing straights in all of cycling, rivalled perhaps only by the Via Roma in San Remo and the Champs-Йlysйes in Paris. The big question (as always, the song remains the same) – can a break disturb the great swirling mass of sprinters?

Paris-Tours (Sunday, October 12) is the final big race of the year for the sprinters, and the final race for one of the best sprinters around: Erik Zabel. Zabel has a lovely tally of three wins in the so called sprinters’ classic, and yet, the sprinters aren’t anywhere near assured of glory on the Avenue de Grammont. 8 of the last 11 Paris-Tours’ have been decided outside of a bunch sprint.

Let’s take a pictorial run down the last four years of finishes: 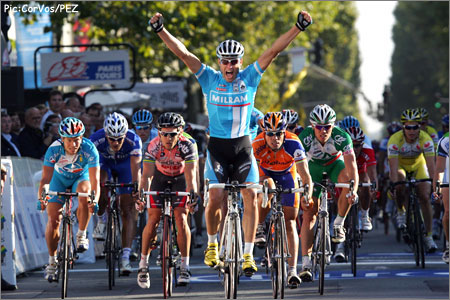 Petacchi added Paris-Tours to his lengthy palmares last year, but there’ll be no repeat in 2008. 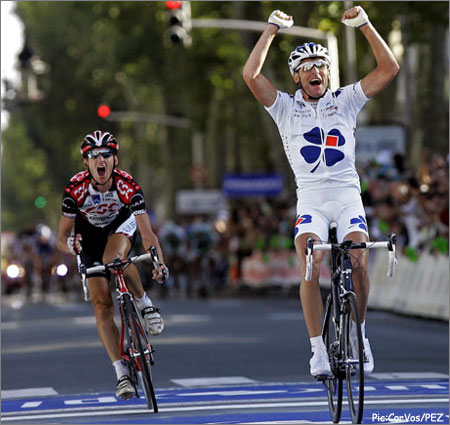 Guesdon beat Arvesen out of the break in 2006. 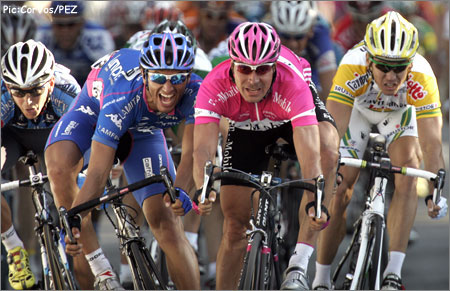 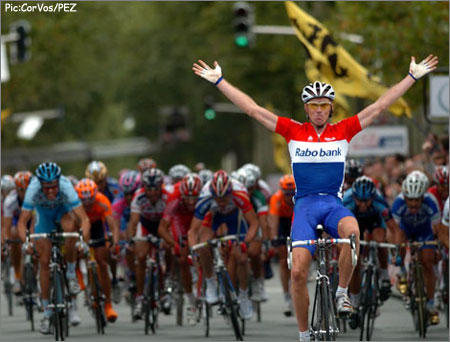 …And that gorgeous picture of Dekker taking the win after 225km out front in 2004.

That is a bit misleading though, as these break victors seldom make it to the line with more than a gasp of a gap between their glory and the gaping, ravenous maw of the field. I’m sure the pattern has made itself apparent already, but for lack of a more creative prediction, it seems even numbered years are break years. So there you have it, a break will go the distance in 2008. You can’t argue with patterns. Sort of. 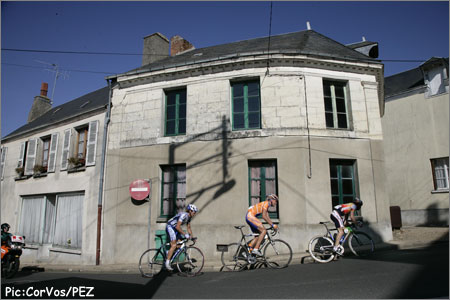 There will certainly be an early break…but that probably won’t be the successful one.

Let’s Look At The Course
It’s pretty simple really: Paris to Tours via open country roads. Paris-Tours, like other ‘Paris’ races, does not start in Paris proper, but in a suburb, St-Arnoult-en-Yvelines. The race then proceeds in a generally southwesterly direction, passing close to the cities of Chartres, Orleans, and Blois. 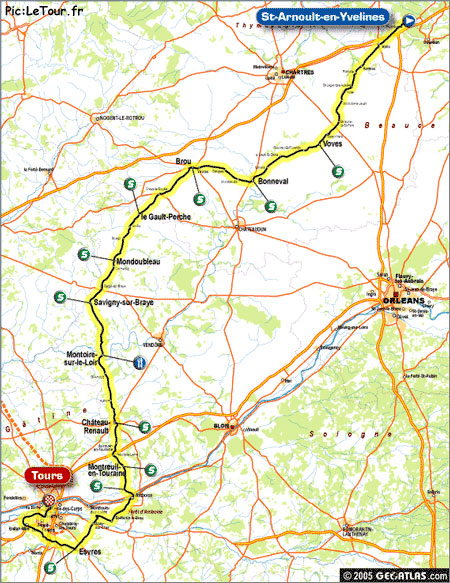 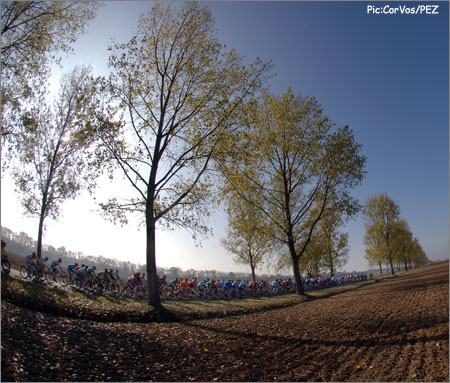 It’s a largely flat run to Tours, but it sure is pretty.

The profile is seemingly self-explanatory – flat, but inside the last 40k the roads become hillier with a number of stinging hills that could seal the deal on a suffering rider’s day after 210 km already in the saddle, or conversely, could provide the opportunity for a rider to make the winning move. 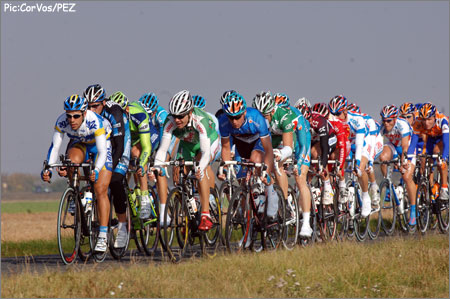 Coming so late in the year, the weather also can play a big factor in the race, with crosswinds and rain often playing vital roles in forming the race outcome. 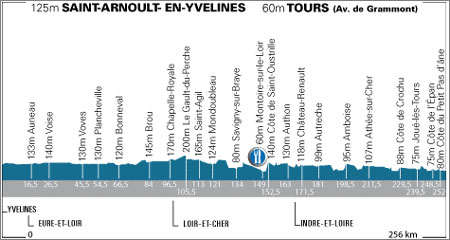 How Is This Possible?
In the last ten years, only thrice has Paris-Tours seen a full-on gruppo compatto bunch gallop on the Avenue de Grammont. In typical hard man sprint fashion, Erik Zabel’s name makes up for 66.6% of that tally with new LPR super sprinter, Alessandro Petacchi taking the glory in ’07. 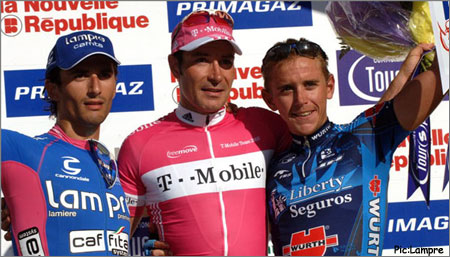 The 2005 podium is a very possible outcome: Zabel, Bennati, Davis.

The other eight years? Breakaways. Or at least I think so, Tchmil or Tafi could possibly have won a bunch sprint, but I don’t think so…correct me if I’m wrong. Either way – the devil is in the details, and this purportedly Sprinters’ Classic has proved to be anything but. There are by far more bunch sprints at the Vattenfall Cyclassics and Milano-Sanremo. But what does it all MEAN? I’d say that picking a winner is next to impossible. 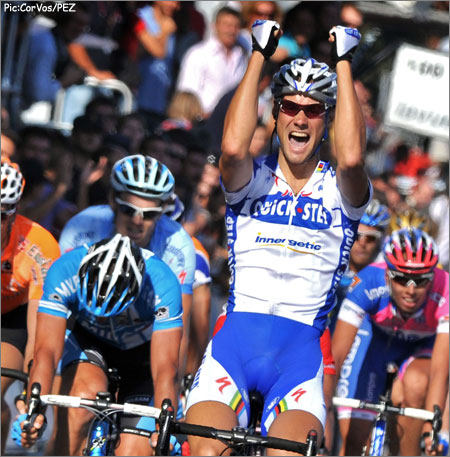 Back To The Speculation
Boonen is flying right now. There’s a reason he was pissed about how the Worlds finished up just a few short weeks ago: he is fast, strong, and keen for big wins (then again, who isn’t). The scariest thing about Boonen – he doesn’t have to win the race in a sprint. He can do it out of a late break any day. He probably won’t of course, since he has a team of ‘slaves’ to make sure he arrives to the line only needing to sprint. 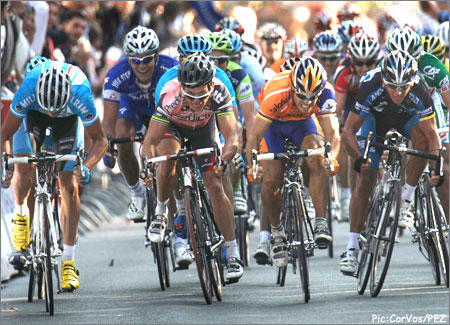 McEwen and Freire were eliminated from last year’s sprint when McEwen pulled out of his pedal and ran into Freire.

We’ll never know, but methinks that Boonen and Freire were probably the two most frustrated people in that race – the course WASN’T too hard (contrary to popular belief) for them and they were in with a real shot.

With that in mind, my three sprinting aces for Sunday are of course: Boonen, Freire, and three-time winner Zabel. 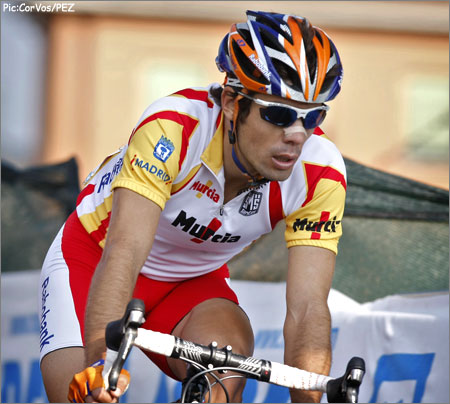 Boonen wasn’t the only frustrated speedster in Varese.

There are sprinters a’plenty to deal with if the pattern is broken however. Robbie McEwen took the Vattenfall Cyclassics in August and got back to his traditional sprinting self. He has never quite broken through in the Classic sprints though, Milano-Sanremo, Paris-Tours, and the Zolder Worlds all stand out in their non-presence on his resume. I want to see him win one of those (well, of course Zolder is not possible) before he’s done, but you know what they say about wanting…you can want in one hand and sh*t in the other and see which one fills up first. 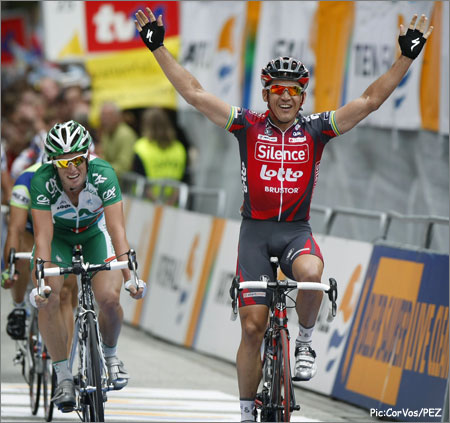 McEwen is always one to be watched, but that guy right behind: Mark Renshaw is also a big time threat.

Daniele Bennati is also on the cusp of that big time elusive win in a Classic. He was great at the Vuelta, and I think he’ll be a definite sprinter to keep an eye on come Sunday. 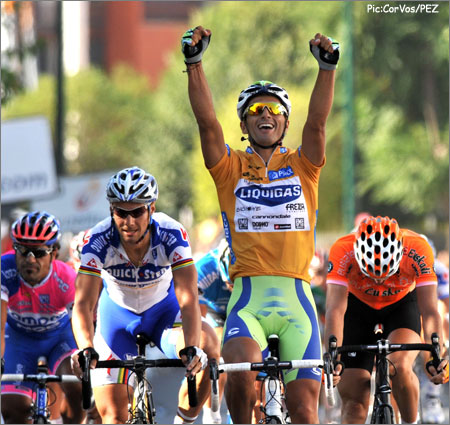 The boys over at CSC aren’t too shabby in a sprint either: Matti Breschel and Juan Jose Haedo are a speedy duo, and Breschel is really coming into his own as a real possibility in the sprints. He’s also the kind of sprinter that will make it to the end of a hard race. 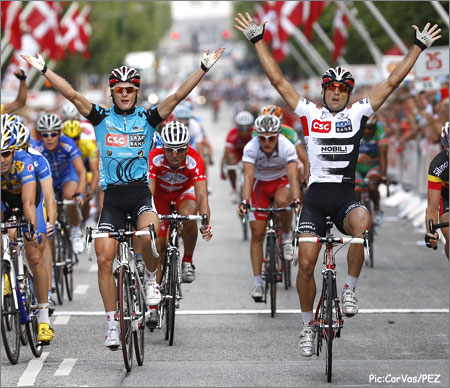 The Burden Of The Sprint
Only a few teams have what they might consider decent bets in a sprint: Milram (Zabel), Silence (McEwen), QuickStep (Boonen), Liquigas (Bennati), and Rabobank (Freire). I don’t foresee too many other team sacrificing their entire teams for the sake of a sprint. 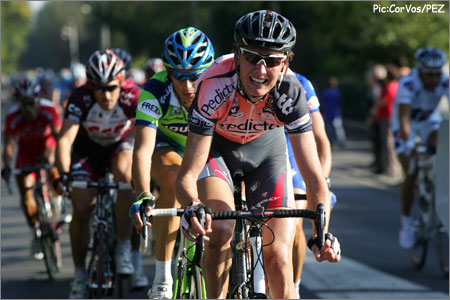 Robbie Mac’s boys at Silence are well schooled in the art of bringing him to the line.

That’s not too different from normal – those are arguably the five best teams for sprints, except this is a hard race over 250km of most likely windy, open French countryside. 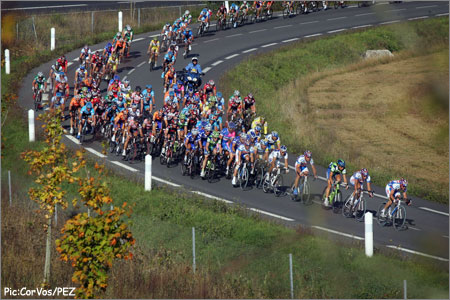 This isn’t a typical Tour de France stage where a sprint is a foregone conclusion. It’s hard to get much of a consistent organization on the front of a field when the peloton has been whittled down to less than 50. You can’t do too terribly much when half of your team has been dropped or called it a day. 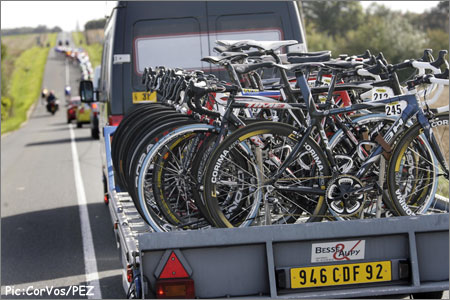 And If A Sprint Is Spoiled…
There are tons of reasons for this race never to see the light of a bunch sprint. I’ll give you a few pictures: 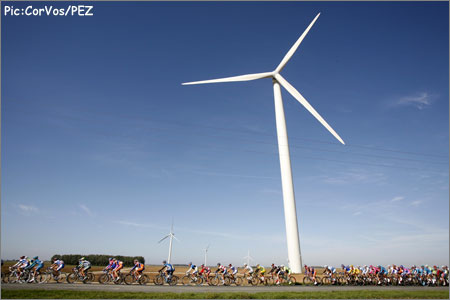 They have those giant windmill things along the route for a reason. 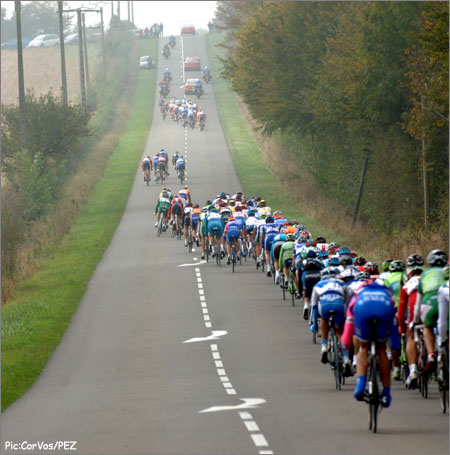 It’s sometimes hard to believe how hard a race can be without HC mountains or cobbles. 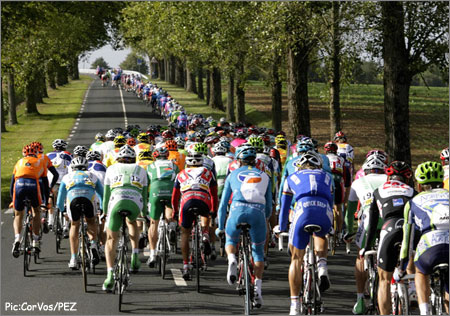 There aren’t many races where the word breakaway is thrown around near as much. I’m probably too blame for that, but I can’t help it that the possibility of a break duping the sprinters gets my blood churning. Last year’s magnificent charge for the line was still nearly upset by an all-star grouping of Pippo, Gilbert, and Kroon. 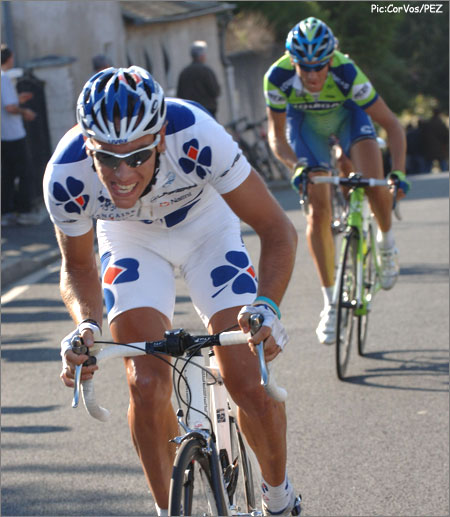 At one point, that trio was being chased by another steamrollin trio: Cancellara, Flecha, and Gutierrez. Gilbert and Kroon were less than anxious to work with Pippo, who’d beat them with one leg in the sprint, so the group never really clocked in for some hard work – and yet, they were only caught with 600m to go. That’s how fast a group like that goes even without cooperation. 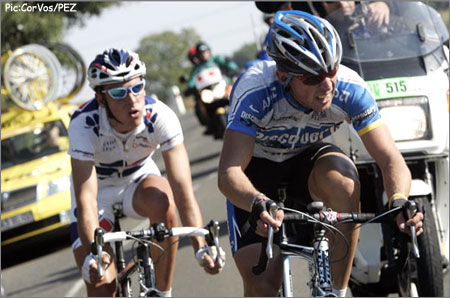 Philippe Gilbert has been threatening to win at Paris-Tours for awhile. He got together with Stijn Devolder back in ’05, but didn’t make it to the line. This type of race fits him perfectly – super hard and seemingly favors the uber-aggressor. 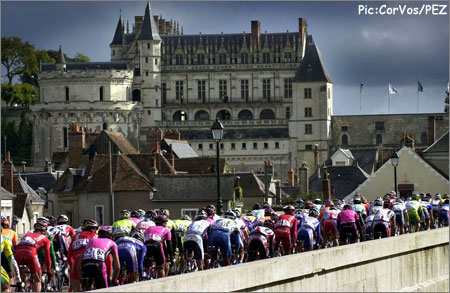 Somebody will win Paris-Tours this weekend no doubt, and another guarantee: that chateau will be there too.

A Story Well Worth Reading
This story appeared a couple years back in our Paris-Tours preview. I think it’s well worth a re-run:

But let’s go back to 1965, when the organisers had a brain wave. Barry Hoban takes up the story; ‘Levitan, the organiser said “We must slow the race down and prevent all these sprint finishes. We’re banning derailleurs!”

It ended-up the fastest Paris-Tours ever (45.029 kph for 246.8 kilometres, an average which was not beaten until Hendrik Redant won at 46.745 kph iin 1992). We were allowed a single ring and three sprockets, if you wanted to change gear you had to stop and move the chain across by hand. I rode 51 x 15 for the full distance, it was just so fast that you daren’t stop. 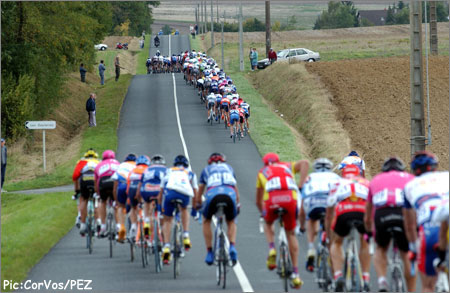 Can you imagine this scene with no derailleur?

Karstens won, but he was well organised his whole team stopped together approaching the finale and chaged to the 13 sprocket. They team time trialled back and Karstens won the sprint on the big gear. One of the two years, (it was run with no shifters in ’65 & ’66) Anquetil decided he wasn’t going to mess around changing gears and would ride the full distance on 53 x 13. In those days the early kilometres were a bit lumpy and he ended-up struggling. His whole team had to stop so he could change down then they had to chase to get him back.’

We asked Barry about that second place in 1967: ‘I think that with an older heaad on my shoulders I could have won that one. There were 17 of us away and I knew Van Looy was the man to beat so I put myself right on his wheel. He just eased-up and let us slip out the back, I paniced a bit and went round him and back to the front. Van Looy had a big jump and later in my career I learned that with guys like him and Sercu you had to go before they did. On that occasion I let Van Looy go first and he put two lengths into me, I closed it back to half a wheel at the line, but it was half a wheel not far enough.’ 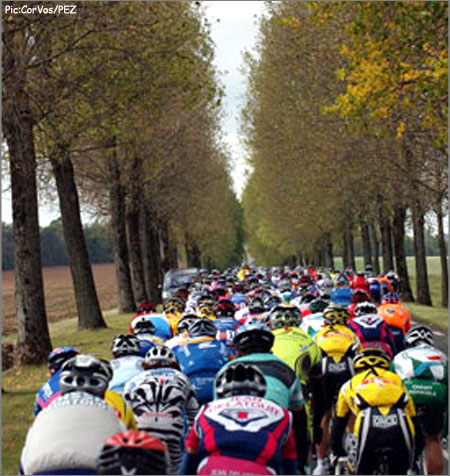 Does he think Paris – Tours has changed much since he last rode it? ‘Not really, it’s fundamentally the same race – one for the sprinters. Having said that and even although the sprinters teams are so well organised these days you can still get lone winners – look at Virenque.’