Sometimes the Amstel Gold is dismissed as a minor Classic because it hasn’t been around that long. But if you believe that, you need a reality check: brutal course, strong winners, passionate fans and run off in beautiful Limburg. This a real, strongman’s event, and Pez set off in hot pursuit for all the roadside action… 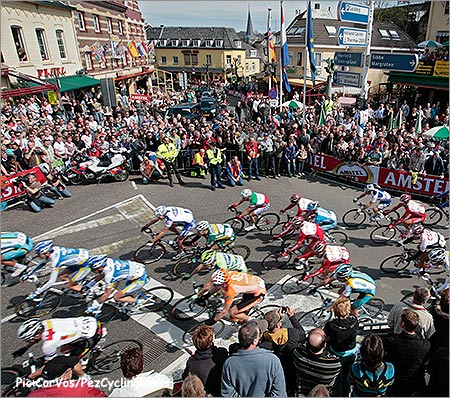 Of course, the chase starts in advance as my Chauffer Presse, Peter Easton of Velo Classic Tours, pours over the maps and lays down a schedule for the day. We’re aiming for six viewing spots plus the start, but it’s flexible – thank God, as it turned out, because the Dutch fans take charging around the countryside for multiple viewings as seriously as the Flemish do for the Ronde. 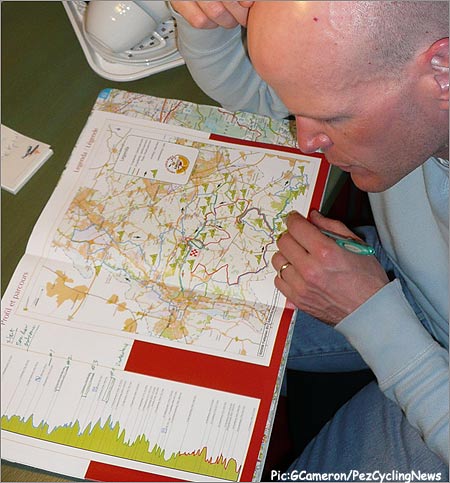 The other vital precursor is a fine meal at Annaline Doelen’s ‘Mes Amis’ – salmon tartare and lamb steak to follow with a plush red wine and my preparation is more or less complete.

Race day kicks off with a stress-free roll across the Market Square to check out the start area, grab some pix and shoot the breeze with whoever’s around. Gustav Larsson from CSC is looking forward to the race: “We have a strong team, and we’re in form. We hope to keep ourselves together for the final so we can try to do something special.” 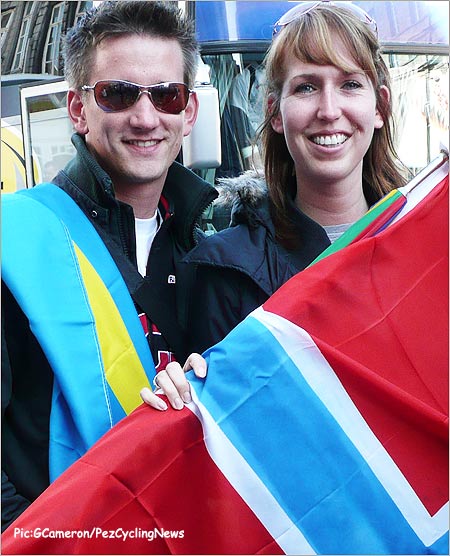 The CSC bus is a hive of activity and we bump into fan club members Ben and Carola who are following Kurt-Asle Arvesen. What’s their plan for the day? “To follow the race, see it as many times as possible and hope for a CSC win.”

Simon Gerrans loads his bottles into the cages, checks his front wheel, then gets a good luck hug from his parents. Kay and Alan will also be taking part in the day’s other major sporting activity – cross-country race watching. 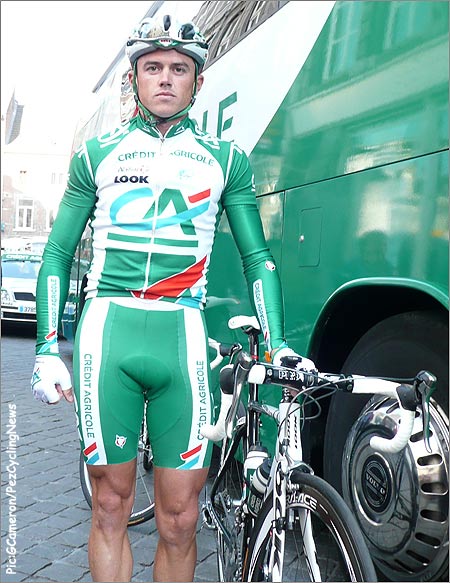 Simon Gerrans before: “It’s gonna be a hard day but then the world cups always are. but the weather is good, and we’re going to see what we can do.”

“We’ve been with Simon for a week down in Monaco and now a week here watching the races. It’s hard to get to the Tour de France for us, but this is great … to be part of this atmosphere. We’re really proud of what’s he’s done and how hard he’s worked.”

Where are you guys going to check the race out? “We’re going to take a bit of a trip out to see the race early, then go to the Cauberg – we’ve heard that’s where it all happens!” 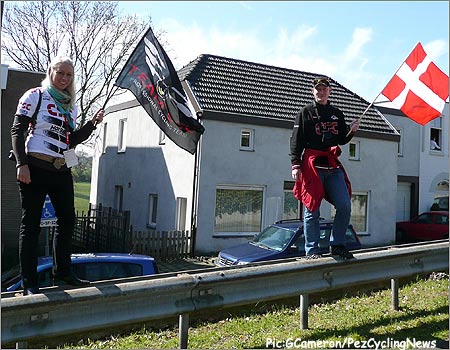 Pete and I jumped into the Velo Classic Tours battle bus and rolled out to our first viewing, 3 kms from Klimmen. We choose the bottom of a hill between climbs three and four after a tight left-hander, and find yet more CSC fan club members.

Ajo and Henrik are on the crash barriers with their flags. Does this race mean anything to people from outside Holland? Hell, yeah …….. Ajo says: “This is our ninth year here, it’s a great race, especially when the sun is shining like today. Jens Voigt is my favourite rider, but I support the whole team. As Jens is not here, I hope Frank Schleck will win today.”

Ajo told us the fan club got to have dinner with Bjarne Riis and his riders last night. What’s the deal for the fan club when the sponsor changes? “We don’t know ….. Bjarne just smiles when we ask him this!” 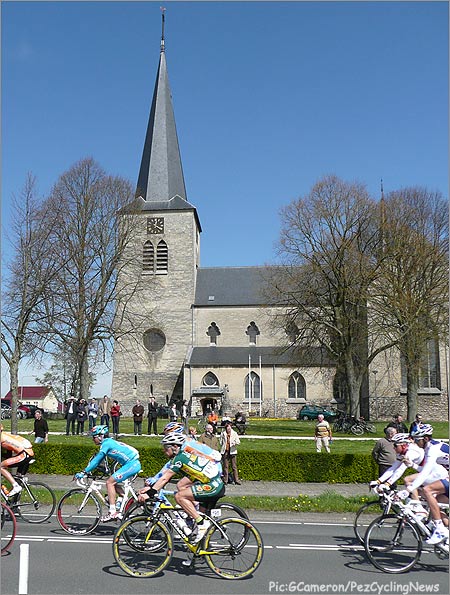 Point two for us should have been the Cauberg, but the oraanje tide of people with similar plans brought us short of target. No worries though – just more illustrations of the race’s impact. Just as the morning service ends, the churchgoers take up position to check it out. I wonder how many of them prayed for Thomas Dekker to win?

We also see why traffic might not be moving so fast – a local service bus has been abandoned like some Marie Celeste throwback. We see the Pied Piper driver leading a line of devoted passengers back on board as we head out. 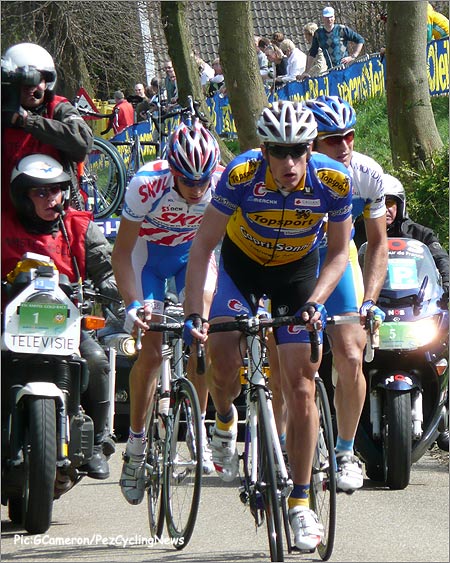 The weather is gorgeous: sunny, 19°C and not as windy as the sportif day. The apple trees are blossoming, the fields are green and as 95% of northern Europe takes to wandering on the race course, the three breakaways are suffering out front.

Also suffering is a perfectly innocent family saloon car – just outside Slenaeken we watch an SUV with a body-image complex aim for a gap fit for a moped. The scraping noise hurts, but not as much as watching the driver casually hand over a business card before driving off. No time for details when the Amstel Gold is pouring by!

We shoot through a safer space to cruise up to the Gulperberg … the crowds there are massive and it’s easy to see why as the peloton wheezes its way upwards. It’s like watching spiders trying to crawl out a very well-polished bath! This is a real race – the riders have 31 of these hills to suffer. 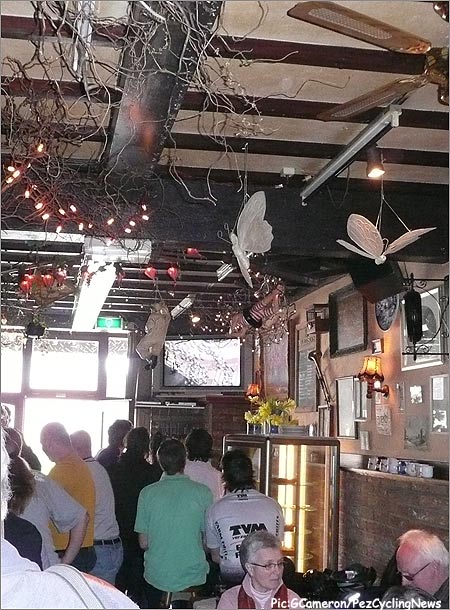 Pete and I decide to check out the on-screen action in a local tavern, so we roll in and order our coffees. Two big screens in one bar: PSV Eindhoven soccer team in action on one screen. Amstel getting its rightful slot at the front on the other screen. The Eredivisie title (Dutch soccer equivalent of the Super Bowl) is decided today but only two people are even vaguely interested. Everyone else is glued to the race, drinking the sponsor’s brew, and a few glasses of the local Gulperen.

In our truthfully very short visit to the bar, the breakaway lead dwindles from 3.23 to 1.30. The race is boiling up as the day starts to cool just a touch outside so it’s time to get moving. 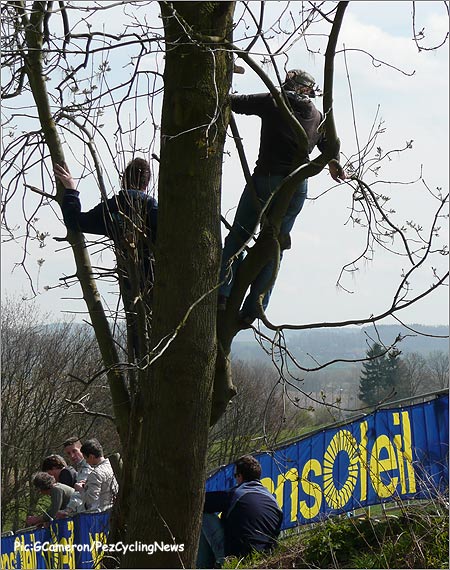 You know how they say muscle memory is when your body remembers how it used to do something? I got a hellish flashback to the Keutenberg during the Sportif, so thank God it was blocked to the public today – with our press parking permit, we head to the finish to check out the finale on the big screen, then watch the melee once the winner arrives.

Hanging out around 20 metres after the line, there’s a minor frenzy. The dope control numbers are announced leading to a bristling of Blackberrys and varying degrees of text-savvy from the soigneurs as they send the info up the food chain.

The noise is building down the Cauberg, the choppers are closing in and the final sprint unfolds. Schleck’s on the front but he’s not going to hang on as Cunego comes by for another Classic victory. 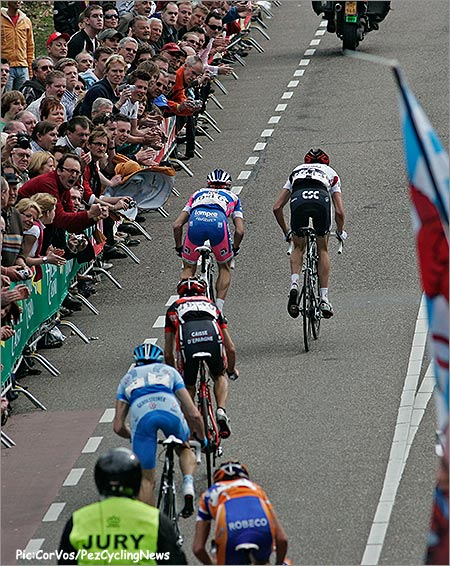 I watch the Lampre backroom staff checking Cunego’s win on the big screen – they jump into the air still watching the pictures as their man hits the line. But as soon as they land, they’re grabbing the Little Prince as he trundles home. 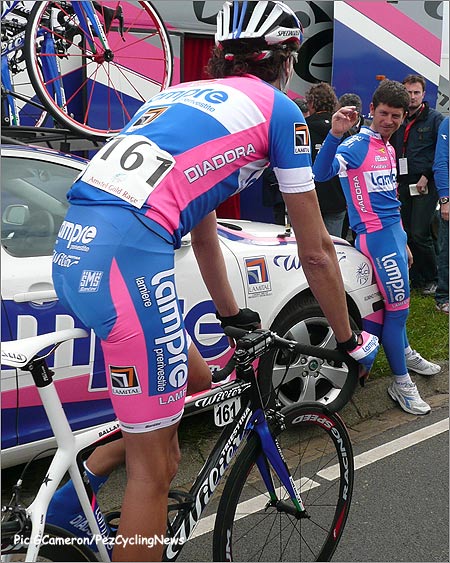 It’s like watching a sea of refugees as the riders come past the finish line. Simon Gerrans looks like a completely different person to the one we met at the start – shattered but the way his soigneur congratulates him, you just know that 12th place is a huge result for Credit Agricole. Thomas Voeckler looks smashed. Christian Pfannberger (6th after an attacking finale) is wobbling around. It’s a brutal scene. 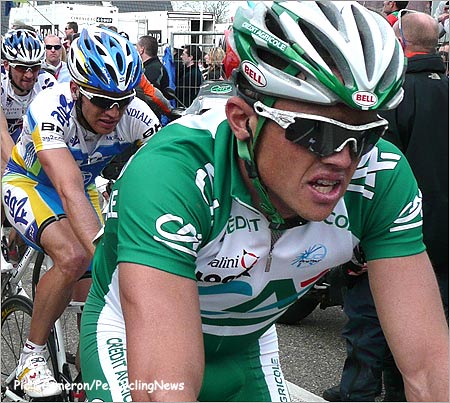 I meander down to the CSC bus and hook up with Carola and Ben again – although their guys didn’t quite pull it off, they’ve had a good day. “We must have seen the race about ten times. I used to live here and know the roads which is a big help!” says Ben. 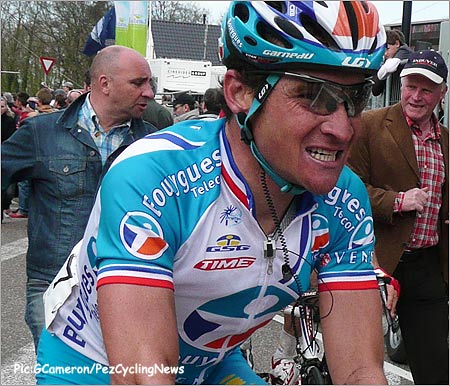 Carola is laughing about cheering for Marcus Ljungqvist: “His plane is out of Maastricht at 5.30pm and it’s 5.10 already – I think he’s still in the bus! We shouted all day for him but we didn’t see him, but we saw Kurt four or five times. We didn’t win, but you can’t win every race.”

Indeed you can’t win them all, but our high-speed tour of Limburg’s hills, in convoy with a phenomenal volume of fans, proved without doubt this hard, hard day has won a status as valid as any other Classic. 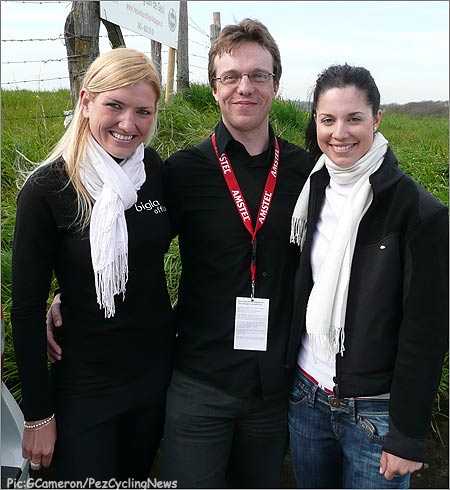 It’s a Team Bigla-PEZ sandwich thanks to Veronica Andreasson and Jennifer Hohl. Gord’s face pretty much says it all…

Our day is done, but not without one final result on our way back to the bus. We bump into Pez diarist Veronica Andreasson, and her Bigla team-mate Jennifer Hohl. Veronica is back racing after her near fatal crash last summer and things are looking good with a strong ride in the front group at the Ronde van Gelderland.