Five nights down, just one to go in Gent. The result was anything but a formality, and a thrilling final night led to a hometown victory via Gent’s superstar Iljo Keisse. PEZ was on the scene (as always) – Stephen Penny takes us inside.

44th Toekomst Zes Daagse
Before the main event each night the Toekomst Zes Daagse (Futures Six Day), which is part of the Under 25 UIV Cup, race takes place. These events for potential Six Day riders of the future normally have a flying lap or 500 metre Time Trial followed by a 200 lap Madison with 4 intermediate sprints every 50 laps. On the final day they just race a straight forward 250 lap Madison with 5 sprints, again every 50 laps. The week was plagued with crashes and on Friday there were 3 crashes in 9 minutes of racing, although thankfully no one was seriously injured. 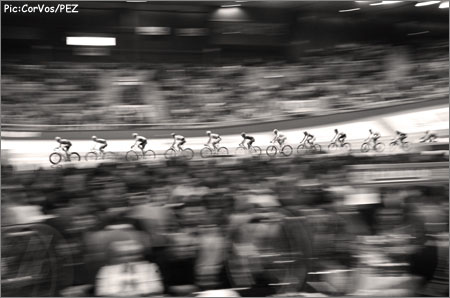 The class act in the field all week has been Belgians Tosh Vande der Sande and Stijn Steels, nephew of former roadster Tom. They both hail from the Waasland area of Belgian, close to Antwerp. At the end of the Six Days they won by 2 clear laps from Americans Guy East and Austin Carroll, themselves winners of the same event at the Dortmund Six. In 3rd at 3 laps were Belgians Van Immerseel and Vlasselaar with the rest of the 11 team field 8 laps and more behind. It will be interesting to see if Vande der Sande who’ll be just 18 years old on the 28th November and Steels, 19, follow recent winners of the UIV Cup like De Ketele and Mertens into the pro Sixes or pursue careers on the road.

Tech Talk
With bicycle and equipment technology on over drive in the current market unsurprisingly some of the latest gear is on view here on the Ghent track. The frames are a mixture of the latest lightweight carbon fibre and aluminium. Carbon is also used on some forks, seat posts, handlebar stems etc. The majority of riders now have the straight rather than curved forks too. 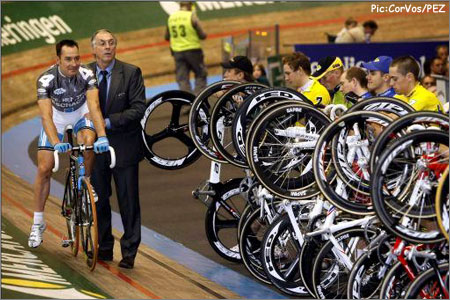 It’s pretty easy to get a glimpse of the wheels during the post-race honoring of the retiring Erik Zabel.

Everybody is riding on the ‘hi profile’ deep carbon rimmed ‘zipp’ style wheels which are stiffer and more aero dynamic than traditional wheels and a few are even using three, four or five spoke versions. In the Derny races and TTs they will use a disk wheel at the back but they are not used in the Madison and Points races as they are in the World Championship races these days.

During each night of the Six the riders will race approx 120 kilometres. That may not sound a lot to club riders but when one considers the changing speeds they race at plus the stopping and starting at late hours of the night it is still impressive to witness. In the Madison, Points and Elimination races they use gear ratios of 52 x 16. For the TTs it is a 52 x 15 and for the Derny paced races the much bigger 54 x 14. 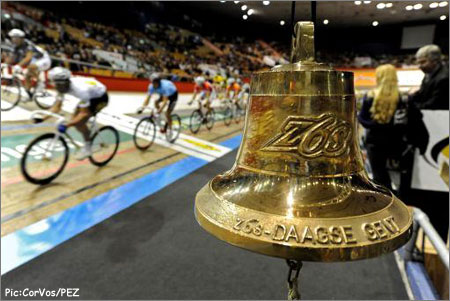 After some confusion in earlier reports it was confirmed Marc Hester retired from the Ghent Six due to an injury sustained in his fall on Friday night, this left Luke Roberts again only racing in the individual events.

The Sunday programme has only 2 Elimination and Derny races and the Keirin is given a miss. The opener is as always a Points race that went to the fresh Luke Roberts. Team Elimination races always seem to see the main riders motivated and Sunday was no different the 20 points for the win going to Peter Schep / Danny Stam from Kenny De Ketele / Andreas Beikirch. The Dutch team have had a solid if unspectacular Six comfortably in 5th place in what has been their first ride together for a couple of years. 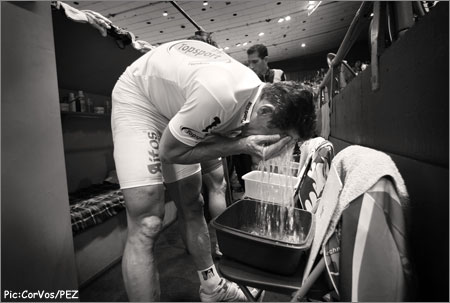 The massive pistons of Robert Bartko.

The 500 metre TT has been dominated by Iljo Keisse and Robert Bartko and he made it 6 out of 6 in a time of 28.15 (63.943 km/h). The 20 points for the win taking them over 400 points and gaining the inevitable bonus lap ensuring they’ll go into the final Madison in control of the race. The first of the two Derny races was won by Danny Stam behind Michel Vaarten. The individual Elimination race saw Angelo Ciccone try to give Dimitri De Fauw the slip attacking from high up the banking, in a track sprinting move, but De Fauw was just too quick over the last 100 metres and took the race by half a wheel. The final Derny race featured Keisse, Zabel and Risi for what was a showdown of the big guns and it was another crowd pleaser although it was Zabel who took the win from Keisse in a tight finish.

During the 20 minute pause in the racing Erik Zabel had his farewell from the riders and spectators before being presented with a gift by the organisers and taking a couple of laps of honour. Despite being at the end of his career Zabel has raced hard all week in Ghent, coming in anything less than top condition would not allow you to be so close in the overall standings as some high profile riders have discovered in the past.

The racing resumed with a Supersprint win for De Fauw / Deneef with Dimitri taking the sprint. The word was that the organisers have actually been happy with De Fauw despite his lack of TT speed and he has a fresh start in the New Year racing for a Dutch track (and small road race) team, with Stam, Slippens and Schep. He is something of an enigma in Belgian track racing and the track team route into more Six Days may well get his once promising career going again. 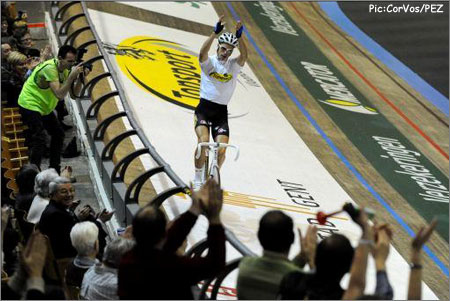 The Iljo Keisse show continued in the 166 metre Flying lap TT were the ‘Genteer’ romped around in another impressive time of 8.78 seconds, no one else again broke 9 seconds. The last race before the ‘finale’ was the Scratch won by Tim Mertens in fine style, as we keep saying he really is a rider for the future.

Finale Of The Six
The final 60 minute Madison of the Ghent Six has 5 bonus sprints every 10 laps over the last 50 laps. The ‘finale’ of a Six is the only time you have the bonus sprints that are part of Championship Madison racing. 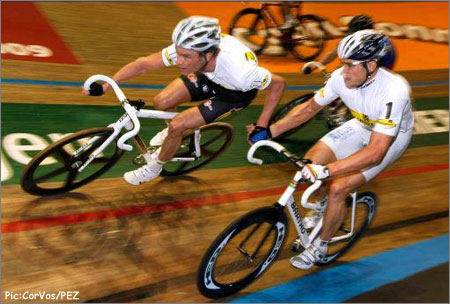 Keisse / Bartko will need to be attentive but it would be a big surprise if they gave up a race losing lap. De Ketele / Beikirch will want to push for the podium so their will be a few little battles going on during the final hour. Most of the fields remit will be forming a peleton so the shape of the chase is clear for the spectators to follow.

The final action of the 2008 Ghent Six saw the top 4 teams swapping laps early on but De Ketele made the most progress getting up onto the same lap as the 3 teams above them. From then on it was only a matter of whether Keisse / Bartko would crack or not. With the bonus sprints unimportant De Ketele / Beikirch tried to gain a lap with 50 to go but after pushing out a half lap advantage they were reeled in fairly quickly. Zabel / Lampater tried with 33 to go and it was Risi / Aeschbach not Keisse / Bartko that brought them back with 25 to go. That effectively killed any chance the Swiss had of making a last ditch attack and to rub salt in the opposition wounds. 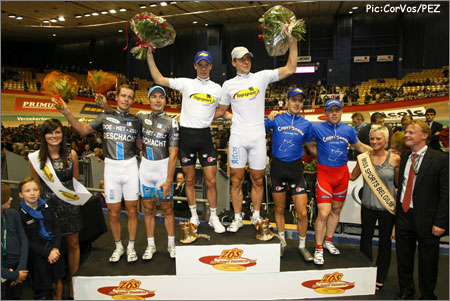 Keisse / Bartko jumped away with 17 laps to go. After their earlier efforts no one could respond and it was quite an easy lap gain in the end for Keisse / Bartko who got back into the bunch to a standing ovation with 5 laps to go and began their celebrations. Not wishing to humiliate the opposition they didn’t charge to the front and cross the line first but cruised across the finish for the result the crowd wanted. The organisation will be happy too as a home win means the fans will be back in their thousands for more of the same next year. 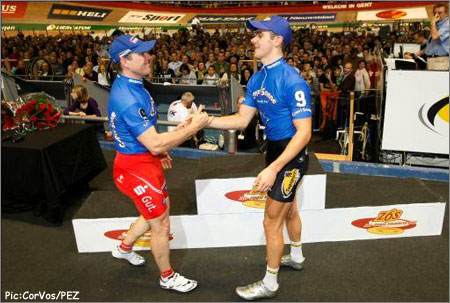 The duo of Ketele/Beikirch finished a solid third.