Fridays at the Ghent Six Day are traditionally the ‘big’ night on and off the track. On the track anyone with serious aspirations to win the event must be able to still dig deep and avoid losing laps in the Madison. Off the track many locals put on their jacket (coat) and tie, bring their wife or girlfriend and spot the local professional riders of past and present who flock to the VIP restaurant and expensive seats.

This year will be no different and all the tickets are again sold out which will add fuel to local hero Iljo Keisses already burning fire. When one talks about local riders it can normally mean within 50 km of a place however Iljo’s father owns the De Karper Cafй which is less than 500 metres from Het Kuipke so this really is local. Before and after the nights racing the De Karper is full of fans coming or going to the Six and is, naturally, the home of the Iljo Keisse fan club. 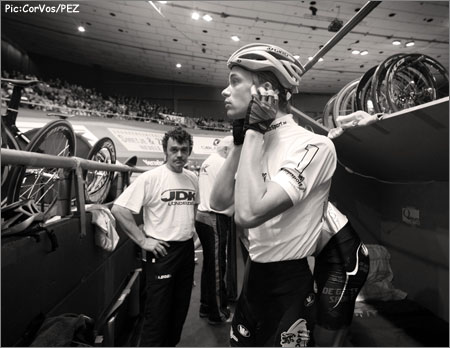 Iljo Keisse is the man in Gent.

After the traditional introduction of the teams the opening point’s race got the racing underway at 20.30 local time, it was a good start for Nicky Cocquyt / Ingmar Depoortere who took the first victors’ bouquet of the night. Cocquyt took the final sprint after he had won 2 races very late last night and with Depoortere’s struggles in the Madison at least the young Belgians had some early cheer. 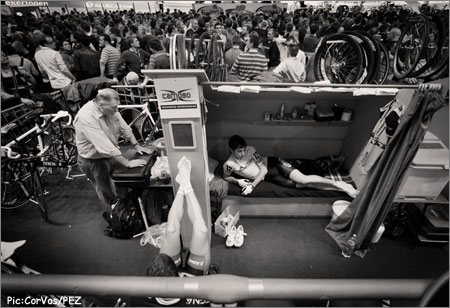 The #13 Team of Cocquyt and Depoortere takes a rest.

The Team elimination got off to a bad start with a heavy looking, and sounding, collision bringing down Marc Hester and Nicky Cocquyt, a mixed start to the night for the Belgian. The racing resumed quickly though and the top 4 teams, after sitting up in the last lap of the points race, set a hot pace that only Mertens / Muller of the rest could follow. There was then some confusion with Bartko / Keisse and Risi / Aeschbach both thinking they’d been eliminated and slowing down. Almost by default the last 2 teams standing were Lampater / Zabel and De Ketele / Beikirch. The two younger partners went head to head but Lampater out sprinted De Ketele to claim the 20 points and move the Germans to within 6 points of 200 points and a bonus lap. 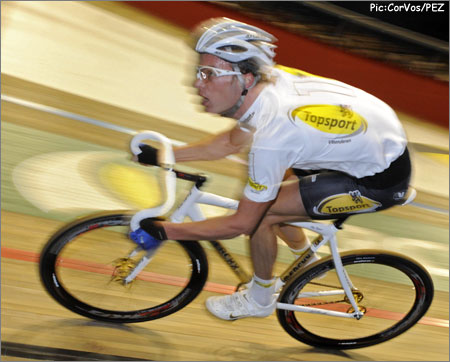 Once again, Iljo Keisse is the man in Gent.

Friday’s crowd pleasing flying lap time trial (TT) saw Tim Mertens improve on his Thursday night time clocking 8.94 (67.114 km/h) however Keisse again took centre stage, as the decibels increased he flew around the tight bends in 8.85. A little down on his 8.83 on Thursday but still 10 more points in the bag. 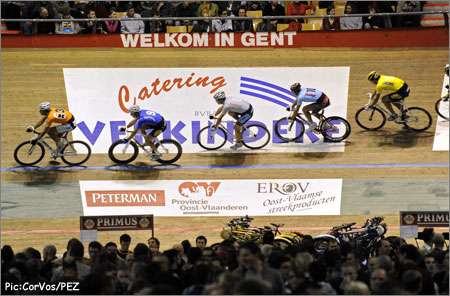 The first 40 minute + 10 lap Madison started without Marc Hester, still suffering the effects of his heavy fall an hour earlier in the Team Elimination race. The racing was fast but tight and tactical and the top 5 teams entered the final 10 laps at least 1 lap up on the rest of the field. There was a brave effort from Risi / Aeschbach to break away but they were caught 4 laps from home and Keisse again showed his speed and crowd pleasing skills with another bunny hop across the finish line. With Hester down, for now, Aussie Luke Roberts paired with Nicky Cocqyut giving Ingmar Depoortere a break, they finished 4 laps down. 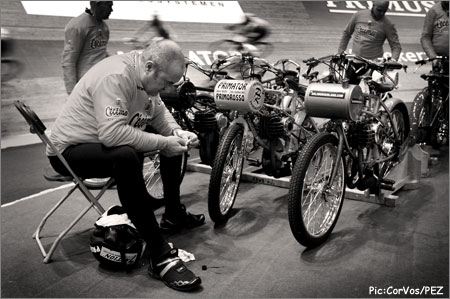 This year saw the introduction of a more environmentally friendly fluid being used to power the Derny motors. Of course it is better for the health of the paying customers and our much maligned planet, but the smell in the air the Derny bikes have traditionally brought to Het Kuipke is gone forever. The first Derny race over 60 laps was for the bottom half of the leader board. Crowd pleaser and fierce competitor Joop Ziljaard as ever got the crowd involved taking his rider Dimitri De Fauw off the front. With 2 laps left though they were locked in a 3 way tussle that Pim Ligthart won behind another legend of motor pacing, Dutchman, Bruno Walrave.

The first of two individual Elimination races on tonight’s programme was another chance for the lesser lights to shine as Steve Deneef took a rare win in the two up sprint from one time road man sprinter Leon Van Bon. The Derny race for the top 6 teams produced the usual excitement, Derny races being 2nd only to the chases in popularity at Ghent. This one saw Risi, behind Ziljaard, overtaken very close to the line by Kenny De Ketele paced by Luc Uytfanghe. This was a rare win for the Belgian pacer who sports a rather large handlebar moustache. The 500 metre TT was once again a Keisse / Bartko fest in a winning time of 28.03 (64.217 km/h) although slower than Thursday it was still over a second better than the rest. Tiredness amongst the other teams showed with neither of Jorgensen / Madsen or Mertens / Muller going below 29 seconds this time.

Marc Hester still hadn’t returned to the track so Luke Roberts was again joined by Nicky Cocqyut for the 2nd Madison. The main battle though would once again be at the top of the leader board though with Keisse / Bartko closing in on 300 points and yet another bonus lap. At their current rate of scoring the will have close to 500 points by the finish on Sunday. Zabel / Lampater went into the last Madison comfortably ahead of De Ketele / Beikirch on points but the latter pairing had close to 200 points and their bonus lap. Risi / Aeschbach were hanging in at 1 lap down in 4th place but in reality they’d have to take 2 laps back to win this Six Day and that is unlikely to happen with the form of Keisse, especially, and Bartko are in. 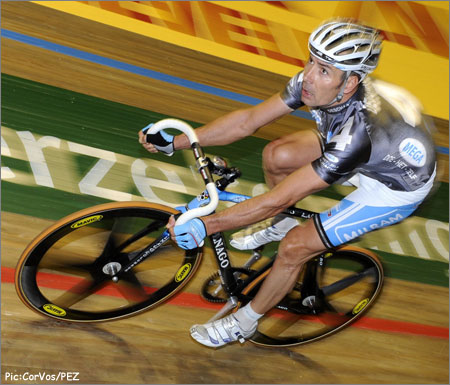 Zabel and Lampater have been solid, but can’t keep up with the onslaught of Keisse/Bartko.

Things didn’t quite go to script in the race though with Zabel beating Aeschbach to the line, the Swiss banging his handlebars in frustration, Stam / Schep joined them 1 lap ahead of Keisse / Bartko and De Ketele / Beikirch. The win gave the German pair a clear lap lead although Keisse / Bartko moved closer to a bonus lap that will see them regain the lead. 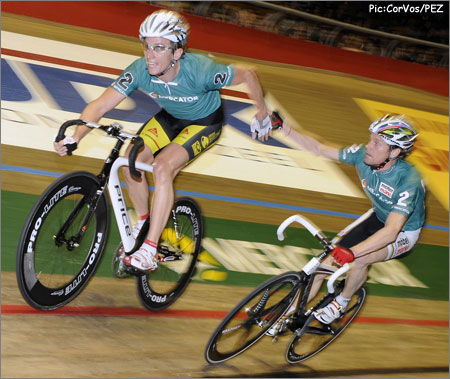 Bruno Risi is going ok with Aeschbach, but it’s nothing like the high-power duo he forms with Marvulli.

Both Bruno Risi and Danny Stam crossed the line shaking their heads although the reason why was unclear. Worryingly for Kenny De Ketele he twice came on the wrong side, of his partner, Andreas Beikirch to make a hand sling change and Beikirch was noticeably displeased. They slipped to 4th overall too and after 4 nights fatigue and a little pressure could be telling on young De Ketele, still that bonus lap would see them return to 3rd. 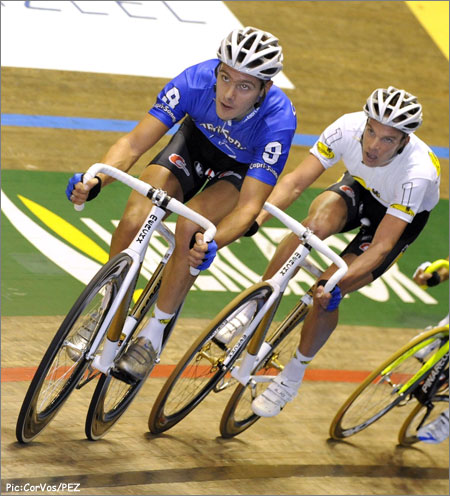 Kenny de Ketele is having a good Gent, but there’s still a long way to go.

Normally the next event, the Supersprint, would see the top guys easing off especially following a tough Madison and with the exception of Keisse / Bartko that was the case. With the favourites needing 10 points for a bonus lap, and 20 on offer to the winner, they stayed with it into the 6 team sprint but blew on the last lap. The winners were Tim Mertens and Andreas Muller who continue to clock up decent performances night after night. The 20 lap Scratch race was a chance to indulge the crowd in some clapping and Mexican waving but the 8 laps see the racing start and a sprint win for Dimitri De Fauw who has had a disappointing week but showed he can still fly in a bunch sprint.

The last round of Derny racing for the main players saw Andreas Beikirch go half a lap up on the field within 20 laps. Perhaps still fuming from his earlier Madison problem he caught the field soon after only for Iljo Keisse to follow his example and try the same thing, paced by Michel Vaarten. With the field in sight Beikirch, after settling at the back for a while, decided it was time to go again and he went to the front in pursuit of Keisse who was continuing to close. With 3 laps left though Keisse was out of the saddle and made the junction. He still had work to do but was then paced all the way to the front beating Beikirch on the line and he was again disappointed, this time with his pacer. The Derny racing is all about show and although Keisse did have to go hard even a non cynic would have to agree it was a win ‘made for the home crowd’. 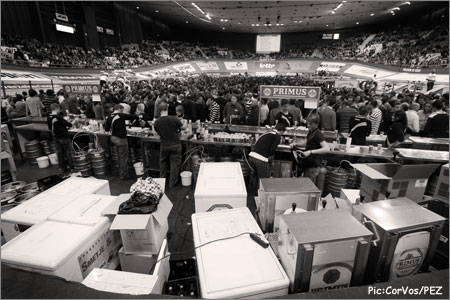 The last individual Elimination race went to Ingmar Depoortere who showed that away from the Madison he is a decent trackie. The only other item of note was De Ketele taking a few points to get that bonus lap for himself and Beikirch. The last Derny round went to Steve Deneef, with his 2nd win of the night, behind Ziljaard who got his win.

Closing the night were two Keirin races, a recent addition to the Ghent Six, the first going to Luke Roberts who had a quiet night after the accident involving his partner Hester. Bartko gained the points his team needed for a bonus lap and a return to the overall lead. The 2nd and final race on the programme was another late night bouquet for Dimitri De Fauw, 2 wins each for him and Deneef tonight, who pulverised the field of 6 with a sprinting master class:

Magnus Backstedt: Back To Action