Tirreno-Adriatico is a highly coveted stage race for its rich history and varied terrain. A great build up to the season’s first classic, Milan-San Remo, the Italian stage race affords riders aspiring to the MSR title a challenging parcours that builds form and moral. With the quality of the field, especially this year, Tirreno-Adriatico is the place to be for 2008. Paris-Nice, the other major stage race taking place, is rainy and cold. 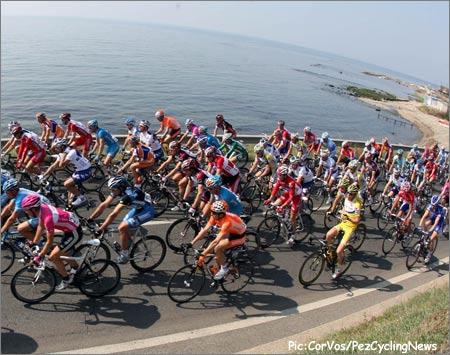 While half their teammates are piling on the layers in frozen France, these lucky boys will be piling on the sunscreen on the shores of the Tirrenean Sea.

Race organizer ASO and the UCI have been at each other’s necks for the last month, so riders like Tom Boonen, Mark Cavendish and George Hincapie have decided to take to the roads of Italy instead of tackling the French stage race. With their addition to an already solid field, Tirreno-Adriatico gives cycling fans an excellent chance to see a Tour de France calibre field early in the season.

A prestigious event, Tirreno-Adriatico has been won by many great pros in its 41 year legacy, including Davide Rebellin, Oscar Friere, Abraham Olano, Francesco Casagrande, Tony Rominger, and Michele Bartoli. Roger de Vlaeminck, the rugged Belgian, took the event a record six times, all in a row, from 1972 through 1977.

All types of riders have taken the Italian stage race. Rebellin and Friere are great sprinters who can climb well enough, Rominger and Casagrande were both climbers, stage race guys, while Olano and de Vlaeminck were riders with tremendous power. Last year’s winner, Andreas Kloden, won’t defend his title as the Astana team hasn’t been invited to Tirreno-Adriatico or any other race organized by RCS Sport.

Running 7 stages over 1122km, the route for the 42nd edition is one built for the all-arounder. Stage one is for the sprinters, as it finishes flat after climbing the Bivio de Sassicari twice on the way to the finish in Civitavecchia. Look for big guns like Tom Boonen, Paolo Bettini, “Ale-Jet” Allessandro Petacchi, Robbie McEwin, Oscar Friere, Mark Cavendish, Baden Cooke, Danilo Napolitano, and Luca Pagliarini to contest the stage.

Stage two is conducive for the climbers as it finishes uphill into the beautiful Umbrian town of Gubbio, after having passed over two significant climbs earlier in the day. Inigo Landaluze, 2005 Dauphine Libere winner, will be active at the front, as will ‘The Cobra’ Riccardo Ricco, who tends to use Tirreno-Adriatico as a launch pad for the rest of his season.

Stage three is a good one for the climbers again, as it takes the field up to the finish in Montelupone via a 12% climb, with maximum gradients of about 20%. It should give one of the climbers in the race a real chance to create a gap and gain valuable time on the field. Possible candidates for victory include climbing powerhouse Gilberto Simoni, AG2R’s Tadej Valjavec, or Italian national champion Giovanni Visconti. Also, as in any race he enters, Paolo Bettini will no doubt be on the front looking for opportunities. 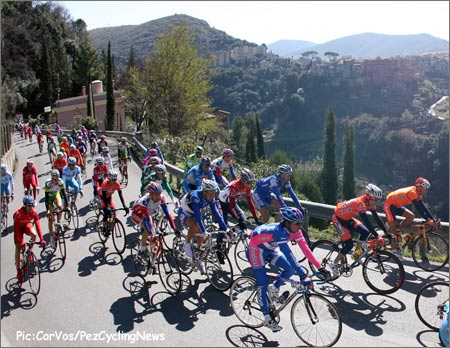 Last year’s edition rolled out of Tivoli and its famous gardens near Rome (the Giro will visit her again this year), and while the towns may change the Cypress trees and sunny days remain the same.

Stage four, while hilly, does not finish with a climb, so some of the sprinters should be around at the end to try for the win. However, the stage is made for a break to go up the road, as many of the GC hopes will no doubt be saving their energy ahead of the deciding time trial the next day. Cofidis’ Nick Nuyens may have a go in stage four, as well as Francaise des Jeux’s Sebastien Chavanel and High Road’s Kim Kirchin.

Stage five, a 26 kilometer time trial, will prove decisive for the event as the winner will no doubt be someone who can put up a strong race against the clock. Look for world time trial champion Fabian Cancellera and Belgian champion Stijn Devolder to have a decent ride, as well as Vladimir Karpets of Caisse d’Epargne, Gerolsteiner’s Sebastian Lang, and Slipstream’s David Zabriskie. Finally, watch out for “il falco” Paolo Salvodelli, who now rides for the continental team LPR. A wily veteran with a big engine, Salvodelli will be keen to show himself ahead of the upcoming Giro d’Italia, which could be the last for the old pro. 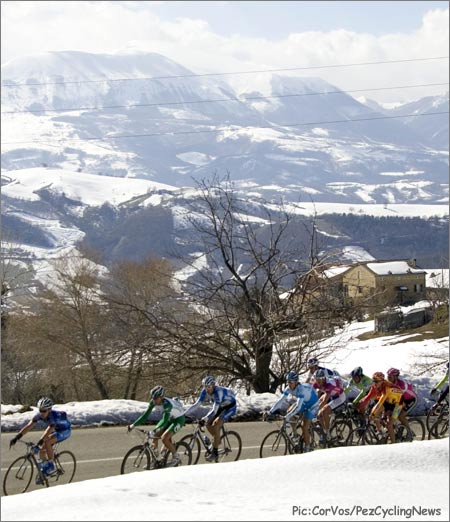 It’s not all palm trees – the race crosses the mountainous spine of the Italian boot, and although this year’s edition never gets above 600m, it is still March.

The sixth stage of the race will once again give the climbers a chance at victory, as the pack will go over the Castelfidardo climb four times before tackling it one more time on the way to the finish for the stage. This stage will be the last chance for someone to try for the overall, as the seventh stage is mostly flat. Expect a flurry of attacks leading to the finish, with a rider like Franco Pellozotti, Igor Astorloa, or Fabio Baldato trying their hand on the hilly finale.

Finally, after a hard-fought week of racing, the field will embark on the largely ceremonial seventh stage, which finishes in San Benedetto del Tronto, on the shores of the Adriatic Sea. A sprint finish is all but assured, as the final 80 kilometers are dead flat. Boonen and the other big sprinters will be out in force again for stage seven, capping an excellent week of Italian stage racing.

Tireno-Adriatico should be an exciting race with fast finishes and intense competition. The last stage race before Milan-San Remo, it will allow the sprinters’ teams one more week to get things straight ahead of the classics season. Meanwhile, the stage racers and climbers will be looking to perfect their form ahead of the Wallonian Classics and the Giro. Expect most of cycling’s heads of state to be at the front of the peloton at some point during the race, with the victor having to fight all the way through to the final stage for the overall win.