The smoldering heat at the 24th edition of the Commerce Bank Philadelphia International Championship almost melted the pavement on Sunday, June 8th, but that didn’t stop the racing – nor our own eye witness look at the day… 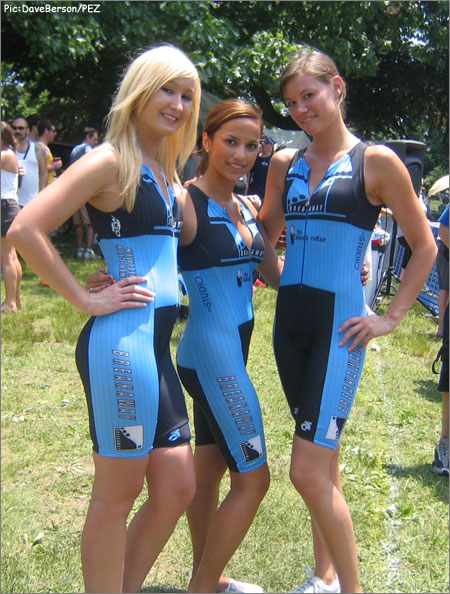 Things were pretty hot at the Breakaway Bikes/Scott Bicycles party on Lemon Hill thanks to Chelsea, Crystal, and Megan. 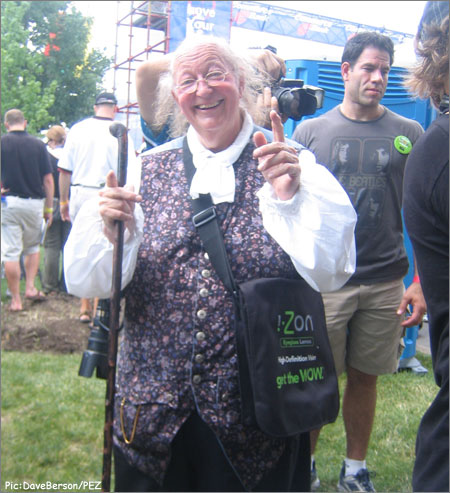 PEZ pounded the pavement early to see what some of the riders expected from the day. First up was Fred Rodriguez of Rock Racing USA. 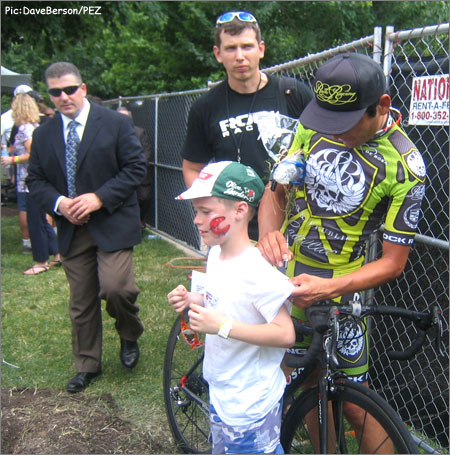 PEZ: Freddy, What’s the plan for today and how does the heat (expected to top 100-degrees) play into things?

Fred Rodriguez: The goal today is to win and we feel good about the heat. Sevilla is strong and I’m strong.

Freddy ended up 3rd on the day following superb efforts by Sevilla and Hamilton. Rock Racing didn’t reach their goal of winning but they sure made an impression, both in results and in appearance. 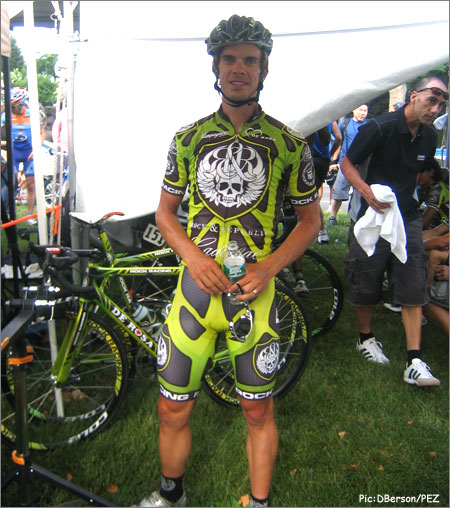 PEZ. What do you expect today?

Michael Creed: Oscar and Freddy have good form. We will go out and fight as much as possible. The goal is to win. Also, Freddy and Oscar are good in the heat. I expect only 30-45 riders to finish, it will be brutal. 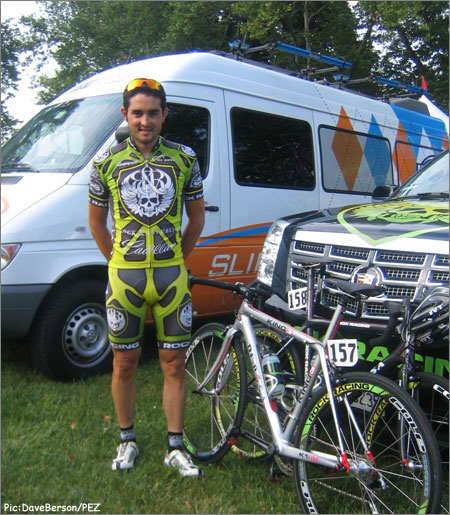 Through an interpreter PEZ spoke with Oscar just before the start of the race.

PEZ: Oscar, The form seems good, are you confident for today?

Oscar Sevilla: I am good at the moment and have a lot of confidence. I like the hot weather but must be careful about hydrating. But, I have done well in conditions like this. The plan has been laid down but we must execute to win.

This reporter caught Tyler at the massive Rock Racing “Hotel” or team bus. He was heading to the start/finish but answered a quick question.

PEZ: How are you feeling and what are your thoughts for today?

Tyler Hamilton: I’m feeling good about the team and really enjoy racing. My broken hand is the only problem at the moment.

PEZ witnessed Tyler grab a feed towards the end of the race and grimace in pain, but continue to ride on. He rode hard for the team, even lead a 3-man TT to pace back Sevilla after an early mishap on the parade laps. He was in one of the longer breaks of the day and then rode as a perfect teammate while Oscar was up the road. Promo girls and cool cars aside, Rock Republic Racing rode as a team and was impressive. 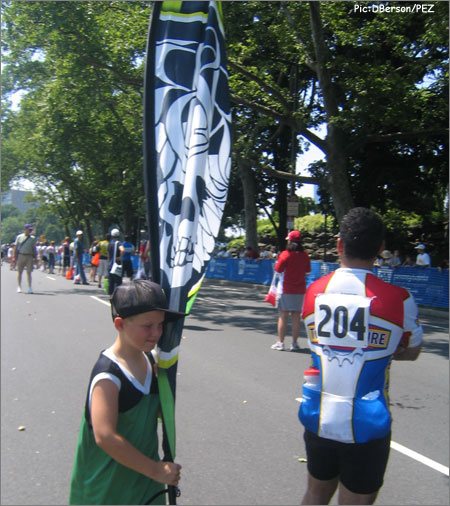 Ina Teutenberg of Team High Road, winner of the first two races of this year’s Triple Crown and Liberty Classic winner in 2005 and 2007 seemed very relaxed before the start of her race, run on the same course as the men. But, Teutenberg said she “was very nervous because anything can happen.” Teutenberg went on to say that “she heads back to Europe for a three day stage race in Holland and then to the Women’s Giro during the first 10 days of the Tour de France.” She continued to say that “today’s race is more stressful than a stage race because for one day you put it on the line, you win or you don’t. I’m not a GC rider so this is harder.” It ended up perfect for Team High Road in the Liberty Classic with Teutenberg winning the overall Triple Crown and taking 1st and 3rd on the Podium. 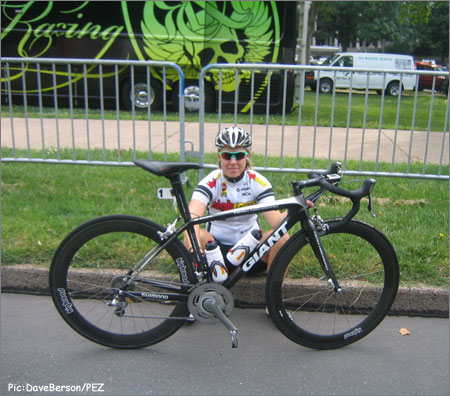 A seasoned Pro-relaxed and ready and sitting as much in the shade as possible. 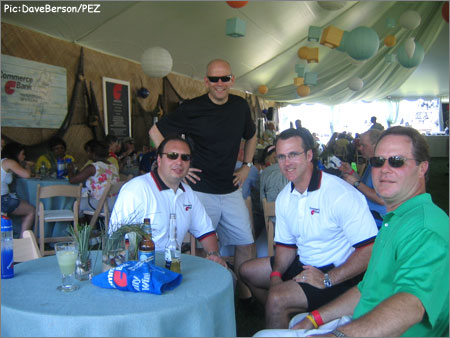 Commerce went all out this year with gourmet food provided by Culinary Concepts of Philadelphia.

Shelter was required for this reporter so Pez found the VIP accommodations to more than adequate. Depending on your tastes, clams, chicken, salad, or custom ice-cream Sundays , as well as a cool beer, were on the docket. 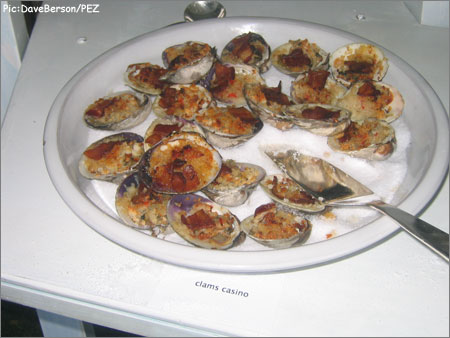 After lunch a stroll through the jam packed expo area was required to walk off some of that fine lunch. Skinny Water sounded like a great thing to cool off with. 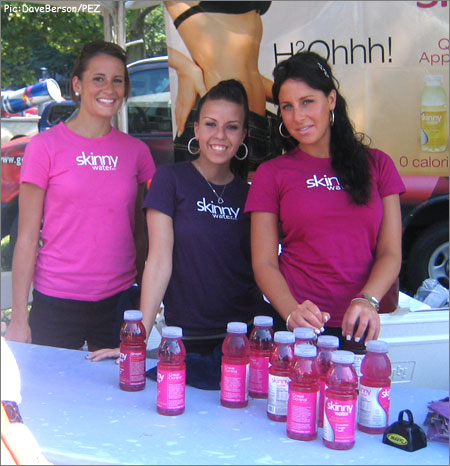 Any and Teri were quite popular at the Rock Republic merchandise truck. Loud music, tattoos, plasma TV, and some cool swag helped add to the party atmosphere of the day. 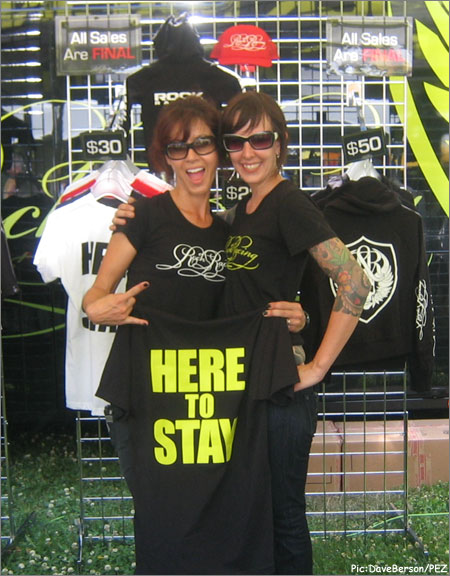 Lyndsy and Shelsia of cyclistvillage.com, caught in front of a Rock Republic truck, explained that this new social networking site for cyclist was up and that we should check it out. 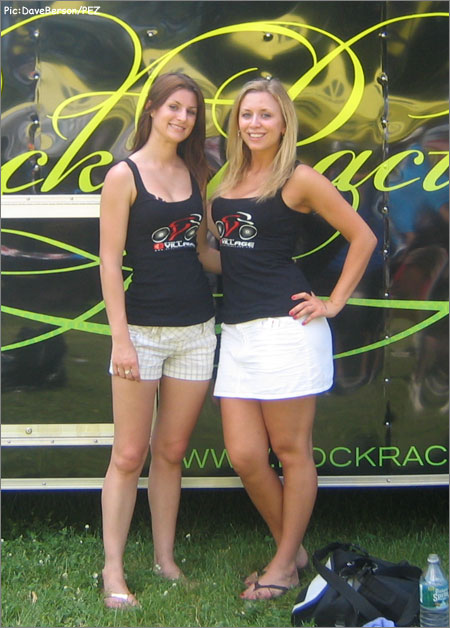 Lauren of Toyota United traded me a pic and a bell if I answered some marketing questions for her. I must have 10 entries in their data base already. 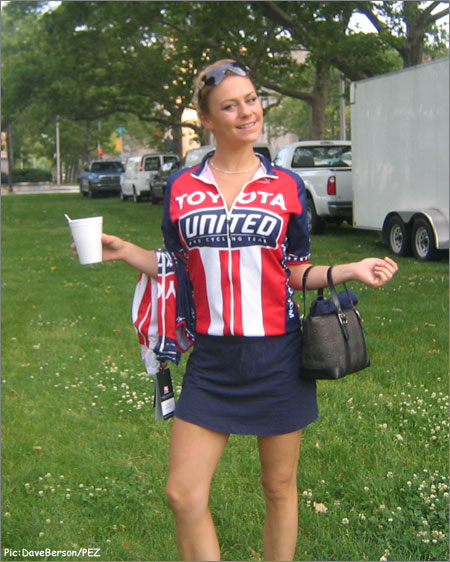 Probably this reporter’s favorite for the day was Starr of team TIME Pro Cycling. Starr was filling bottles, preparing food, and working the feed zone like a seasoned Pro. She even made that vintage Coor’s Classic Leader’s jersey look hot. I’m sure no one missed a feed from her. 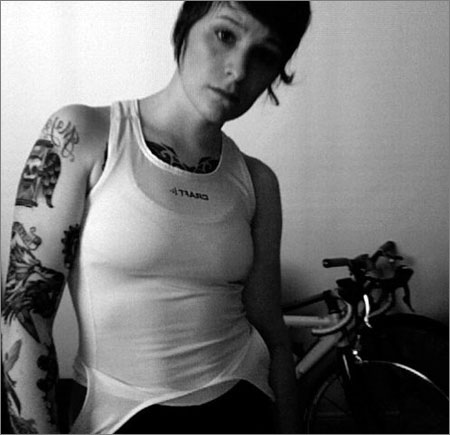 Out on the course PEZ came across Christy, Mary, and Sharrah. This was the first year for Christy and Mary and they collectively said “it was awesome.” Sharrah, who saw the race last year, said “she’ll come back every year.” She went on to say that “it was very brave for these riders to race in the heat.” 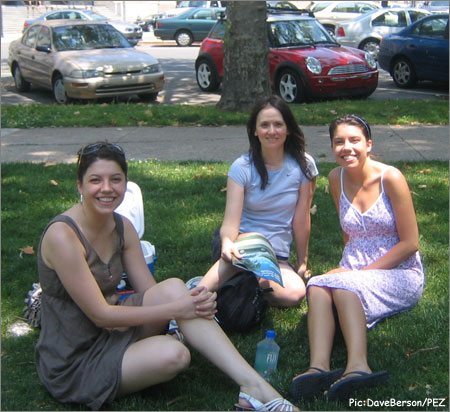 Prior to the awards ceremony we came across the real prize for the racers, the chance for a kiss and photo from sisters Nicola and Christy Angstadt. 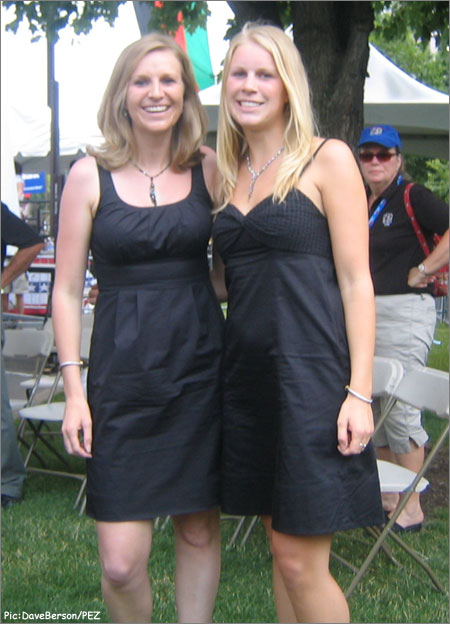 Second place finishing Kirk O’Bee said he lives in the same town as the Pez himself and hopes to meet up with him. O’Bee said that “I was good today, it’s what I do” when asked by the race announcer on his road racing result, since he won US Pro Criterium title in 2007 for the second time. O’Bee told Pez that “2nd place feels great. The team had a great week and my teammates gave me a perfect lead out.” He went on to say that “we always come to win. This is still Philly and a race we care about. It’s a classic, grueling, and we love doing these classic races.” 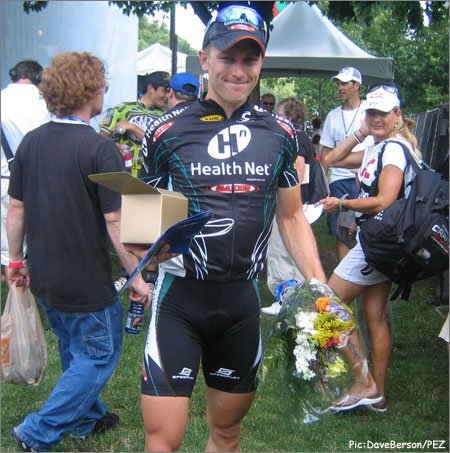 Race winner Matti Breschel said “it went warm out there, hot. It was a difficult day.” Breschel said that it was important to look after yourself with the heat. “The plan was to split the race, that 3rd break and be aggressive but things stayed together “ said Breschel. Well done on a fine sprint Matti! 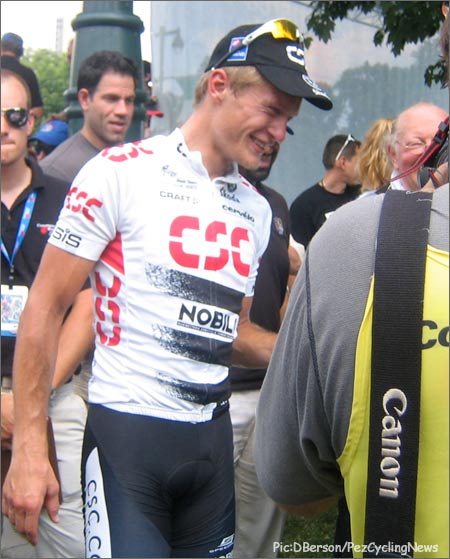 The last word comes from what I describe as “The Hardest Working Mayor in Politics,” and someone who has Philly and (you can say you read it on Pez first) the nation all a buzz about his rising political career, President Michael Nutter. OK, he’s Mayor Michael Nutter, the newly elected, popular, optimistic, and “get things done” Mayor who said “the race was awesome and I’m looking forward to the 25th event. So is this reporter. Thanks Mr. Mayor and thanks to Pez Fans for reading. 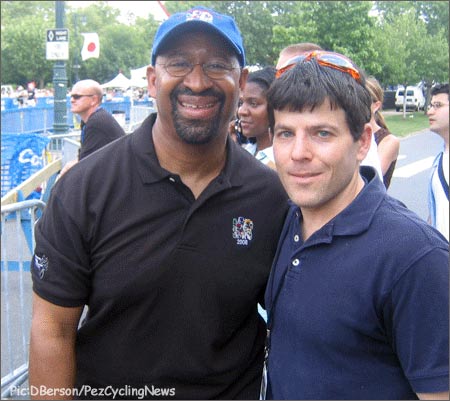 Philly’s Mayor Michael Nutter, whose wife is a cyclist and who has added a new spark to the City of Brotherly Love.