In 2007, CSC’s Juan Jose Haedo took the win out of a field sprint. The name changed in 2008 to Matti Breschel, but the team and scenario were the same. Skyrocketing temperatures led to a much slower affair over last year’s fastest edition, but resulted in a much harder race and enormous attrition. It was a true strongman’s race, and CSC rarely disappoints in these situations.

The 24th edition of the Philadelphia International Classic started hot and ended hotter. The racing was incredibly aggressive throughout – the day’s main break didn’t roll until about 50 miles in after innumerable attacks and counterattacks and bridges and chases and everything in between. 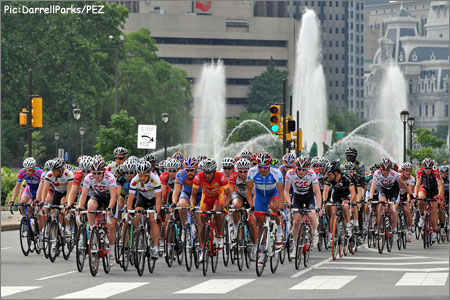 The ruin of the break today, however, was not so much a charging peloton, but the awful heat, which reared up and blew its hot, steamy breath all over the field and the escapees. The break began to lose impetus just over halfway through as Ben Kneller and Richard Geng fell to pieces on the Wall. 100 miles into the 156 mile walk of death, Brad White appeared to run into some difficulty on the Wall, as Bissell’s 2008 standout, Ted King, was dropped. They waited for him, but it was evident that the oppressive conditions were tearing the break apart. Still, they marched onward as the gap fell downward.

Inside two hours remaining, action started heating up in the field and the rocket launchers were pulled from the arsenal and riders were the ammunition being fired up Manayunk. The formation of a significant chase group signified the beginning of the business end of the race, but it was doomed. A solo move by Slipstream’s Magnus Backstedt saw Maggy across to the ailing break, but the field was clipping at his heels and it all came back together on the Wall with just over 40 miles to go.

Davide Frattini managed to hold off the hounds to take the final KOM on offer for the day’s break and with it the KOM award for the day. 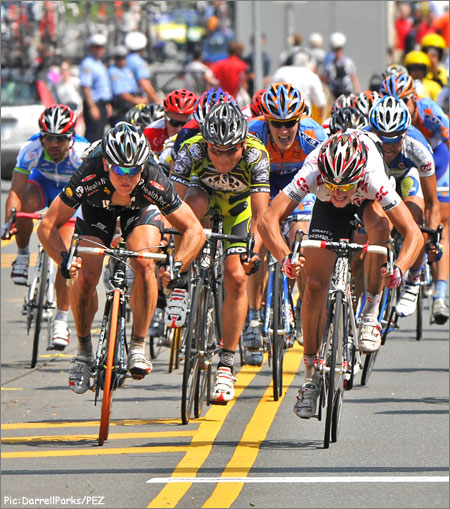 Behind, the field was readying for the finale and the attacks resumed with fresh fierceness, and with the constant catalyst from multiple firings from hopeful teams, the gap began to fall, drop, tumble, crumble, and wane.

As the race drove into the final three short circuits, the break was finally put to rest, except for 2007 UCI America Tour overall winner, Svein Tuft. Tuft had a wee bit left in his massive diesel tank and went for it alone, but to no avail. Again, the attacks were raining sweet drops of goodness from the baking roads of Philadelphia, but none of the mixtures were just right. The great bartender added new parts, took some out, mixed, shook, stirred, blended, but no combo could pull it off. 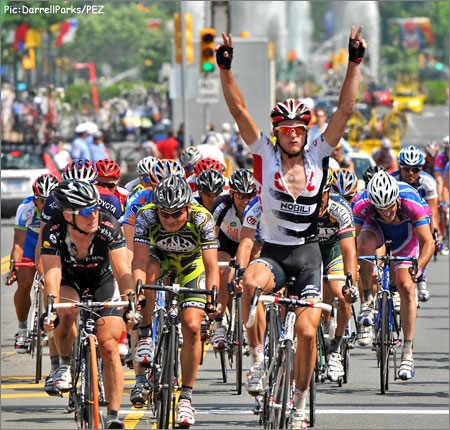 Coming into the final kilometer, there was a field sprint boiling in the teapot and the whistle was growing louder and louder as Matti Breschel emerged out of the tormented chaos for CSC’s second win in two years. Breschel just managed to edge out HealthNet’s Kirk O’Bee and Rock’s Fast Freddie. 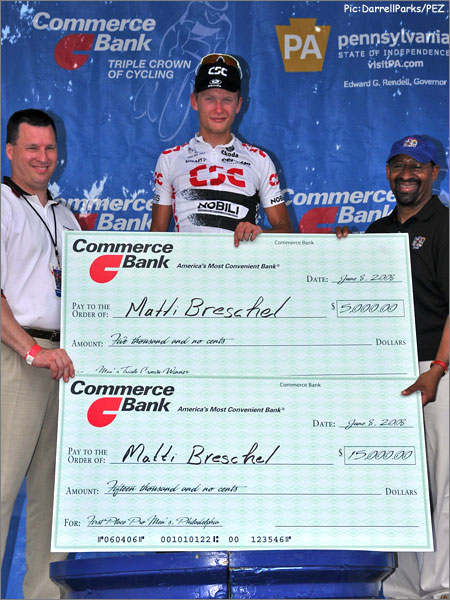 Of note: the domestic scene put on a proud showing in Philadelphia today – nine of the top fifteen were domestic racers this year, including two out of the three podium spots.