Paris-Roubaix is a race I’ve always wanted to see live, ever since I saw a mud splattered Sean Kelly on the pages of ‘Mirroir Du Cyclisme’ as a teenager, however it’s never been on the cards until my presence was requested on this top assignment from PEZ HQ.

It took me about 20 secs before I was arranging with my friends at GrupettoItalia to take the ultimate road trip for fans of all things cobbled. The plan was to get to the infamous Arenberg Forest early enough to allow us to soak up the atmosphere whilst also ensuring we could get out of the forest as soon as the race passed by to chase the race back up to Roubaix seeing it as often as possible.

On paper this seemed a simple plan with the cobbled sections zig-zagging along the French / Belgian Border. In reality we did just that – but with near on 50,000 crazed cycling fans also doing the same thing – we had a bit more company than expected.

So where do I begin, how do I put into words the madness that is The Hell of the North? Probably the best thing is to let the pictures do the talking and I’ll just try and make sense of what for me and my travel companions was one of the classiest, funniest, most exciting, atmospheric illustrations of why our sport produces such legendary races like the Queen of the Classics.

• 10.00am We got the right place, early Sunday morning, still just expecting a bike race – how wrong can you be.

• 10.30 The Beers are flowing as the entrance to the Arenberg begins to fill up with…. Blokes in wigs.

• 10.45 No exaggerating this little terrier just necked that beer behind him.

• 10.55 More fans arrived and the conga-line started led by a red monkey to drum & bass beat…

• 11.20 The Boonen Boys turned up and hijacked the stage from the local Arenberg Brass Band.

• 11.23 A bit of inside info from the most reliable source in Belgium cycling ‘Bert the Bookie’ reveals on the inside of his hand the exact top 10 finishers and their times, hours before they reach Roubaix. Who says Kermesses are fixed?

• 11.40 The Beers continued to flow and the race is still 4 hours away

• 12.45 The party began to drift onto the cobbled section and the lines were drawn under the old mine bridge that spans the Arenberg Forest, Belgium on the right and France on the Left. The Belgians managed to capture a Gilbert supporter in what was probably the best natured sporting rivalry we’d seen.

• 12.52 Sven & Jorg get in place, ready for every eventuality, should Spartacus require a wheel change on section 15. But they were very happy as CSCs car was drawn Number 8.

• 1.15 Freddy Maertens gate crashes the GrupettoItalia private lunch and asks if he can become a Daily Distraction.

• 2.45 Awesome- the noise that greeted the riders as they literally hit the cobbles is breathtaking, more beers anyone…

• 2.45 Back on the road we’ve got a race to chase, just like everyone else in Northern France. It’s not just us chasing Roubaix – we got company – thousands of fans are converging on the Velodrome

• 3.30 Quick stop on the side of the motorway scramble down the bank and “whoa” there’s a 9ft Farmer at the entrance to section 13 – too many Stella Artois, stop… The Gendarmes are coming, Allez allez!

• 4.15 Found it!!!! the final section of Pave has a walk of fame down the middle with all the greats set in stone – literally – and Kelly in my eyes was one of the stone hardest of hardmen. 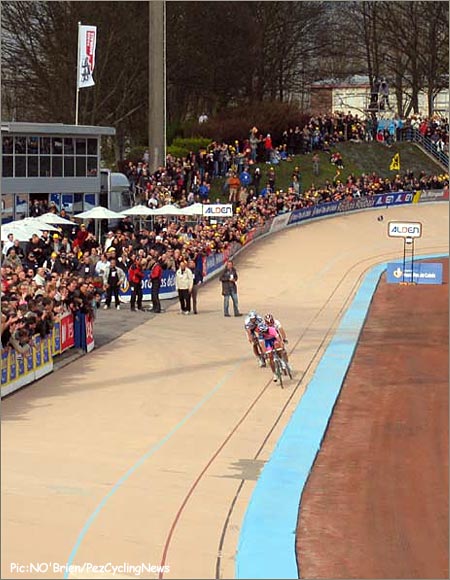 • The Legend moments after stepping off the podium.

• …and guess who got to hold Mr. Boonen’s winning bike, Luke managed to sweet talk the very happy Quickstep mechanics.

• It’s not just the bikes that struggle over the cobbles, Liquigas’ Pozzato crashed early and the team car was mullered on the final Pave stretch….

• Some more cobbles … now get Luke a beer – and book us in for some more Roubaix action next year.

To experience the real flavour of the Cycling monuments for yourself, visit www.GrupettoItalia.com.
Like PEZ? Why not subscribe to our weekly newsletter to receive updates and reminders on what's cool in road cycling?