Alejandro Valverde sealed his Dauphinй win on the weekend, adding more speculation to his prospects for the Tour. PEZ was on hand at the finish in Grenoble to witness just how quickly the proceedings were wrapped up after a week of exciting racing. 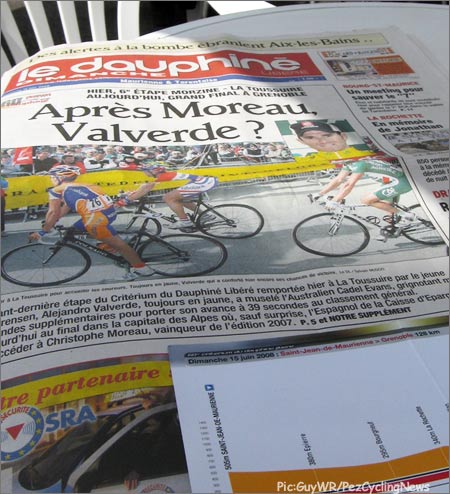 The Critйrium du Dauphinй Libйrй wrapped up on Sunday with the final stage of seven into Grenoble, home of the Dauphinй newspaper from which the race takes its name. Despite three rated climbs on the stage, with room for a change in the overall classification, Le Dauphinй itself had already called the race in favour of Alejandro Valverde, declaring him the patron of the peloton and already speculating what his strong performance in both the time trial and the mountains might mean for the Tour de France. 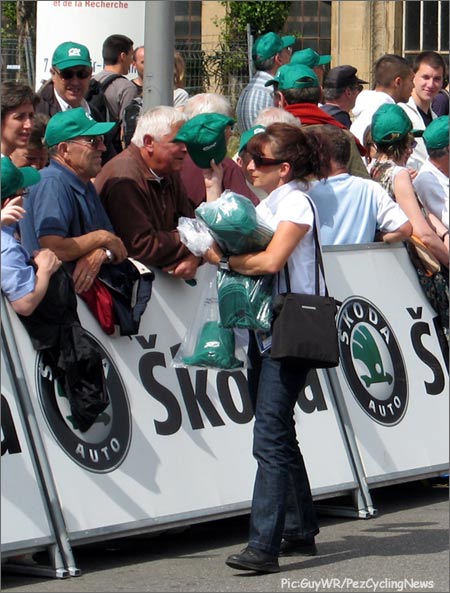 So while the main event was effectively over, the expectant crowd that was slowly gathering in front of the Hotel de Ville along one of Grenoble’s main streets in the early afternoon had definitely come to see some Pro Tour cycling action. PEZ arrived early, before the main crowds had gathered, hoping for a bit more excitement than was to be found in the rest of the city. 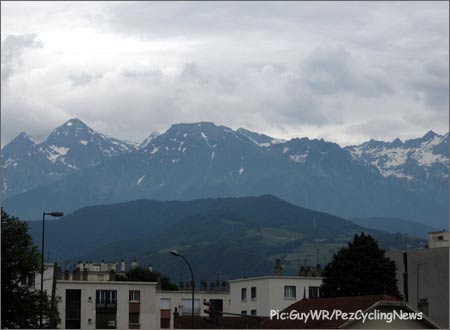 Grenoble may be surrounded by spectacular mountains, but on a Sunday afternoon there were few shops or even cafes open and plenty of deserted streets in what is the region’s largest city. No matter, a fairly important petanque tournament entertained us while the race crowds gathered. 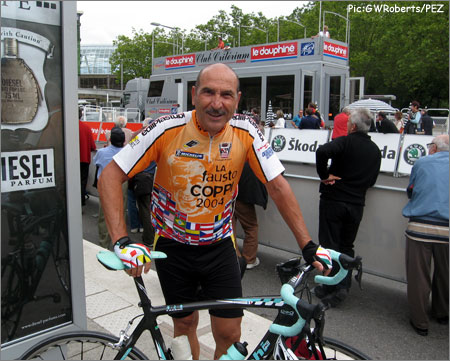 The last kilometre of the course was flat and straight, guaranteeing a good sprint. One lone cyclist seemed content to test it out early. We caught up with him later, an older gentleman in a very sharp Fausto Coppi jersey, clearly a fan of Italian cycling with his Bianchi ride. Jean-Francois called himself a ‘cyclo-tourist’ and said he’d put 62 kilometres into his legs pre-riding some of the course, with around 15 still to go back to his home in nearby Tulliens. 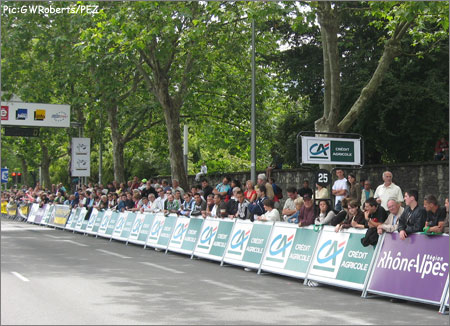 With two hours to go, more supporters were gathering to claim their places on the barriers. Le Dauphinй was running a hospitality suite right alongside the road, as were Credit Agricole and a regional cycling club – Les Rhone-Alpes – that had provisions in place for both young and old, as well as a group of junior riders who had also pre-ridden some of the course. Richard Virenque was also lurking, commentating for a local TV station, and looking a little older and greyer these days, although impossibly tanned for this time of year. 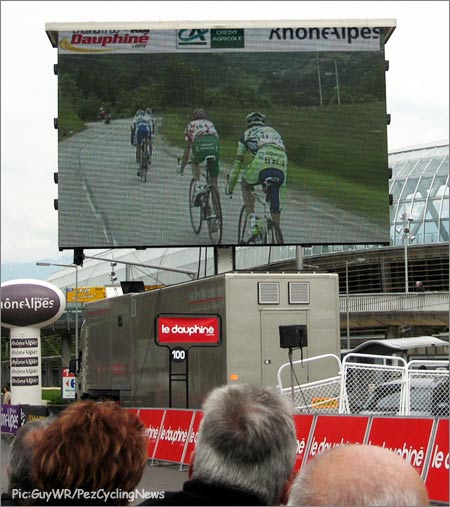 Counting down with 45 minutes to go, the growing crowd was catching the action on the big screen, seeing two breakaway groups try to hold off the peloton. The Dauphinй’s publicity caravan is hardly of Tour proportions, but the crowd was still hungry for trinkets. Credit Agricole has clearly taken a page out of the Champion supermarket chain’s book (which has the polka dot hats at the Tour) with its own hat giveaways, managing to kit out just about the entire finishing-straight crowd with its green caps.

PEZ got positioned in behind the press photographers just past the finishing straight. Soigneurs and team support crew hovered expectantly. The team buses were all parked right at the end of the barriers, with the bike trucks close by, and it seemed like everyone was keen to get this race over and done with, the bikes and riders all packed up, then head for home. 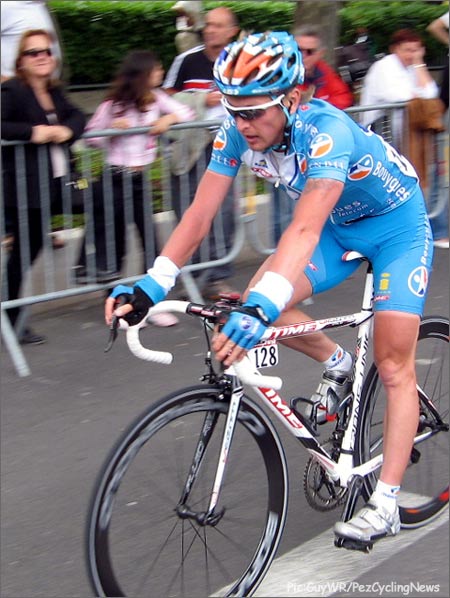 Trofimov rolls in moments after the finish.

After hours of waiting, the conclusion of the stage and the race seemed to flash by in a blur of activity. First the motorbikes roared in, parking quickly in a row, then the official cars, horns blaring, before the first of the riders. The breakaway had stuck, and Credit Agricole’s Kazakh (the only one in the race), Dmitriy Fofonov, just edged out the Russian from Bouygues Telecom, Yury Trofimov, who was going for his second stage win. Quick Step put Jurgen Van De Walle into third. 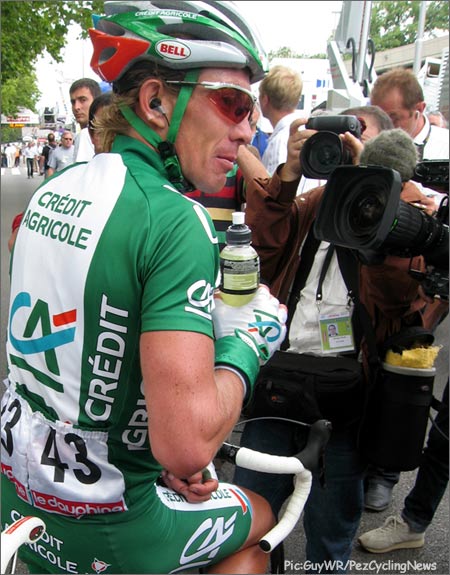 While Fofonov bathed in the attentions of the press, the rest of the peloton were streaming in. Valverde rode in with Cadel Evans, patting him on the back, perhaps suggesting that while Evans had ridden strongly in the mountains, he would need to be stronger come July. Levi Leipheimer was also in the group, placing third in a race that might have been his to win, but it was clear that Valverde was only interested in talking to Evans for now. 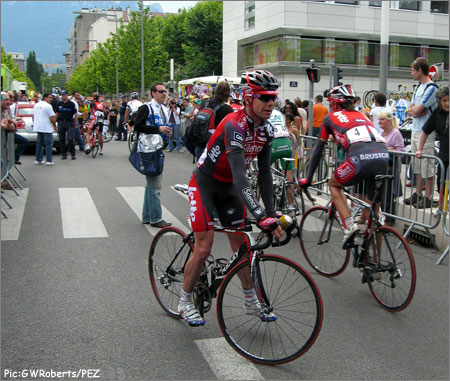 Caisse and Astana had their crews quickly attend to Valverde and Leipheimer, guiding them back to the doping control caravan and to the podium for the presentations. Evans looked a little lost for a few minutes, looking for his support, while our diarist Dario Cioni left him to it and headed straight for the team bus. 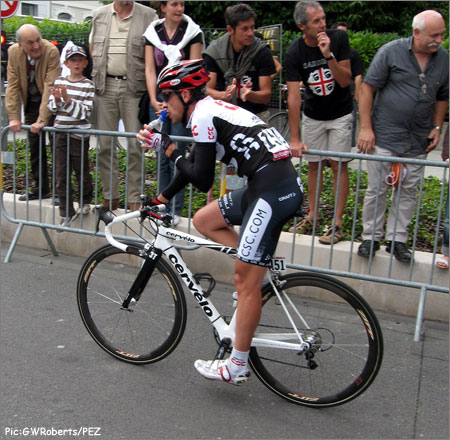 As Evans finally headed back to the official area, PEZ almost missed Carlos Sastre as he rolled in. He was nearly invisible during the race and even the spectators nearby barely saw him. With the Schleck brothers on the team come July, Sastre will be surely looking to do more at the Tour. 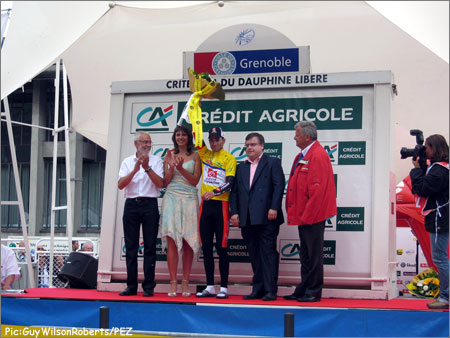 The podium presentations were up and running only 10 minutes or so after the winners had come in, with many riders still finishing the stage and having to navigate their way around the assembled press photographers with the podium stage right next to the finish line. 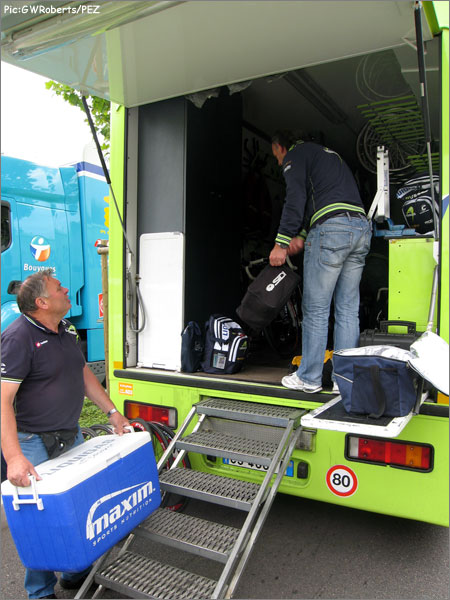 While this was taking place, the mechanics and team staff were frantically packing up. Bikes were being washed, cleaned and disassembled – if you don’t like a crowd watching you when you’re working on your bike, don’t become a Pro Tour team mechanic. 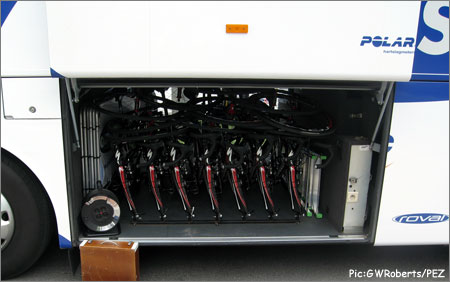 Other staff were assembling suitcases for the riders and dumping out unused water bottles. Fofonov’s stage win bouquet soon became part of the luggage rack outside the Credit Agricole bus. 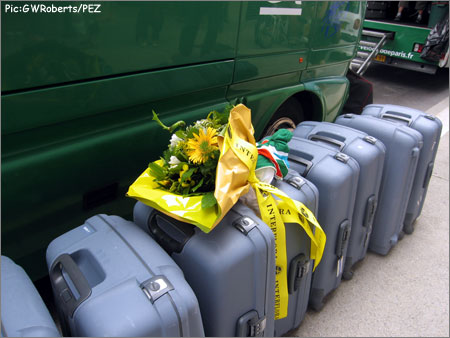 For the riders not on the podium, all had retreated quickly to their coaches. The Euskatel boys strolled back from the podium looking relaxed and contented, having claimed the overall team prize for the race. Their orange kit is always eye-catching, and Sammy Sanchez even sported a pair of matching Crocs sandals in keeping with the team’s colours. 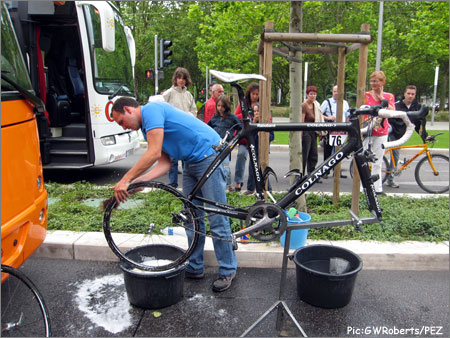 With the teams keen to get underway, PEZ was as well, with some black clouds starting to gather over Grenoble’s mountains. The Dauphinй is certainly nothing like the Tour in terms of the size of organization or the crowds. The finish has the feeling of a well-managed machine, churning out Pro Tour prizes and a dash of glory for those who rode well enough to grab it. After seven days of exciting racing, everyone seemed ready to call it a day and finish the 60th edition of the race. 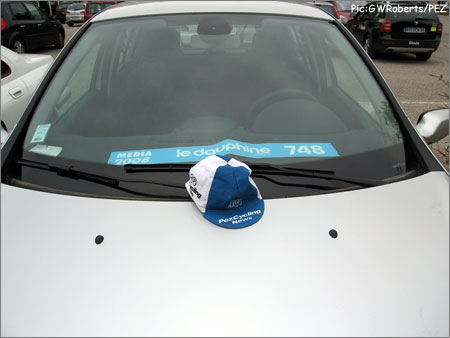 But there were some nice touches as well. In the carpark as PEZ got ready to get leave, Credit Agricole rider Patrice Halgand’s official fan club was packing up their gear into a little Citroen and we thought we caught a glimpse of the rider himself, perhaps hoping for a ride home free from team responsibilities. It might be the Pro Tour, but the Dauphinй can sure feel like a little local race at times.