Another cracking Classic and another milestone in the career of a prolific young star. Without a major Classics win for what Belgium regarded as an aeon, Tom Boonen is back in his rightful place – the big-time – with a thunderous triumph in the Queen of them all.

Boonen had too much smarts and, well, WAY too much power for ‘Spartacus’ Cancellara and Ale’ Ballan after their three-up 35km breakaway. Once again, QuickStep were the most tactically astute bunch when it counted, with Boonen always aware of what was going on, backed up by Stijn Devolder his impressive Belgian Champion, Ronde winning teammate. 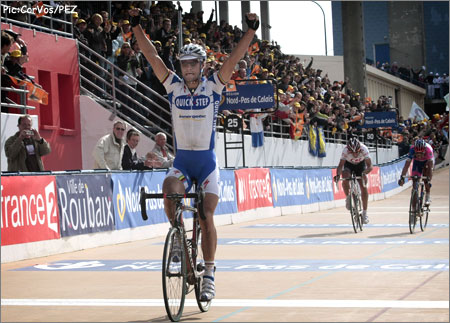 Boonen THUMPED his breakmates in the sprint.

Boonen had Cancellara’s card marked and locked himself onto the back wheel as his big rival jumped clear heading into sector 7, at Templeuve l’Epinette. Ballan saw the danger, as if watching highlights on a DVD box set, before realising it was the real deal and he needed to be there too – it took a bit more of an effort to haul himself over. 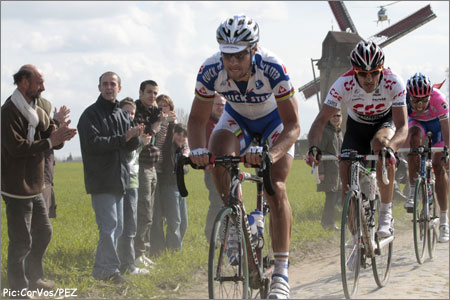 With O’Grady sitting in behind to protect Cancellara, the same with Devolder, the lead ripped open and no one was coming back. It was going to be a three-way fire fight for the glory. Without seeming to be going full gas, the lead stretched out further with every bump and corner. 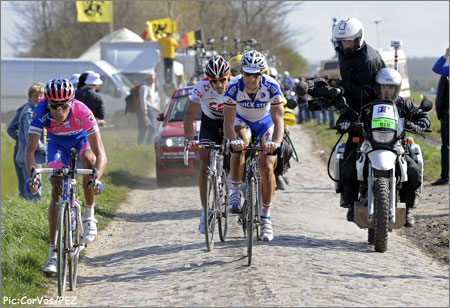 Smashing their way through the Carrefour de l’Arbre, Cancellara had a go at escaping. He gapped Ballan but Boonen pulled it all back together. It seemed that Boonen had psyched out the other two – they knew they needed something magical to break him but it never came. 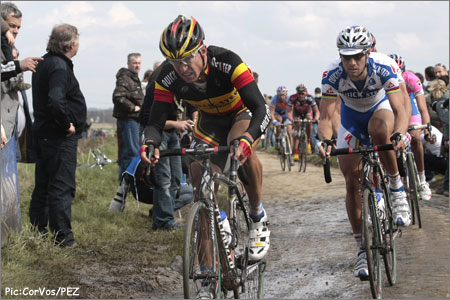 Last week, Devolder got his day of glory, and this week it was Boonen. Not a bad team those QuickStep boys, eh?

5kms from home, Boonen is adjusting his earpiece, Cancellara is looking nervous, and Ballan is soft pedalling a little, thinking how the hell will I outsprint Tommy or go with Fabian? They all continued working with no mucking about – a sure sign of respect, and we’re into the last sector of pave! 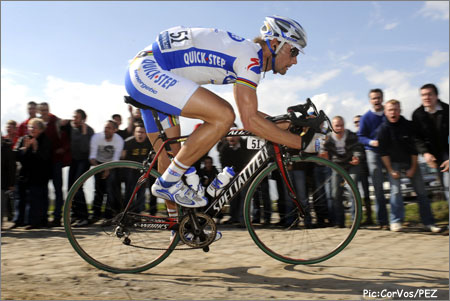 Boonen was magnificent today. That’s about all there is to say.

The Three Musketeers Boonen (winner in 2005), Cancellara (winner in 20006) and Ballan (Flanders king last year) entered Roubaix velodrome together … but once Tommy B decided to smash the pedals down in serious anger the result was obvious. 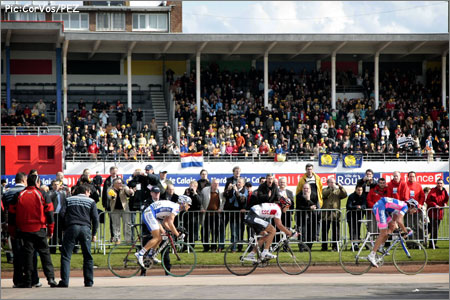 Ballan led it out like a motorbike, keirin-style, and then Boonen came around up top and nobody could do a damn thing about it.

Launching round the top bend with 200 metres left, Ballan and Cancellara were absolutely toasted by the speed and power of the QuickStep ace. And Patrick Lefevre will have another ruined suit to replace as he hugs a Classics winner for the second week in a row. 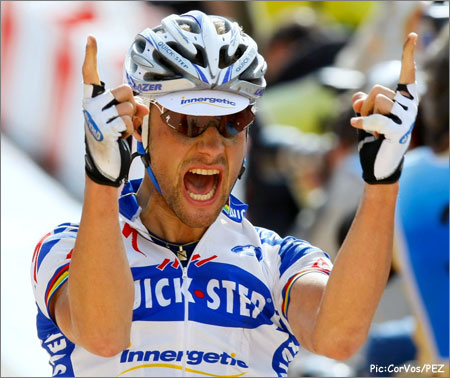 It was a little like the good old days – arguably the three top Spring Classics riders in the sport today going pull-for-pull at the front. A mostly dry, sunny day, with the fans as numerous as they’ve ever been. Who says pro cycling is dead in the water?

It took a while for things to warm up this morning, racing wise, with no one in too much of a mood to break out of the peloton. First guys to succeed in cutting the umbilical cord to enter the grim and cobbled world were Jan Kuyckx, Alex Serov and Matthe Pronk. They managed to get 6 minutes before the favourites started to up the tempo. 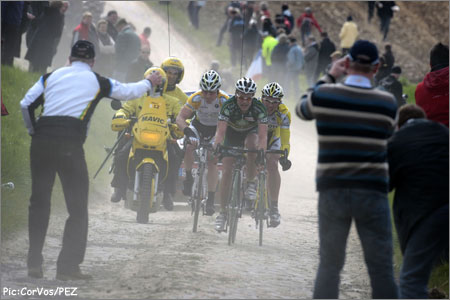 Pronk found himself on his own once the break went into meltdown – the main guys had turned up the gas after a tumble put Pozzato and Flecha in trouble. Their race was essentially done with 60 kms remaining as they both made major efforts to reach the front again. 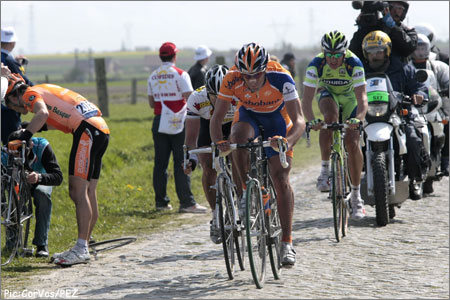 Flecha’s race was essentially over with 60k to go. Flats put paid to Hincapie’s chances as well.

Jonathan Vaughters will be a very happy man after Martijn Maaskant justifies (yet again) the Slipstream team’s invite to the ASO party with a super 4th place, at just 24 years of age. 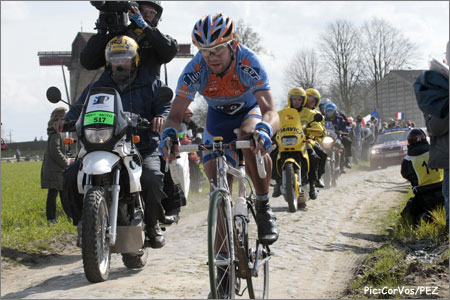 Chappeau to Martijn Maaskant and a huge 4th Place. 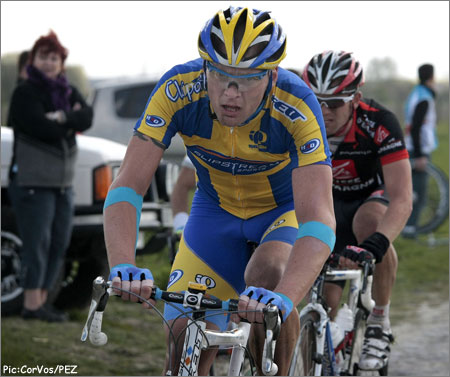 Magnus couldn’t add win #2 to his palmares today, but his Slipstream boys were once again fantastic.

A major shout out to Fabio Baldato who, at the age of something like 78, brings his career to a close with a top 10 in his most beloved race. OK, that was flippant … I’ve got a few years before I hit 40, but I’m never going to burn up the cobbles like the Fab-ster, so well done and I hope the party tonight is a good one. 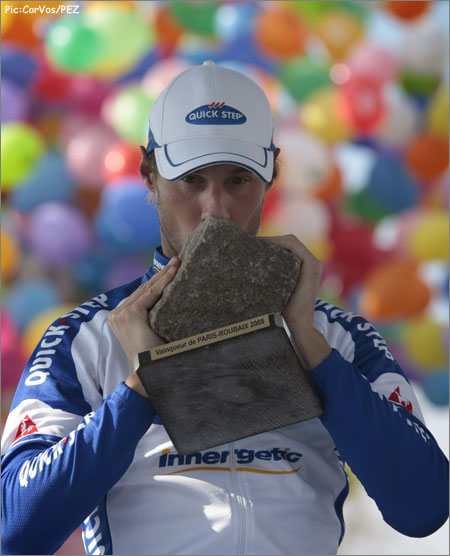 Stay tuned to PEZ for all the reaction from trackside and roadside. Eurotrash will update you on everything tomorrow, and our boy Nick rolled over the Channel to check things out in the field. Don’t touch that dial!

Roubaix History: From Queen To Hell… And Back