Roubaix History: From Queen To Hell… And Back

To fully appreciate the beauty and pain that is Paris-Roubaix, one must understand how this race was born, and the battles that shaped her into the Queen she is today… No true racer would be satisfied with only a view to the upcoming race-day – no way no how!

On Easter Sunday, April 19 of 1896, 100 competitors leave Paris at 5.30 in the morning for a 280 km race to Roubaix. Very early in the race Arthur Linton takes off followed by 6 other competitors. Then comes the hour of Germany’s Joseph Fischer. He catches up with Linton, and goes solo for the last 100 km, after Linton had hit a dog crossing the road. He wins after more than 9 hours of racing (average: 30,162 km/h). Charles Meyer (Denmark) finishes second, the future Tour winner Maurice Garin third. Garin will come back and win in 1897. 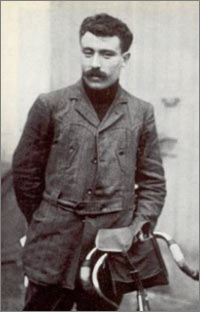 1909: First victory of OCTAVE LAPIZE
Twenty-two year old Octave Lapize starts as an independent, he therefore cannot count on any support or help during the race. But he is strong, and 4 punctured tires and the loss of a lot of time cannot stop him. Three leaders prepare the final sprint in Roubaix. Louis Trousselier takes the lead, but slightly slips in the last curve. Lapize places his final jump and wins, beating Trousselier and Jules Masselis. Lapize will also win in 1910 and 1911. A fighter pilot in the French army, Octave Lapize died in 1915, when his plane was shot down over Verdun. 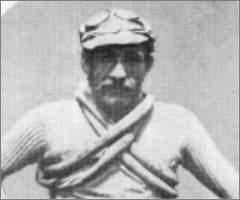 1912: Local hero CHARLES CRUPELANDT
February 18, 1955 a man dies in deepest poverty. This man – 68 years old, blind and amputated of both legs – is Charles Crupelandt, born in Roubaix and one of the heroes of the very early years of cycling competition. Few people remembered the courageous Charles, who put so much happiness in the hearts of all common people in and around Roubaix by winning the 1912 edition, beating Gustave Garrigou (the 1911 Tour winner) in a two men sprint. Between 1910 and 1914, Crupelandt showed that he was part of this bunch of tough cycling pioneers, not afraid of any challenge. Four stages in the Tour, Paris-Tours 1913, again Paris-Roubaix and the French national road championship in 1914: Charles Crupelandt merits to be remembered. A few years ago, the town of Roubaix built a short symbolic section of cobblestones, just a few hundred meters away from the entrance of the velodrome. It is called “Espace Crupelandt”. 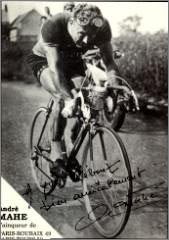 1949: Major confusion: COPPI? MAHE?
No, it was not Fausto who was the fastest of the lot. It was Serse Coppi, his brother, who won the sprint of the leading peloton. Though he passed the finish line first, he was not declared the winner. The officials gave the victory flowers to Andrй Mahй, who was leading a group of three (including Moujica and Leenen) that arrived first on the last straight, but was wrongly directed by a race official. By the time they realised, the pursuit group had already finished.

Mahй was nevertheless declared the winner, but – after an official protest – Serse Coppi was put ex-aequo with Andrй Mahй, thus winning his one and only classic race. The sequels of a fall in the 1951 Tour of Piemont will put an end to Serse’s life. 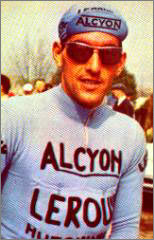 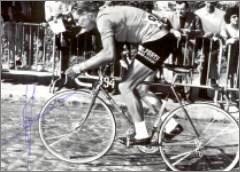 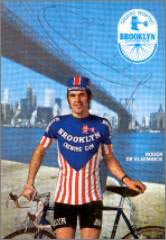