Race Report: So, the Tour de France is over, what next? Today it’s the Clбsica San Sebastiбn in the North of Spain, a nice warm up for some of the riders who will be jetting off to Beijing for the Olympic Road Race next week. Tour Champ; Carlos Sastre will be joined by last year’s winner, Leonardo Bertagnolli, along with Contador, Valverde, Evans, Cunego, and reigning Olympic and World Champ Paolo Bettini: there are a load of top riders ready to battle it out in the Basque Country.

The Course Profile
The Clбsica San Sebastiбn takes in some beautiful countryside and coastal areas, the riders won’t get much of a chance to take any of it in as the course does lend its self to sight seeing! First at 20 km there is the Alto De Orio-Zudugarai (3rd cat), then at 30 km the Alto de Garate (2nd cat) and the Alto de Azkarate (2nd cat) at 65 km. 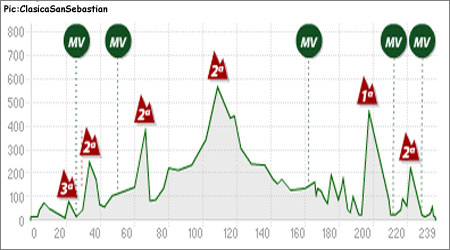 The second category Alto de Udana starts at 85 km and takes the riders to the highest point of the day. The Alto de Jaizkibel is the most feared of the day’s climbs and this is where the men of action will show their stuff. From there they have to tackle the Alto de Arkale 16 km before the finish back down in San Sebastiбn. 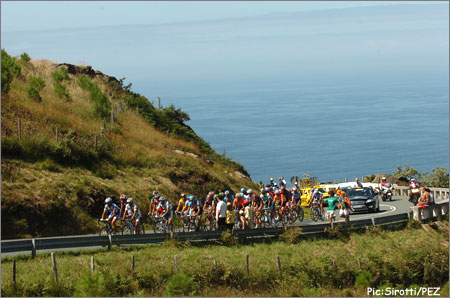 The Action
I eventually dragged myself away from the Woman’s Beach Volleyball on Eurosport to find the usual great coverage on Spanish TV. The Quick-Step team was working hard for Paolo Bettini with Carlos Barredo leading a sizeable group over the Alto de Udana and towards the Jaizkibel. 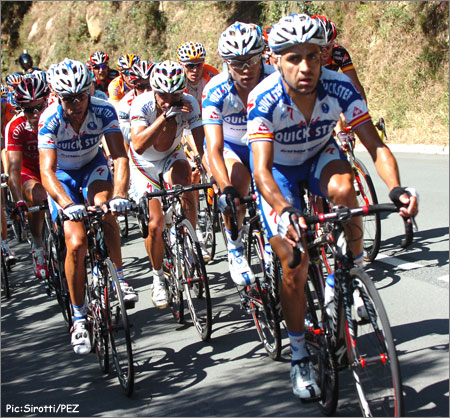 Down from the Jaizkibel it was a big group of just over 30 riders that were heading towards the last climb of the Arkale. Most of the favorites were there, Valverde, Bettini, Rebellin, Sanchez, Menchov, Moncoutie and Contador. Quick Step were still in control with three men to the fore followed by little Bettini. Liquigas had four riders that were quite happy to sit in the group now being towed by Juan Manuel Gбrate. 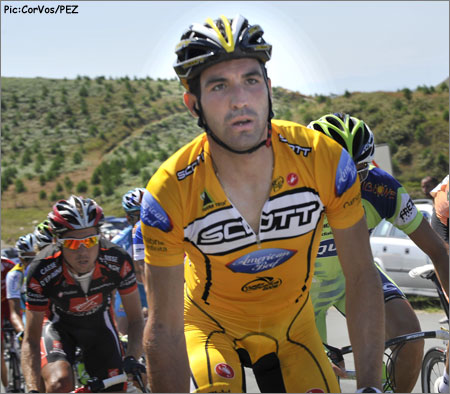 Scott-American Beef…that was a quick turnaround on those kits. I’ve been on teams where it took us till midseason before we got our kits.

Newish team, Scott-American Beef has not changed its mostly yellow jersey much and had David De La Fuente in the group.

The Arkale
Columbia rider, Kanstantsin Siutsou attacked at the base of the climb ending the race for the hard working Barredo who shot out the back. He was soon shown how to do it by a very fast moving Bettini who passed him on the big ring, jersey fully open and flapping in the wind. Contador was not ready for the change in pace and was suffering at the back of the group, but then he hasn’t raced since he won the Giro.

Next to try his strength was Alejandro Valverde (Caisse d’Epargne) who split the group at the hardest point, which is 7%; this put him, Bettini (Quick Step), Rebellin (Gerolsteiner) and Sammy Sanchez (Euskaltel) in the lead down the other side of the Arkale and towards the beach finish in San Sebastiбn in 12 kilometers. 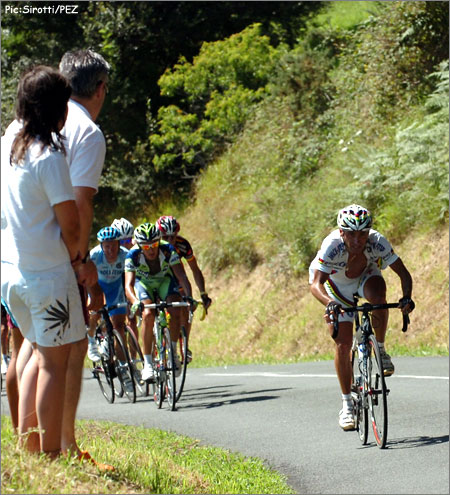 Also in the group was Moncoutie (Cofidis) making it five strongmen for the finale, they had 12 seconds on their chasers at 8 kilometers out. The leader’s problem was that the road into San Sebastiбn is mostly straight dual carriageway and the greyhounds could see the hare! Six riders were on their heels as they entered the port area, this launched Rebellin and Moncoutie off the front under the 5 km to go banner. 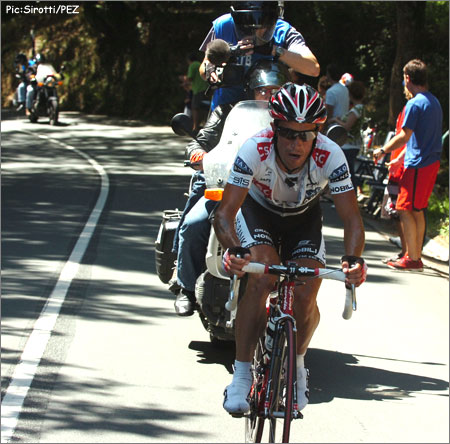 CSC’s Alexandre Kolobnev was impressive on the day – finishing on the podium. Can he pull another surprise as he did at last year’s World Championship, but this time in Beijing?

Not for long as Caisse d’Epargne now had three riders in the group and they soon pulled the Italian/French duo back. We now had a leading group of ten and it was the Russians who wanted to split things up, first Menchov (Rabobank) and then Popovych (Silence-Lotto) attacked; Popovych took the very keen Rebellin with him. This lasted for around a kilometer and as they thundered down to the beach it was Moncoutie who didn’t want to be left out of the results and went for a long one (1 km), but Valverde was having none of it and was soon on to him and without a side glance was past him and fighting off Bettini and Alexandr Kolobnev (CSC-Saxo) for the win. 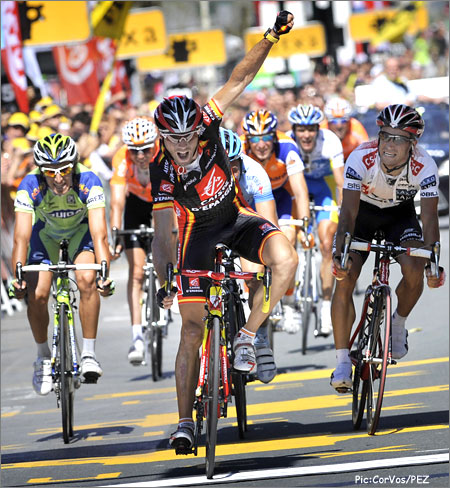 It looked a wild sprint, but in the end Alejandro Valverde had it in the bag, if this is a guide to the Olympic road race then Valverde and Bettini have timed their form perfectly and both should be fighting it out again next week in China. 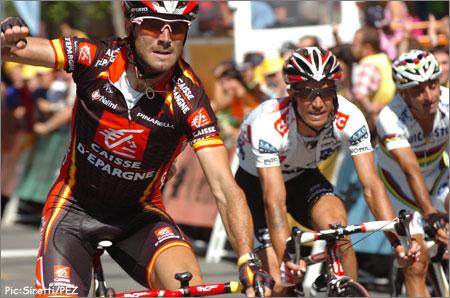 Valverde was satisfied, Kolobnev happy to be done, and Bettini…well, can he beat Valverde in a head to head sprint?

At the finish Valverde had the usual stuff to say “for me it was a very important win and the team was great, I’m not too tired after the Tour de France, I’ve been home for a week taking it easy, I leave for Beijing tomorrow.” 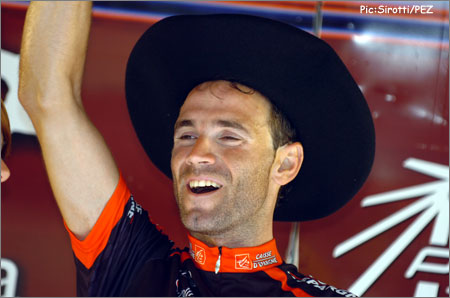 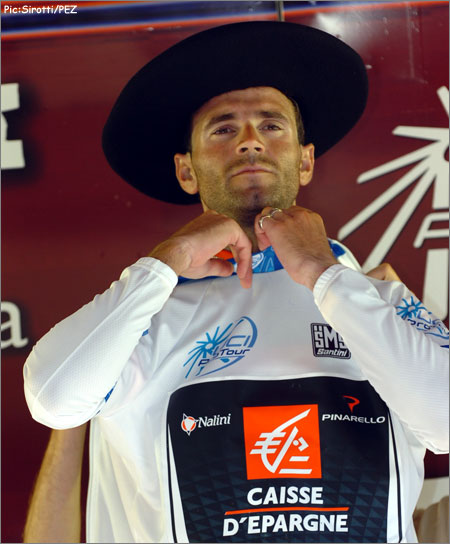 …and then got the ProTour leader’s jersey as well.