What a beautiful day for a 300km ride across Italy, and what a beautiful way to take a solo win in La Classicissima. All the headlines and plaudits go to Fabian Cancellara – an awesome performance of style, control, power and panache sees the world’s time-trial king add Milano – San Remo to his palmares.

Cancellara and his CSC boys were on top of nearly everything that moved, and proved that being in the right place at the right time is more than just luck. The only move they missed, when an elite group blitzkrieged their way clear on the Cipressa was shut down after a hellish chase. 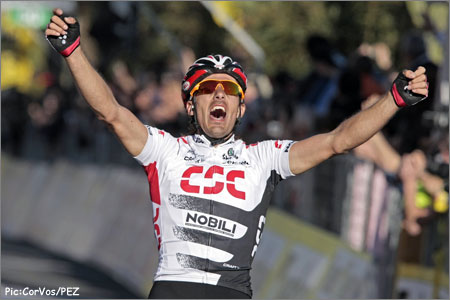 We speculated long and hard about what difference the new finishing layout would make, skipping the Via Roma, and adding a couple of extra kilometers. Would it mean an easier job for the sprinters to sweep up any breakaway?

Not if Cancellara is the guy you’re trying to catch. The way he thundered away from the front when everyone else was deep in the red zone was stunning, and once he had 3 or 4 seconds, it was in the bag.

Previously, in Milan – San Remo …
Of course, someone has to make the early running on a day this long. There’s always an order in the team meeting for riders to go out on the attack. Depending on whether you’re a glass half-full of half-empty type of person, the quartet who drew the long/short straw comprised America’s own Will Frischkorn (Slipstream), Raivis Belohvosiks (Saunier-Duval), Filippo Savini (CSF Navigare) and Miche’s Nicola D’ Andrea.

The peloton looked the other way as they flew up the road after 50kms, opening a huge gap – in just 27kms of riding, they were over 16 minutes clear! And that with the peloton ticking over at a cosy 43 kms/h. It would be a leg-screaming, mind-freezing 200 kms before they saw another rider again. Impressive stuff to stay clear that long, and another high-profile day off the front for Slipstream – nice work, Mr Frischkorn! 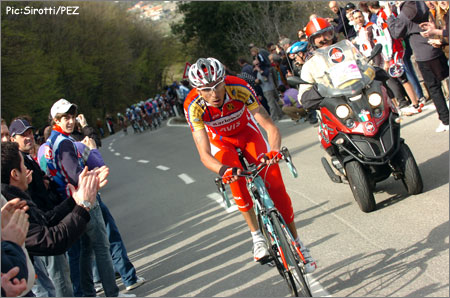 So many, many attacks dotted the nearly 200 mile route – even Tour KOM champ, Mauricio Soler, got his attack on.

Picking things up …
40kms from home, and we’re flying up the Capo Berta – Bernard Kohl is off the front of the peloton trying to make things hard – he was succeeding because off the back went QuickStep sprinter Gert Steegmans.

Hurtling towards the Cipressa, Liquigas were to the fore keeping things tight for former champ Pippo Pozzato, while LPR were driving hard for Danilo Di Luca.

All the sprinters’ teams were floating around at the business end of the peloton – Rabobank and Highroad suddenly appeared, as they had sprinters in with a big chance. 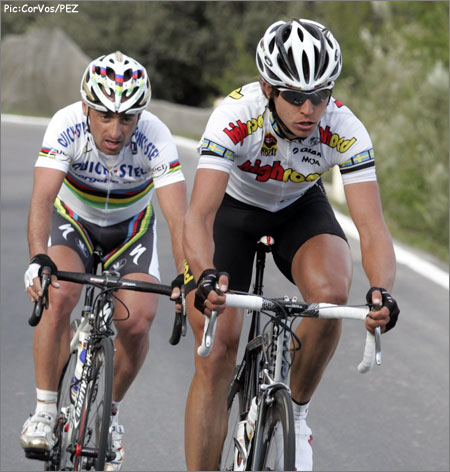 Time to get cooking!
However, the man who stuck the pan on the gas and turned up the heat was Paolo Bettini, launching at the bottom of the Cipressa, with the leading duo just 15 seconds ahead. Il Grillo went up to, and away from, Frischkorn and Belohvosiks – D’Andrea and Savini having evaporated. Trailing the double world champ was young Thomas Lovkvist, fresh off a podium place at Paris-Nice. 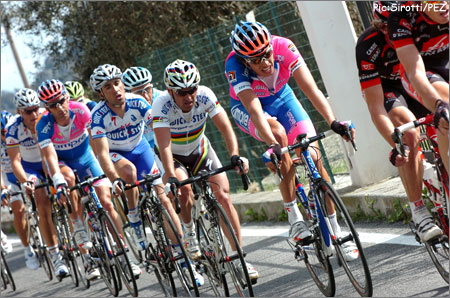 There was much suffering in the bunch today.

Now, Paolo looks a tiny bit rounder of belly than he has done previously, but Ivan Gutierrez was having nightmares in failing to get on terms! Davide Rebellin lifted the pace and a moment’s inattention saw Carlos Barredo tangle with an Euskaltel rider, taking out the luckless Frank Schleck.

Rebellin got up to Bettini and Lovkvist with Niklas Axelsson, fresh off a storming Tirreno-Adriatico, along for company. Howling off the Cipressa, it’s ……………. yep, Paolo Savoldelli, in a fine piece of ad-busting. How can you have LPR Brakes as a sponsor when you descend like a mofo? 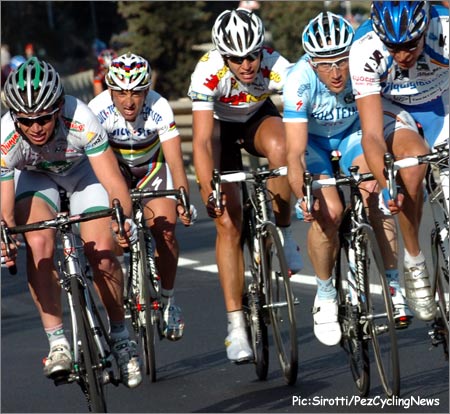 Fast Company: Il Falco leads the break off the Cipressa.

The field was in tatters approaching the bottom of the Poggio, a fast-twitch of sprinters skittering around in the wasteland between the Bettini group and the remains of the peloton towed by a panicked Liquigas and CSC who’d missed the move. 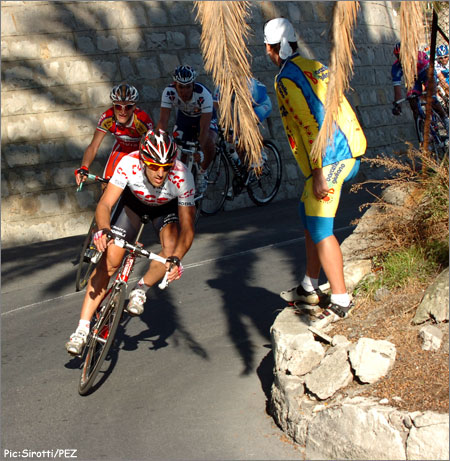 Onto the Poggio…
The fairytale was all over at the bottom of the Poggio as the peloton swept up our heroes. First to jump on the Poggio was Alessandro Bertolini of Diquigiovanni – the man who did such an awesome job for Bettini in last year’s Worlds.

Heading for the top of the Poggio, it’s a firestorm of attacks with Gasparotto and Rebellin and Ballan…then Gilbert goes away on to the descent, 6kms to go! Cancellara catches him and a string of about 15 guys coast round a sweeping right-hander, stretched out like lucky charms on bracelet. 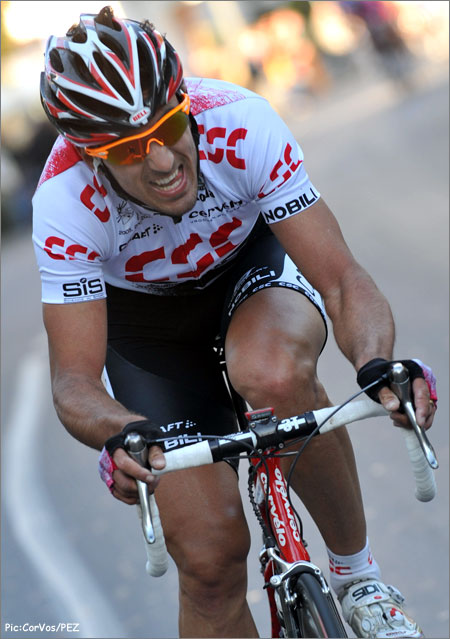 As things flatten out off the bottom of the Poggio, it’s Bertolini, Rebellin and Pellizotti trying hard but Cancellara pulls it back together. ‘Spartacus’ is looking amazing – he cruises up to Inigo Landaluze ….. and simply rides away. 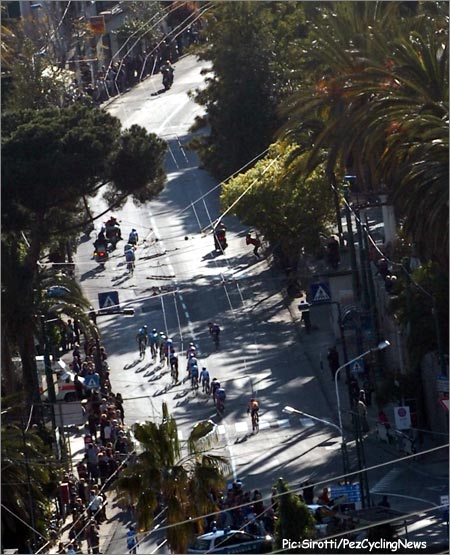 Under the red kite, he’s all alone and there ain’t no-one coming back as he sashays through the the final couple of bends, into the finishing straight and sits up with 75 metres to go, letting rip a volley of punches to the heavens. 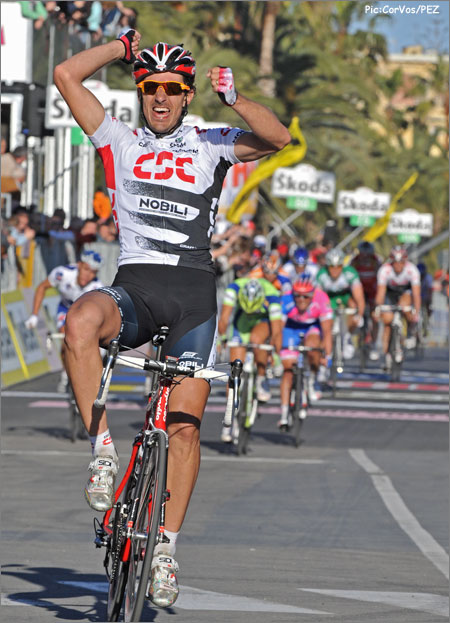 Pippo Pozzato led home the remains of the elite field in the sprint for second.

Blistering stuff, and once again, Milano-San Remo proves the finest show in town. If Cancellara turns up in Roubaix and Flanders with 80% of this form, it’ll be a long, sore day in hell for everyone else! 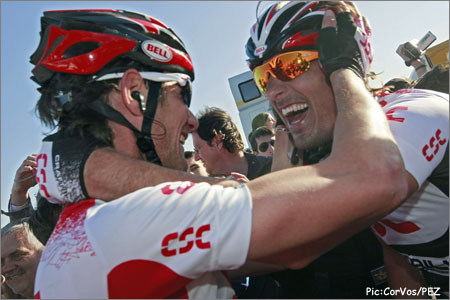 Thanks for keeping it PEZ, as we give a nudge, wink and pat on the back to our buddies at Cycling TV for their help.

PEZ-man Ed is in the Saunier team car, so stay tuned for the feedback, the highlights, the low-down and all manner of mayhem!