“Yeah, I’m happy to have won, but I’m not happy at having to go back to Yorkshire again – I just came from there, last night! And I’m sick of eating pies!” The words of Plowman Craven professional Evan Oliphant after defending the Scottish road race title on a deceptively tough course over 81 miles of the beautiful rolling Borders country around historic Hawick. 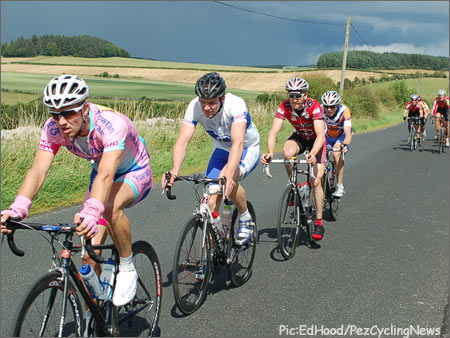 In spite of dark skies, the rain held off.

Oliphant kept his пїЅpowder dryпїЅ (copyright Dave Duffield) until late in the day and was just too quick for Pedal Power’s Gary Hand – the only man who could live with the Sea Otter winner when things got really serious, half way around the last lap. 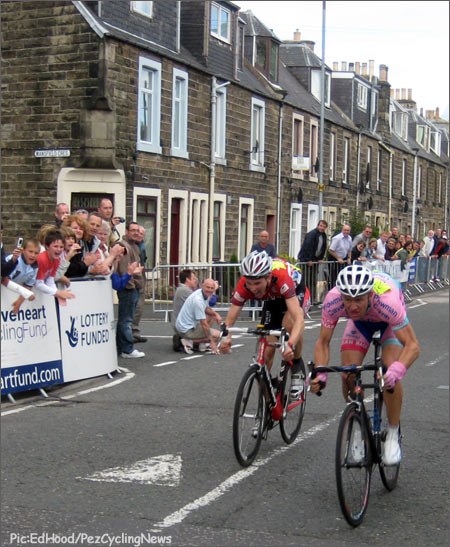 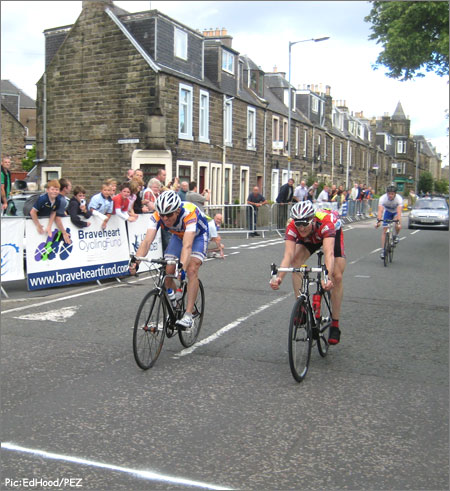 Oliphant really had to win, he’s a full time professional in a predominantly amateur field, damned with faint praise if he wins and eternally damned if he doesn’t. But his win was business-like and with no caveats, as silver medallist Hand said; “Evan did more than enough work coming into the finish, no complaints.” 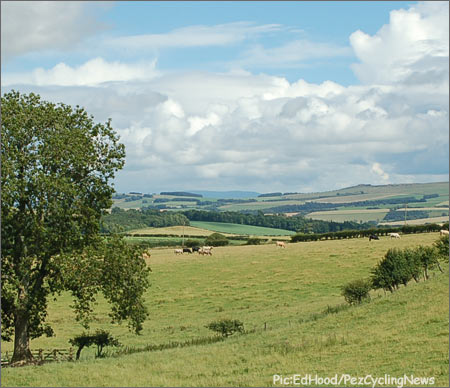 If the organisers had cared to, all that would have been required to choose the winner before the race would have been to look at the rider’s legs – Oliphant’s tanned, sculpted calves, etched veins and slab-like thighs would have won, hands down before a pedal was turned!

The monsoon which had fallen for much of the morning had eased, by the time the 54 starters from 60 entries began to roll out of Hawick. The Border’s town’s glory days – when fast flowing upland rivers powered fabric mills – are behind it, but the river alongside the start was certainly flowing wide and deep enough. 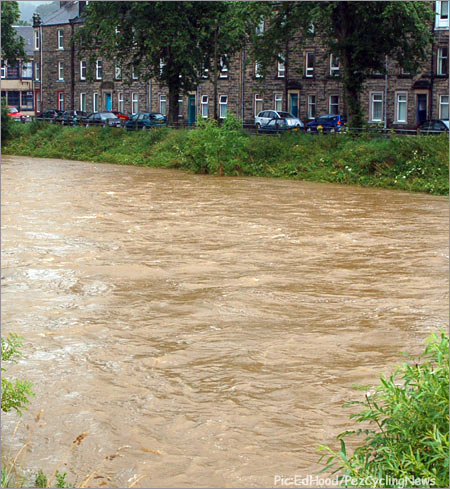 The circuit was a compressed loop, out – wind assisted – on the smooth main road along the valley floor then back into the strengthening wind on the spine of a ridge. Off the main road, there were technical sections aplenty with snaps, corners, bad surfaces, tricky descents and a long drag which didn’t look hard – until the final couple of ascents of nine.

It was this drag which defined the race and where Hand and Macrae played the ‘one-two’ game with Oliphant on the last lap. Oliphant responded to every jump and when he put in his own jump after countering a move by Hand, the race was as good as over. The three behind didn’t have the strength or will to respond, albeit Macrae tried to get across to his team mate. However, the look on his face told the story of legs that couldn’t handle what the head was telling them to do. 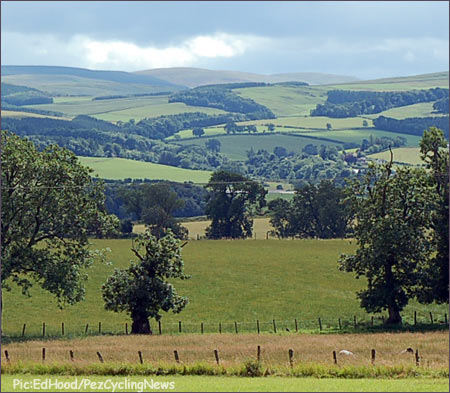 Kermode was among a break of six which went clear on lap two but was reeled in by lap four. The next four laps saw a race which ebbed and flowed but didn’t take on a decisive shape. 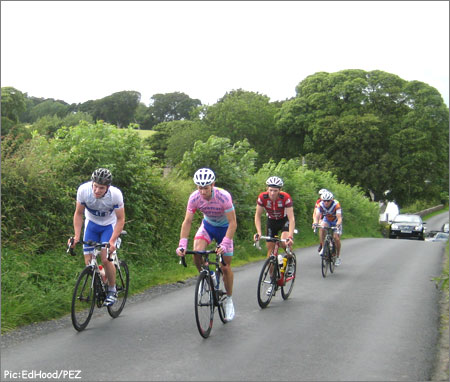 The winning break hauls itself over another highland hill.

It wasn’t until the penultimate lap that the definitive group formed; this time there was no chase, just groups of riders battling to the finish – the wind and technical, unforgiving nature of the circuit having done it’s job to perfection.

We grabbed the medallists before they could escape to the luxury of the showers. 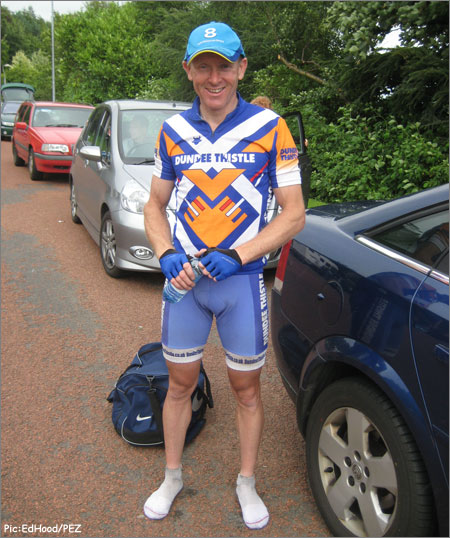 пїЅ John Kermode: “It was a good race, I was in the early break, but there were still too many good riders back in the bunch. The middle part of the race saw groups coming and going and I’m just glad I found myself in the right move. On the last lap, when the Pedal Powers were attacking, one-two, I didn’t have the legs to go with them, so I’m happy to get the medal.” 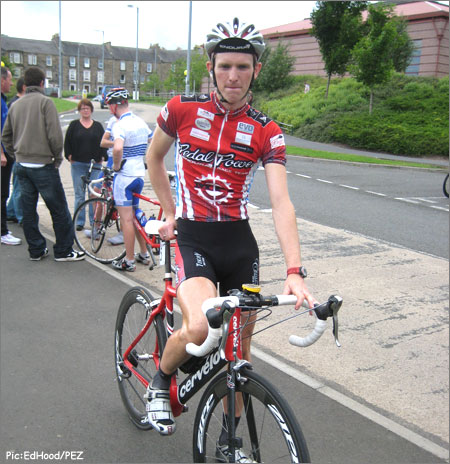 пїЅ Gary Hand: “I’m pleased to get a medal, but we came here to win. Despite us having different combinations in the break, Evan was always there and too strong. In the final break we kept putting in ‘digs’ to try and get the others to work, eventually they got the message and began to go through.

It was our goal today to arrive at the finish without Evan, but like I said, he was too strong. With 500 to go I thought that maybe I could get him, but he judged it perfectly.” 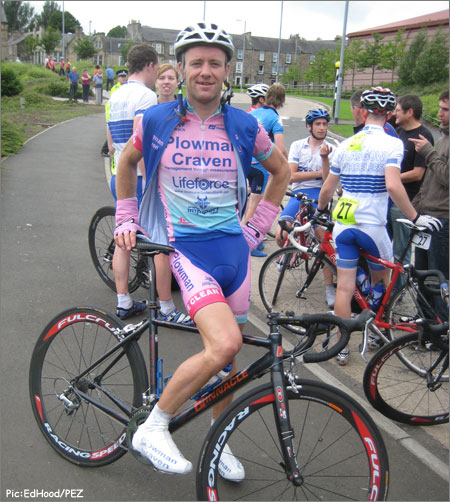 пїЅ Evan: “I knew that early moves weren’t going to succeed and there was a lot of coming and going of moves. I didn’t panic because I knew that I could make up 45 seconds on that hill. I was trying to wait on my team mate, James McCallum to get up to me, but the Pedal Powers were jumping around a lot and I had to cover them.

When I was away with Gary at the death he wasn’t doing much work, but I was confident I would win.” 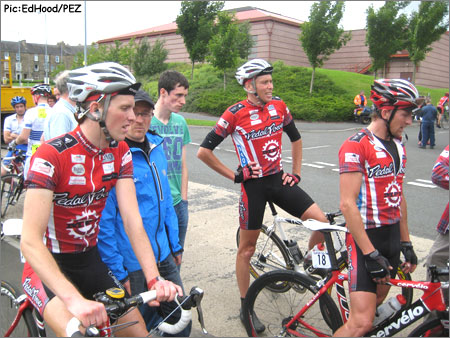 Yorkshire, and the pies? “James and I were riding the British criterium championships, in Hull last night. We were working hard for our team mate, Tony Gibb but he ended up with the bronze. After that we had to drive here, we didn’t arrive until 1.00 am and the only food we could get from the motorway services on the way up, was pies! Now we’re headed straight back to Yorkshire for the East Yorkshire classic; still, I’ll get the mechanic to clean my bike and a proper massage, tonight!”

The pros and cons of pro life!