Showing the sparkle that took him to the 2002 World under-23 road championships, Francesco Chicchi (Italy & Liquigas) added himself to the list of favourites for Saturday’s Milan – San Remo, as he saw off the likes of Danilo Napolitano, Robbie McEwen, Erik Zabel and Maximiliano Richeze to take the final stage of Tirreno – Adriatico in rain sodden San Benedetto del Tronto on Tuesday.

The man whom I once heard tell an interviewer that he ‘wished for sunshine in the sky, and in his legs,’ Fabian Cancellara (Switzerland & CSC) had little problem holding on to his leader’s jersey to add ‘stage racer’ to his ‘chrono-man’ and ‘man to beat on the dust and pave’ labels, despite a dangerous finale on wet roads. 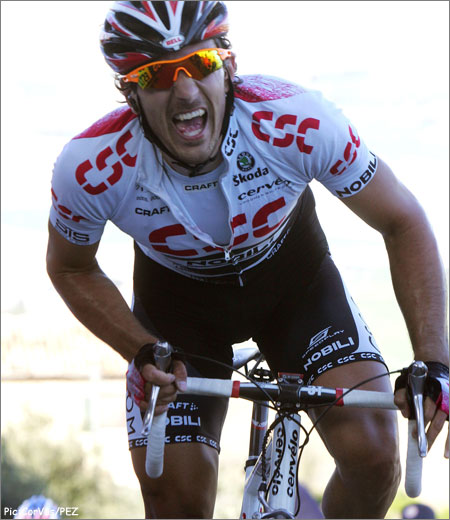 Is there anything Fabian Cancellara can’t do or at least will himself to do?

If Paris – Nice told us that Hushovd, Steegmans, Gilbert, and Evans now have “Primavera favourite” stamped on their files, who do we think deserves the same status after Tirreno? Tirreno is, after all, the traditional Primavera winner’s warm up, so here goes…

Stage one saw that master of self-knowledge and perfect peaking, not to mention scalpel sharp finishing, Oscar Freire (Spain & Rabobank) remind us that when he’s injury free and it’s his kind of race, who can beat him? 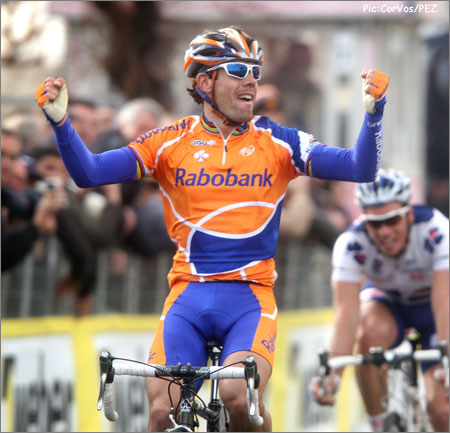 He has won twice here before, but he likes ‘hat tricks,’ as his Worlds treble testifies; he’ll be right there on Saturday.

Stage two was won by Raffaele Illiano (Italy & Serramenti) but more significant for our purposes were the riders who took the placings. 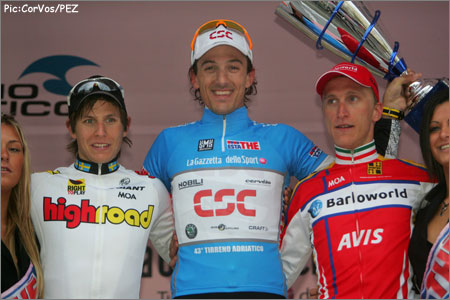 Barloworld’s Enrico Gasparotto impressed throughout this year’s Tirreno-Adriatico – can he do the same on the Via Roma?

In second place, and snatching the leader’s jersey, to go with the one he took in last year’s Giro, was Enrico Gasparotto (Barloworld & Italy).

He can’t win the Primavera in the last 200 metres, but just maybe he could slip away – he’s a man who wants to prove himself.

Finishing fifth – but without his bike, which he had already thrown across the line in rage after his rear mech came off worst from a run in with Linus Gerdemann’s front wheel – was ‘The Cobra,’ Saunier’s rising Italian star, Riccardo Ricco. 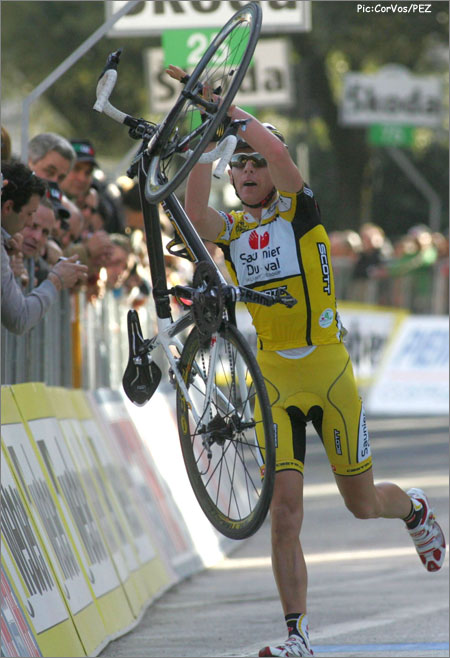 Guilty! That’s a temper tantrum if I’ve ever seen one.

Ricco won twice at Tirreno last year in anticipation of an inspired ride in the Primavera when he and Philippe Gilbert attacked on the Poggio; this year?

He crashed on stage three, lost a lot of time and is making negative noises about his starting, so if he signs on, he’ll want to win – but that can only happen on the Poggio.

Stage three went to Spanish champion Joaquim Rodriguez (Caisse D’Epargne) but again it was the men taking the places who provide the interest for Saturday. 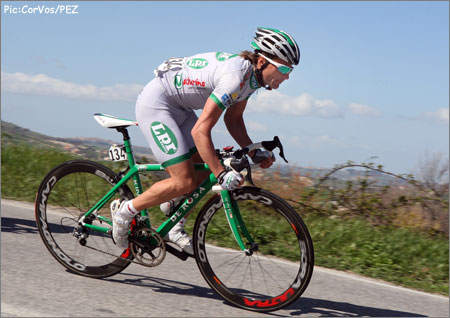 He didn’t win any stages, but he was always there. A first on the Via Roma in a few days time? Maybe.

He can’t win a sprint, but could he get the crucial gap on the Poggio?

LPR may not be Pro Tour, but they are a solid, well-drilled squad who impressed Rubens Bertogliati (Switzerland & Saunier) in the recent Eroica, with their strength in depth.

Tenth place was the key one, though – Fabian Cancellara hauled his big frame over the six kilometres per hour Montelupone ‘wall’ – that’s called a ‘sign!’ 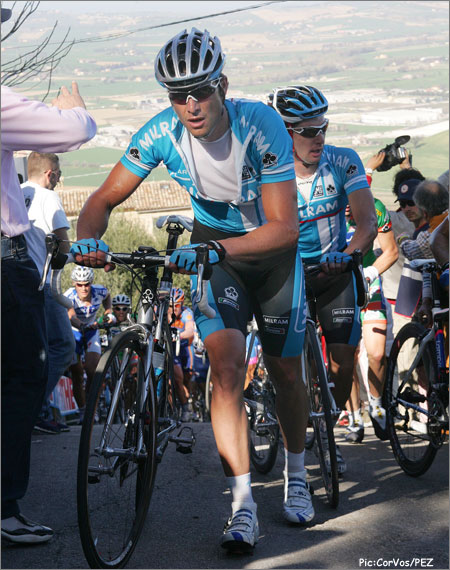 Yeah, it was THAT steep.

Stage four saw the man who used to have a jet fighter air brushed on his Colnago – ‘Ale Jet’ Petacchi (Italy & Milram) take his sixth bouquet of the year. He’s won in the ‘City of Flowers’ before but he has to shake Freire – that’s difficult! 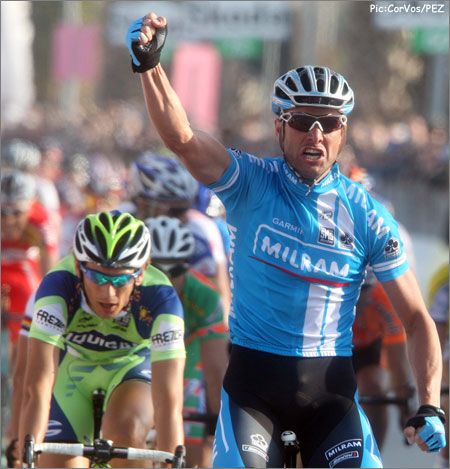 Stage five saw Cancellara removing any doubts about why he is champion of the world against the watch, his low geared ‘spinning’ on the climbs underlining his progress this year in battles with gravity. 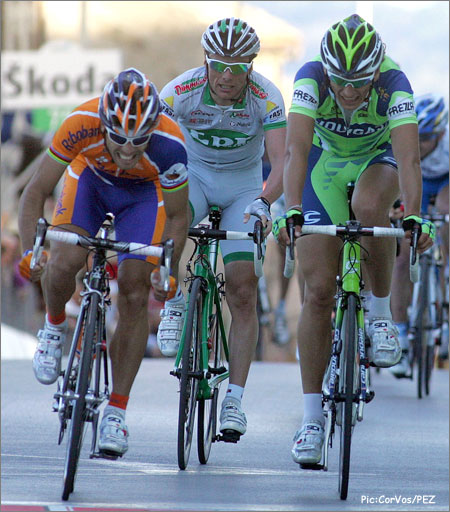 But let’s look further down the day’s classment, but only as far as second, ‘Pippo’ Pozzato; he’s tall, handsome, he can climb, he can sprint, he’s won in San Remo before and his Liquigas team are better drilled than synchronised swimmers; his is definitely a file to stamp “favourite.”

Stage seven, and we’re back to Liquigas and Chicchi. 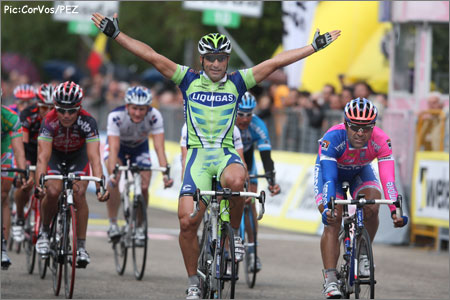 Who haven’t we mentioned?

If it’s a sprinter to win, really they must have won this year.

A sprinter’s speed comes as much from his head as his thighs, so it will be hard for German Danilo Hondo (Serramenti), even though he’s made the podium here before, a win in Langkawi isn’t enough. 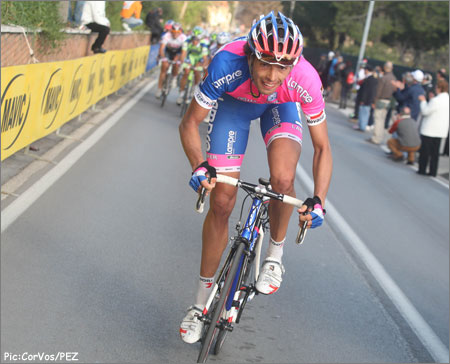 Don’t forget Mr. Ballan! He has been fairly quiet save for his Eroica ride, but you can be sure Ballan’s presence will be felt this weekend.

Daniele Pietropolli (Italy & LPR) was getting a lot of column inches earlier in the season, but the rest have caught up.

Tom Boonen (Belgium & QuickStep) hasn’t been himself since he came back from California; flying to the Middle East and the West Coast of America can’t be ideal preparation. But he’s a big strong man and like every pro on the circuit has dreamed of throwing his arms up at the end of those 300 kilometres. 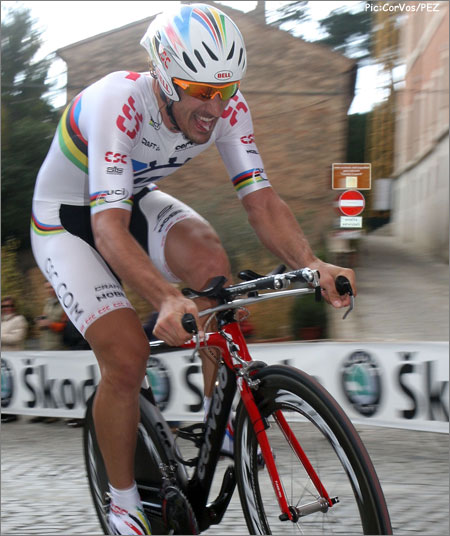 Wouldn’t it be amazing if Cancellara pulled off his Tour stage winning ‘sprint’ at Milano-Sanremo this weekend?

‘Little Robbie’ McEwen (Australia & Silence-Lotto) hasn’t sparkled yet; it’s too early for him.

So, whose name am I taking to the bookies?