We know the routes of Le Tour and il Giro for next year and today it was the turn of La Vuelta a Espaсa. Even if the announcement wasn’t star studded and flashy, the course is both innovative and exciting. Here’s how the presentation went and what the riders thought of it.

The last Grand Tour winners Alberto Contador and Carlos Sastre joined Alejandro Valverde and Sammy Sanchez to see the unveiling of La Vuelta 2009 today in Madrid. This year it was transmitted live on national Spanish TV from their studio, La Torre Espaсa, which all sounds great except no one knew the arrangements until yesterday morning and basically the press were not welcome at the TV studios, they would have to go and watch from the Palace Hotel. (PEZ chose the comfort of our local bar, which is much easier to reach from our Spanish HQ…) 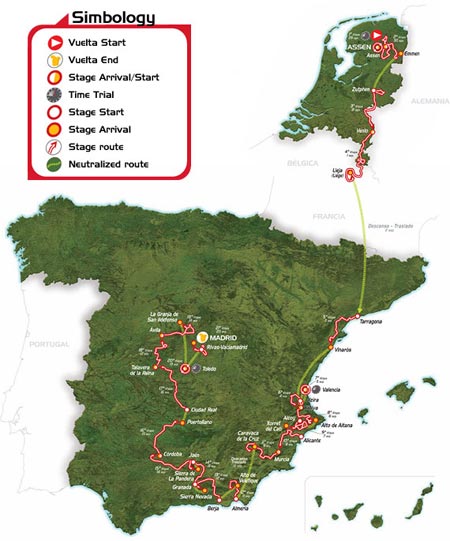 The evening before the presentation, Sastre and Contador were playing indoor football for the Red Cross Malaria Charity. The Iker V’s Rafa competition consists of karts, tennis and football with lots of stars from many sports and is headed up by Iker Castillas (Real Madrid) and Rafael Nadal (tennis no.1). Sastre played in goal for Rafa and it’s probably best he sticks to cycling, Contador scored against him at least once and has very good ball control, but let’s face it cyclist do look out of place off the bike!

The Presentation
The program started with the riders and the TV presenters cycling into the studios followed by a recap of how great a year Spanish cycling had in 2008; Giro/Tour/Vuelta/Olympics. Sammy Sanchez showed his shoulder tattoo of Beijing 2008 and the Olympic rings. This was followed by the usual chit chat about the past year from the riders, the Spanish Minister of Sport and the new Vuelta organizer, great year, brilliant future etc.

The Course
OK, so to the course of the 2009 La Vuelta, the first week is in Holland and Belgium with the start in the region of Drenthe and the prologue around the motor race circuit of Assen, a distance of 4.5 kilometers. The next stages go south towards the longest stage to Liege which will re-live the final and hardest parts of the classic; Liege-Bastogne-Liege. Perico Delgado, Tour winner and TV pundit, can’t wait for the race to go the heartland of cycling, not just race cycling, but the lands where people use their bike on a daily basis. Contador was a little worried about the toughness of the stage to Liege as was Sastre, who also was concerned with the danger of crashes in the possible rain.

Back to Spanish Soil
Once the race returns to Tarragona on the North East coast, the riders face a list of very hard stages with many climbs every day until the last few days of the Vuelta. Tarragona to Vinaros will loosen the legs before a killer combination of a hilly circuit of Xativa, followed the next day by a 30 kilometer time trial round Valencia taking in the F1 circuit and the America’s Cup port. The next days have the summit finishes of Aitana (1585m), Xorret de Cati (1090m), Caravaca de la Cruz (620m) and Alto Velefique; this takes the race from Valencia down through Alicante and into Murcia. The second week is finished on the monster of the Sierra Nevada at 2100 meters altitude in Andalucнa.

Valverde was looking forward to the second week as it passes though his home area and he knows the climbs well, very hard, but great for the spectators. On the other hand Sanchez thought it will be sore on the legs with lots of climbing, “a hard Vuelta!”

The Last Week
From the deep south in Andalucнa the race works its way north towards the capital city of Madrid through Cordoba, Cuidad Real and a classic finish in the walled town of Avila, before the last time trial around the ancient city of Toledo of 26 kilometers. The last stage should be the usual lap of honor from Rivas in the outskirts into the centre of Madrid.

The Riders’ Thoughts
Sanchez said “A very hard Vuelta, perfect for attacks from Sastre and its also good for riders like Menchov.”
Valverde; “It’s not a time trialist’s route; it’s a Vuelta for the climbers!”
Contador; “I like it, it’s about the mountains, very beautiful and hard, it has illusions and is very animated.”

Over at the Palace Hotel, Ezequiel Mosquera, the mountain goat from Galicia, was happy with the course “it’s distinct and spectacular!”

Perico Delgado summed it all up with “OK so there is no Pyrenees or Asturian climbs, but there are many other hard climbs; in Alicante and Andalucнa. The time trial in Toledo could be decisive, if say there are three riders close to one another on general classification, Toledo could make the difference!”

So there you have it, the last of the three Grand Tours is unveiled, looks good at first glace and there are many stages near where I live, for a change! Apart from Holland I should be following many stages. Stay with Pez for more in-depth analysis of La Vuelta.