Race report: Not for the first time in a World’s the Italian Azzuri managed to turn overwhelming numerical supremacy into handle-bar thumping rage, blowing the rainbow jersey in the last 500 metres. That gave us a ‘surprise’ winner in the race for the stars of tomorrow….

Three men in the final nine rider selection, and the Italians were undone when they failed to follow Russian rider Egor Silin’s desperate attack. The kid who did, Fabio Duarte of Columbia, swept past, took the last big left-hander first and powered away to the gold medal.

It was a painful 500 metres but he opened enough of a gap to leave home rider Simone Ponzi battering his right fist off the bars in fury. 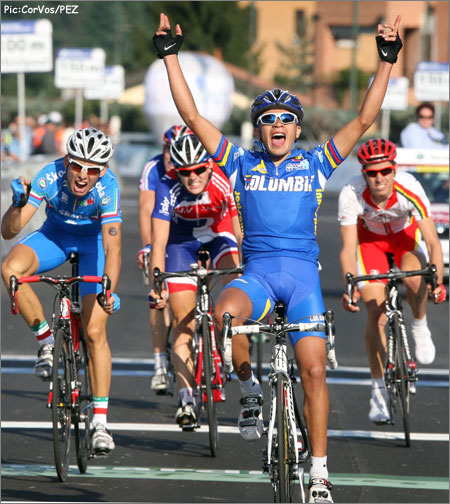 Duarte pulled off an incredible move in the final 500m!

Duarte had about 10 metres coming into the finishing straight, and shot a quick glance under the right arm – “Shit! They’re closing – hammer the pedals round again”.

Twenty metres to go and a look over the left shoulder – “Shit! Can’t see anyone! They must have gone right!” – three more desperate pedal revs and throw the arms up!!

It was a thrilling finish, made all the more exciting because the team with the numbers had a brainstorm and never shut things down in time. 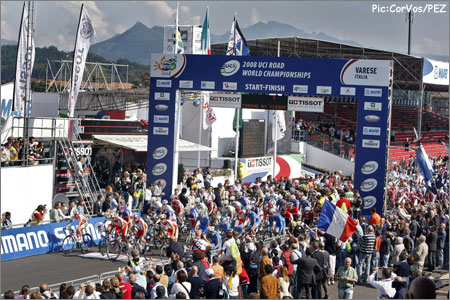 It was a fine day for a melee.

From the start: It’s exactly the same course as for the elite men and women, but only ten laps for the “kids” today. It gives their big brothers and sisters a chance to make notes on how the route plays out in race conditions. 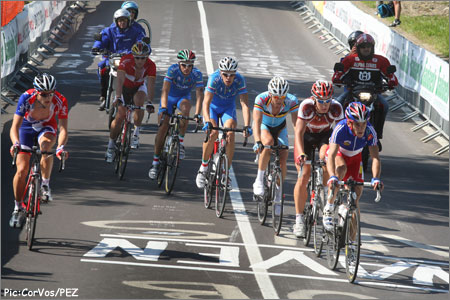 The break early on.

We can expect some of the guys that succeed today to go on and have big pro careers, although not every past champion has “made it” at the very top – the Ukrainians Popovych and Grabovskyy haven’t lived up to their promise so far.

This is the thirteenth under-23 worlds, and Italy wants a fifth title – Figueras, Basso and Giordano all won golds, but it’s been mostly eastern European winners since Francesco Chicchi in 2002: Lagutin, Siutsou, Grabovskyy and, last year, Martin Velits from Slovakia. 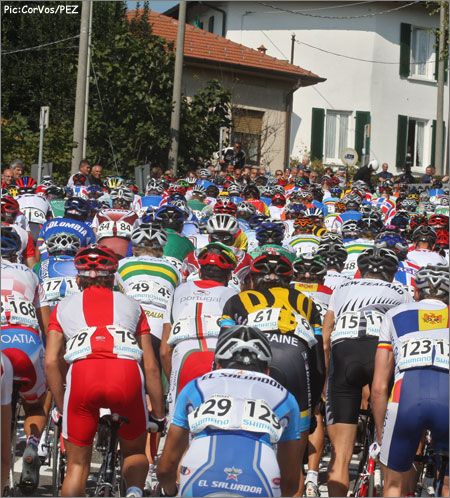 It was a pretty confusing picture from the start – attacks off the front and meltdown off the back. The peloton made like the legendary hairy Californian banana creatures and split.

Duarte and Frenchman Cyril Gauthier were in the first big eleven-strong move which went clear, and stayed the course through all the subsequent regroupings. The gap out to the peloton went beyond two minutes, with chasers trapped in between. 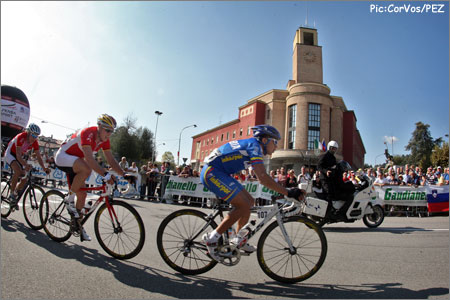 With the bell clattering for the last lap, the Italians had managed to maneuver themselves into the position of strength – with Damiano Caruso and Daniel Oss they had numbers against Cyril Gauthier (France), Ben Swift (GB), Duarte (Columbia) and Germany’s John Degenkolb. The two Azzurri plus Swift and Degenkolb had bridged to the front and made the race. 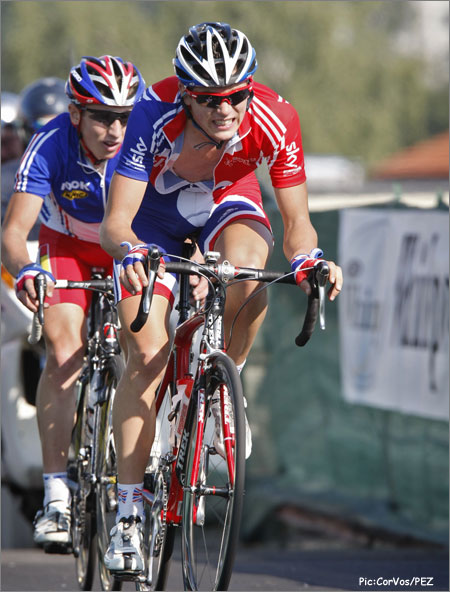 Ben Swift was great all day, and just narrowly missed the podium with 4th.

Behind, Ireland’s Daniel Martin was absolutely slaughtering himself to get across to the leaders – hands on the brake hoods, mouth wide open, shoulders rocking. A serious lone pursuit effort as the Belgians started to try to shake up the remains of the peloton.

Martin, winner of the Route de Sud this summer aged 21 (!) ploughed on hoping his chase would get him in touching distance once the leaders started the inevitable late arsing around. 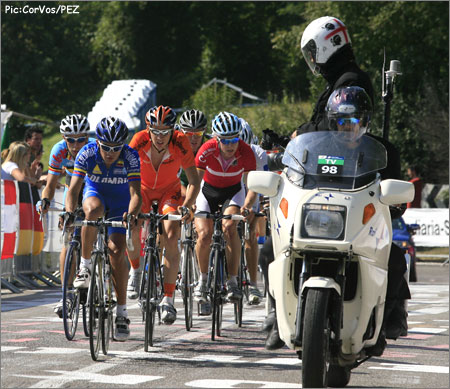 But, bafflingly, the three riders who suddenly appeared in the front were Costa (Portugal), Russia’s Silin and the third Italian – Ponzi. No sign of Dan Martin, and no real indication from the patchy TV coverage how they got there! 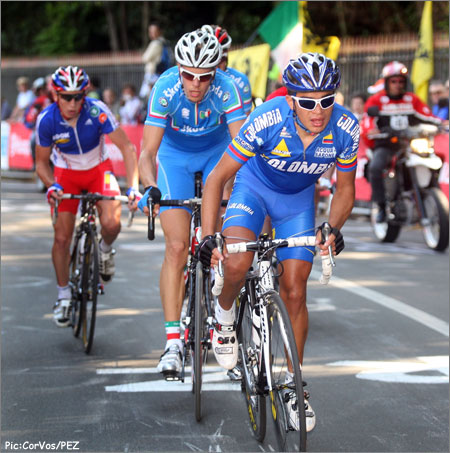 The home crowd started to brandish their tricolours in anticipation of a gold medal, as the leaders swept into the ultimo chilometro. The chase was closing in and a Dutch rider managed to latch on at the red flag …… 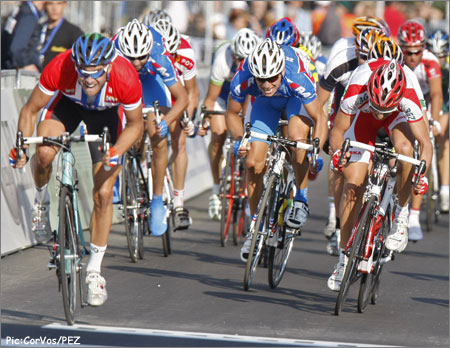 …. but up front, Duarte was spoiling the home party and snaring himself the rainbow jersey. He’s another of Gianni Savio’s little South American gems, currently racing for the Serramenti PVC Diquigiovanni-Selle Italia squad.

Even on the top of the podium, Duarte was barely taller than his rivals – Ponzi had composed himself and just about managed a little smile/grimace. 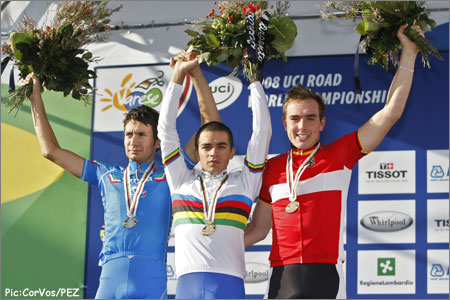 A pretty exciting race, and after being on the attack for practically the full distance, a deserving gold medallist. Bravo, Fabio!

Keep it PEZ as the big boys (Sunday) and the ladies (tomorrow) come out to play for the main prizes!