Race Report: A rider from the United States of America won the Elite Woman’s Time Trial, but probably not the one we all expected! Kristen Armstrong, the Olympic Champion was favorite, but Amber Neben lead from the start and took the Rainbow jersey.

After yesterday’s Men’s Under 23 time trial, today it’s the turn of the Elite Women, based on the bigger loop from yesterday up to Brinzio and then back to Varese. There is a slight climb of 164 meters from the start, but the course is mostly undulating over its 25.15 kilometers. 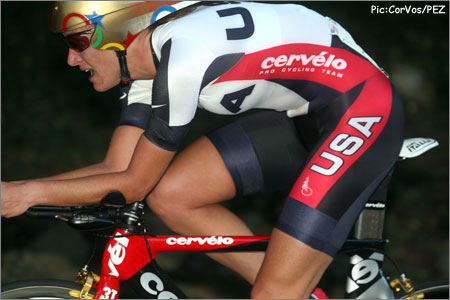 Armstrong was good today, but nowhere near what we saw in Beijing.

Of the forty three riders there are some fast girls, last rider off is Kristin Armstrong of the U.S. amongst the others; Karin Thьrig (Switzerland), Susanne Ljungskog (Sweden) and Judith Arndt (Germany) are all top performers. Then there is Jeannie Longo-Ciprelli, what can we say about the French lady, she has won probably every woman’s race on the planet and it’s not polite to mention a ladies age! 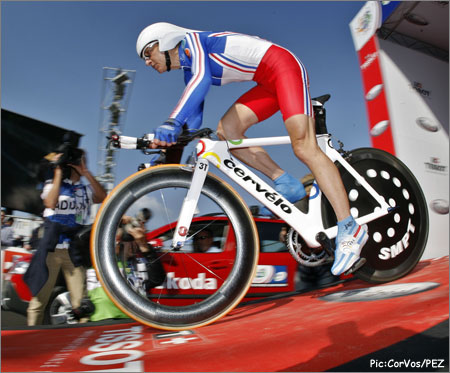 Jeez, what’s there to say about this unbelievable phenomenon? Jeannie Longo puts even Ekimov to shame.

First Rider is Off
At 2 o’clock, Kathryn Bertine from Saint Kitts and Nevis, she is actually from America, but represents the small collection of Islands, is first away. Italian rider, Anna Zugno is making hard work of the climb out from the start, but she takes the fastest time (12:45) to the first time check at just over six and a half kilometers, early days and lots more riders to come, down the other side she looks much smoother. 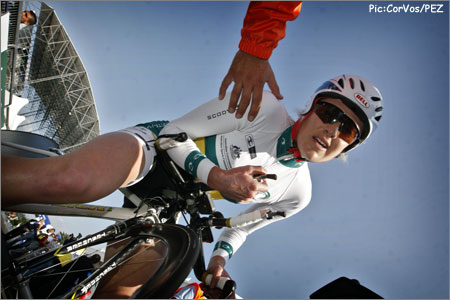 Vicki Whitelaw was the best placed Australian with a solid 16th on the day.

As Italian TV concentrates on their own riders, Sharon Laws from Great Britain heads off, she became National TT champ earlier this year, but the more experienced Emma Pooley is more likely to do a good ride. Like yesterday a lot of the riders are not too happy with the narrow starting ramp, out on the course; Anne Samplonius from Canada is laying down the times to beat at all the time checks, 11:47 at 6.7 kms and 22:24 at 15 kms, she records the fastest finish time at 34:55, but we have only had three riders in by this point as Samplonious had caught Irish rider Heather Wilson for two minutes. 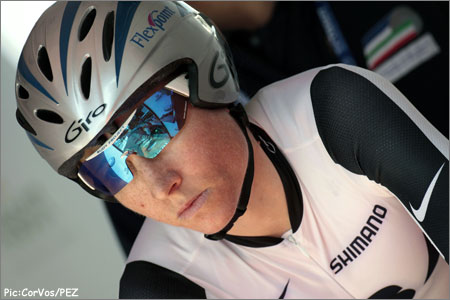 Martina Ruzickova (Czech) was sitting in second position at this time with 35:53 and Sharon Laws (G.B.) was third with a time of 35:54, no one was getting close to any of the times of Samplonius, she was safe in the leaders seat until Russian, Tatania Antoshina took the fastest time at the second time check by 25 seconds. So far it had been a good day for Canada as Julie Beveridge moved into second place, but not for long as Vicki Whitelaw of Australia pushed her down to third as Jeannie Longo started her ride. 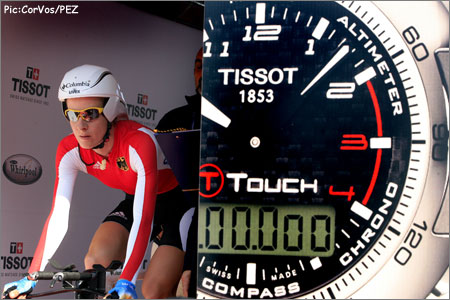 Judith Arndt was solid for Germany today – netting 3rd. Too bad Hanka Kupfernagel wasn’t in attendance to defend her title from last year!

Now that the best riders were on the road we started to see many changes on the intermediate time checks, but Antoshina was the first to knock the Canadian; Samplonius off the leaders seat with a time of 34:14. As Christine Thorburn (U.S.A.) kicked out of the start house, her team mate; Amber Neben was taking the lead at all the time checks, the third U.S. rider, Olympic Champion, Kristin Armstrong had started, so everyone was out on the road. 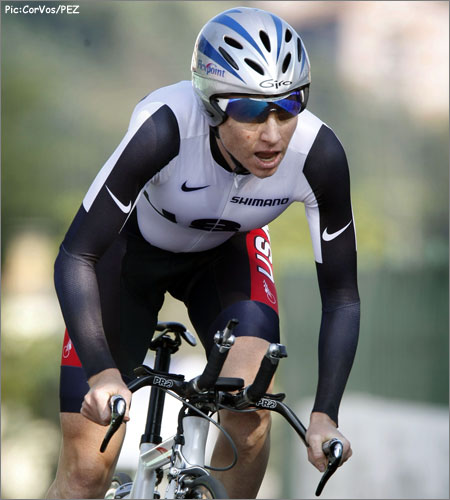 Neben set a torrid pace throughout the whole course.

Amber Neben became the new leader, her time of 33:51 will be hard to beat and at this point Armstrong is slower at the first time check and only in 4th place. German rider Judith Arndt had started slowly, but pushed into second place by the second time check and put up a fast enough time for second at the finish in 34:13. 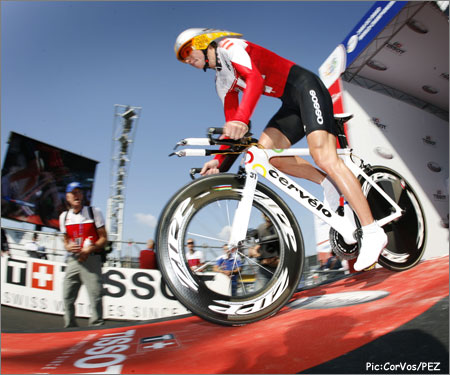 Karin Thurig is a dependable bet to finish top 10 in any big time trial.

The near 50 year old Jeannie Longo finished with a good enough time for her to finish in 13th place (35:11) as Armstrong was getting faster, moving her into second place at the second time check and it was looking good for a U.S. gold and silver. 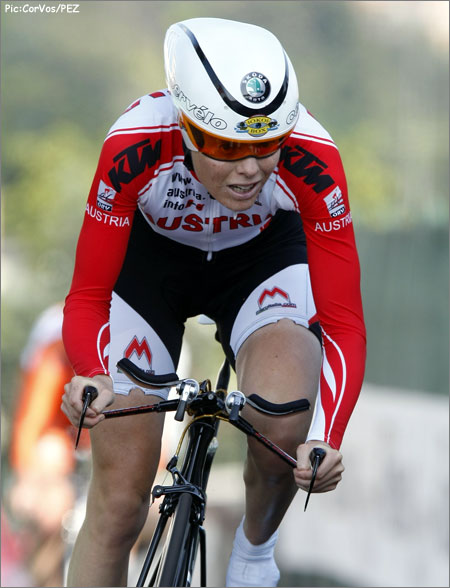 Christiane Soeder rode the time trial of her life today for 2nd.

Neben was looking decidedly nervous waiting for the next riders, Christine Thorburn wasn’t going to worry Neben, but there was still Van Dijk (Holland), Soeder (Austria) and Armstrong still to finish. 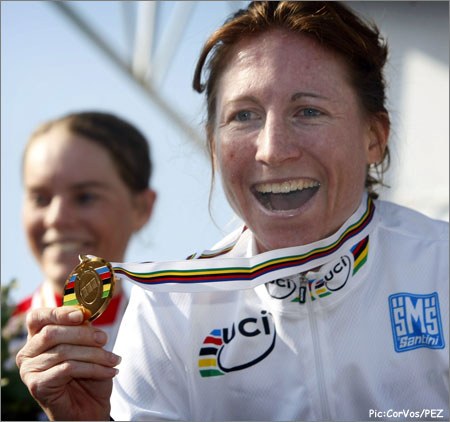 Van Dijk was caught by Soeder and as Armstrong came round the last corner we knew she wouldn’t be fast enough and didn’t even make the podium, so must have slowed on the last section. Amber Neben was relieved to see she had won and Christiane Soeder moved into second a head of Judith Arndt. Tears of joy and relief for the small American girl as the Stars and Stripes rise up the flag pole. 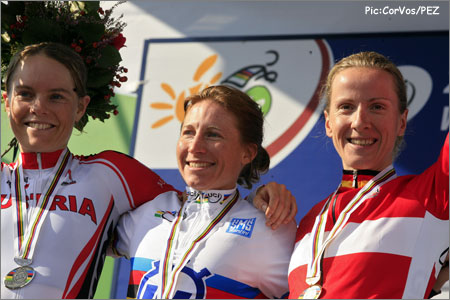 Tomorrow is the Elite Men’s time trial and there are a few favorites, top at the moment seems to be Levi Leipheimer, stay PEZ for all the excitement. 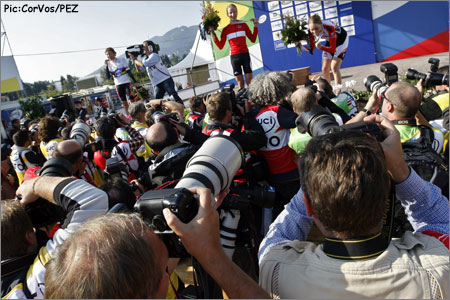