Race report: They blew the under-23 road race, they didn’t pull off the women’s title … but the Azzurri took gold and silver in the ‘biggie’! Paolo Bettini’s dream finale was the stated goal of Franco Ballerini’s men, but did ‘Il Grillo’ bag his third straight rainbow jersey?

The answer is ….. No! The rainbow bands pass onto the shoulders of his Italian teammate Alessandro Ballan who produced a solo dash to the big prize. And to set the home fans up for a major party, Damiano Cunego won the group sprint for silver. 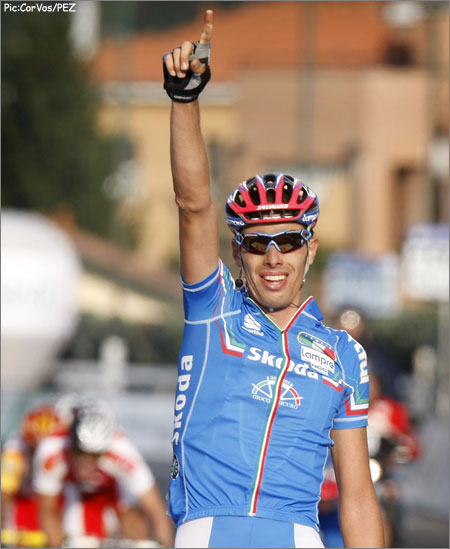 Bettini was a favorite, and the Italians were seen as the strongest team, but 1,2,4 and no one named Bettini – wow.

Denmark’s on-form Matti Breschel snared the silver, just preventing Davide Rebellin from pulling off an Italian clean sweep. Quite the day for the ‘squadra’!

Tactically, they nailed it – Ballan and Rebellin made the select final group and took it in turns to try and break the race. Ballan, ex-Flanders winner and recent Vuelta Espana stage winner, drew the lucky card out of the pack with his jump two kilos from home ….. ladies and gentleman, your winner! 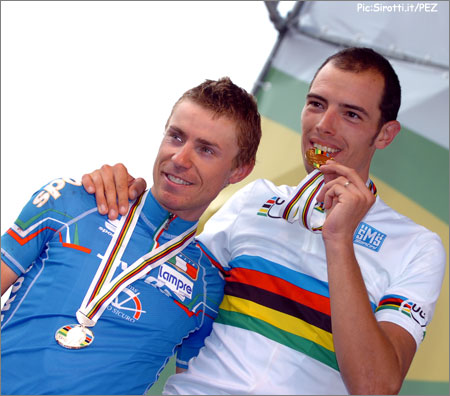 Ballan and Cunego made a triumphant Italian 1-2 on home soil.

There was a ‘top trumps’ set of riders in with a shout coming into the last 5kms: the Italians and Breschel, plus Grivko, Nuyens, Van Avermaet, Gilbert, Pfannberger, Gesink, Rodriguez, Wegmann, Van Goolen, Sorensen and Lovkvist. That’s a lot of guys who started the Vuelta!

And here’s how they ended up there …..

The tale of the tape!: Italy got it spectacularly right today … Spain, on the other hand weren’t quite on the ball. In fact, they nearly missed the start and had to run to the sign-on! Valverde’s reaction? “Mucho stress”, according to Al who was keeping an eye on things from sunny Spain. 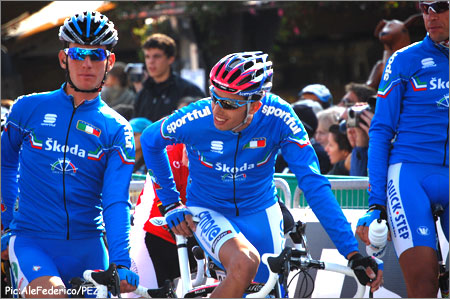 Ballan at the start Sunday morning.

Congratulations are due to Ukraine’s Oleg Chuzhda who was the day’s first attacker – joined by Luxembourg’s Christian Poos (No, he doesn’t … he rides a bike! Boom-boom!) and Richard Ochoa of Venezuela. 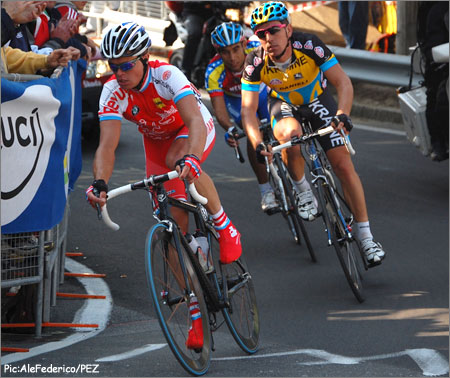 The early break out for a long, long day.

Approaching half-distance, the Italian workers got down to business as only a lap earlier the whole field was languishing at a colossal 17 and three-quarter minutes! 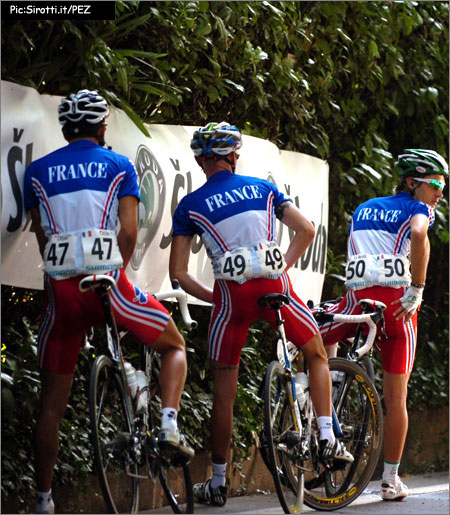 There was a lot of time for anything but bike racing during the early hours of the race.

It was a stellar job from Marzio Bruseghin, Gabriele Bosisio, Matteo Tosatto and Luca Paolini who slashed the lead – the Brus’ in particular was on a mission, mashing away on the front.

Paolo Bettini was active in one of the first escapes after breakaway hero Chuzhda finally surrendered with about 55kms left. At that point, it was far too early for a group to co-operate though. 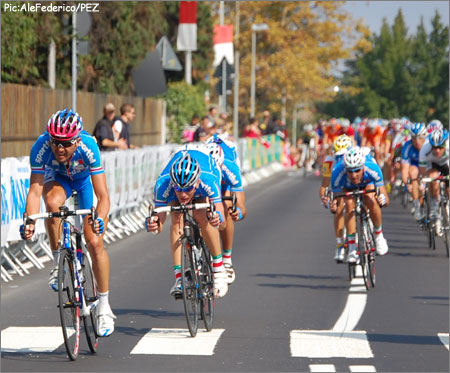 Marzio Bruseghin was a big motor for the Italians.

Things started to shape up with 40kms to go – Rebellin forced a selection, joined by Cunego, Grivko, Rodriguez and Fab Wegmann. The Belgians put the hammer down and hauled things back, but we’d seen the strong men who’d be in at the death.

20kms to go and it’s familiar names off the front: Ballan, Van Avermaet, Breschel, Rodriguez and Wegmann pushing it along. Gesink and Lovkvist lead a gradual trickle of riders across and it’s attack-central. 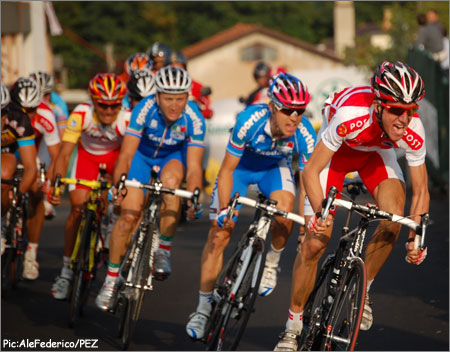 Pfannberger has a go, Breschel tries, Van Goolen parries. It’s an old-fashioned sword fight all the way. The gap to the peloton is stretching – Bettini is trapped behind and looks resigned. The dream finish looks off. 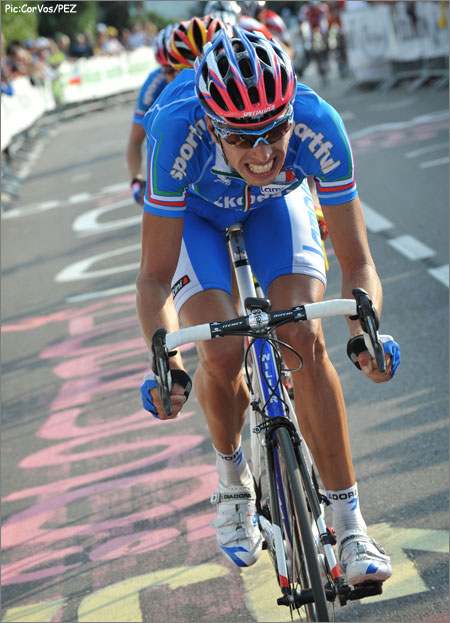 Immediately, Ballan counters …. and that’s the story. The lanky, and supremely polite, champion motors away to the gold. 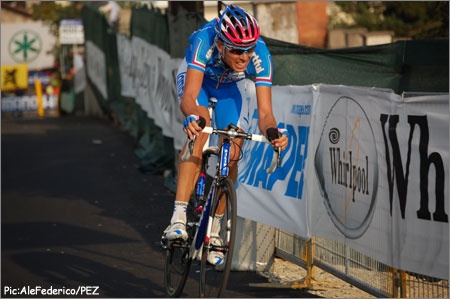 Cunego ices the cake, and Breschel just stops Rebellin from putting the ribbon round it. 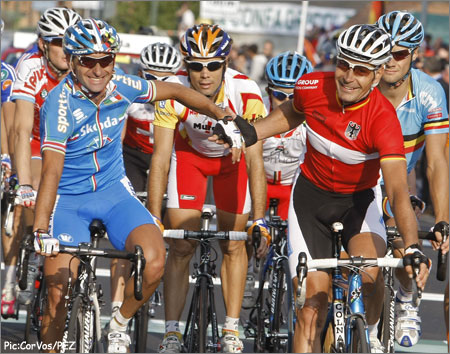 Their final race: Bettini and Zabel.

Bettini and Zabel had the honour of leading home the first big ‘peloton’ – 28th and 29th, just under five minutes back.

Frank Schleck, who’s got some major explaining to do in the next few weeks, rolled in behind them in 41st. 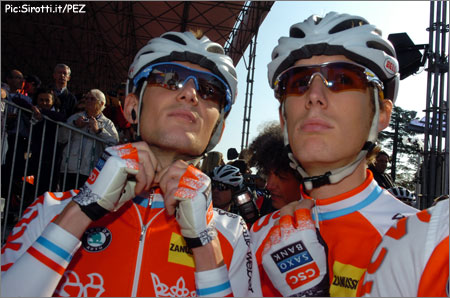 …some major explaining to do…

Only 77 riders finished the course, with Levi Leipheimer opting out of the start. Even with a 39 km/h, it shows just how hard the race was. 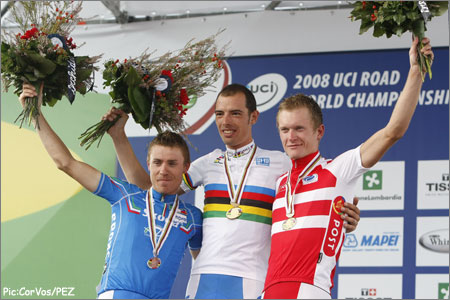 Keep it PEZ for all the roadside reaction, if our correspondents survive the partying …. and there’ll be all the celebratory shenanigans coming up in tomorrow’s Eurotrash! 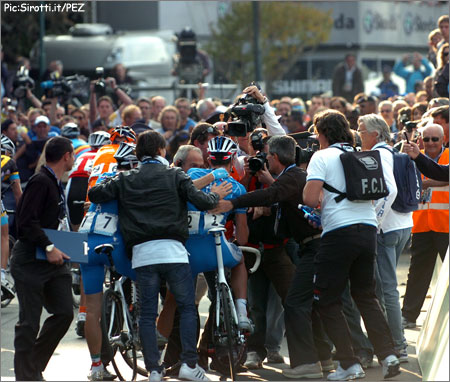