This Sunday in Varese Italy, the best cyclists in the world will vie for the right to wear one of the most coveted jerseys in cycling: the Rainbow Jersey of World Champion. An unusually strong field is assembled, and there are better than ten riders that will be favorites in the 260 kilometer event.

I was lucky enough to ride the course today with both the Belgian and French national teams. I did two laps of the 17 kilometer loop, and was able to get a good feel for the race course and how the action may play out come race day on Sunday. One thing is for sure: the action will be fast and furious throughout on the twisting, technically challenging parcours. 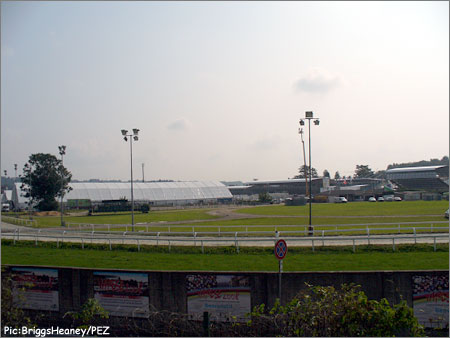 The race course begins at the Mapei cycling stadium, a horse track that has been converted into a small village for the world championships. Reserved seats are available for the truly rabid fans, while those with less passion (or money) will have to fend for themselves on other parts of the race course. After an initial flat half kilometer, the field will approach the first climb on the course, a stiff challenge of about one kilometer. Although the climb is not long, it will still provide a great opportunity for riders to attack, particularly during the latter stages of the race. 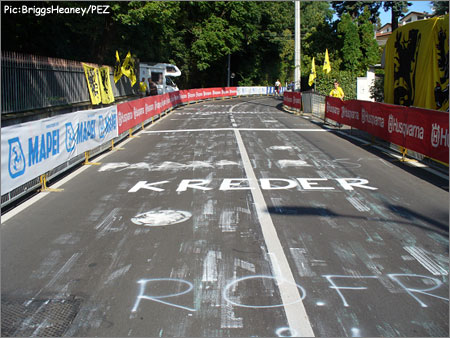 After reaching the top of the first climb, a twisting descent awaits, and another opportunity to attack will present itself, particularly for those riders who are good at descending. Riders like Davide Rebellin, Luis Leon Sanchez, Nick Nuyens, and Dominique Rollin may find the first descent a good place to attack, in hopes of forcing a winning break. The most remarkable fact about the long eight kilometer descent is how technical it is, constantly twisting and turning. A moment’s indecision could lead to a catastrophe, landing an inattentive rider into one of the metal barriers lining the road. 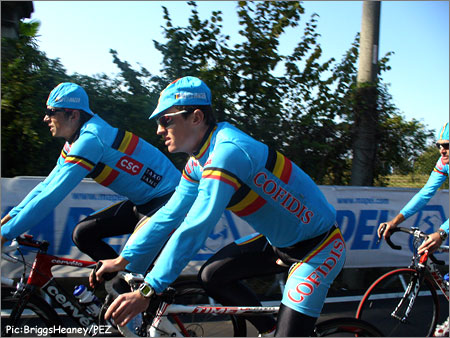 Nuyens is a threat for the win on Sunday.

Once the field completes the descent, there is a brief respite before the second major climb of the day appears. This is the longer of the two climbs, but is not overly difficult. It is just under four kilometers in length, and even though it isn’t extremely steep, it will still provide enough difficulty for the top favorites to lose most of the field. Expect a select group of no more than 15 of the world’s strongest riders to make the final selection. 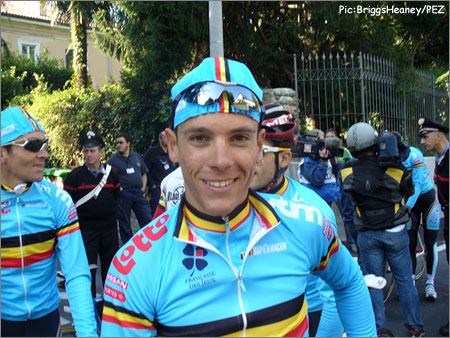 Gilbert feels good, and is not afraid to say so.

One of the top favorites for the race, Philippe Gilbert, expressed that he is feeling great for Sunday’s test. A fan from the USA following the Belgians commented to Gilbert that America has never been able to watch Gilbert race. His response was, “I feel great, here I come!” The Belgian star also added, “I’m here to win, my team is strong, and I am ready.” And if Gilbert can’t stay with the favorites, the Belgian team will still be in the hunt for the win, with Nick Nuyens and Tom Boonen. 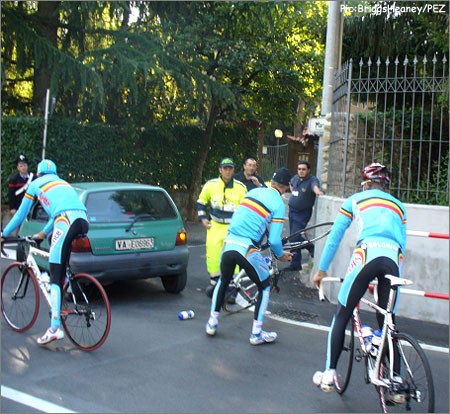 Boonen had a near miss with a green car pictured. Luckily he was OK.

Speaking of Boonen, the sprint star was involved in a near miss while descending during training on Friday. A car in front of him was preparing to turn right into a drive way, but failed to signal. Boonen crashed into the back of the small green car, but luckily was unhurt and able to smile about his near miss. “It was close, but I’m OK. Plus, it keeps me on my toes, eh?” Indeed it does. 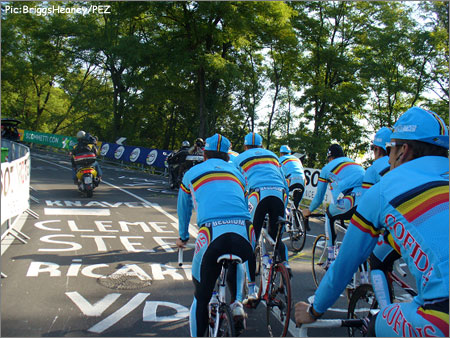 After taking on the climb, there are still four kilometers until the finish line. This distance is flat, with exception to a small incline on the way into the stadium. It will be here, after 17 long laps, that the eventual winner may be able to distance his rivals en route to the win. Riders with strong climbing skills and fast sprints will be best equipped to use this slight incline, among them Paolo Bettini, Alejandro Valverde, and Matti Breschel. However, riders like Oscar Freire will still be in with a chance providing that they can stay in contact leading into the stadium. 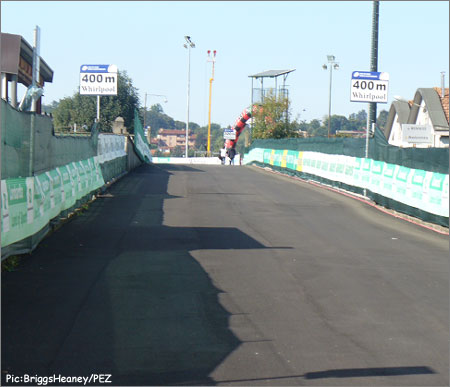 The final ascent into Mapei stadium.

The road race on Sunday promises to be an exciting one filled with action and surprises. As Danish rider Matti Breschel said, “It will be tough. Not as hard as Stuttgart, but still very difficult. Bettini looks very strong, but so do Freire and Valverde. I’ll be watching all three and waiting for my chance.” Breschel’s comments mirror those from many other top pros, including France’s Sylvain Chavanel, Russia’s Vladimir Gusev, and Australia’s Mick Rogers. Whomever can manage to take the win will have deserved the victory, as a world class field and tough parcours will ensure that the strongest man in the race will wear the rainbow jersey at the end of the day. 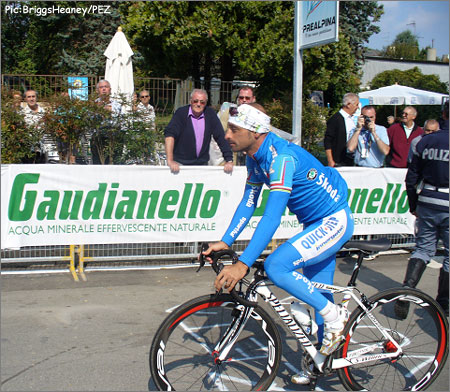 Bettini is looking to become the first athlete ever to win the world title three years in a row.