Worlds’08: The Favorites For Sunday

Paolo Bettini is going to have a hard time going back to back to back. Bettini is on A+ form at the moment, but of all of his Worlds victories, this will be the one that will be the hardest to single him out as THE man to win. Why? This writer does not think that the course is hard enough, and the finish? Flat. He’s still a top favorite, but I think there are a number of other very promising possibilities. Read on.

There has been much talk of a tough Varese course, but you know something has to be up when Tom Boonen openly throws his cards down and says: I can win this. Well, I don’t know if he said those exact words, but he is making a serious run at it. Paolo Bettini is the name on everyone’s lips, and Bettini is indeed a very quick finisher, but against the likes of Tommeke on a flat finish? Fuhgettaboutit.

Looking Back To Stuttgart
So, why the not-so-hard conclusion? Look first at last year’s Stuttgart course, which still saw a largely intact bunch coming into the last lap and had over 50 riders within a minute at the conclusion: 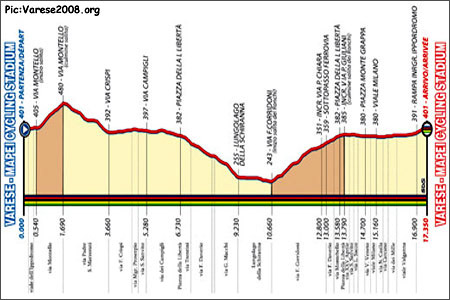 In short, come on, these are the world’s best, and the world’s best have a habit of being able to get over such obstacles. You know how every year someone manages to complain that a race like Liege-Bastogne-Liege barely breaks up anymore? Yeah, well those climbs are a helluva lot harder than what Varese has to offer. 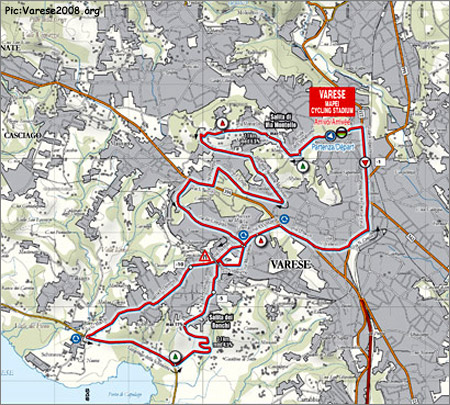 I’m not saying that it’s going to be easy. Absolutely not. It’s going to be hard, it’s going to be long, lots of people are going to be tossed out the back of the howling peloton, but this is not the selective course that we’ve enjoyed for the past couple of years. Three-time World Champ Oscar Freire is well aware of this: “I don’t see a specific point on the course that will decide the race. It depends on the weather. If it rains it will be really hard. On this course, I see it difficult for one rider to arrive solo. I think a group of 30 or 40 riders can arrive at the finish. Of course, there is always a chance that someone like Bettini attacks and ends ahead of everyone else…” 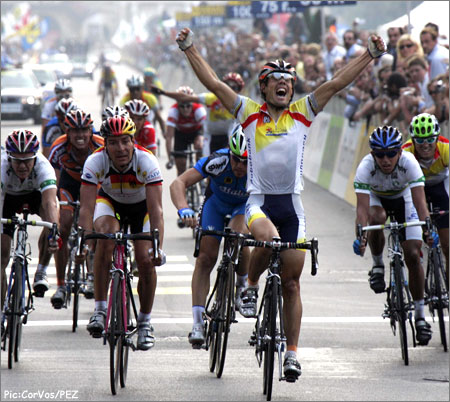 I’m just a humble journalist, so when Oscarito says he thinks 30-40 are coming to the line and Tom Boonen has rainbows in his eyes, I have a sneaking suspicion they could be right.

With that in mind, methinks a damn fine sprint is a requirement for success on Sunday, and since Fabian Cancellara won’t be in attendance, we don’t have to worry about the likes of one of his ultimo chilometro gigantowatt accelerations. 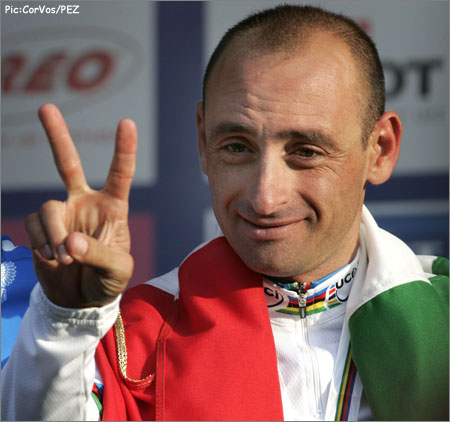 Bettini and Freire are aiming at history – Bettini for the first ever three-peat and Freire is gunning for the first person ever to win four World Championships. Valverde? Well, he just happens to be a really quick finisher and will more than likely make the final selection sprinting for the stripes. 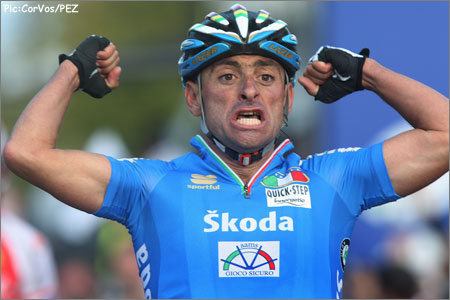 As for who should get the nod between these three? Oscar Freire wins Tour de France sprints and has a Green Jersey to go along with his three rainbows. Paolo Bettini and Alejandro Valverde cannot say the same. Valverde and Bettini are threats in any sprint, and anyone that takes either of these two to the line is a moron…save for maybe Freire and the BIG time sprinters. Valverde and Bettini were impressive at the Vuelta – winning a number of stages between them, but all were tough finishes – nothing of the blazing fast run to the line we should see on Sunday.

In what appears to be a flat run-in to a flat sprint, the odds tilt in the favor of the sprinter with bunch sprinting creds – and Oscar Freire has those. Freire has to be the man to beat. He is going well and rolls into Varese with all the confidence in the world. 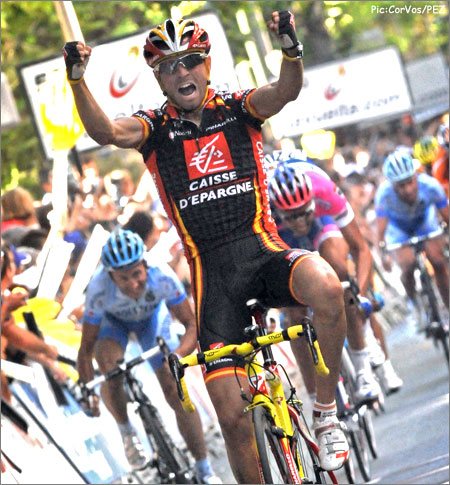 Many, many, many are trumpeting the name Valv.Piti, I mean Alejandro Valverde, and sure, I think he’s a big favorite, but if Spain races correctly, they should be putting their money and legs behind Oscar Freire. Of course, that’s assuming they really do come together in a 30-40 man bunch kick. 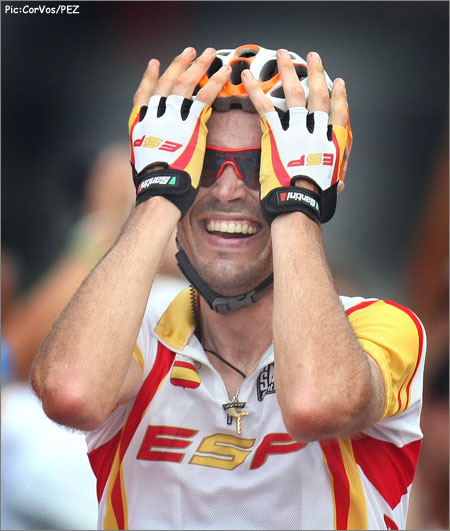 Have I taken a moment to take note of the Spanish All-Star team? It’s sick… Freire, Contador, Sammy, Valverde, Zeke, Joaquin, LL Sanchez…yikes. If Spain gets a day like they did in Beijing: Bettini doesn’t stand a chance, nor does anyone really. 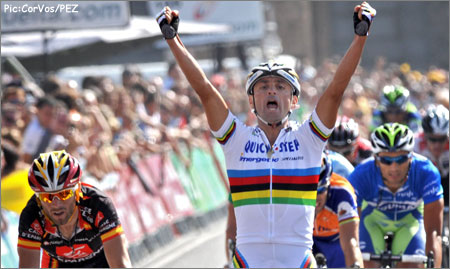 It is interesting to look at the score between the three riders: Freire beats Bettini and Valverde most of the time, but not all the time, Bettini beats Valverde sometimes, but not all the time, etc etc. It’s nowhere near as easy as I’m making it sound, but for the sake of actually making a pick, I’m going with Freire first (even though I’m no big fan of Oscarito).

If This Bunch Kick Really Does Happen…
Then a whole bunch of other names start to come to mind… The first one that pops into mine is definitely Tom Boonen. Boonen was on fire at the Vuelta and the second half of his non-Tour season has been excellent. He seems confident and has compared his form of late to that of his World Championship winning fall back in 2005. Yeah, Tom Boonen is a bad, bad man. He’s my going out on a little bit of a limb pick. 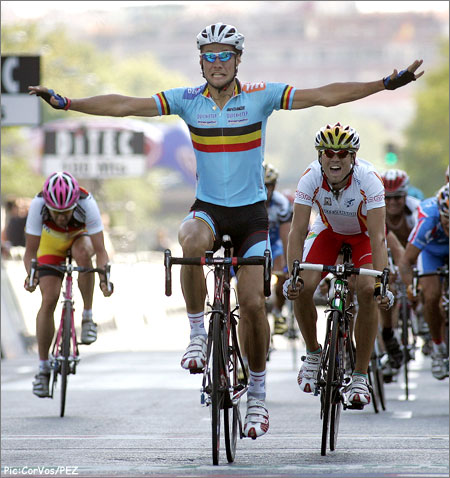 I said bunch kick and I still haven’t mentioned Austrial…shame on me. I think the Aussies have a damn fine team that could even throw a few koalas or kangaroos or some other stereotypes at the juggernauts of Espana and Italia. Davis, McEwen, O’Grady for a bunch sprint anybody? 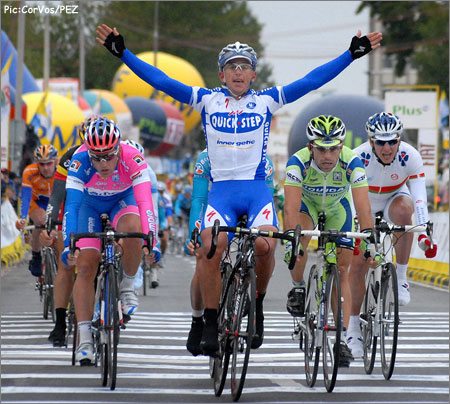 Allan Davis spent most of this year in the wilderness of Pro Continental racing, but thankfully Patrick Lefevere rescued him so he could start winning big races again, and really threatening in the big, tough races with sprints at the end…you know, something like Sunday. He’s going more than ok at the moment after a sterling ride in Poland, and I’d take his odds right now if Unibet bothered to give him some. 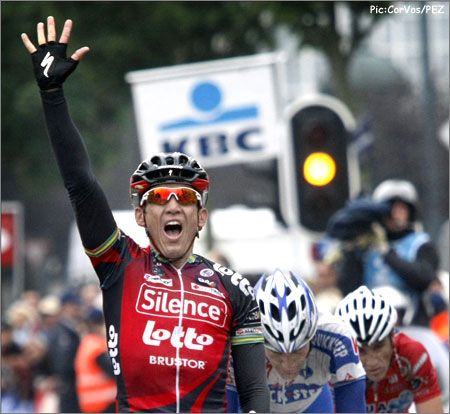 And is that a picture of Robbie McEwen? Yep. I want an old guy to win on Sunday. Call me sentimental. I’d love to see a veteran sprinter somehow make it to the line and come out on top over all of my other big favorites. Robbie Mac and the presumably soon to be retired Erik Zabel are first to come to mind. Ok, stop hating on Robbie McEwen. Better. Now I can continue.

The Aussies really do have a solid squad though, and I think they’re right up there with Italy and Spain in terms of capabilities to animate the race and possibly produce a winner.

Team Belgium ain’t too bad either. There’s of course Tom Boonen heading it all up, but right behind him, with nearly the same odds (in my mind)? Greg Van Avermaet and Philippe Gilbert. 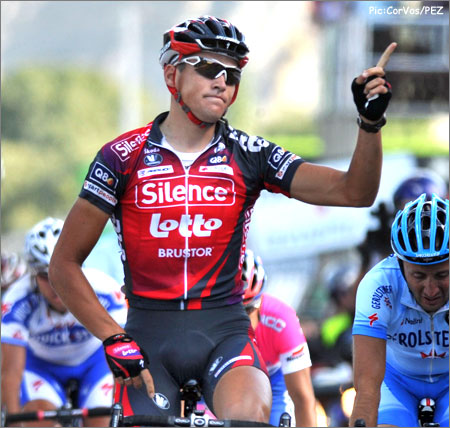 GVA probably won’t get a full on green light this time around, especially if Boonen is going as well as he says, but Gilbert should definitely have full go opportunities to play his trademark solo attack game (he and Sylvain Chavanel can duke it out for those honors). 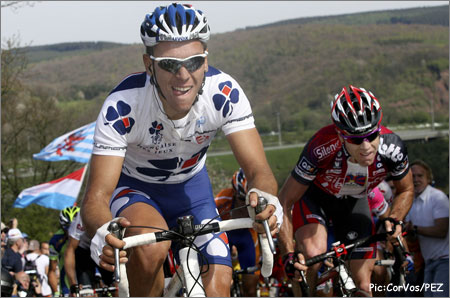 This Is Starting To Get Long
Wait, it got too long a long while back. Anyhow, a few more words and a couple of pictures and we’re going to call it a day, ok?

So, I haven’t mentioned the rest of last year’s podium in Stuttgart…you know, Misters Schumacher and Kolobnev. They’re both quick finishers and doing what they need to do at the moment, so expect to see them somewhere in the finale. Kolobnev sure seems to be quietly turning himself into a big game player too…anyone noticed that? 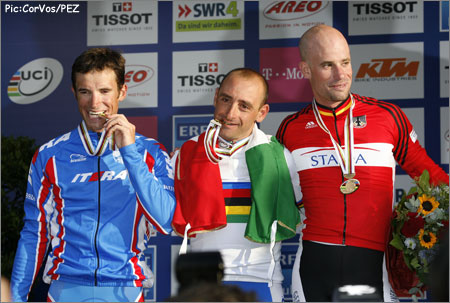 Then there’s Damiano Cunego, the sentimental hope. He won in Varese a long time ago (I think that’s right), and he’s had a pretty embattled 2008 season, so let’s give a picture and some well wishes to the Kid…cuz he can win come Sunday (so could pretty much the whole Italian team). 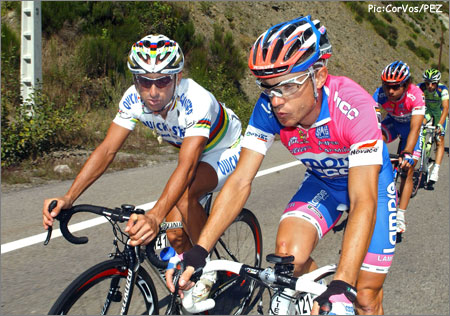 And so this preview doesn’t seem like it’s going out with a whimper, I’m going to make it go out with a painful bang: 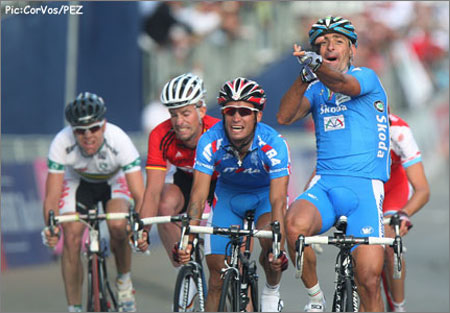 Unibet Probably Knows More Than Me…
…otherwise they would probably be broke.