Amstel Gold ’09: Beers Are On Sergej!

It’s the race that worries the pros with its innumerable traffic obstacles, narrow roads and short, sharp hills. The route that looks like the organisers gave Damien from ‘The Omen’ a set of coloring pens and asked him to scribble down the most diabolical course he could. Ladies and gentlemen, we give you the Amstel Gold Race!

It might be a devil’s course but it was God’s own delight for Russia’s Sergej Ivanov taking his career best win. Ivanov broke Karsten Kroon, Robert Gesink and the hopes of the host nation in a heart-thumping finish. 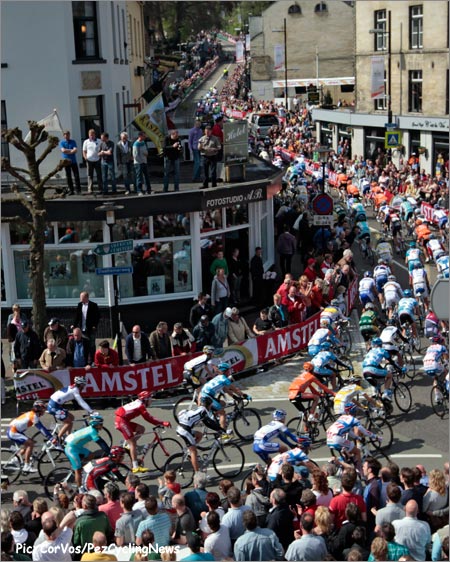 Three times up the Cauberg makes for a lot of hours to support the title sponsor.

Three guys clear and breathless as they screamed onto the bottom of the Cauberg, SaxoBank shutting down the front of the peloton which was mere seconds behind. You wouldn’t have laid a single Euro down on the outcome!

One of the hardest looking men in the sport, Ivanov was phenomenally strong today, and he simply ground out the uphill ‘sprint’ cracking Kroon with 75 metres to go. Gesink had started the race-winning move with 11kms to go and paid for it as his legs gave out on the Cauberg, but he held on for third. 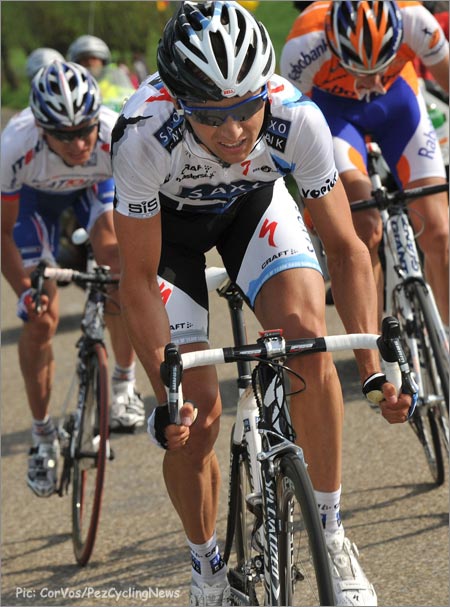 Kroon, Ivanov, and Gesink took this race to the hills.

Gesink had taken over where another young gun, Andy Schleck, had left off, just after the summit of the Keutenberg – climb 30 of 31 en-route to Valkenberg. Gesink flew solo, before Ivanov and Kroon caught him. The trio had a maximum 25 seconds racing home, but with every click of the clock the lead seemed to evaporate.

Just when it looked like the star-studded peloton would wolf them down, Ivanov gritted his teeth and pulled Kroon away. The Russian totally deserved his win – he’s been due a big one, but you gotta feel for Kroon whose career doesn’t yet have the Classic he’s capable of.

Unfortunately, another big story today is a major crash which saw SaxoBank’s Frank Schleck and Silence-Lotto’s Matt Lloyd leave the parcours in ambulances. Both riders were on drips as they were placed into medical vehicles.

Schleck was KO’d (a commotion cйrйbrale, as the French had it) and wanted to carry on – no broken bones or long-term damage thankfully. No news on Lloyd yet, but Pez’s best to both. 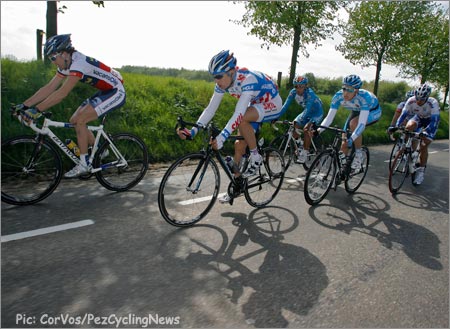 Those guys had gone from the gun, and I mean from virtually kilometre zero. They had over eleven minutes at one point, before the peloton – thanks to Euskaltel and Caisse d’Epargne – sorted themselves out. This was pretty much the day until the race ignited in the final hour or so.

Young Niki motored away but had a three-time world champ, Mr Oscar Freire (Rabobank) reeling him back, along with guys like Columbia-Highroad’s Marco Pinotti, over the Bemelerberg.

As this was unfolding, Bjarne Riis, the SaxoBank boss was on his cell phone, not leaving Frank Schleck’s side.

Just as the peloton caught the chasers (55kms to go) Freire and Agnoli (Liquigas) jumped again and joined Terpstra. Columbia’s Marcus Burghardt flew across to make it a quartet.

Freire definitely had ants in his pants as he couldn’t sit still today – any lull in the action and he was like a hyperactive kindergarten kid. Alejandro Valverde obviously didn’t fancy letting Friere out of sight, so his Caisse d’Epargne squad kept the gap to a miserly 20 seconds. 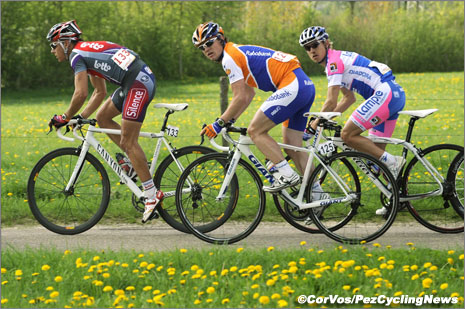 On the Lorberg (climb 25 of a hellish 31), the break is rolling through nicely, and the gap is still about the 20 seconds …. but Chris Anker Sorensen (SaxoBank) flies across the gap at stunning speed!

We get a reshuffle as Niki Terpstra’s legs explode and … it’s all together again.

QuickStep’s Dries Devenyns rockets off the front heading to the Schweiberg (34kms to go) and the peloton is strung out like an aged hippie. A huge pile-up with 32kms to go leaves an art installation heap of bikes on the tarmac and Johan Coenen (Topsport Vlaanderen) looking veeeery sore on the pavement.

Onto the Gulperberg (climb 26 on the route) Devenyns is joined by Koen De Kort of Skil-Shimano and Columbia’s Michael Rogers ….

Schleck the Younger is hard at it on the Kruisberg (climb 27) but doesn’t do any obvious damage. By the time the riders hammer into the Eyserbosweg, we get a rare sighting of the lesser-spotted Carlos Sastre! 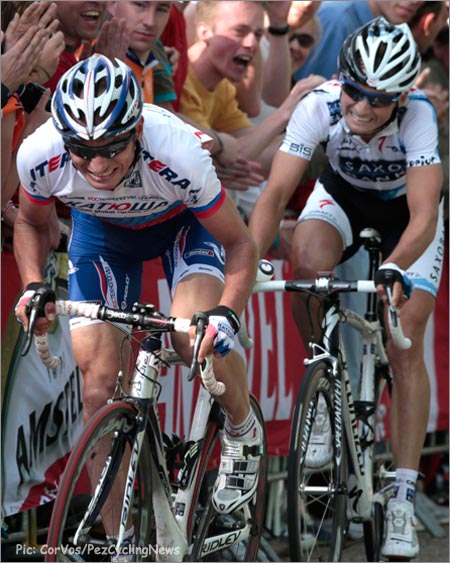 Ivanov and Kroon’s faces say it all.

Ivanov jumps on the descent and almost ends up in a hedge as he gets a corner very wrong. 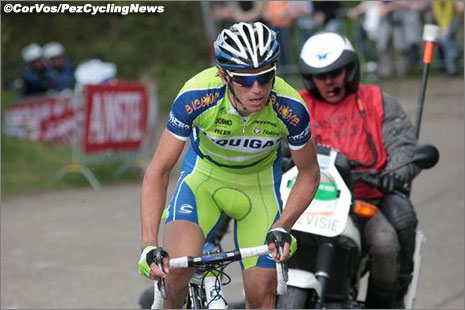 Roman Kreuziger was not a huge surprise out front of the race on Sunday – expect a lot more from him this week.

Climb 29 of the day is the Fromberg – not too many fans as the hill is barriered, but it’s Liquigas’s Roman Kreuziger riding alone at the front. Ivanov chases, countered by Nibali who can’t/won’t work and gets a bit of a bollocking from the older Russian. Lampre are working for Cunego to bring them back. 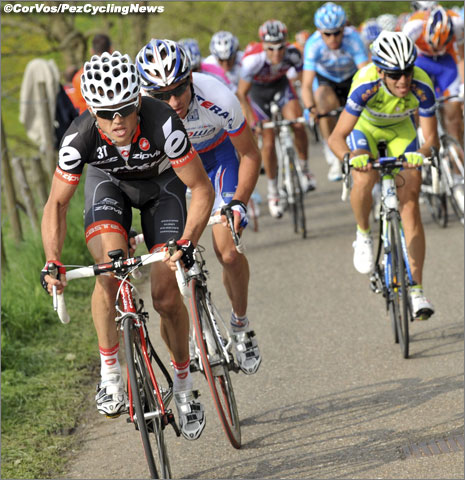 Gerrans led the charge up the penultimate climb of the Keutenberg.

Onto the Keutenberg for climb 30 and Gerrans leads the capture of Kreuziger, but Ivanov is still up front and attentive. Valverde, Sastre and Davide Rebellin are all struggling to hold the pace! 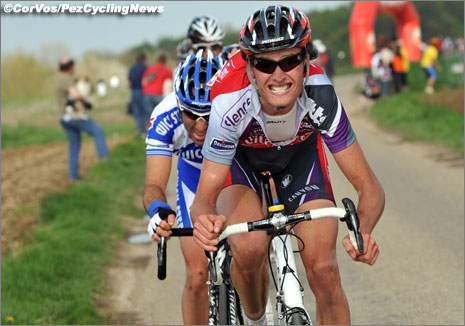 Van Summeren was once again a huge force in the day’s racing – talk about a different field of play though: Roubaix vs. Amstel.

Then it’s time for Gesink to enter stage right, with Ivanov and Kroon making the race-defining break. Johan Van Summeren does a heroic job to pull Silence-Lotto to within arm’s reach – give the guy a leadership role next season, guys! 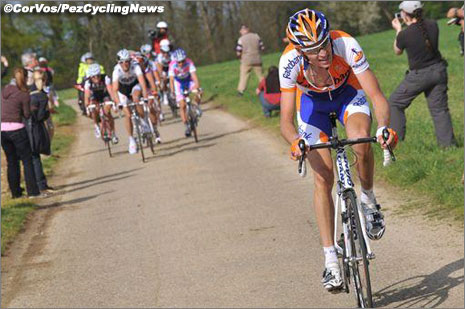 Gesink was strong, but couldn’t hold onto the forcing of Kroon and Ivanov in the end.

We’ve got a bit of parrying and stretching as Kroon and Ivanov try to break Gesink, but the three stay clear to fight out the win. 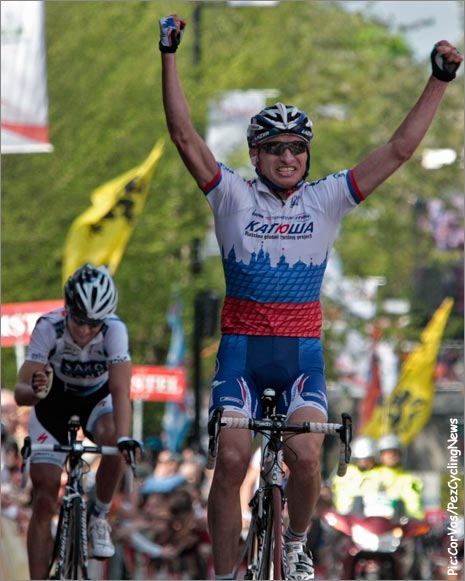 The last 20kms definitely made up for a fairly routine first 240kms and when a Classic finishes like this, you can’t really complain. Ivanov said it was his dream race and the biggest win of his career, and bettered leading out the sprint for Michele Bartoli in 2002.