Stage 1 was supposed to be a field sprint! Cavendish, Boonen, or Hushovd were supposed to finish the day with the leader’s jersey and the big question was whether Cancellara would defend his lead from the sprinters. In the end, nothing went according to the script. Nothing. 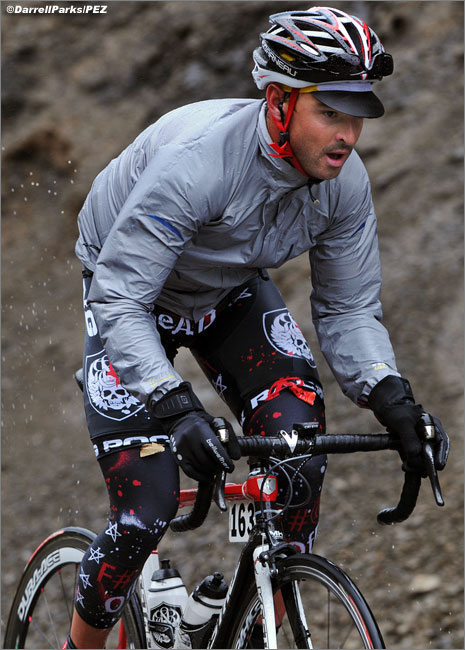 Even the early break didn’t follow the rules: Rock Racing’s Francisco Mancebo attacked almost off the line, BMX-style, but when two other riders, Tim Johnson (OUCH) and David Kemp (Fly V), tried to bridge, he never looked back. When they finally did make the juncture with the steamrolling Spaniard, they were dropped not long afterward as the former 4th place overall at Le Tour rammed it into his big ring, put on his black belt, bowed solemnly, kicked the two in the throat, and left the English-speaking duo gasping for air. This was a Spanish party today – no habla Ingles. 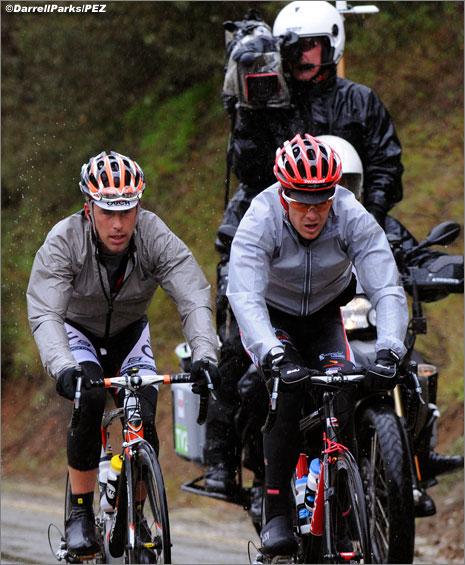 The poor, beaten duo of Kemp and Johnson enjoy some peace after being left for hypothermic by Paco. 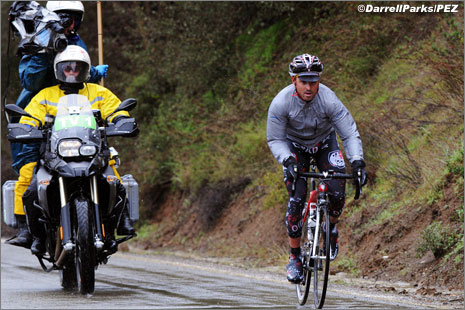 There’s no ‘I’ in group. Today is all about me, anyone who thinks otherwise will suffer greatly…or look ridiculous when I dust em in the sprint.

The next departure from the script is when they just threw the damn thing away entirely: race leader Fabian Cancellara abandoned at the first feed zone. Yep, big, strong, thundering Fabian Cancellara was laid low by a fever overnight and figured it better to call if quits early than to risk anything worse. Probably a smart call, but still disappointing, and yet another point for chaos in the Nothing-Went-To-Plan-Stage. 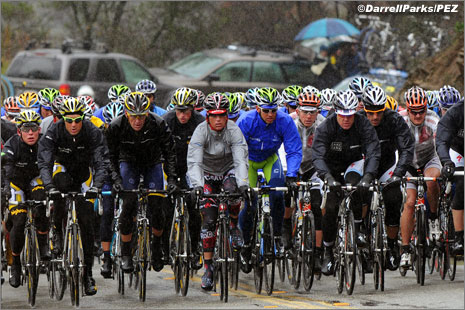 After that? Nobody knew quite what to do. Well, they did, they all looked to Astana. ‘Hey, uh, guys, yeah, there’s a break up the road and, Levi, yeah, you’re the leader on the road, so how about you guys, uh, pick up the slack? I’m going to hide behind a wheel now and hydrate on road spray and try to keep warm. K bye.’ So it wasn’t quite like that, but close. 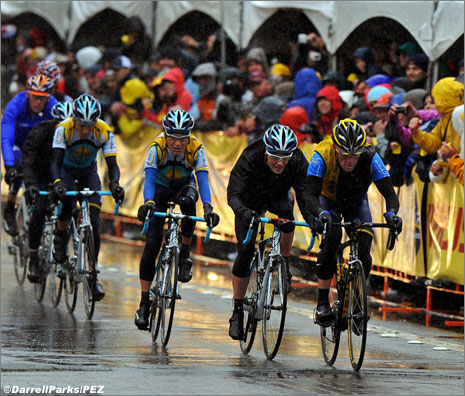 Astana got their working orders for the day and everyone chipped in – Tour winners and hopefuls alike.

As the slings and arrows of an outrageous day took their toll on the field, an all-star team of a select group had emerged to (theoretically) chase Paco Mancebo down like the bloodthirsty killer that he was. A group of 19 raised their hands and said, yes, we’d like to contend for the overall and get home a few minutes quicker. By quicker, they meant that they’d be just fine with Astana shouldering the load, and by Astana, I think they just wanted to see what it looks like to have Levi Leipheimer and Lance Armstrong swapping pulls. Can’t blame em for that. 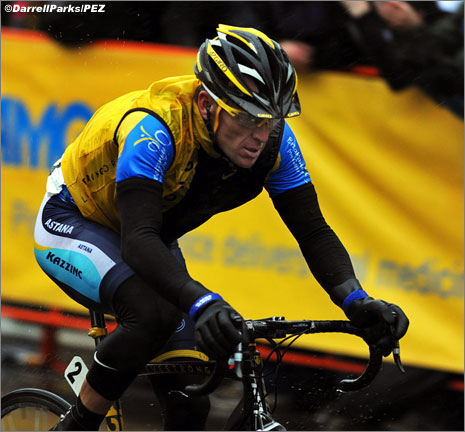 Apparently, at some point, the bike racing virtuoso Chris Horner said, ‘Uh, yeah, something doesn’t sound right to me. My Bat senses tell me that there’s a Spaniard with English-speaking blood on his blade up ahead. Get out your oars men, it’s time to row!’ And row they did. Astana, each and every one in the tiny little lead group, pulled out their oars, shifted into their 11s, and caused pain, much pain.

Thankfully, the script has been torn, crumpled, and now sits rotting in the corner at this point, so the following isn’t quite so frustrating. Race organizers couldn’t decide when to take the GC time – over the start line on the first lap of the finishing circuits or at the actual finish. No one was sure for a long while and by the time it was decided, Astana got the unfortunate news report that they had 15km to chase down the Spaniard on the motorbike, who was waving the Bowie knife and kicking down street signs willy nilly as he churned up pavement like a RotoTiller in mud. 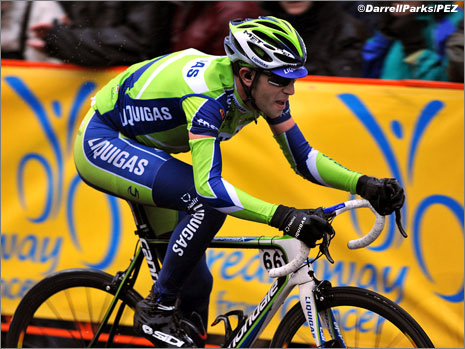 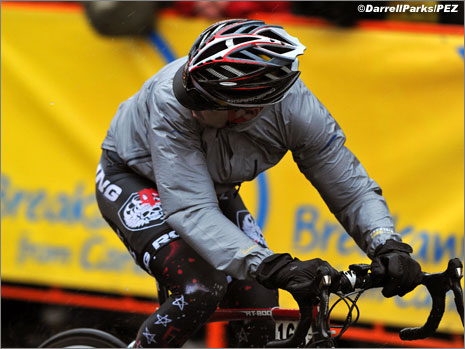 Oh, silly little boys, do you really want to come to fisticuffs with me? I already have the collective field’s scalp in my back pocket along with my two former break companions.

It still makes sense in some way – break up the road, one guy drops everybody, rides away, big team sets up the chase, chase happens, chase wins, status quo antebellum. But again, today wasn’t one of those days, nothing went right – and two riders managed to jump the Viking Ship Astana. QuickStep’s Jurgen Van De Walle and Liquigas’ Vincenzo Nibali leapt across the gap (not together of course, that would be much too easy) and joined the Spaniard with the insatiable bloodlust at the front.

Now, at this point, it looked like Mancebo had about as good of a chance at victory as I do overall honors at the Tour of California. Nibali is decently quick, Van de Walle isn’t a putz either, and neither had spent over 100 miles out front paddling upstream by themselves. Not to mention the fact that this is Francisco Mancebo we’re talking about – you might recall his heyday years and an impressive ability to unsprint. 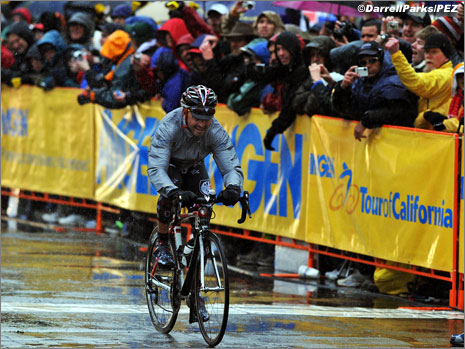 Drops? Why would I need drops? I’m a human motorbike.

For the nth time, that’s why the following makes sense – because nothing makes sense from Sunday’s festivities: Francisco Mancebo not only won the sprint, he dusted them, he stomped on their slight backs and gave them a lovely chiropractic adjustment.

And for one moment, allow me to be serious: this was a beautiful win. It was one of those wins where you can feel the years of frustration and doubt and anger and you can see it come billowing forth in one moment of absolute ecstasy. The look on Mancebo’s face was pure. I’m not here to add my opinion to whatever Puerto is or was, but he served some kind of suspension in cycling purgatory, rode for nondescript teams, and now rides for a Continental team in America – his punishment continues. He’ll probably never get a chance at the Tour again. So for this one moment at least, Mancebo put one over on everybody, stuck it to the best team in the world, and left us all scratching our heads. It was beautiful. My hat is off to Senor Mancebo. I hope he defends his lead. 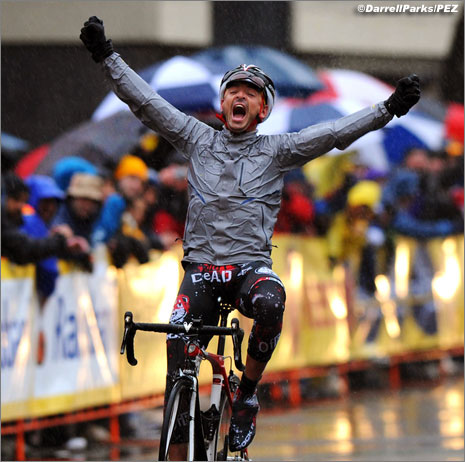 And back to the outlandish recap…

Mancebo dusted his two late comer breakmates, and at this point the clock was supposed to start ticking, but if you’ll recall, the clock stopped ticking on the first lap of the circuits…so there was no more tickage and everyone else just rode on home, miserable, wet, and pissed off. 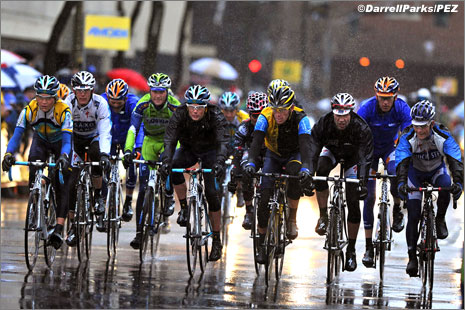 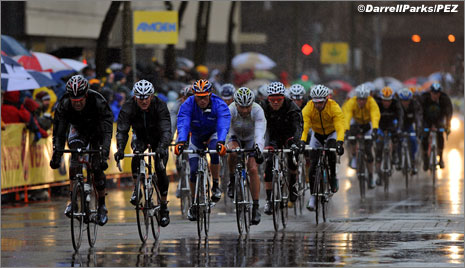 The even more bummed out peloton.

The best part about Van de Walle and Nibali’s great exploit to bridge the minute gap? THEY DON’T GET CREDIT FOR IT ON GC! Tell me how much sense this makes: they finished WITH Francisco Mancebo…as in, they finished 1:07 over the Astana-led group, but on GC, they’re over a minute behind. This is actually happening. Ben Jacques-Maynes whined about what happened to him two years ago on this same finishing circuit when he was deprived of the Yellow Jersey for a day, but nothing, absolutely nothing is more wrong than what happened to Van de Walle and Nibali. Why? Because Nibali would win the Tour of California. No question.

Instead, Francisco Mancebo has a commanding lead in everything at this point – over a minute on general classification, more than double the next guy on points, and nearly double on KOM points. 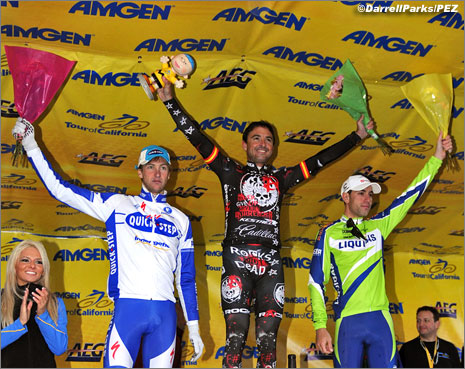 What happens now? If this is the Paco Mancebo of old, they (as in Astana) are going to have a helluva time trying to recoup the minute on general classification. I still don’t think that Mancebo will present too big of a difficulty for Astana. If anything, the mishaps of Stage 1 should lead to some good racing – Astana will not have a lead to defend and will have to be aggressive…none of the classic Postal stranglehold nonsense, hopefully just pure, old school fury = attack like hell.

California PEZ: Is this Armageddon?