After yesterday’s melee of a stage, some semblance of order was restored to the world of the Tour of California. The reigning King returned to his throne, the now traditional rain continued, and justice was done to a tough Spaniard who rode with the strength of a small army yesterday, but the piper came calling this afternoon.

Yesterday was the first real selection (a wee bit of a surprise) of the Tour of California, but it was today’s stage that was supposed to provide the riders with the first big test. The stage did not disappoint, even if the weather was once again unruly at best. 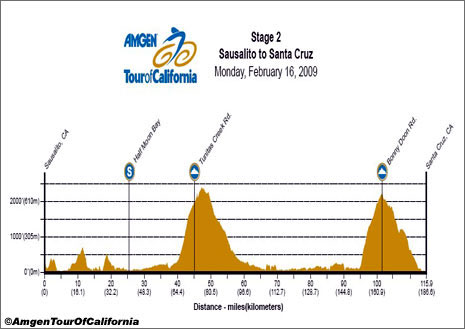 Yes, there were a few ascents to be taken care of before hitting the finish line in Santa Cruz. 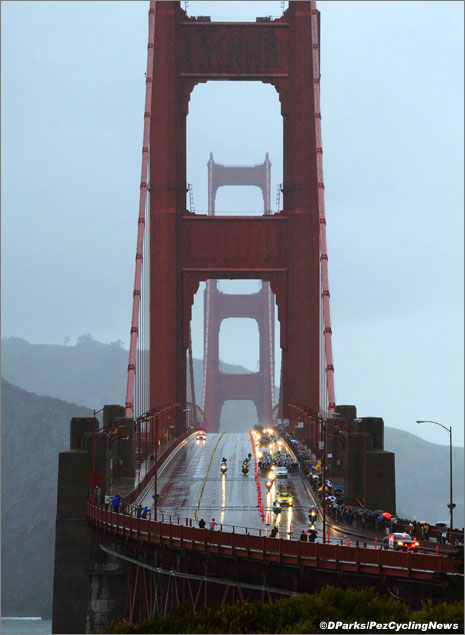 But first? A trip over the Golden Gate Bridge in the wee early hours of the morning. 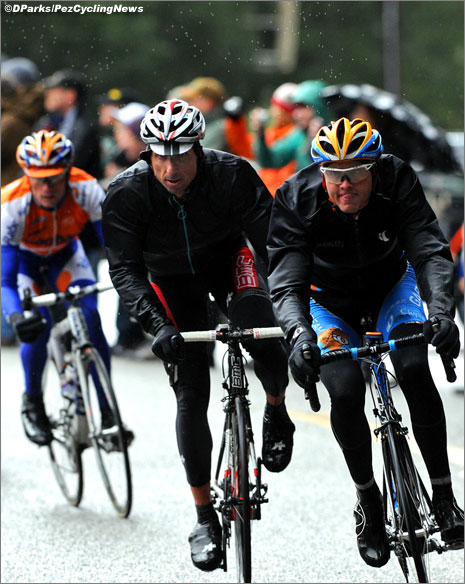 The break went early. It was a healthy-sized break that actually had a chance in the end. Well, obviously it had a chance – Garmin’s Tom Peterson was in it from beginning to end. 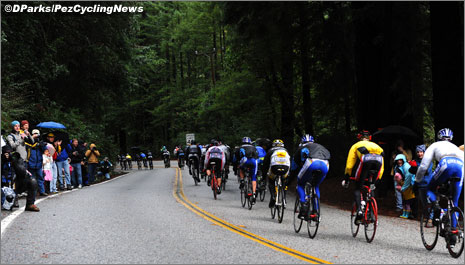 Yet another hilly stage…that normally means descents too. 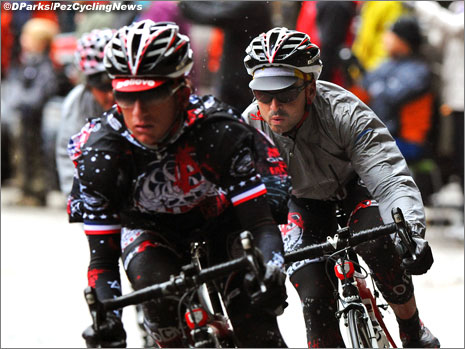 Francisco Mancebo put up a game fight, but he had to have known all along that there would be some bills to be paid today. He duly paid his taxes and managed to keep himself within a minute of Levi’s overall lead. Not bad. I can say, without a doubt, that I’ll take Mancebo’s win ANY day over Peterson’s. At least Mancebo looked happy. 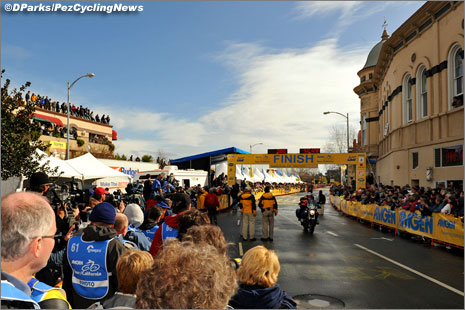 The crowds were once again big… 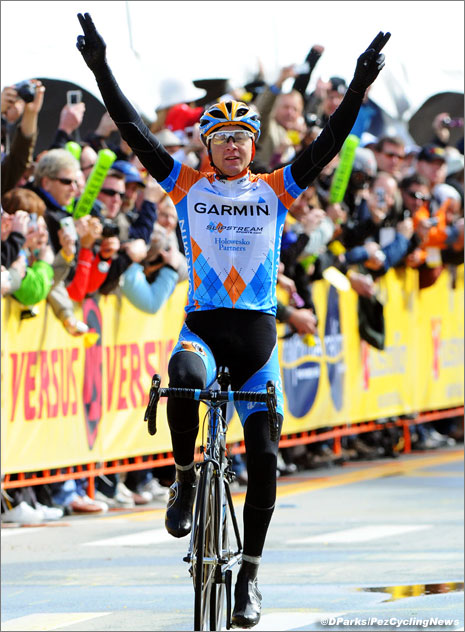 Tom Peterson was the sole survivor of the early break. He bought a ticket aboard the Levi Express just in time to hop on the Little Engine That Will Win The Tour Of California. Peterson enjoyed a free ride to the line and only had to raise his arms to make it official. 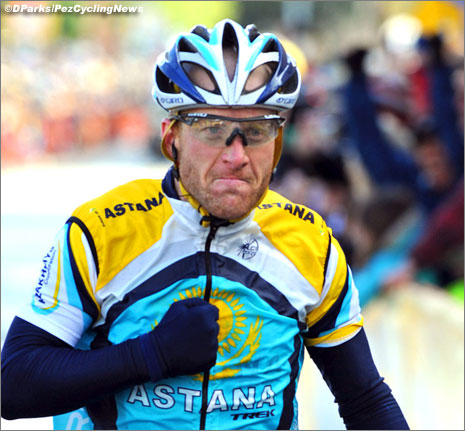 Levi wasn’t too concerned with Peterson. He celebrated like he had won anyway. 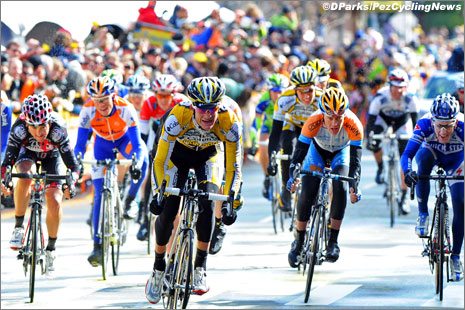 Michael Rogers led home the elite chase group to take 3rd on the day and move into 2nd overall. 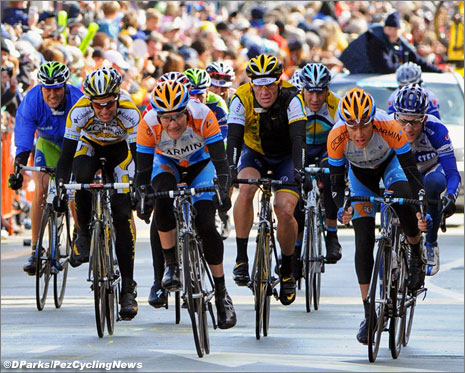 It wouldn’t be a race report without a picture of Lance – look, there he is! 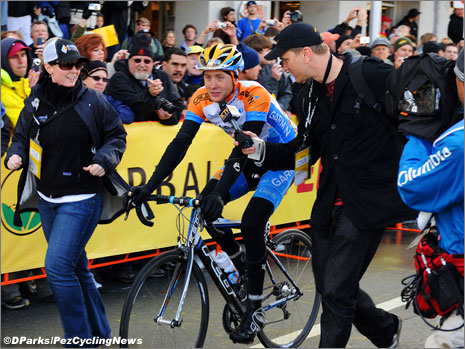 Peterson was mobbed with well-wishers and interviewers and touts as soon as he crossed the line. 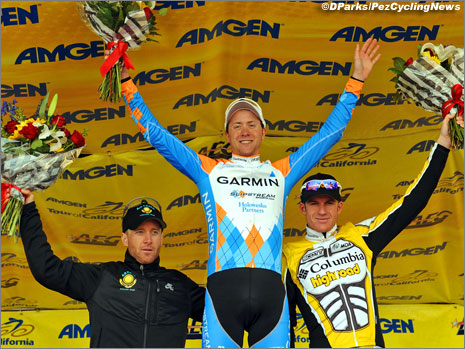 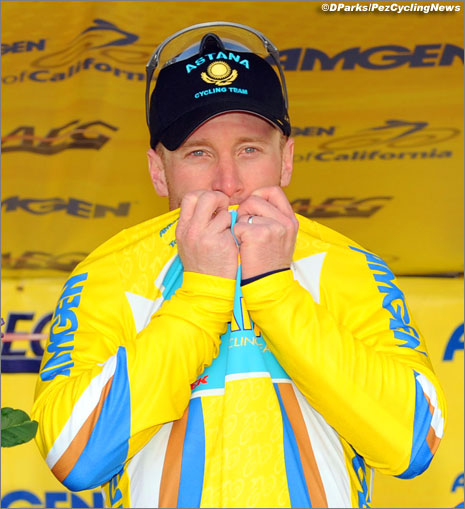 Levi doesn’t need any kisses from Podium Girls – he does it just fine all by himself thank you very much. 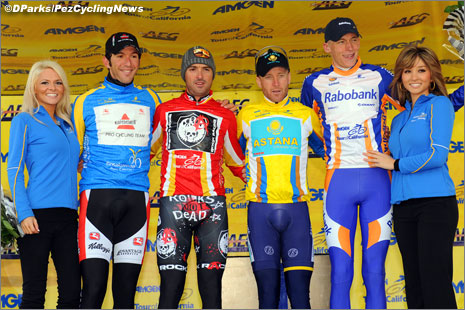 The jerseys after Stage 2… Ben Jacques-Maynes is in the Most Courageous Rider Jersey, Mancebo still has the Points and KOM, Levi has Yellow, and Gesink has the Best Young Rider tshirt.