Greetings from a horrifically wet Sausalito, California, where Pez has just bade farewell to the soggy, pensive peloton. Pretty grim here, folks, pretty grim indeed. Click this link and come in from the rain, Pez readers, and here what Lance, Jens, Tyler, and more had to say before another punishing stage in the Amgen Tour of California.

Yesterday I sent a text to Chris Horner and asked him to describe his terrible wet day in the main chase group in one word. His answer: “Blue collar!” Way to improvise, Chris. And come to think of it, that was blue collar stuff. Back breaking field labor type shit.

To say the weather is adverse so far in this tour would be a vast understatement. The alarm at 5:45 this morning brought us sights once again of dumping rain. I guess I can’t really find the words to accurately describe the water in the air, and I’m from Oregon. I stuffed all of my wet belongings back into Pez One, and headed south. Here on the bay the wind accompanies the spit, having it come down sideways at times. Today the peloton went over the Golden Gate bridge, but Mother Nature clearly doesn’t want this one documented. As I type this report this from No Name bar on the strip in Sausalito, the rain is coming in sheets outside. The only question being asked among the locals is “staying dry?” mixed with words of sympathy for those poor riders. 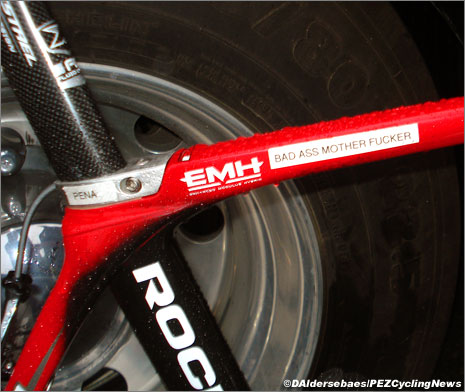 We began our day with a white knuckle drive from Santa Rosa down to Sausalito, hydro planing like a mofo down the 101. It was insane and nerve wracking. We made it just as the team vehicles arrived, so I was right in the thick of it.

The weather being what it was, the fans were still out in impressive numbers. Many an eye was poked by many an errant umbrella as fans whipped around to catch glimpses of their favorites. 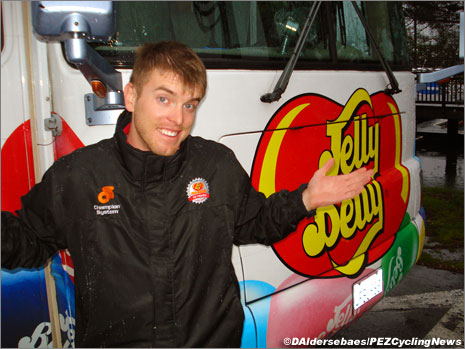 How about that rain?

I ran into Nick Reistad of Jelly Belly first. We chatted for a few minutes about the weather since it was the most pertinent thing to the race, but this picture pretty much says it all.

It was then a quick word with Jens Voigt who, when asked how much fun he was looking forward to having in the slog, asked me, “Are you mentally sick?” Probably, Jens, thanks for the word and have a safe ride. “I try! I try!” Always a good interview. 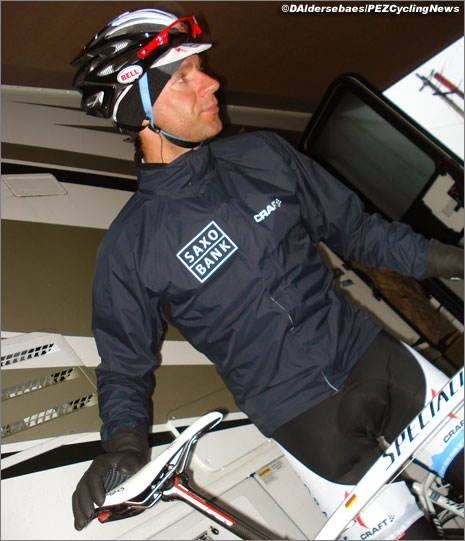 Are you mentally sick, Dave?

I got two words with Matty White, DS of Garmin/Slipstream outside their RV. “It’s one day I’m really happy not to be on the bike!” he said with a laugh. And he was excited to be going over the Golden Gate, which he had never even seen before. Had the weather been clear one could easily see it from Sausalito’s bay, but given the conditions, Whitey was going to have to wait until driving over it to see it. 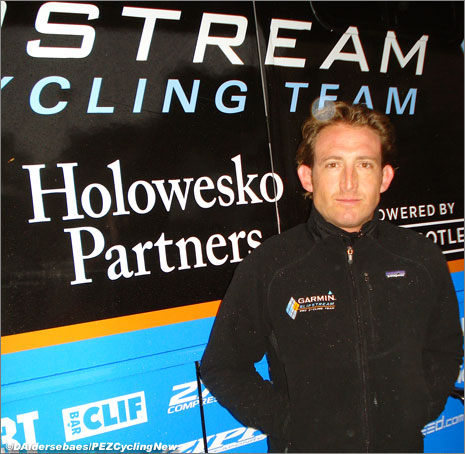 Matty White was a happy man to be in the car today.

It was then a quick chat with a bundled up Tyler Hamilton, jubilant that Mancebo had the jersey and the team was ready to defend it. “We’re really motivated to keep the lead today. We have a little bit of time in hand, so we’re going to have to ride today.” I then informed him of the status of my former neighbor and his former teammate, Doug Ollerenshaw, who is now enrolled at Emory University, and most likely pretty happy to not be riding a bike in this slop. 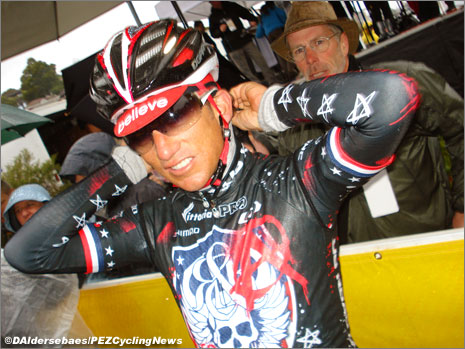 Then by some dumb luck I ended up standing on the start line next to Lance Armstrong who gave me a few words. There’s some video of the interview HERE, but it went a little something like this. How much fun is it to race in this weather. A wry smile was followed with “To be honest, it’s really not that much fun.” How cool is it to be going over the Golden Gate bridge? A short deadpan face, and another smile, then “Literally – cool. But it’s good, it’s historic for cycling and for the Tour of California.” So are you guys going to make it hard on everybody today? A knowing smile, then “Maybe at the end, that last climb is going to be hard.” 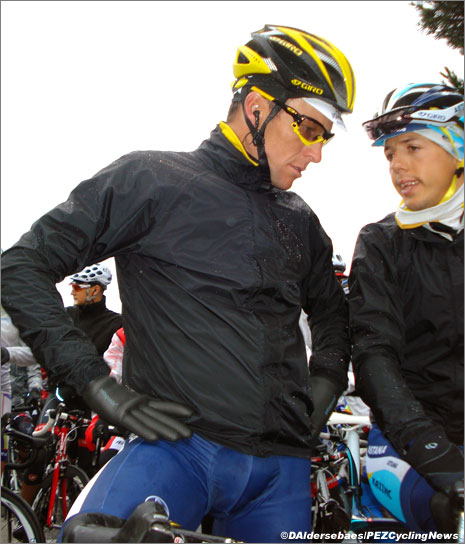 Question of the day: what are those gloves that Lance is wearing?

After three really wet but exciting days on the Tour, I bid you a fond adieu. The Pez himself will take over from here, and I go back to the day job. Thanks for reading, and nice to meet so many Pez fans out there. It was a soggy sojourn, but one I was very pleased to be a part of. Send a note to [email protected] and say hi!