The Prologue has come and gone, with Swiss sensation Fabian Cancellara in yellow at the end of the day. Pez was on hand at the road side to bring you the under cover goodness you’ve come to expect. How are the locals here in the Sac handling it? Where can you get the good bacon? Where’s the best riding? Was it going to rain in buckets? Click, and come on in, to get all the inside reporting from the scene…

Having spent the night before in Sacramento talking about the finer points of cycling with a few friends at a local fish house over a few beers, it was time for the rubber to meet the road, and for pedals to be turned in anger. The Amgen Tour of California was to be underway in earnest, and I went deep into the mainstays of Sacramento to get the citizens’ take on the race, while also pre-riding the Prologue course with a few hundred other cycling enthusiasts. 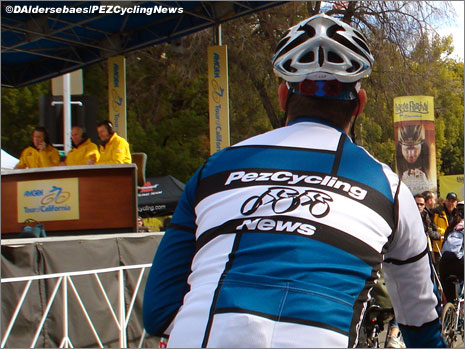 Before the wheels turned, it was about fueling up at the local, legendary, Jack and Denny’s breakfast house. Made originally famous for their burgers, their breakfasts are also formidable, and it was advisable to fuel up for the big day ahead. After bacon, eggs, and 43 gallons of coffee, I kitted up and set off to pre-ride the Prologue. Thousands of folks on every manner of bicycle made their way around the lovely state capital building and Pez joined the fray. Riding by Paul, Phil and Craig, I’ve since determined those three guys are following me. I’m getting slightly worried.

After a bit of previewing, we took to the start ramp. May as well see the chute for ourselves before the big hitters started firing. Getting a start assist from the technical director of the race, I rolled down the ramp and turned the pedals a few times before turning around. A race spectator told me I should have a little more zip, and that man is absolutely correct. 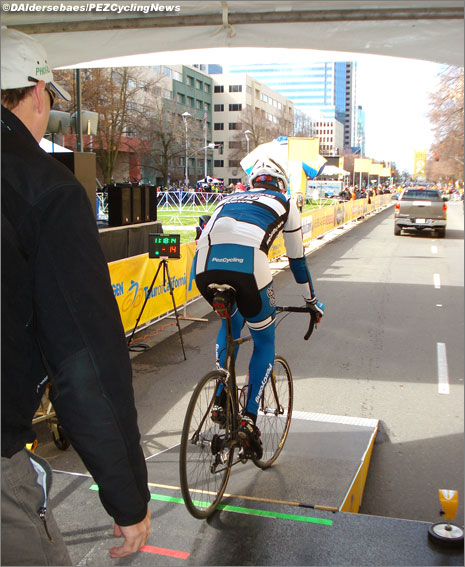 Then I rode the 2.4 mile course in full, taking in the sights and sounds of the crowds, already thick with hours to go before the start. Clearly the “Lance Effect” was in play, as crowds almost doubled the size of last year around the course. There was much love for the new Pez kit, as fans said many hellos. Thanks for the support out there, folks, it’s great to see you all. 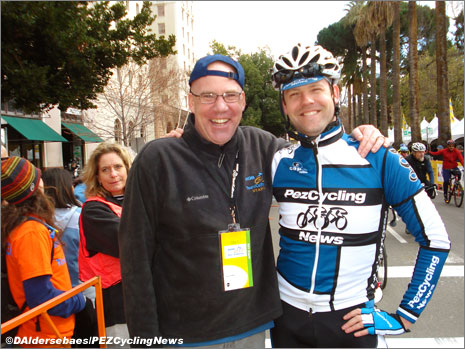 A quick chat with the voice of American cycling, Dave Towle, had us stopped at the 500m to go mark for a bit. Dave loves Pez, and Pez loves Dave. It’s all so incestuous. Dave went on to whip the crowd into a frenzy, as the world’s best riders hurtled around the short course under waves of loud cheers. 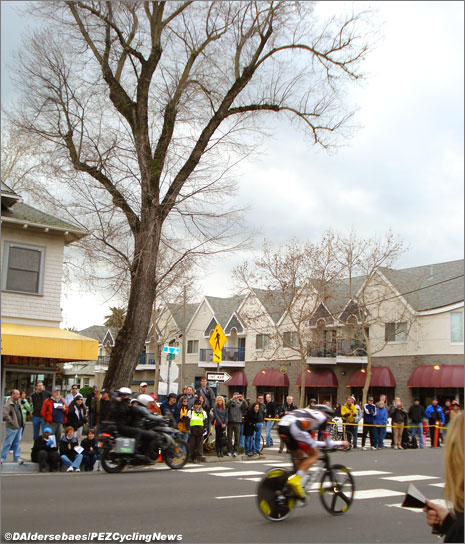 Moving about the 2+ mile course in downtown Sacramento, the excitement level was clearly at a fever pitch. The entire course was lined with people, sometimes 10 deep. Folks were ready to get the first bullets fired in this war. Every racer that came through was showered with cheers and cowbells, as the greater Sacramento area had turned out in force to see the race.

The skies above threatened as the temps hovered in the high 40’s, but aside from 3 or 4 seconds of rain, the day stayed dry, which differed from the forecast, luckily. 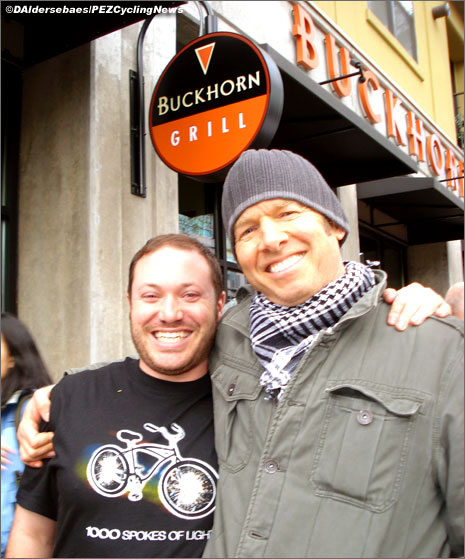 As Lance Armstrong hurtled around the course to the deafening cheers of the thick crowds, I had set up shop at the Buckhorn Grill, along with fellow journalist David Watts Barton of SacramentoPress.com, and Brian Fischer of Bikeramento.org. Brian is making Sacramento more bike friendly, and that’s just plain good for everyone.

The crowd loved the latter part of the race as the big names made their way around. Cheers just got louder as each rider plowed past the shouting masses, like a rock band’s encore drawing out louder and louder support. One thing is for sure: the race is a hit with the public, and we’re only a little over 2 miles into it. This is just going to be insane.

Stay tuned to PEZ as we’ll be on hand at the start in Davis tomorrow, riding some of the course, and in the finishing circuits of Santa Rosa. You can’t find this kind of coverage anywhere else, can you?

California PEZ: Is this Armageddon?