If you’re not excited about this year’s Tour of California – find a new sport. The field is arguably the best we’ve seen on American soil, the start list would impress even the ASO, plus there’s the bonus of a few riders that won’t be allowed into Le Tour. It seems like every star is coming, and California is greeting them with the best course in four editions. Be excited.

I’m not going to focus too much on the course here, because there’s much too much fun to be had looking at the favorites. Let it suffice to say that the route is new and it’s fun – some pieces of old have been mixed with the new and it looks like the stage will be a magnificent one for the stars to show the work of a long winter. 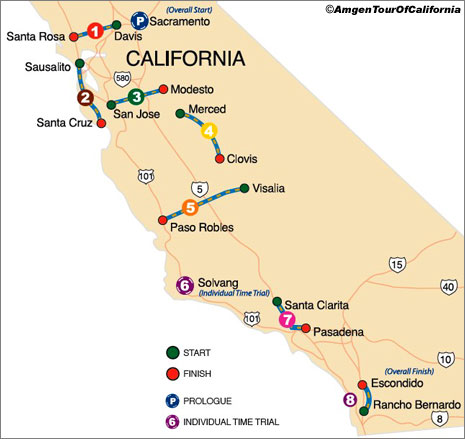 The stages will be tough, very tough some of them, but there is still no mountaintop finish and the closest mountain to the finish line is still over 15 miles distant. What does that mean? More aggressive racing, more small group finishes, and a huge weight on the shoulders of any hopeful in the time trial. You’re not going to ride away into the wild blue yonder, gain lots of time, and fake it in the time trial. The winner will lose little to no time on the tough days, hopefully pick up a few bonus seconds, and then hope to blow the doors off everyone else in the time trial.

The Overall Contenders
The list of this year’s overall possibilities is quite long. The first three years seem almost simple compared to this year’s edition. The options are seemingly endless. I’ll start at the top of the last two years: 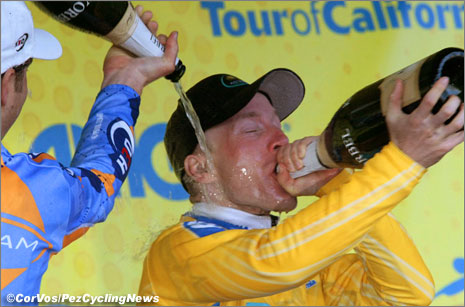 Levi Leipheimer. Levi has won the Tour of California two out the three runnings of the event (Mr. Landis took the first). He wasn’t too terribly hounded en route to win #2 last year, and without a doubt, he is the favorite going into this edition. 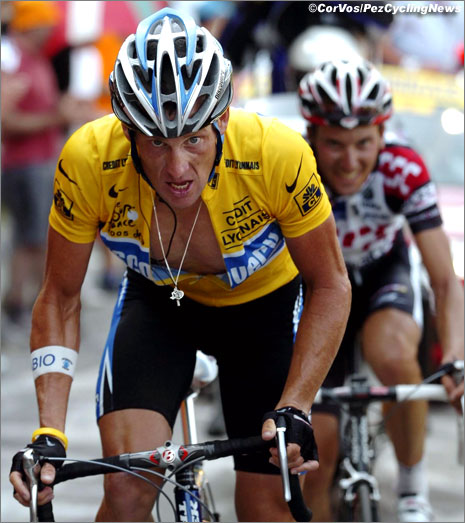 Let’s just go ahead and get the really big name out of the way… Snapping at his heels within his own ranks? None other than Mr. Tour de France himself, the returning great: Lance Armstrong. You can be very assured that Armstrong will be firing on every one of his eight cylinders come Valentine’s Day. The Tour Down Under was a nice appetizer, but California will be his first opportunity to show/prove/confirm that he can race and win at the top level. 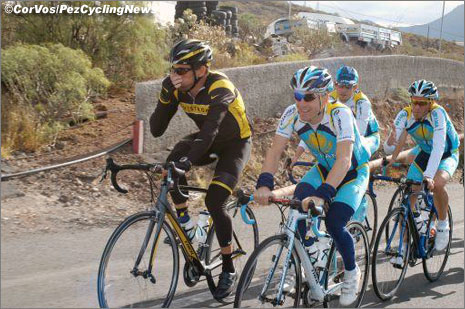 I don’t expect there to be any infighting on Astana – Lance doesn’t need to win to show that he’s still the Man. A Lance unshackled by the burden of team leadership could be an amazing thing to see (think of the Tour Down Under and Lance’s penchant for attacking and riding breaks). It could free Levi as well. If anything, the combo of two ultra strong racers will be welcomed. I’m looking forward to it.

After the Astana Duo, the ranks of hopefuls really get thick…ok, getting excited, deep breath, calm down.

Another returner who has a ton to prove? Ivan Basso. Basso is making a comeback that could actually be put in the same league as Armstrong’s. If anything, Basso has more resting on his shoulders: Lance has nothing to prove to anyone, whilst Basso has the gigantic King Kong of a monkey of doping to enjoy. Basso has a ton to prove and seems like he’s doing everything right en route. Like Lance, California will be our first sighting of Basso in a big money situation in a long, long while. Again, be excited. 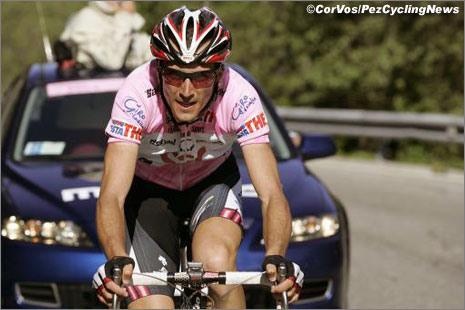 That could be a potential Tour de France podium (well, for 2010 for Basso), and we still haven’t seen the likes of the riders that Garmin and Columbia are throwing at this race. Let’s start with Garmin. 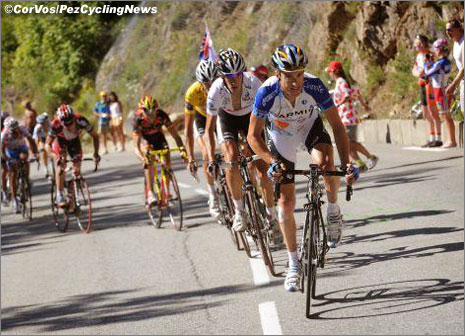 For Garmin, Christian Van De Velde and Tom Danielson will pose two big threats to the overall. VDV shouldn’t be in top condition just yet after what appears to be a slightly slower winter than usual, whereas Danielson is purportedly ‘chomping at the bit.’ Everyone: team and media alike seem to be singing the praises of the Great White Hope. Perhaps 2009 will finally be Tommy D’s year to show every bit of his vast potential. I’d love to see it. There’s nothing worse than the spectre of talent unfulfilled. 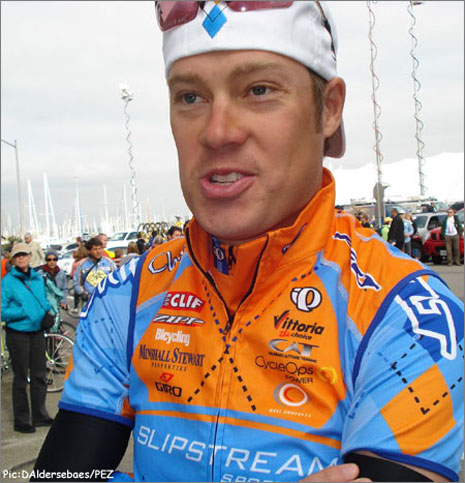 Saxo Bank will be heading to California with a Tour de France battalion: the Schlecks, O’Grady, Cancellara, Larsson, etc etc. Depending on the winter for the Schlecks (we’ve seen nada of them so far) they could be contenders or just trainers. Fabian Cancellara could be an interesting study – he continues to grow as a climber and after last year’s Beijing performance – will it be so terribly long before we start to consider Cancellara for the overall at some big stage races? At the bare minimum, we’ll be counting on him for some time trial fireworks – it’ll be our first real comparison of a Cancellara in his prime against Mr. Armstrong (of course the two have gone head to head before, but Cancellara was nowhere near the rider he is today). 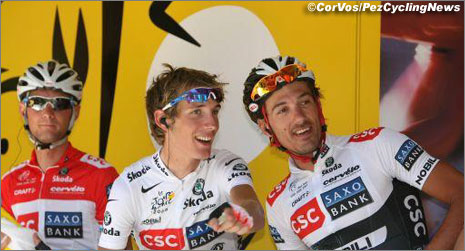 Looking for a team that has some big eyes on this year’s Tour of California? Columbia. Columbia is sending the best of their best to take stages, time trials, overall, anything and everything they can possibly get their hands on. Cavendish is assured of a stage or more, whilst the possibilities for overall success rest mainly on Thomas Lovkvist and Michael Rogers’ shoulders. 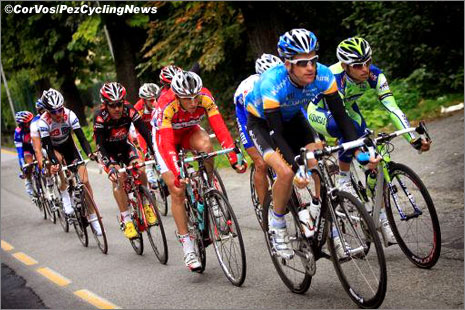 Rogers is returning after a dismal ’08 campaign, but appears healthy, motivated, and ready to go. Expect to see him in a big way. PEZ-Man Gordan Cameron reported to us a few weeks ago that Lovkvist was in howling good form already – so this could be a big opportunity for the youngster to shine on the big stage. 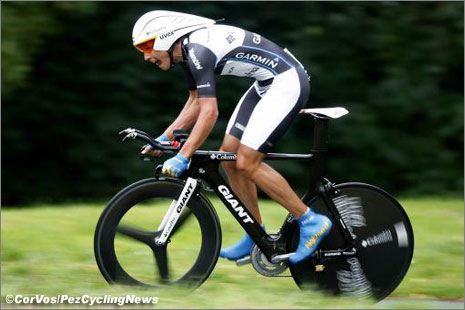 Rabobank is sending a solid squad headlined by Oscar Freire and Robert Gesink. Gesink was stellar in last year’s Tour of California, and we’d expect nothing less from him this year. I do not see overall victory going his way though – there are still too many superstar time triallists that can climb at least as well as he can. 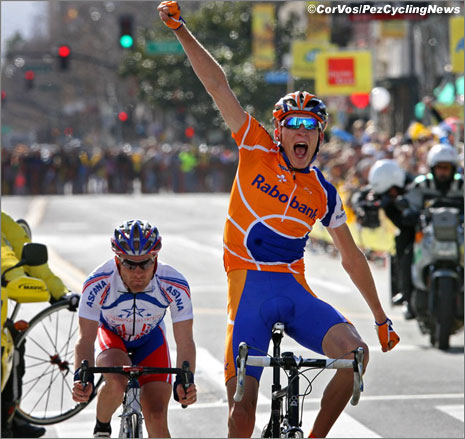 I’m reluctant to name Carlos Sastre as a favorite, but he’ll ride well and perhaps the superstar start list might see an exceedingly motivated Sastre. My bets are that he’ll fare well, but we won’t see anything near a Tour de France winning Carlos Sastre. 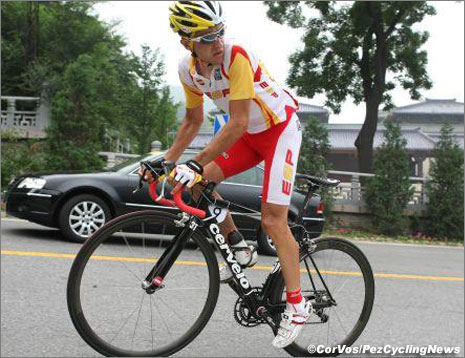 And finally…I would be remiss not to mention the Tour of California’s first overall winner: Floyd Landis. Landis is of course returning after his two year hiatus following his ‘victory’ at the Tour de France. Whatever you think about that Tour or his guiltiness or not, do remember that Floyd was a man on fire in 2006: he won Paris-Nice, Tour of Georgia, and the Tour of California. If he’s back at anywhere near his former capacities, he will be a man to be reckoned with. I hope he puts on a show. 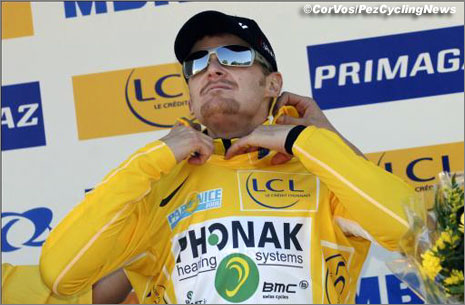 In Conclusion
The race will go to a guy that can time trial and climb (duh), but moreso here than normal: the time trial will be absolutely imperative to overall success. Lagging a little bit behind on the climbs will be ok as long as the time losses on the climb can be recouped in the miles heading into the finish. Losing 30 seconds over the top of any of the final climbs will not be a race lost…losing 30 seconds in the time trial (or much more) – will.

With that in mind, I’m going with: