The overall hopes of the GC boys should keep us waiting in eager anticipation for a few stages here and there, but will generally just have us pulling out our calculators to figure out time gaps after the time trial. Luckily, we get NINE stages, which means nine winners – perhaps a rider or riders will take more than a stage, but everyday we’ll be treated to something special. Let’s take a look at the guys that are gunning for stages.

It’s not coincidence that some of the best sprinters on the planet will be clipping in for the fourth annual Tour of California. They get an opportunity to show off some fine early season form and assemble some big time mileage with eyes on the end of March and April…and later of course.

Without a doubt, two names reign on top when the word ‘sprint’ comes up heading into California: Tom Boonen and Mark Cavendish. Both are proven winners at California, and both are already showing the good stuff early in the season. Cavendish finished the Tour of Qatar 2-1 head to head against Boonen. That’s a bit misleading though. 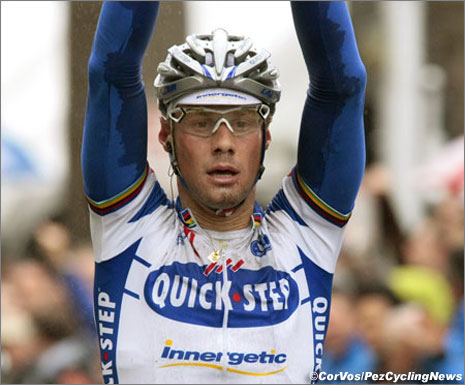 Pick your missile: Boonen or…

Boonen had every opportunity to slam the door shut on Cavendish as he came up Boonen’s inside on one of the stages, but oh so nicely left it open. That was nice, but you Cav can’t be counting on that too often. The other victory for Cavendish? Boonen didn’t contest the sprint. It’s hard to say – Cavendish is definitely the better natural sprinter and is probably the fastest man on the planet at the moment, but… Boonen is pretty damn fast too. 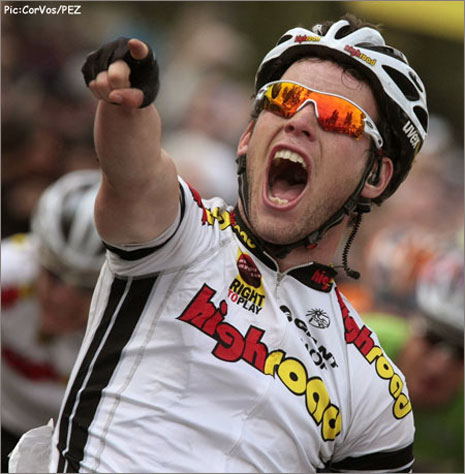 Expect the two to put on quite the battle at least a couple of times and start to get excited about Milano-Sanremo. Boonen and Cav aren’t the only two top names that’ll be starting on Saturday in Sacramento. The next two riders are both Green Jersey winners at Le Tour: Oscar Freire and Thor Hushovd. 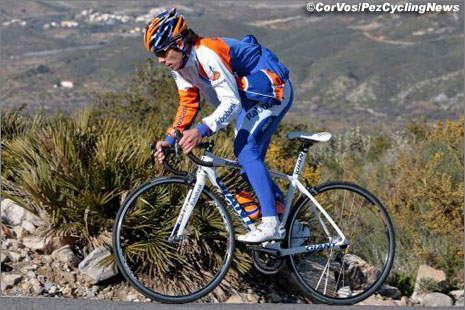 No word so far on Oscarito this year…we’ll get a first look over the weekend.

Freire raced last year in California, but came up emtpy handed. He hasn’t raced yet in 2009, so it’s fair to say that it’ll probably take a few days for him to get that racing feeling. He could be a good pick for a later stage, but right now, I don’t think he’s going to take one from Boonen or Cav…but I could be very wrong. Who argues with a three-time World Champion? Not this writer. Hushovd is also a question mark at the moment – he hasn’t raced yet, but he’s big and strong and his name is Thor, so he’ll be up there at some point. 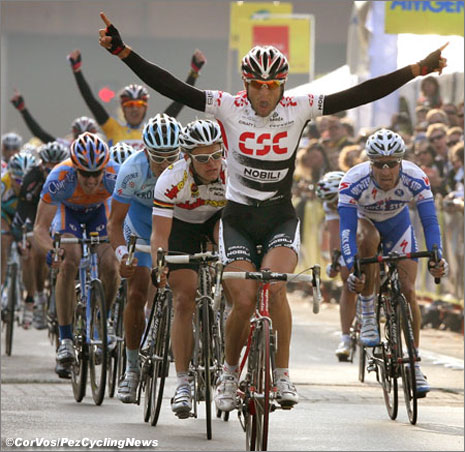 JJ Haedo has quite the California pedigree. He’ll be looking to add to it next week.

After sorting our way through four of the top sprinters on the planet, my gaze falls on multi-time stage winner at the Tour of California and probable winner of another in 2009 (hey, he’s won in each of the last two editions) – JJ Haedo. This will be JJ’s third full season in Europe, and this should well be the year when he really starts to find his way. I should probably have put him higher up on the stage hunters list, but he still doesn’t quite garner the attention of any of the above four names. That should change pretty soon. 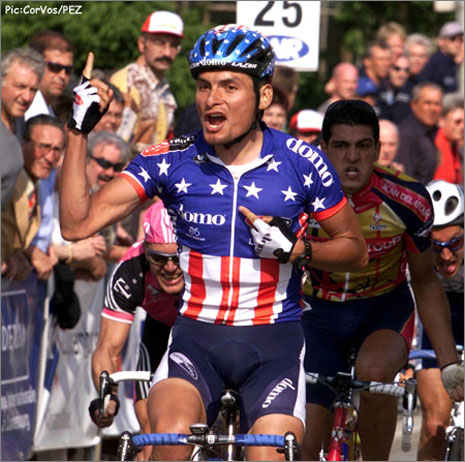 Is it possible we’ll be seeing a little of this from Freddie?

What happened to Freddie Rodriguez? The multi-time USPRO Champion and former top stage finisher at the Tour de France didn’t do jack last year in America. I know American racing is different, but this is Fast Freddie we’re talking about, and he couldn’t win one single crit last year? I think last year was a dud for Freddie, and I think this year (barring a full-on Rock Racing collapse) we’ll be seeing the Freddie of old. I want to see the old school Fast Freddie at least, I’m guessing you wouldn’t mind either. If we get some old school FF, I wouldn’t be surprised if he took a stage. If we get 2008 FF, I’d be surprised with a top 5. 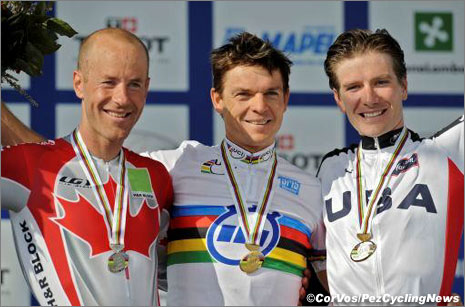 To change the tune just a wee bit, I think Slipstream will have a big shot at one stage in particular – the Solvang time trial. It’ll be hard to topple the likes of Armstrong, Leipheimer, and Cancellara, but if anyone will be doing it, it’ll be David Zabriskie, Svein Tuft, or Christian Van De Velde. 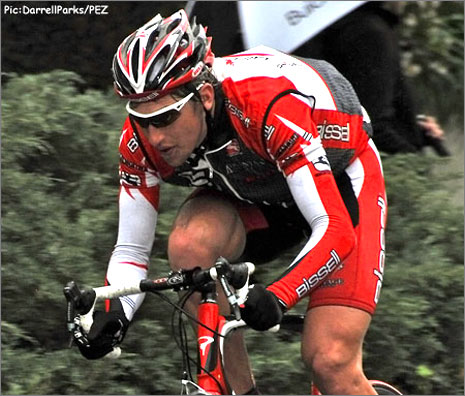 Count me in as a Zirbel fan.

Speaking of time trials, I would be a giant ass if I didn’t bring up one man’s name: Tom Zirbel. Zirbel has been steadily improving every year for almost half a decade, and methinks this will be Zirbel’s year. He missed out on the USPRO TT title in September, and after a great winter, he’s a big favorite come the drag race Prologue or Stage 6 in Solvang. Zirbel has already been down to Argentina and ridden a strong TT – besting Ivan Basso and coming just short of the stage. I’m guessing Zirbel was still on the upward swing at that point. If I was again guessing, I’d guess that FasCat Frank Overton has him coming to 100% heading into this week. This man was born to time trial. 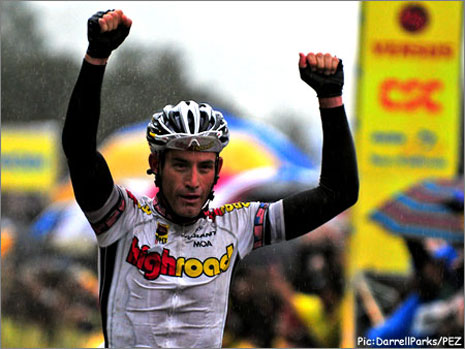 George Hincapie is a good pick for a stage win…does he have eyes on the overall as well?

Recall from the earlier preview that I mentioned Columbia is coming to California with a Tour team – that’s not only for a few GC hopes and Cavendish. They have an incredibly squad of stage hunters to go along with Cavendish: George Hincapie and Kim Kirchen come quickly to mind. Hincapie will be solid in California, as always. The only question is: what will his opporunities consist of? Will he have the chance to try his own hand like he did last year out of a long break, make the selection and win a small bunch kick, or be shackled by the hefty task of keeping an all-star field in check in hopes of defending an overall lead? The same goes for Kirchen, but I’m thinking he might be coming to California a bit underdone. I could be way off though: not too much to go off of when a guy hasn’t even raced yet. 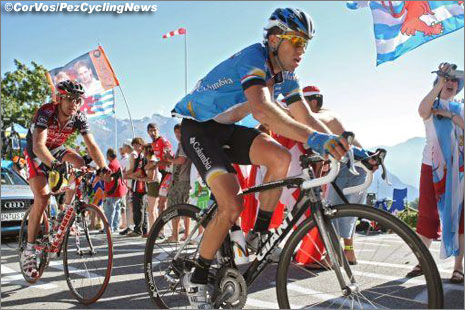 Don’t ask me for a guess on what kind of form Kirchen will be bringing to California.

Speaking of all-star squads – it would be an absolute eyebrow raiser if Saxo Bank fails to take a stage. They’re coming to California with a rider for every scenario – the overall with the Schlecks, anything with Cancellara and Voigt, small-ish sprints or breaks with the already flying O’Grady, and the big bunch kicks with Haedo. Oh, and I haven’t mentioned Larsson yet either. Bet on a stage from them.

I like stories of North American racers making the big jump to a European team. The Cervelo TestTeam picked up a couple last year: Dominique Rollin and Ted King. Rollin showed the world that he’s a bad, bad man when he took an epic (and this is one of those times when epic is a very appropriate word) stage win in the rain, solo, after something like four and a half days off the front. He was rewarded at the end of the year with a contract with Cervelo. The same goes for Ted King. King started the season as a solid rider, but finished it as one of America’s best. He took KOM jerseys all over the place, won big time races, and ended the season in the top 3 on the NRC standings (I think, don’t get mad if I messed that up a bit). He was also rightly rewarded with a trip overseas, or, er, back to California. Both Rollin and King will be looking for the break with the hopes of jersey or stage glory. 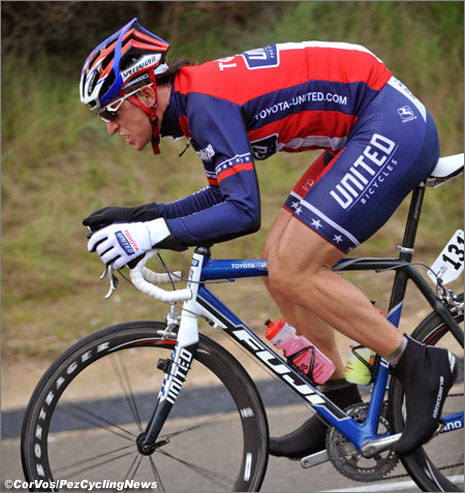 Dominique Rollin is apparently flying right now – watch for him!

Floyd Landis finished up my overall contenders preview, his team will finish up my stage hunters preview. I haven’t the faintest clue how good Landis will be in his return. Not a twinkle of an idea. My guess is that he’ll be good, but like everyone else that seems to come back from Dopingsuspensionville (guilty or not), they’re a bit slower (Basso might be the exception here). Whether it be from pure exhaustion from an awful time, less of a commitment to a sport that chewed em up and spit em out, or just plain clean when they were once dirty – I don’t care – the returners rarely seem to be the top flight superstars they once were (Sevilla, Mancebo, Hamilton, Botero, etc etc ad nauseam). Floyd will be an interesting rider to watch. He will have the added benefit of a giant bonfire lit under his ass, which could well make up for the perceived performance loss after a suspension.

His team will be interesting to watch as well. OUCH will for the first time be headed by a viable GC candidate, which should allow some of the other riders, who were once weighed down by this heavy burden, to break free – literally. First rider that comes to mind: Rory Sutherland. Sutherland should be a perfect candidate for a stage in California, and given the right circumstances, he can do it. On the younger side, 2009 could be John Murphy’s year. The 25-year-old Georgian showed that he is going to be around for a long while with a fantastic 2008 season. I think he could put on a show next week. Watch out for him. 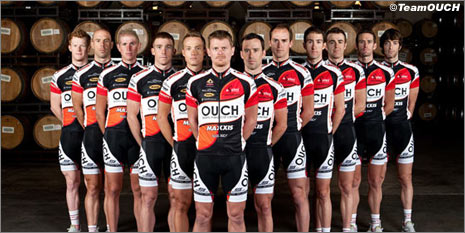 The new OUCH team has some heavy hitters.

And, as always, keep it tuned to PEZ for anything and everything Tour of California related. It’ll be a great week and we’re looking forward to bringing you the most entertaining coverage in the biz!