Awesome stuff from QuickStep’s Stijn Devolder as he rockets his way to back-to-back Ronde van Vlaanderen solo victories! He might have started the day in the service of Tom Boonen, but with Pozzato and Tommy B watching each other like slightly deranged super powers, Devolder took his chance and flew!

Last year, he got clear solo on the Eikenmolen; today he joined the breakaway there. And once he was on the front, he looked like an animal possessed! 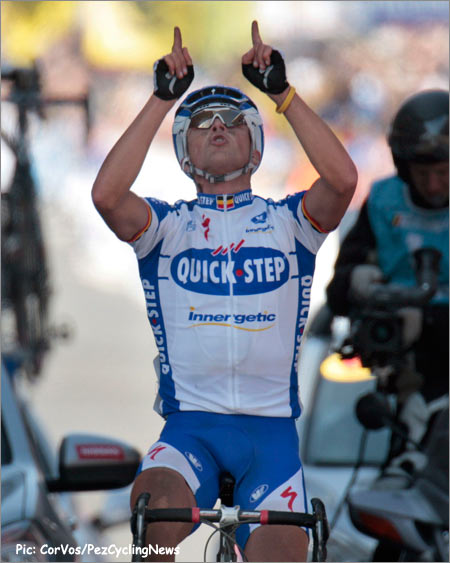 It was cycling’s equivalent of “nothing but net” as Devolder soloed in by more than a minute.

Once Devolder slammed the pedals down on the Kappel-Muur, the result was never in doubt. Even though his DS Wilfried Peeters was leaning out of the car, hammering the driver’s door in encouragement, his man (and team) had everything totally under control.

Devolder had a leisurely procession up the finishing straight to enjoy his win and was safely on his way to the podium as Heinrich Haussler slipped away for second and Phillipe Gilbert avoided the carnage of a major crash to grab third.

It was a pretty good day for a bike race – arm warmers and gloves at the start but no rain, so the cobbles weren’t too worrisome. Then the sun came out, warming the huge crowds beside the route, with what looked like a million Lion of Flanders flags gleaming bright yellow. 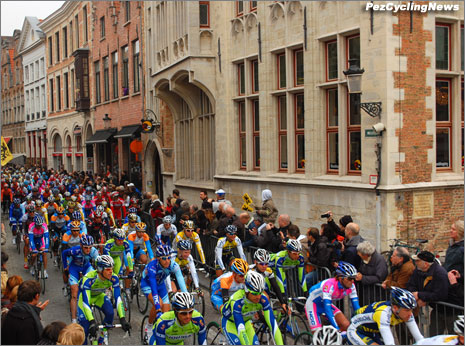 It was cool and foggy at the start in Brugge this morning, but the sun came out in a big way once the racing commenced in earnest.

Tom Boonen was out to make history by going better the King Edward of Merckx and winning De Ronde for a third time. Pippo Pzzato was out to follow Boonen everywhere and try to outsprint him.

It was bullet fast all day with the average speed at 43 kms/h, and at times it looked like the guys were lining up for a sprint and we were still at 100kms to go!

Things only got going when Vacansoleil’s Wim De Vocht and Liquigas’ serial attacker Aleksandr Kuschynski took off around half-distance. No doubt, Liquigas made sure to check the route profile to make sure Kuschynski wouldn’t run the risk of running any red lights or level crossings and getting booted off the race like he did at Het Nieuwsblad!

These two opened up a gap on the peloton with Filip Meirhaeghe (Landbouwkrediet) and BBox Bouyges Telecom’s Seb Turgot eventually giving up their pursuit.

Steven Cozza had a couple of attempts to get clear but the pace of the peloton was SOOOO high that no-one could get clear. 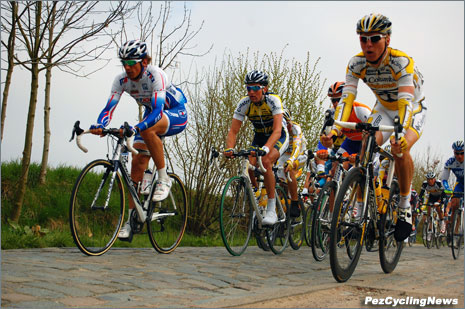 It’s not normally mentioned very much, but the cobbled sections that dot the course of De Ronde are no joke.

Vaarentstraat cobbles with 88kms to go and the field was absolutely screaming along – everyone desperate to get into position before the Oude-Kwaremont.

81kms to go en-route to the Paterberg, and Gabi Rasch was rolling things along for Cervelo. The field was already shredded, and a group of about 40 were off the front. QuickStep were pretty relaxed, cruising along a couple of ranks behind Cervelo.

Hushovd led the bunch onto the Paterberg, and over the top 16 guys had split off. Dan Lloyd went for it with Chavanel (QuickStep) and Quinziato (Liquigas) joining him. Hoste (Silence-Lotto), Bandiera (Lampre-NGC) and Guesdon of Francaise des Jeux made it the six.

So … Saxo-Bank, Columbia, Rabobank and Katusha weren’t represented as we hit the Koppenberg with 71kms to go. The six chasers soon picked up the struggling Kuschynski and De Vocht. 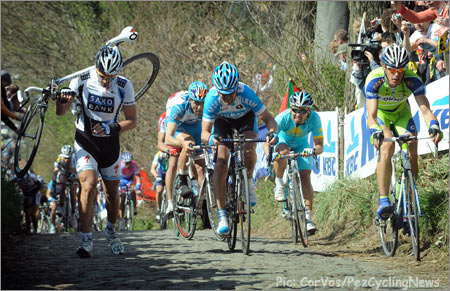 A broken chain put Cancellara’s legs to work in a more traditional fashion..

Boonen and Pozzato absolutely stamped up the Koppenberg while Cancellara carried his steed up looking in surprisingly good humor – he’d picked his broken chain off the road to make a rather fetching necklace.

Onto the Steenbeekdries at 65kms to go and the escapees had a minute and a half. Next up, the Taaienberg and Chavanel led the break; QuickStep were riding to keep the gap manageable for Boonen on the main field. Boonen rode like he was at war with the cobbles, with Pozzato calmly glued to his back wheel. 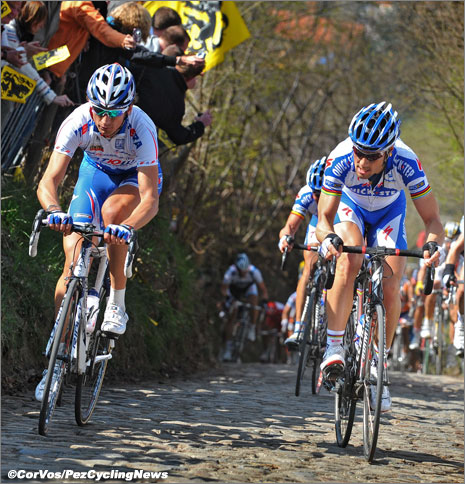 Pozzato and Boonen neutralized each other today. There’s no other way to put it – Boonen was willing to play, Pippo was ready to defend, so they went nowhere. But please, pretty please, Signor Pozzato, can you at least open your mouth to breathe up the Koppenberg? The last person I saw do that (on the Ventoux) was named Vino, and we all know how that went.

Mayhem behind as the remains of the field is mashed. Boonen’s flicking his elbow but Pozzato’s not coming through to help, and Boonen looks fearsomely strong.

The riders hit the Eikenberg at 58kms to go and Boonen’s group was now 44 seconds back, with Cervelo working hard.

The Varent is a short, sharp shocker just out of Oudenaarde and Kuschynski was going very deep to help Quinziato in the lead escape. They’re now heading for two minutes clear and QuickStep mass at the front of the peloton for a bit of a pow-wow.

By the time we hit the Leberg the gap is starting to fall again, and QuickStep were pulling things back together. 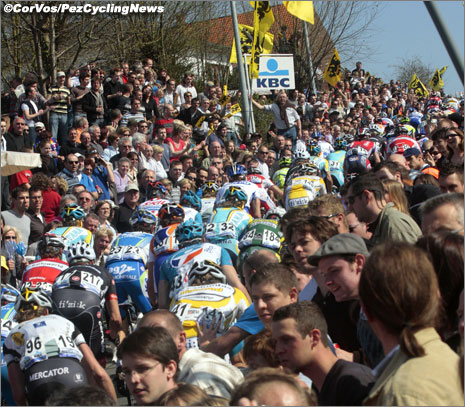 Words do not describe the scene on the Berendries…keep that in mind when I tell you that doesn’t even compare to the Muur.

Chavanel split the front group on the Berendries taking Hoste and Quinziato with him.

Pozzato jumps out of the peloton with Boonen and Devolder coming along behind.

37kms to go and all of a sudden we have a big front group as QuickStep get up to the breakaway – Boonen, Devolder and Chavanel all together. Pretty morale-sapping for 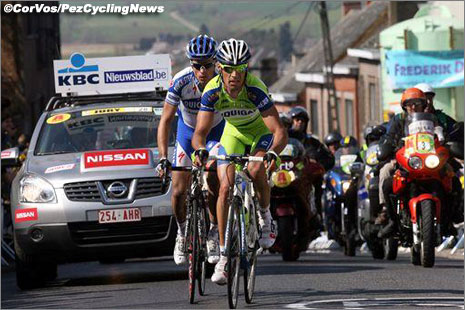 Sylvain Chavanel rode brilliantly all day. He seemed to be everywhere at the front of the race. Yet another good one for Quinziato as well – when will he move to a Northern team to really give himself the chance he deserves?

Next to attack, it’s Chavanel and Quinziato, but by 28kms to go the gap is tumbling as Topsport Vlaanderen’s Preben Van Hecke goes off the front of the peloton.

Chava’ and Quinziato are first onto the Eikenmolen – behind Devolder rockets clear, just like last year, and is on Van Hecke in a matter of moments! The peloton is a long agonised line …. Sergei Ivanov tries to reach Devolder.

20kms to go and it’s Quinziato and Van Hecke, with two QuickSteps – Devolder and Chavanel – for company, and they’ve half a minute and stretching on Simon Spilak (Lampre), Ivanov, Hoogerland (Vacansoleil) and yet another QuickStep in Tossato.

16kms to go and we’re heading for the Muur van Geraardsbergen and the crowd numbers … are … MASSIVE! 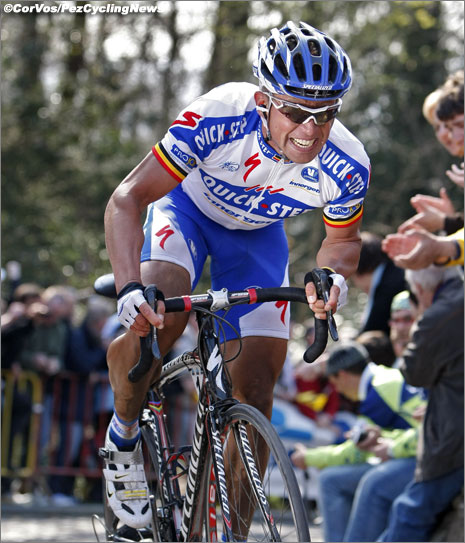 Devolder is making the Muur is own personal solo property. He has gone up it alone the past two years.

Silence-Lotto are desperately pulling on the front of the peloton as the gap to the leading quartet goes over a minute. Flecha charges away on the bottom of the Muur. Up front, Devolder thunders up the Kappel-Muur as Quinziato looks like he’s going to pieces! The crowd roar brings out goosebumps, as Devolder produces a dominating burst of power to rip clear. 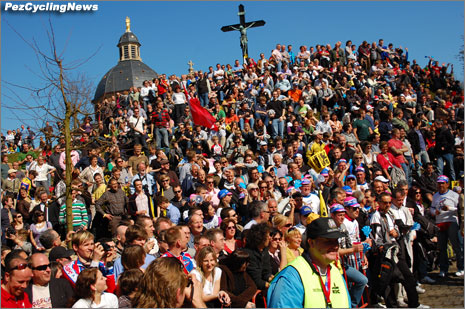 No really, the crowd was HUGE!

Boonen, Gilbert and Pozzato are battering up behind, but Devolder is … GONE!! He pelts off the Muur and screams under 15kms to go. He looks like he’s on a training day. Chavanel’s freewheeling behind Quinziato as the rejuvenated Van Hecke catches up again.

13kms to go and Devolder’s lead is now 28 seconds as he hurtles onto the Bosberg, the last climb of the day. Boonen’s peloton is now over a minute back. The defending champ makes mincemeat of the Bosberg. 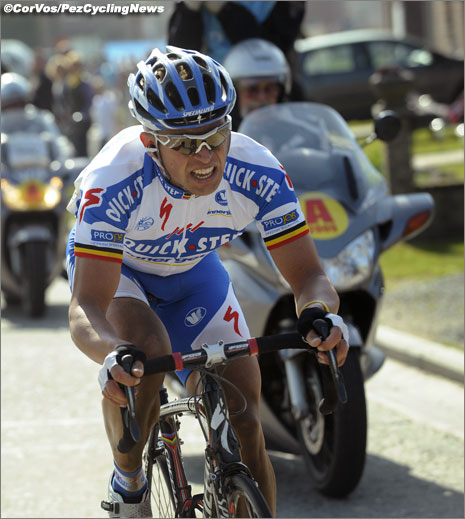 5 kms to go and Devolder is cruising a minute clear. By 2 kms left, Cervelo and Silence-Lotto have shut down the three chasers

Devolder screams under the red kite, surrounded by a flotilla of cars and motos, and sweeps round the final right-hander into the finishing straight. 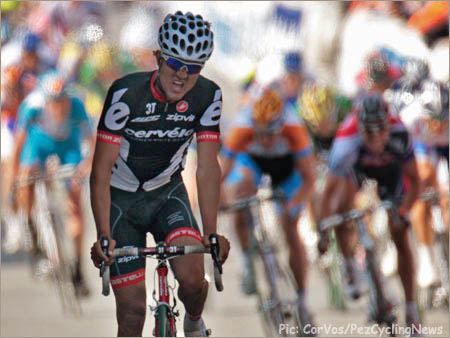 Haussler launches for the second step of the podium and gets it as Hushovd puts Rast into the barriers and then somersaults himself after finding there’s no way past Gilbert.

Phenomenal stuff from Devolder, and even although QuickStep did look vulnerable at mid-race, Rabobank and the other teams just couldn’t get it together enough to stick the knife in. 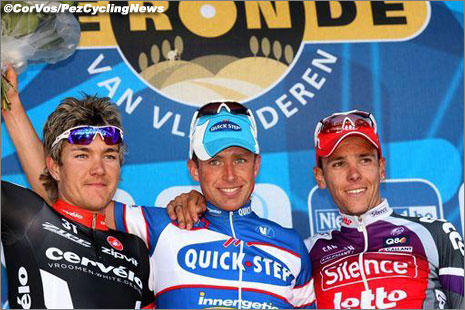 For once: three happy podium finishers: Devolder wins, Haussler scores a worthy 2nd that he can’t and shouldn’t cry about, and Gilbert gets a huge podium spot for himself and his Silence squad.

What are the odds on Devolder going for a three-peat next year?

Loads more good stuff to come from Pez at the Ronde van Vlaanderen, so don’t touch that dial! 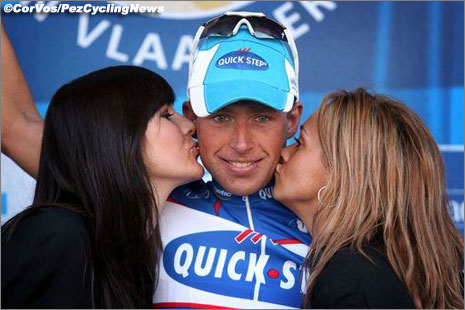