PEZ Roadside: Dried fish and beer; 203 kilometres, 11 savage, cobbled climbs; a beautiful February day in the ancient university city of Gent; throw in the world’s best cyclists and we’ve got a bike race! Het Nieuwsblad, formerly Het Volk, known locally as Gent-Gent, and this is where the season gets serious.

This weekend signals the start of the ‘real’ Euro-season, and judging by the looks on riders’ faces, there was no holding back.

With the “new country” pumping from the PA doing it’s best to awaken the thousands of hung-over students laying late on this fine Saturday morning, the first team rolls in to Sint Pietersplein. 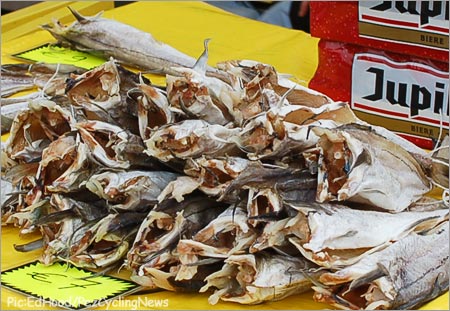 Appropriately it’s Topsport Vlaanderen and the bike hungry human tide flows towards the bus. White is the ‘in’ colour for team bikes this year and the Topsport aluminium Merckx machines follow that trend.

Whirlpool-Author arrive, all the way from the Czech Republic and the throng swirls towards them – really, everyone is waiting for QuickStep, but there’s time to kill.

New Dutch team, Vacansoleil rolls in; a lot of money has been spent – new cars, new bus and shiny new Batavus bikes – in white, of course.

The fluo green of the Liquigas vehicles is bright in the weak early spring sunshine. The tanned Italians are happy to chill in the sun – usually at this race they have to be cajoled out into the cold and rain.

There’s QuickStep – all other teams are forgotten as Boonen-mania kicks in and the crowd charges towards the big blue bus.

There’s plenty of room to look at bikes at the Agritubel bus; their white (what else) Kuotas have massively gusseted bottom brackets.

On the subject of big bottom brackets, the Liquigas Cannondales will take a bit of deflecting.

Over at low budget Palmans-Cras, there’s a familiar face; former Belgian elite champion, Gert Omloop, in the autumn of his career but still looking ice cool.

The square is a mass of fans, riders team cars and it’s time to get some sound bites.

Martijn Maaskant (Garmin & Netherlands) tries to sneak in to the bus, but we Pez him; “I had a crash down in the Algarve, the skin is not healing too well, but it doesn’t hurt when I’m on the bike. We don’t really have a designated leader for today, we’ll see out on the road who’s feeling good.”

Stuey O’Grady (Saxo Bank & Australia) multi tasks, signing autographs as he chats; “The pressure isn’t on us, it’s all on Lotto and QuickStep – it’s always that way here, the Belgian media expects so much. For our part, we’ll spend the first kilometres of the race just getting used to the hills and cobbles again. There are a few of us who hope to be there in the finalй; not Fabian (Cancellara) though, he’s still feeling crook.”

Ian Stannard (ISD & GB) is almost a local, the last two years he was with Belgian team Landbouwkrediet and there’s a steady stream of well wishers, shaking his hand and patting his back; “Team plan for today? half the guys don’t want to be here, they’d rather be back in Italy!
I’ve not done an awful lot of racing this year and it’s not certain I’ll get round, but I’m looking forward to it – I just wish it was raining though; I prefer wet cobbles!”

I ask Roger Hammond (Cervelo & GB) who is designated team leader, him or Thor Hushovd, the answer is terse; “we’ll race and sort it out on the road!” 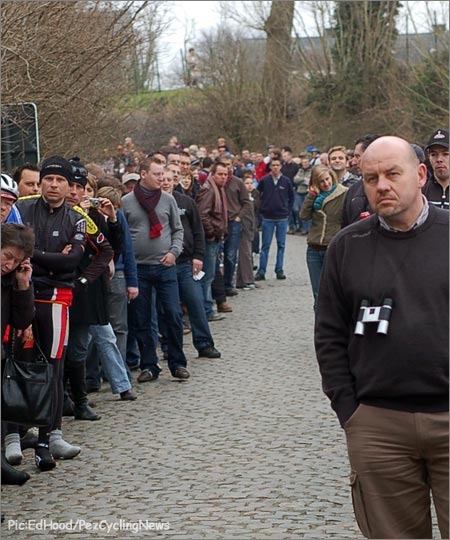 Our first glimpse of the race comes at around 50 K, on a flat fast stretch of dual carriageway with Herve Duclos-Lasalle (Cofidis & France) launching an attack.

The peloton is gutter to gutter, and for a moment there’s just the sound of swishing tyres and the whirl of transmissions, before the roar of the huge following convoy shatters the idyll.

The green flag car signifies the rear end of the race – the Marcus Burghardt fan club roll up their banner and head for their next spot. 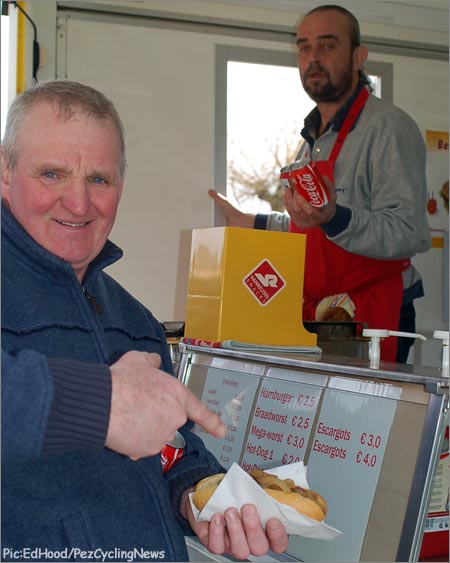 The Berendries climb, 80 K into the race and the burger van owner isn’t giving much away as he serves Dave’s hot dog; “I am not sure if today will be a good day for business, or not,” he scowls at me – maybe he thinks I work for the Tax man?

Duclos-Lasalle’s attack has ‘stuck’ and he’s clear by 2-48 with team mate Guillaume Blot, a Vacansoleil, a Landbou and a Palmans; Jean Zen from northern France – a big winner in the amateur stakes.

The gap to the bunch is three minutes and the sun is warm on our skin – it’s not so long since snow caused the race to be cancelled.

There’s no urgency in the huge bunch, a river of colour, flowing up hill.
The pace is so easy that traffic jams develop and the guys at the rear of the field stall. Callum springs to the aid of number 198 Oleks Kvachuk (ISD & Ukraine).

The convoy behind the race is huge, and takes an age to pass, but by the time we walk to the car and head down the hill, the crowd has gone and there’s no chaos, just tranquillity – until de Panne, that is.

The Eikenberg, 50 K to go and the scene of Gilbert’s 2008 race winning move; he attacked here, bridged to the break then went on to win alone.

And there they are – five still away, Zen looks good, the rest don’t.

With the noise, the crowd, taking pictures and the constant fear of getting run over by a motorbike it’s hard to identify every rider – but Flecha (Spain) Langeveld (Netherlands) and Nuyens (Belgium) are three of the Rabos. 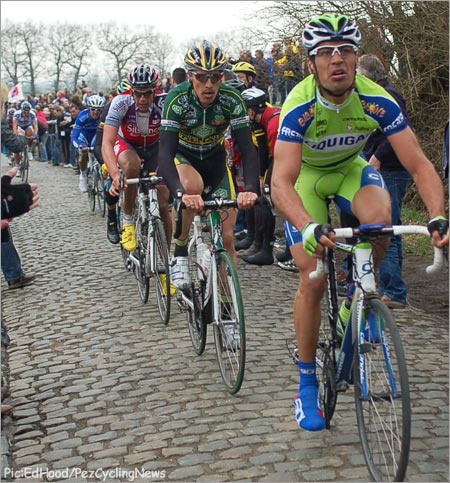 Behind – as Dave describes it – ‘it’s a plane crash,’ and there’s no bunch, just a long string of desperate men, with the stragglers mixed in with the team cars and race vehicles. 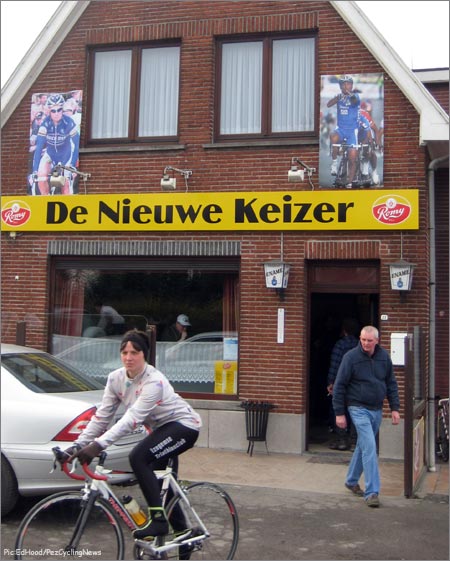 De Nieuwe Keizer ‘weiler cafe’ and through the fug of smoke we can just about see the TV – they don’t have much time for those EU non-smoking regulations in Flanders. 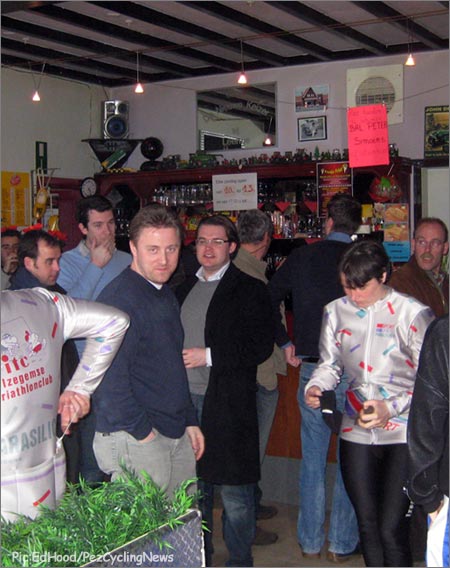 The mood in the bar isn’t good. Two are clear, Heinrich Haussler (Cervelo & Germany) and Sebastian Langeveld (Rabobank & Netherlands) – it’s not a good choice for our drinking buddies; a Dutch or a German winner!

Gilbert launches a counter move, but doesn’t get an awful lot of help from fellow escapee and Belgian Frederic Amorison (Landbouwkrediet); he gets none from his other compatriot who has made the escape – Nick Nuyens.

The mood in the bar lifts as Gilbert hacks away at the two leaders margin – until he cracks.

The bar is quiet but expectant as Belgians Leif Hoste’s (Lotto) and Wouter Weylandt (Quickstep) try to haul the fugitives back. The gap comes down, but not quickly enough, Hoste cracks, Weylandt is spent.

Ironically it’s Rabobank’s counter ‘digs’ which spell the end for Langeveld and Haussler. If Flecha had sat still, then Langeveld was guaranteed second, if it came together, with Hushovd and Boonen lurking, a Rabobank podium was by no means certain. 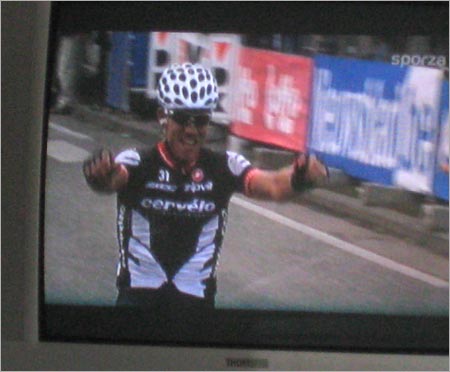 Come together it did, Hushovd won for Cervelo and Norway; Belgian Kevin Ista, gave Agritubel a welcome and unexpected podium and Flecha took third.

It was all academic to our Belgian pals; a Norwegian win in Het Volk, heads shake – still, better than a Dutchman!

Can QuickStep pull another donkey out of the hat at Kuurne, and make partial amends for today’s disaster?