And here we are – the final night of racing in one of the finest racing venues on the planet. It might not be the prettiest, the cleanest, or possess even a comfortable temperature – when it comes to atmosphere and spectacular bike racing though, you just can’t do better than the racing on Gent’s track. It’s the Alpe d’Huez of Six Days. Come join us one more time in Gent as Ed takes us trackside for the finale.

Iljo has been quick all week, ‘super motivated.’ It’s the last lap and he’s clear at the front, back flat, face a mask of pain; the crowd is going crazy – cow bells, air horns, whistles. He’s going to take his fourth Gent six, in great style. 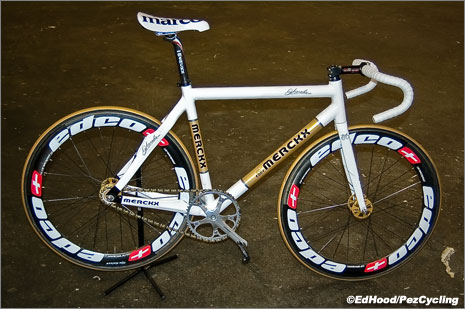 But wait, Alex is coming late, over the top, he’s been wasted, these last ten minutes; but he swerves, rocks, rolls, digs deep, deep – arches his back, kicks. Michael throws his arms high; so do I – Alex Rasmussen and Michael Morkov have won the 2009 Gent six day ! Kris wells up: the boys come in, we hug them, so does Franco – it doesn’t get any better !

It was a short sleep on Saturday night; that’s why I put those two ‘Burn, intense energy shots’ in the fridge. 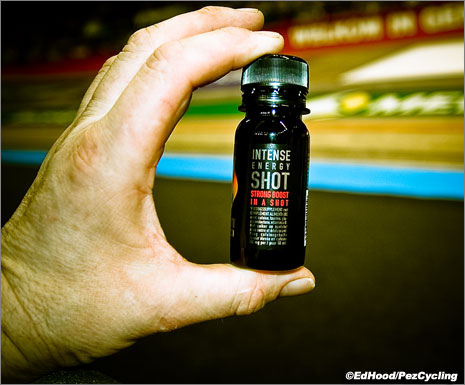 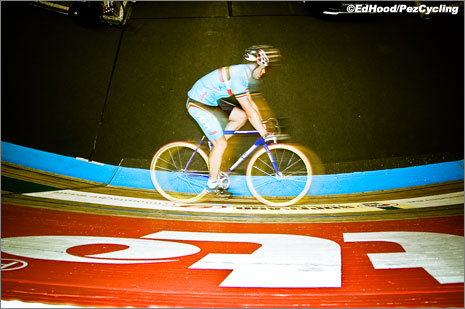 To say the banking is steep is putting it mildly.

Day six; the big one, and the air is charged, will it be the Swiss? Franco is flying, fastest lap again tonight, and Bruno? – he’s still the Capo. 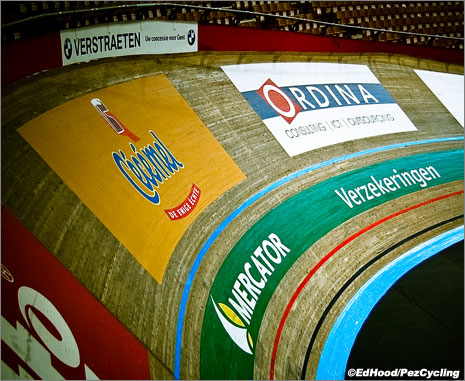 Keisse and Kluge are flying too – the place is long sold out to see the return of the prodigal son. 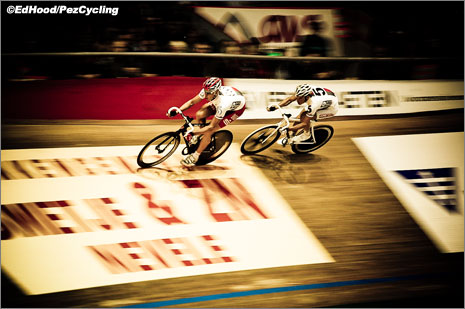 Or will it be our Danes ? Alex with his raw power and Michael the super stylist, deceptively quick and a flashing sprinter in his own right.

Before I’ve even showered, we get some Team Sky gossip; they’re getting 400 frames, free, from Pinarello. They’ll be equipped with Shimano electronic – again, all free. That’s unusual, pro teams normally have to pay ‘cost’ price for their equipment – even the big teams.

There’s a tension in the air – and the smell of frying burgers, at 11:00 am on a Sunday morning. 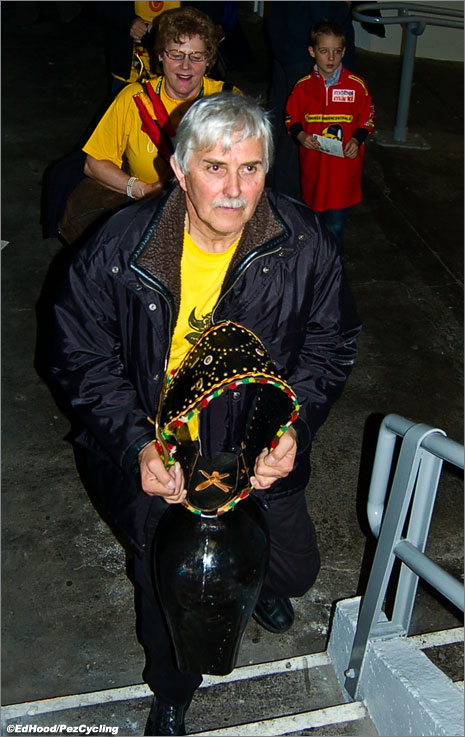 Alex and Michael are duelling for points with Keisse and Kluge – our boys are second in the points race, win the devil and are third in the flying lap. Franco pulls 08.71 to win – outstanding !

The Derny, and Sash belt out; ‘Encore un Fois’ a great tune for bike racing. 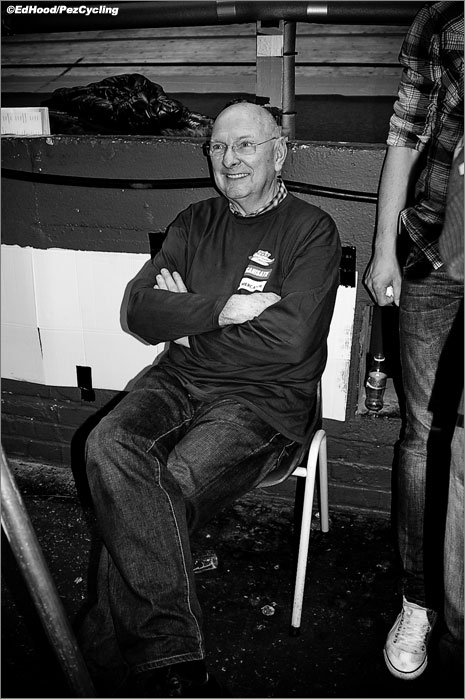 We’re live on TV now, must remember to watch my scratching habits.

De Ketele wins the Derny, from Iljo, the drivers of the little motor bikes should all be on the stage, with their theatrical gesticulations and facial expressions. 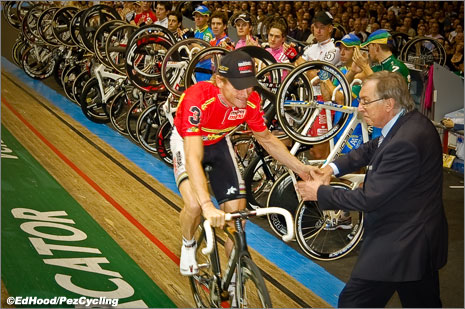 There’s no ‘entertainment’ tonight – but there is Bruno’s farewell. An all time great, the best six day rider of his generation, he’s still at the very top; there won’t be that shaky, ‘one season too many.’ 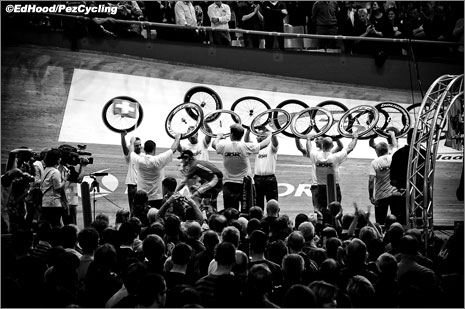 The mechanics pay homage to the capo. 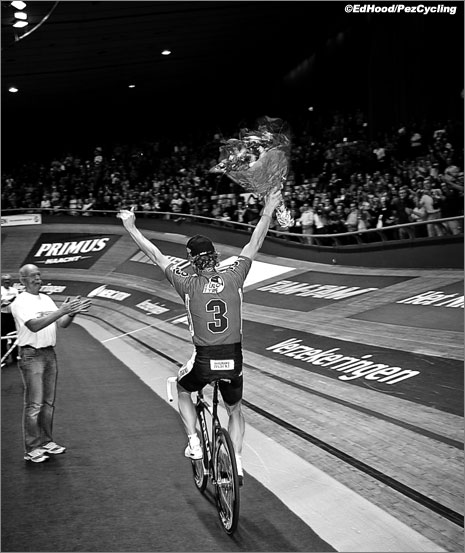 The scratch race, YMCA is the tune, and it’s worrying that Pete Jacques knows all the moves.

I have to go to the cabin, there’s Robert Slippens with Cokes for the kids – still slim, but grey haired. With Danny Stam, he made a great six day team – Danny must miss him. 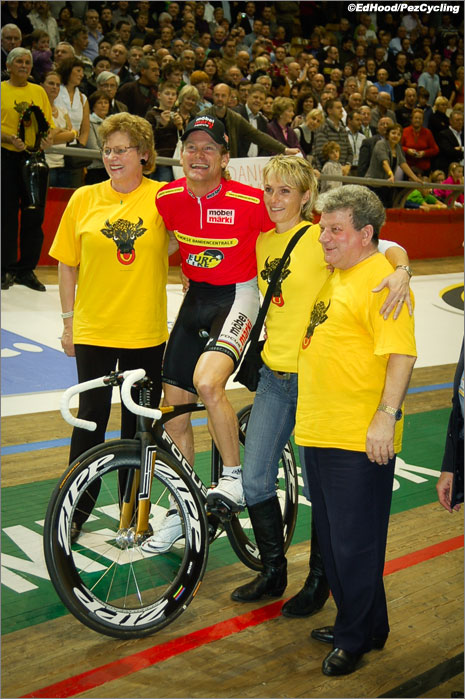 I miss the start of the chase because I have to start breaking camp.

When I do take up my, ‘bottle station’ beside the track, the noise is deafening. It’s ‘oom-pah’ music coming over the PA, there are whistles, cow bells, air horns, people screaming themselves hoarse; you can barely hear the thunder of the Continentals and Schwalbes on the boards, but strangely, you can hear the chains rattle – and feel the air move as the string flashes past.

It’s a good race, few lulls and constant attacks, Patrick Sercu will enjoy his cognac, tonight – a strong field, a full house and great racing. All the top teams are on the zero lap – it’s down to sprints. 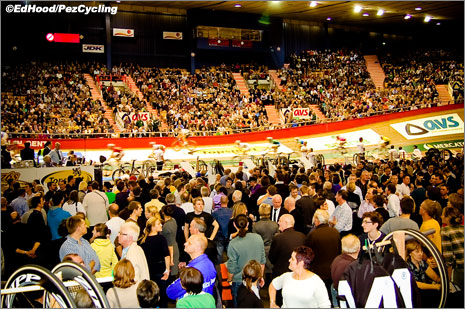 Of course it was a sellout crowd on the final night. 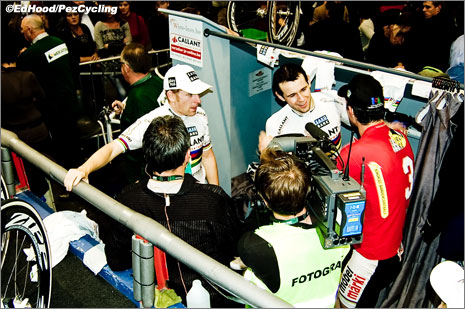 The media…and Franco…descend upon Michael and Alex for the story from the winners’ mouths.

If you’re a runner or soigneur, you’re meant to stay cool, detached, displays of emotion are frowned upon – but I couldn’t help but throw my arms to the skies, when Alex found that sprint. 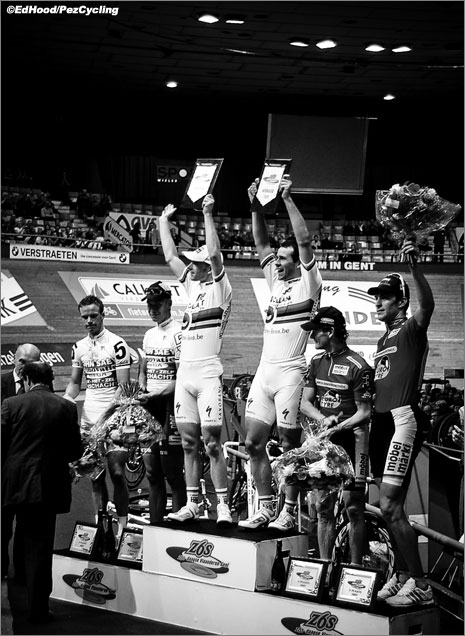 Alex, Michael, Franco, Kris – it was a pleasure and an honour.