Michael throws Alex in, the change is good, he’s flying – it’s the 500 metre time trial; Iljo and Roger Kluge have posted 27.83, fastest of the night, will it stand ? Alex breaks the beam 27.3 – wow! Kris hands me Michael’s Saxo Bank hat for the presentation; I trot round, as I pass the big score board, I glance up; “BEST TIME: Keisse and Kluge 27.83” it flashes – huh?

Later, we discover it was a ‘timing error’ – ‘a rider winding down broke the timing beam’ and Alex and Michael actually did a 28 ! Well, it is Gent, there’s a full house and why should Iljo’s fans be disappointed ? – if the timing won’t play ball; see to it ! 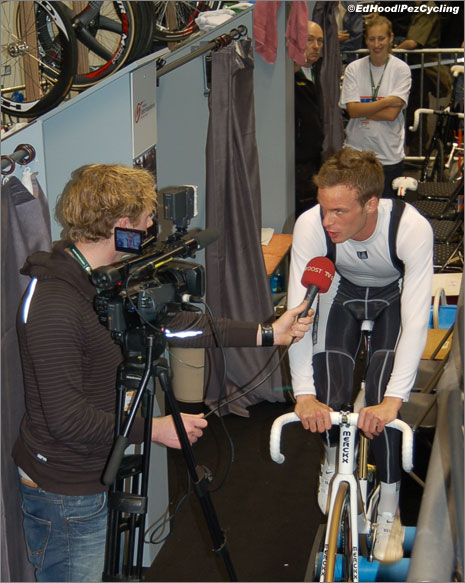 It’s nice to be the fan favorite, but with the popularity come a few obligations…

Night two; the first chase wasn’t as frantic as last night, but the racing was good; De Ketele and Bartko took it. The organisation are ‘bigging up’ De Ketele; his image – along with Danny Stam and Bruno – graces the cover of the programme and the race posters. However, none of the fans are buying this and Iljo is still the Golden Boy. We walked into the butchers today and the first question was; “how is Keisse going ?” 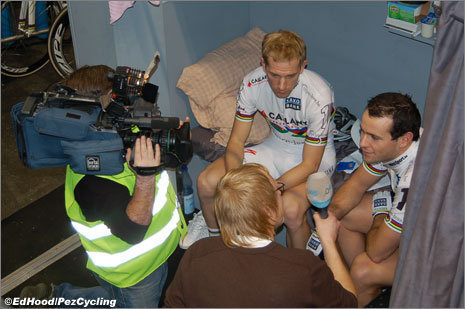 Alex and Michael aren’t the hometown favorites here, but they’re still not immune from the constant attention.

First race of the night was a points, then a devil – won by Michael; Alex might be the sprinter, but Michael is pretty damn quick too.

The flying lap was next; most of the teams did their ride in silence or with none too great euro pop playing, but Iljo and Kluge had “We Will Rock You!” thundering over the PA, pumping the crowd up and vibrating my internal organs – 8.9. Rapid, but Alex and Michael just shaded that. However, technically, it wasn’t their best; the sling into the home straight didn’t utilise the full height of the banking and Alex wavered off line in the back straight. 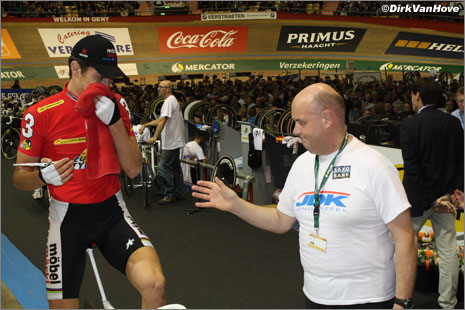 Ed tends to Marvelous before he gets back to racing.

Bruno and Franco were last off as last night’s fastest – it was a master class. Bruno skiffing the barrier, Franco crouching low in the jet wash; the sling would have launched an F 16 off an aircraft carrier deck, never mind a cyclist into a flying lap. Franco told us later that he was so fast into turn one that he couldn’t really drive until he was in the back straight. You didn’t really need to look at the timing – you just knew they were quickest. 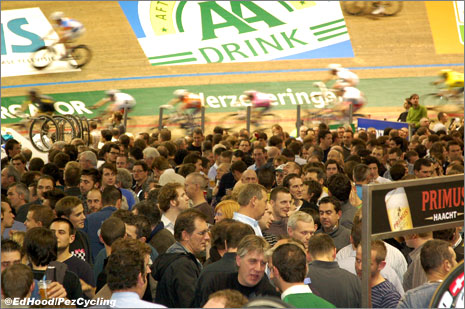 A few people have been showing up at Gent every night. It’s a sold out affair.

The crowds were huge, all the seats filled and the track centre heaving – no one has told the Flemish fans that six day racing is in decline. Some one, somewhere, must be making a fortune on the beer and burger concessions – they can’t get them across the counters fast enough. 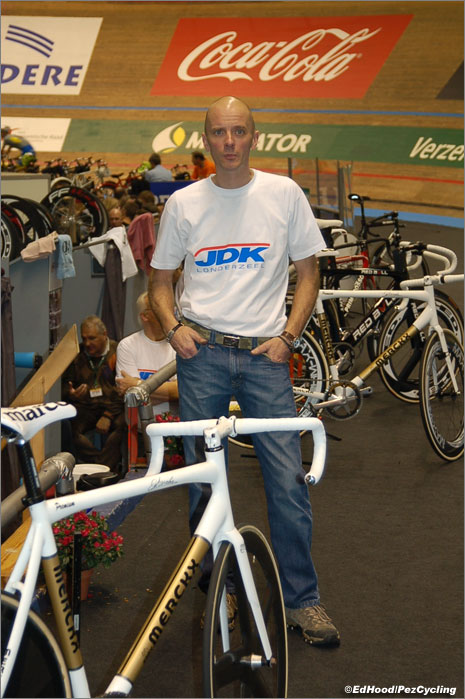 Note to self: do not mess with Dirk. See below.

But it’s not all good natured, some of Leon Van Bon’s Dutch fans were giving Dirk, our mechanic a hard time, he thought he had sorted it out, turned his back on them and next thing they were raising a chair to him – let’s just say that two Van Bon fans will have sore faces, this morning.

Even although it’s only the second night, a few teams are showing the strain; O’Shea and Howard haven’t lost a lot of laps, but boy – those guys are having to hurt themselves to stay in this race. 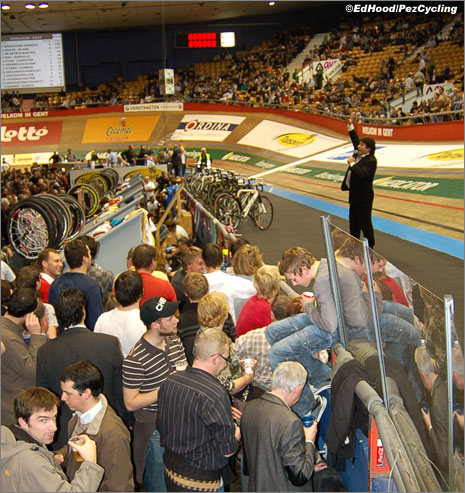 Day 2’s singer, Garry Hagger, isn’t nearly as easy on the eyes as you’ll come to see for Day 3. See below.

We had cabaret tonight, Garry Hagger – he walks round the track belting out the Vlaamse Pop but ending with; ‘Hey Las Vegas !’ There was a lump in my throat as I remembered Vik and I hanging over the barriers clutching our pils singing along to Garry’s rendition of this very song, a few years ago – happy days !

The speaker is really loud this year and when he’s doing his thing during the derny races, it’s crazy loud – Franco has ear plugs in, most of the time. 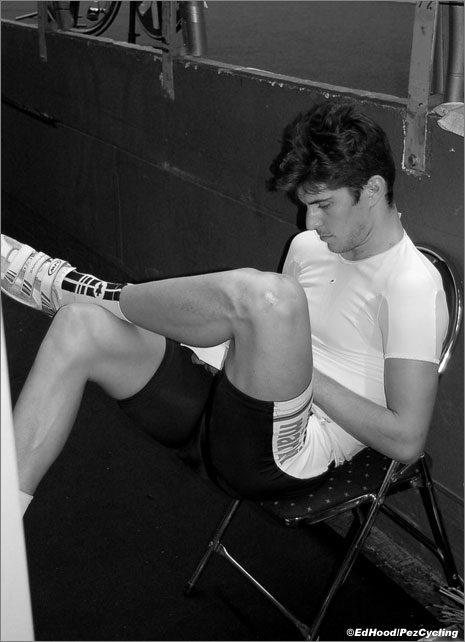 Franco catches up on a little reading, accompanied by his ear plugs.

The final madison wasn’t full gas but Steven Schets and Steven De Neef were pulled out, early – they were just losing too many laps. 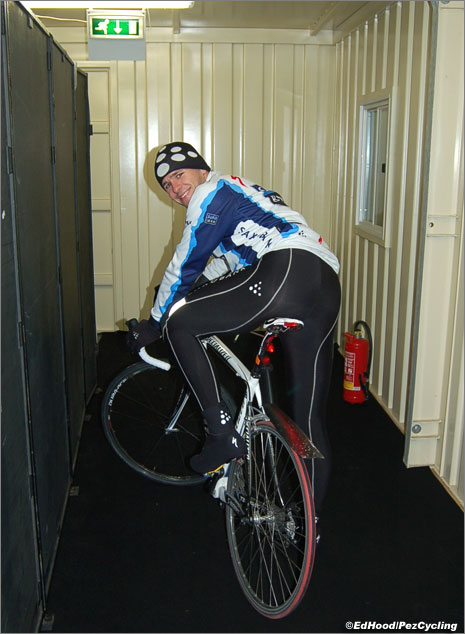 Alex hops on his bike for the short ride back to the hotel to finish off his evening.

Not long until day three, but the clothes are all sorted, the track side cabins tidied, the shopping’s done and the pics are sent to Pez; best relax while I can, 02:00 am finish tonight ! 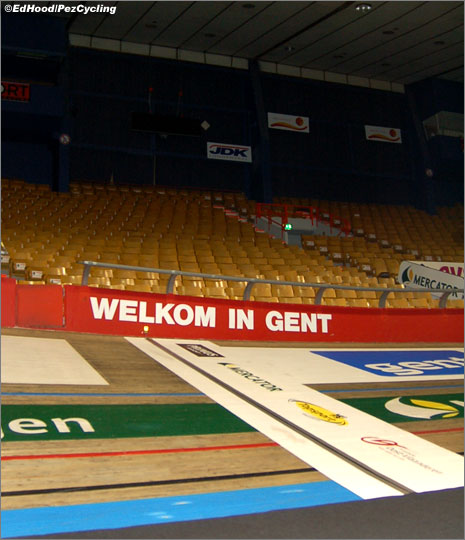 Day 3
When the young lad at the VIP bar slid the two pils across the bar to me, it was pushing 03:00 am. We got to bed around 03:30 am and the alarm blasted at 10:00 am, this morning. But I’m finding the rhythm of the crazy hours, and the aches and pains from the constant standing on concrete have begun to ease away. 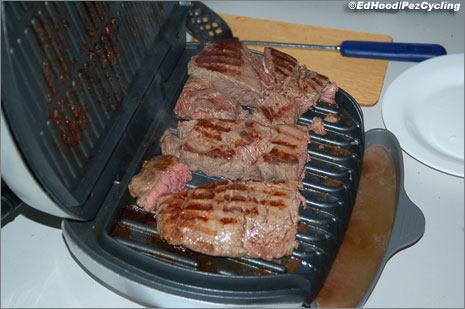 That looks quite tasty.

It was steak for tea, tonite; lovely chunks of Belgian beef – ‘paves’ as they call them because they resemble cobble stones. 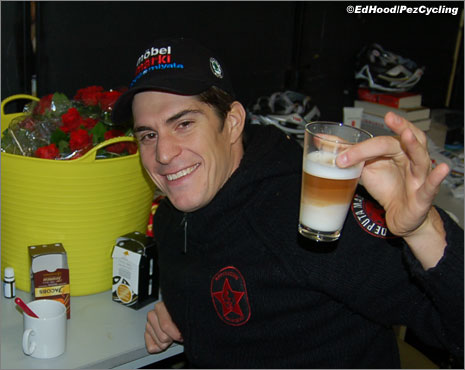 Franco’s latest pride and joy is a Bosch coffee machine, he loves to use it; so the runner gets his coffee made by the star rider – cool!

Iljo is chasing points; every time a team adds 100 to their points score, they get a ‘bonus lap’ – in other words, they gain a lap. Chasing the points in the smaller races is a risky strategy, though – it burns up a lot of gas; and you need high octane fuel for those chases. But the crowd loves it when he wins – he rides round one handed, pulling at one ear to indicate he needs more applause and cheers. 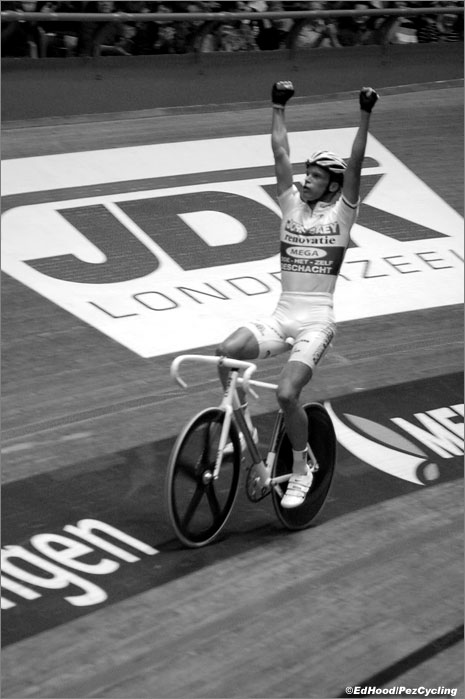 Iljo soaks up his crowd’s applause.

None of our guys were on the boards, today. The rolling presentation is as good a warm up as they need. The hall filled a little later, tonight but it was jumping by 22:00 as the tyres rumbled and Sylvester’s ‘Mighty Real’ throbbed in time to the chase.

Alex and Michael are finding their lines on the track – 8.76 for Alex to win the flying lap, beating Franco by 1/100th. The track record stands to Jean Pierre Van Zyl of South Africa at 8.67, ridden on 52 x 15; Alex could get that. The thing about six day riders is that they produce these world class times in the middle of what is a tough stage race – but with no free wheeling or descents ! 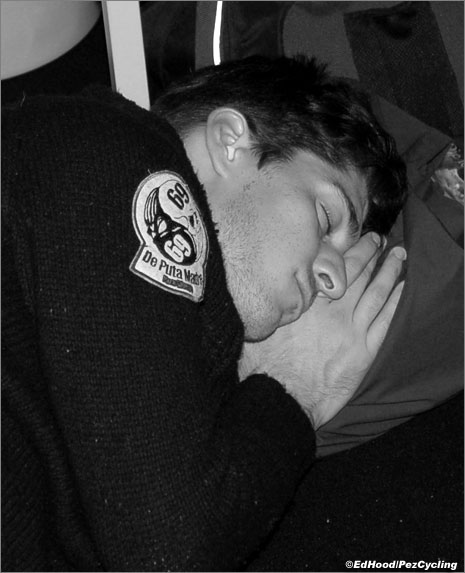 Franco was obviously not sleeping during the racing, but he did manage to squeeze in a little nap at some point.

Bruno looked great in the first madison, his timing is perfect; half a lap up before anyone can blink. When he’s away on a solo lap gain, his line is inch perfect and identical each lap; he rides low on the track, running off the black datum line down onto the ‘cote d’azur’ on the back straight before easing up to pick up the black line again into the banking – a joy to behold. 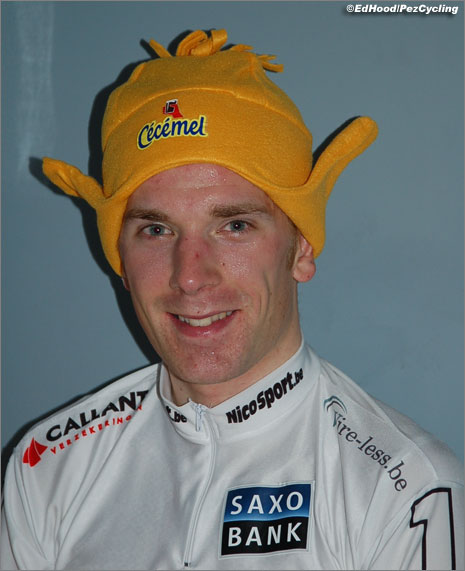 They were dishing out free hats, tonight – Michael got one, but I’m not sure it’s his colour.

Alana Dante was the cabaret, tonight; with a spiderweb cat suit, big heels – and voice to match. She did three laps with the radio mic, much to the delight of the gentlemen in the hall – me included. One thing about Flemish folk is that when it’s ‘fun time’ they don’t hold back. 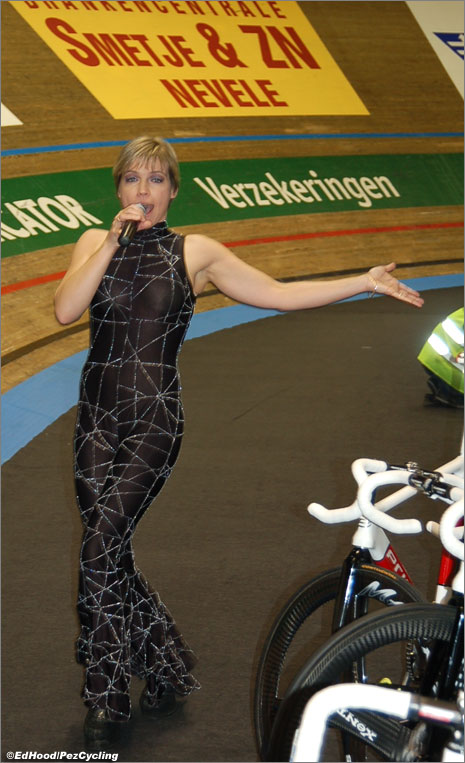 Michael’s little brother, Jesper is riding the U23 six; he popped in for a chat with us, tonight. His partner is world points silver medallist and Grenoble six rider, Daniel Kreutzfeldt’s brother; they’re inching up the classement, but it’s hard to see anyone beating the two young Aussies. 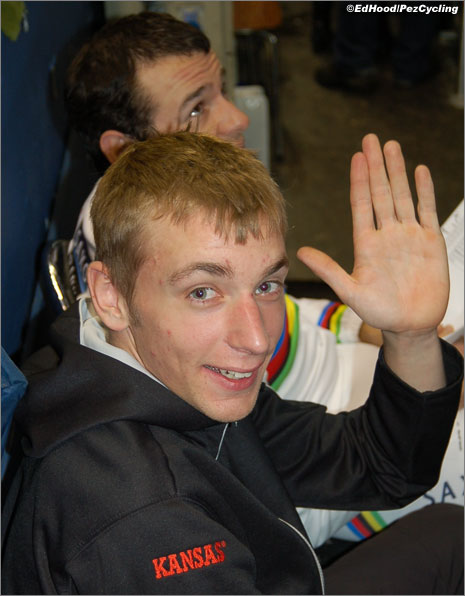 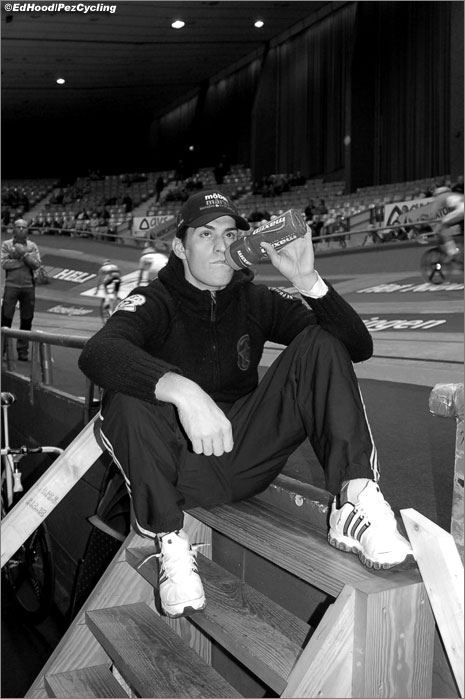 Franco watches the U23s do battle.

Franco got bored and borrowed my camera to photograph the crowd – they loved it. 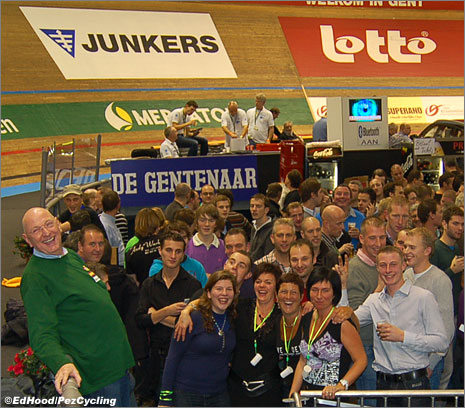 The result from Franco’s borrowing of Ed’s camera.

The crowd thrive on the dernys and most of all, they love a home boy win behind them – De Ketele’s derny crossed the line first after a big battle with Iljo – but unfortunately it had dropped Kenny and Iljo took it. 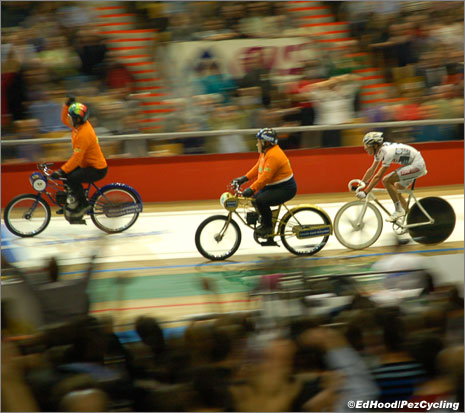 De Ketele’s driver thought he had the win, except he dropped De Ketele. Oops.

A legend came by tonight and I grabbed him for a photo – Patrick Cocquyt, 49 years-old: he won 17 kermesses against men half his age, this year. 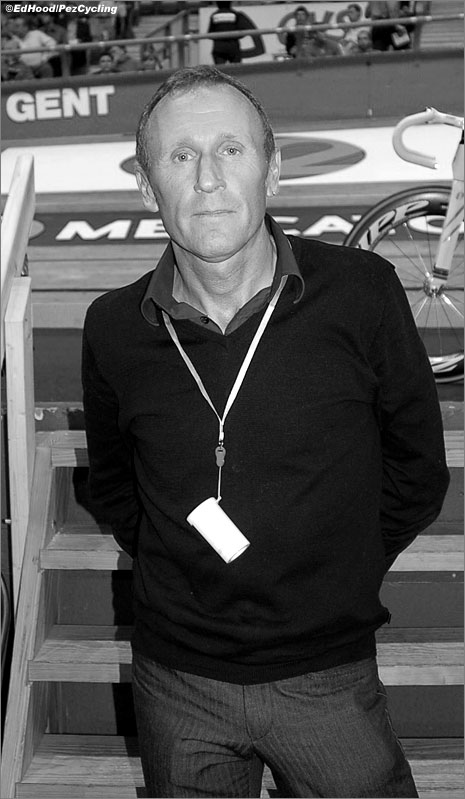 The second madison and Franco is drinking a lot – usually a bad sign and a pain for me as I have to keep trotting round to retrieve the bottles. 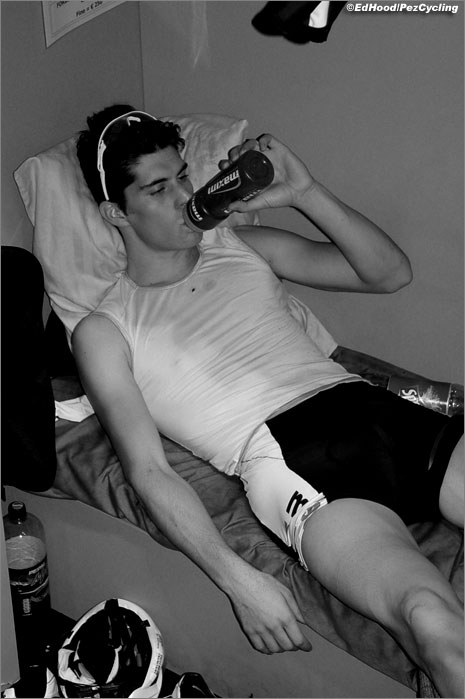 Franco suffered late in the day, but rode through it well.

Alex punctures, we haul him down as he swerves around on the rear rim – Dirk is cool, no drama, he changes the wheel as Alex stands patiently and glugs from his feeding bottle.

Franco mouths to us a word which means; ‘I am very tired!’ The last ten minutes are brutal, the little teams are floundering. But who’s this weaving through the traffic with a half lap to go, leading it out to find the best line and holding them all off to win – yeah, it’s our boss, Mr. Marvulli ! 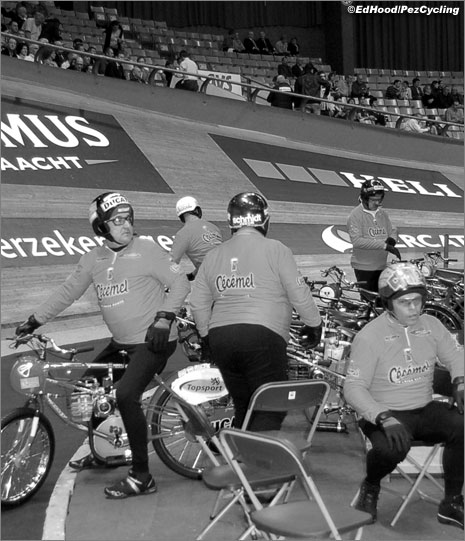 The odd world of the derny: the drivers ain’t lean.

The chasing over, it’s back to the dernys – but there’s a crisis down in the middenplein, two men fight their way through the sea of humanity with a precious cargo – if they don’t make it, there could be a riot ! But it’s OK, they prevail and man handle the barrels of pils across the bar – it was a near thing ! 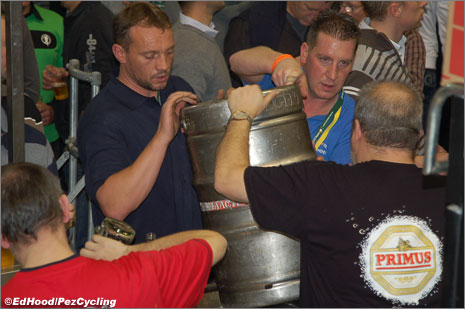 Kiss thump out, the dernys drone, the crowd thins but the hard core guys still queue at the bar; Kris goes down to cook the guy’s meal and start the washing. 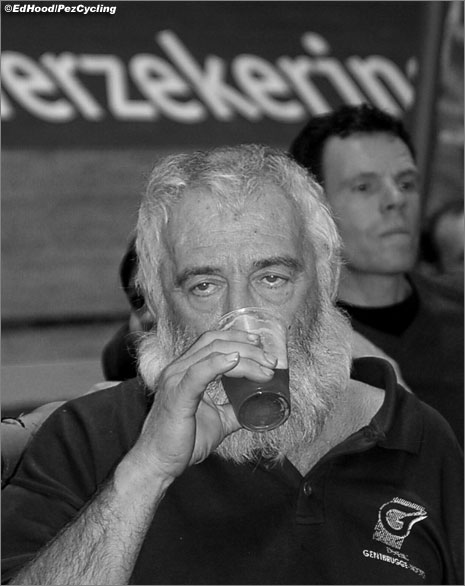 Lucky for this flahute, he has three more nights to imbibe.

It’s down to me to haul the boys in, wipe them down, tidy up the bomb site, empty the pee pails and start to think about that beer from the VIP bar.

Three down, three to go !