It’s 23:10 and most sensible folks are in bed, or at least thinking about it. But not here; the dernys drone, the PA is way into ‘harmful’ territory, the flow of pils shows no signs of easing off, the disco music pumps – Kim Wilde’s ‘Kids in America’ as the tumble drier works over time to dry jerseys soaked with sweat in the humid air of the Kuipke velodrome – welcome to the 69th Gent Six Day.

But the adventure started yesterday; and it’s not really a proper journey to a six if the plane lands in the same country as where the race is. Gent was no exception – Weeze (near Dusseldorf, according to Ryanair) was where I became re acquainted with the camper van. The rain was apocalyptic as we exited Germany, traversed Holland, and crossed into Belgium, near Antwerp.

Gent may be one of the classic sixes and the track might look great, nestled in among all those seats, with advertising everywhere – but behind the scenes, there’s little glamour. At Gent, unlike any of the other big sixes, there are no changing rooms. There’s a big old garage space built beside the stadium, installed within it is a row of sectional steel cabins, bolted together. 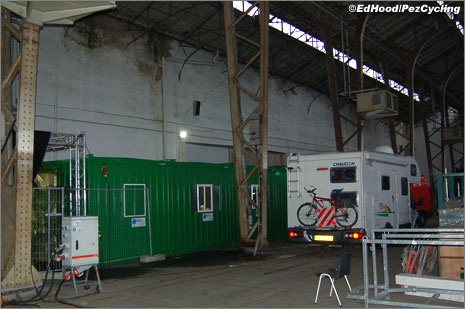 The lovely accommodations for the week: cabin and camper.

It’s just a big steel box – it reminds me of those movies about Russian ‘coffin ship’ nuclear submarines – subdivided into ‘cabins’ by plywood screens, there are no doors, just black muslin sheets which have to be pulled to one side – Latin American brothel style. 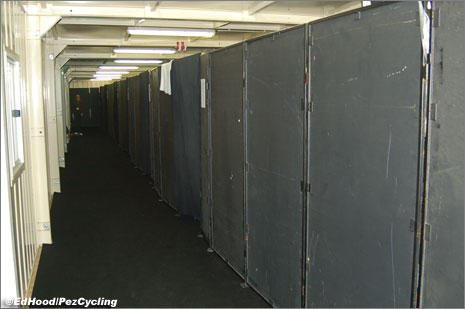 As Ed so eloquently puts it: brothel-style.

It’s Flanders in November, so the steel box is freezing; electric space heaters blast constantly. There’s no running water in the cabins, but there are portable toilet and shower blocks a few metres away – it’s not glamorous and it is entirely the wrong environment for athletes to be in. 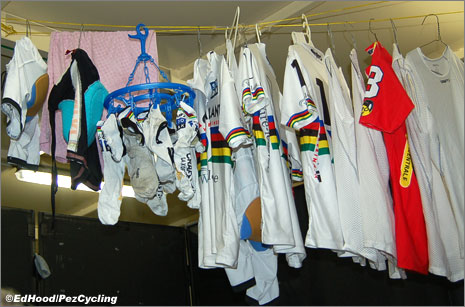 Last night, when we went for our first look at the track; as we walked under the section of the banking which hinges up for access, there was the rumble of brick hard tubulars on hardwood, above us – I got goose bumps!

Michael Morkov arrived last night; he drove down from Luxembourg, where he lives, now. His thighs are around twice the size I remembered from the first time I worked with him at Grenoble, four or five years ago when he was a ‘yong rider’ as they say here – now he’s a world champion and riding for Saxo Bank. But he’s still the same unpretentious young man that pays for pizza for his soigneur and runner – thanks Michael ! 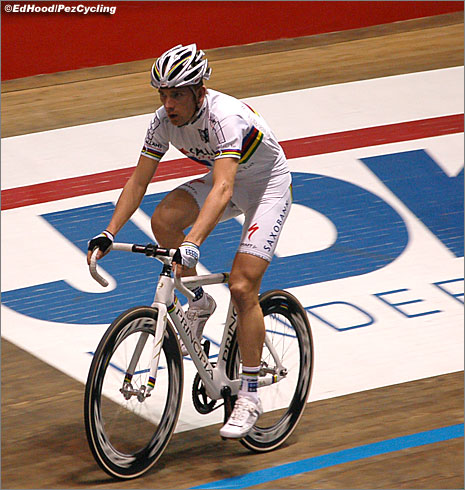 The race started tonight (Tuesday) so there were rituals to observe. First up was the shopping, the butchers, bakers, and green grocers are all just down from the track on a street that’s Viktor, Dave, and my main thoroughfare to Iljo’s dad’s bar – de Karper, on our trips to Het Volk, the Belgian champs and this very six. It was a strange to be there in the daylight – and sober !

Then it was time to set up our little track side cabins. Space is at a premium here; there’s no point in wasting space on us when a man with a pils in each hand could be standing there. 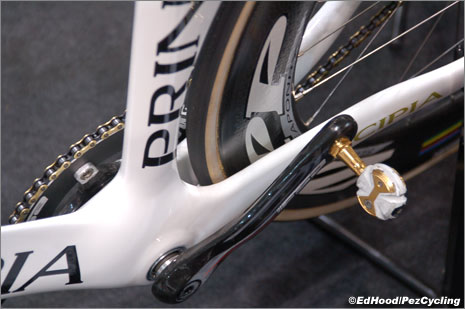 That is a fine looking piece of machinery.

Dirk the mechanic has Alex and Michael’s lovely white Principias and Iljo’s cool Merckx bikes to tend to, right beside us – it’s cramped, alright. 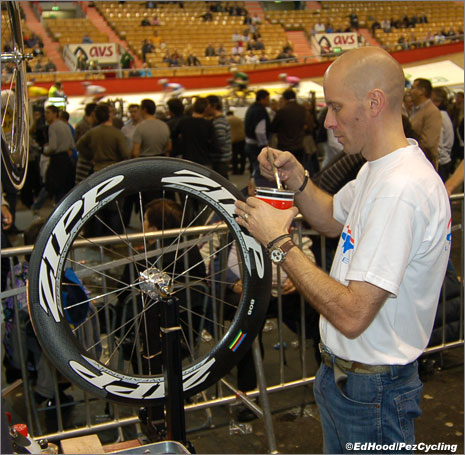 A mechanic’s job is never done – especially when it comes to wheels.

There are a lot of little things that have to be done – like borrowing the heated machine that applies the little Saxo Bank logos to Michael and Alex’s jersey. 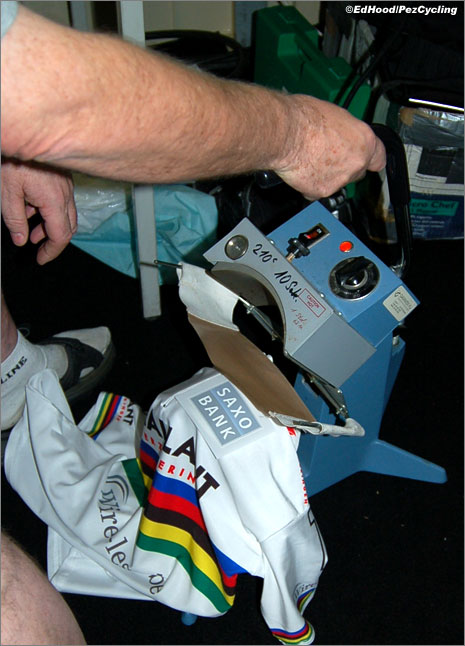 SaxoBank gets its just addition to the jersey.

Whilst it’s freezing in the cabins, the track is roasting – hot air blasts from ducts around the track perimeter, there are boards over them but the hot air still escapes to give a sauna-like atmosphere.

Rick Astley tells us that he’s ‘Never Gonna Give You Up,’ as the U23’s hit the boards – literally; teams 12 and 13 are on the wood within a couple of minutes. 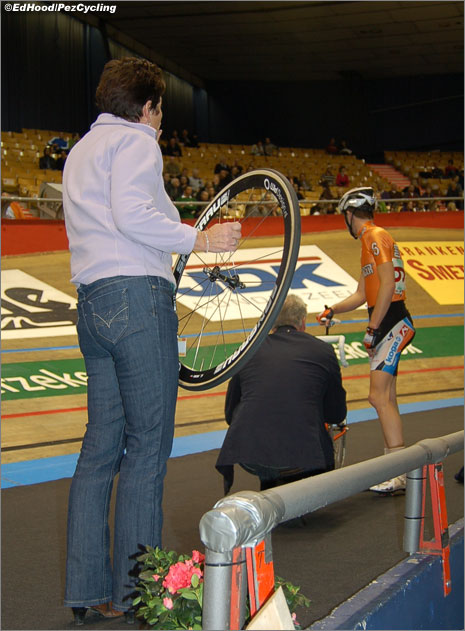 Things are a little different at the U23 level – Mum is the mechanic.

It’s a good field for the U23s, including Australian world junior madison champions Alex Carver and Scott Law – they are head and shoulders above the rest, ending the night two laps clear. Britons, Luke Rowe and Jon Mould have a good night, ending in third place; Olympic team pursuit champion, Paul Manning is their mentor. Do you miss racing, Paul? “Not really!” 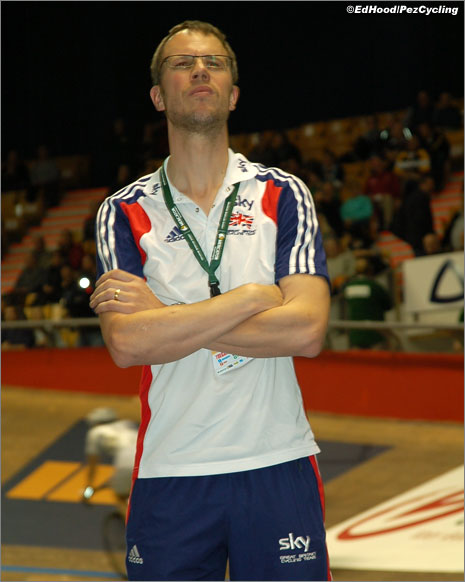 We’ve drawn the short straw on the track side cabins – right at the end, beside the entrance. It would be easier working out in the street.

Iljo appears, trailed by journos, TV, radio and photographers – some one said to me that it’s not important if Iljo rides at Gent, the fans would come to see all the other cyclists – yeah, for sure ! 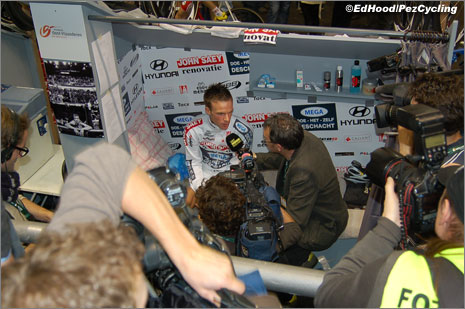 Iljo gets a wee bit of attention from the home media and crowd.

Iljo’s partner at Grenoble, Gianni Meersman pays a visit, looking like a male model – for teenage clothes, that is. 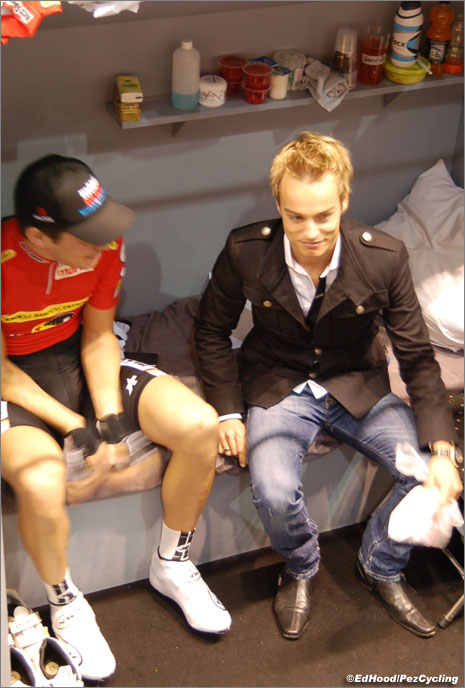 The big moment grows near.

There’s a prolonged round of loud applause to the memory of Dimitri De Fauw; the speaker counts down; five times Gent winner, Matt Gilmore fires the pistol; Bob Sinclar’s ‘Love Generation’ pumps out – and the 69th Gent Six Day is in full effect. 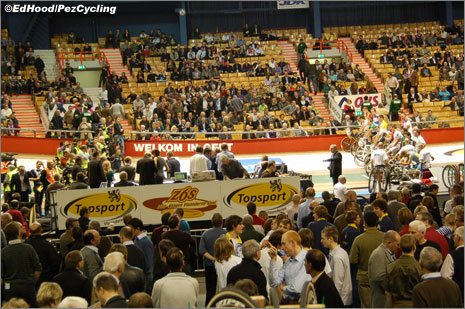 Almost time for some bike racing.

Points race first, then a devil, then the flying lap; you can arrange a lot of things, but not time trials – those digital watches and timing beams don’t negotiate.

Franco and Bruno 8.77, but Michael and Alex are the time trial kings and they start last as number one team; Alex is rapid – but . . 8.78. Franco laughs as he sees the time, he’ll be ribbing the young Danes about that one!

The first chase, it’s for real and some teams are floundering already, losing six laps in 45 minutes plus ten laps. Alex and Michael win; Alex is the sprinter but Michael goes over the top of Bruno and Iljo on the last lap to nail it; ‘nice!’ I say to him, as I towel the sweat off; he smiles; ‘you liked that?’

Dernys, the noise and the fumes make the air even heavier, Franco yawns; ‘a sure sign of lack of oxygen’ Kris tells me. 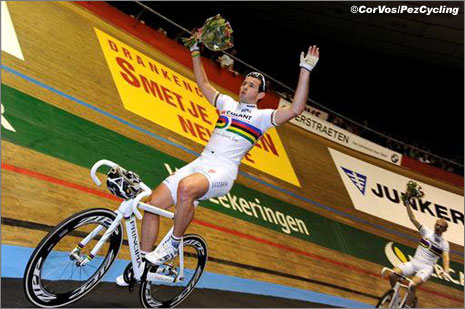 Flowers were the order of the day for Morkov and Rasmussen.

We’re way past midnight now and Dirk is still sticking tyres on.

Bruno and Franco take the closing chase, more flowers for the cabin. 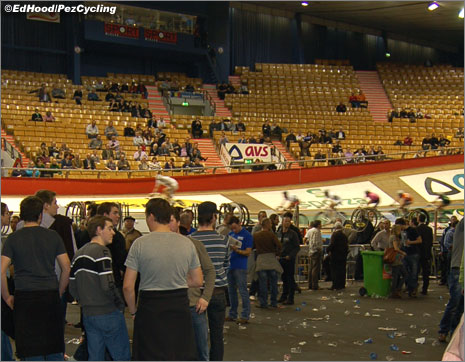 As the clock advances ever forward, the crowds thin, but even as the wee hours of the morning take hold, the track is still well-occupied.

As I hump the gear down to the cabin, the crowd has thinned, but the hard core guys are still handing over their beer tokens. As long as there’s a man needing a pils, those bars stay open – don’t you just love Flanders ?